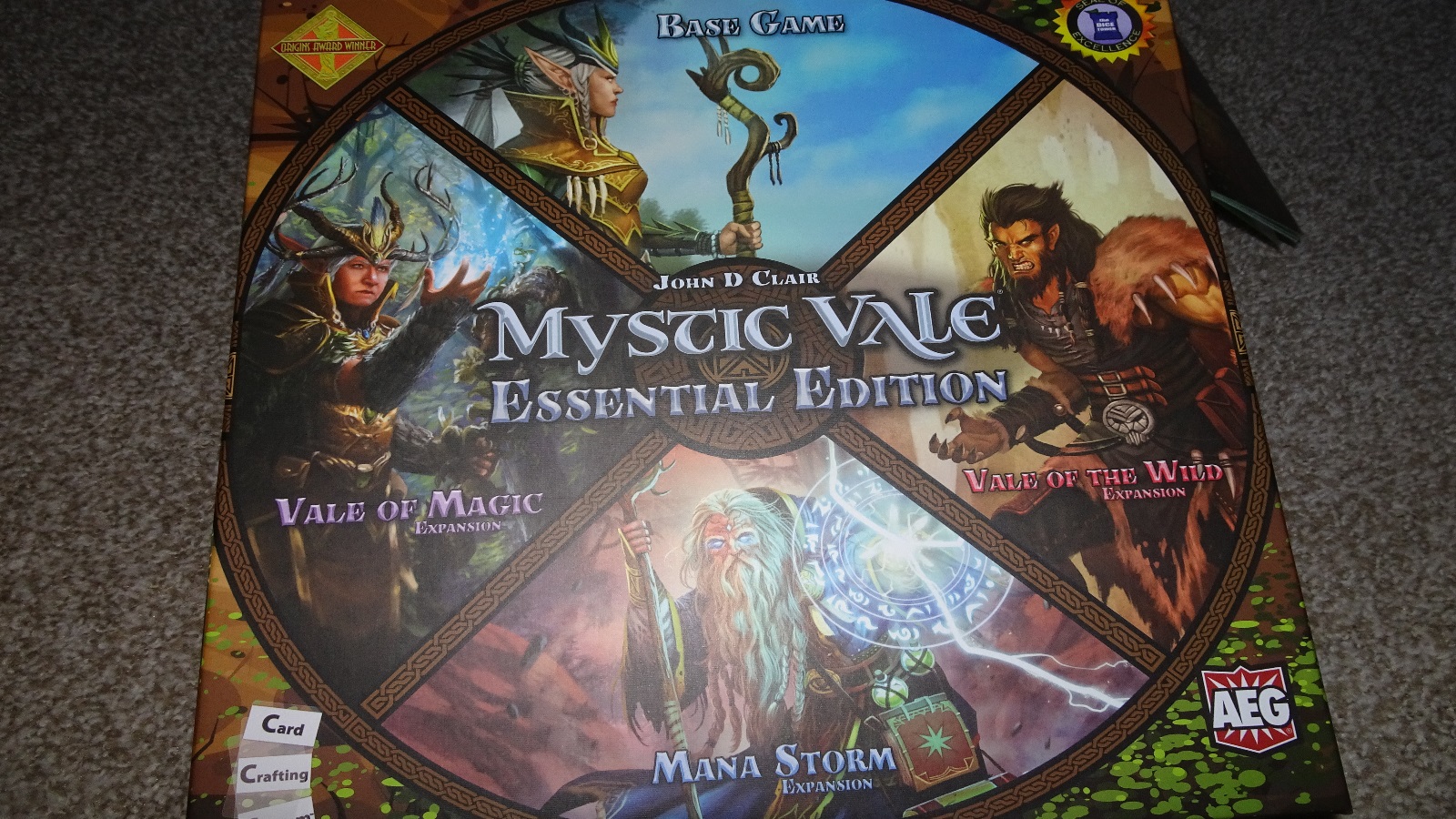 Mystic Vale: Essential Edition is a 2-4 player game where players slowly modify their deck by modifying their very cards through see-through inserts that ‘over write’ the card through their so-called “Card Crafting System”. This Essential Edition contains the base game as well as the first three expansions, as well as a storage box and a much needed play mat.

While the box is of average size, it’s very dense because there are a lot of cards packed into this game. From the very beginning of opening the box, the presentation is pretty solid. The game comes with four huge stacks of wrapped cards, which gratefully comes with a label on the front about not to open until you are ready for the new expansion’s content. While they do give some dividers, one slight nitpick is they are too small to really be useful.

Gameplay starts simple enough, each player starts with a deck of the same 20 cards of which is a mix between blank, a few negative, and a few small positive cards. On a turn, a player is flipping cards which randomly generate ‘mana’ based on what is on them to be spent on upgrades. The amount flipped is determined by the amount of negative symbols called ‘spoils’ come up, once 3 pop up the action pauses. Players can choose to push their luck and continue flipping, with the purpose of trying to squeeze out a few extra mana, with the downside that if a fourth spoil pops up, you lose everything. 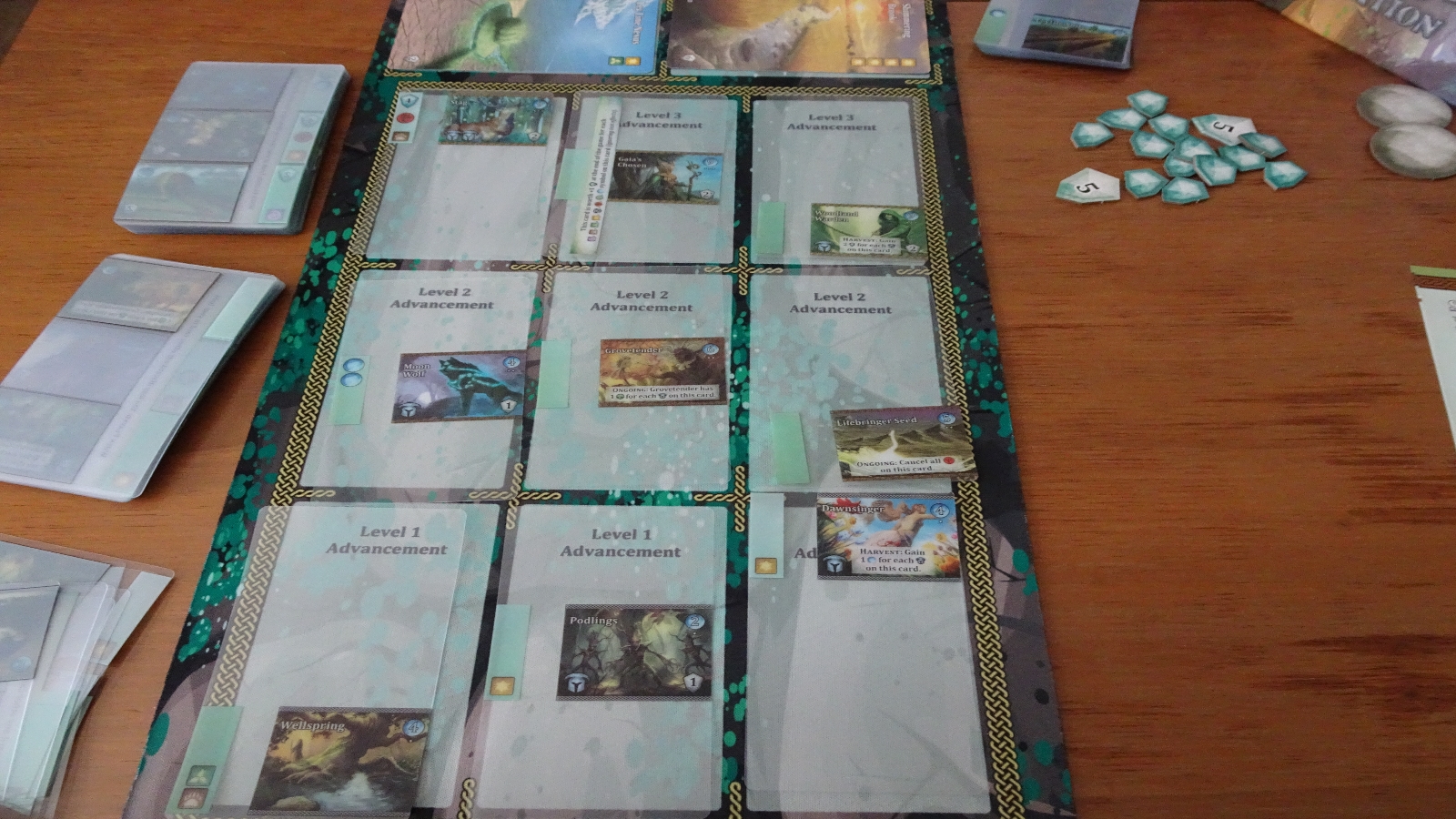 From here, assuming the player does not bust out, they can use mana as a one-turn currency to buy card boosters. Here is where the core of the game comes in. A card is composed of three separate sections, a top, middle, and bottom. On the playing field are a few random cards of various costs, all doing slightly different things. These can range from simply giving you more mana, such as crafting some of the blank cards into more and more powerful mana farming cards. Others might be about generating points, or giving spirit tokens, or some of the late cards outright cancel a few of the spoil symbols.

As you might be figuring out, the key of the game is what way to build your deck each play through. One strategy may be to go for victory points, so while there might not be a lot of cards being flipped each turn, single card or two can generate a lot of victory points. Others might go for canceling spoil symbols so that on a single turn a player can often go through a sizable portion of their deck and get a lot of mana to spend.
One of the other keys is that certain cards generate spirit tokens, which are another type of one-time resource generation, of which can be spent on the titular ‘Vales’. Essentially these are locations with great artwork that mostly generate victory points. They are not needed to win, but rather another path to victory that players can pursue. 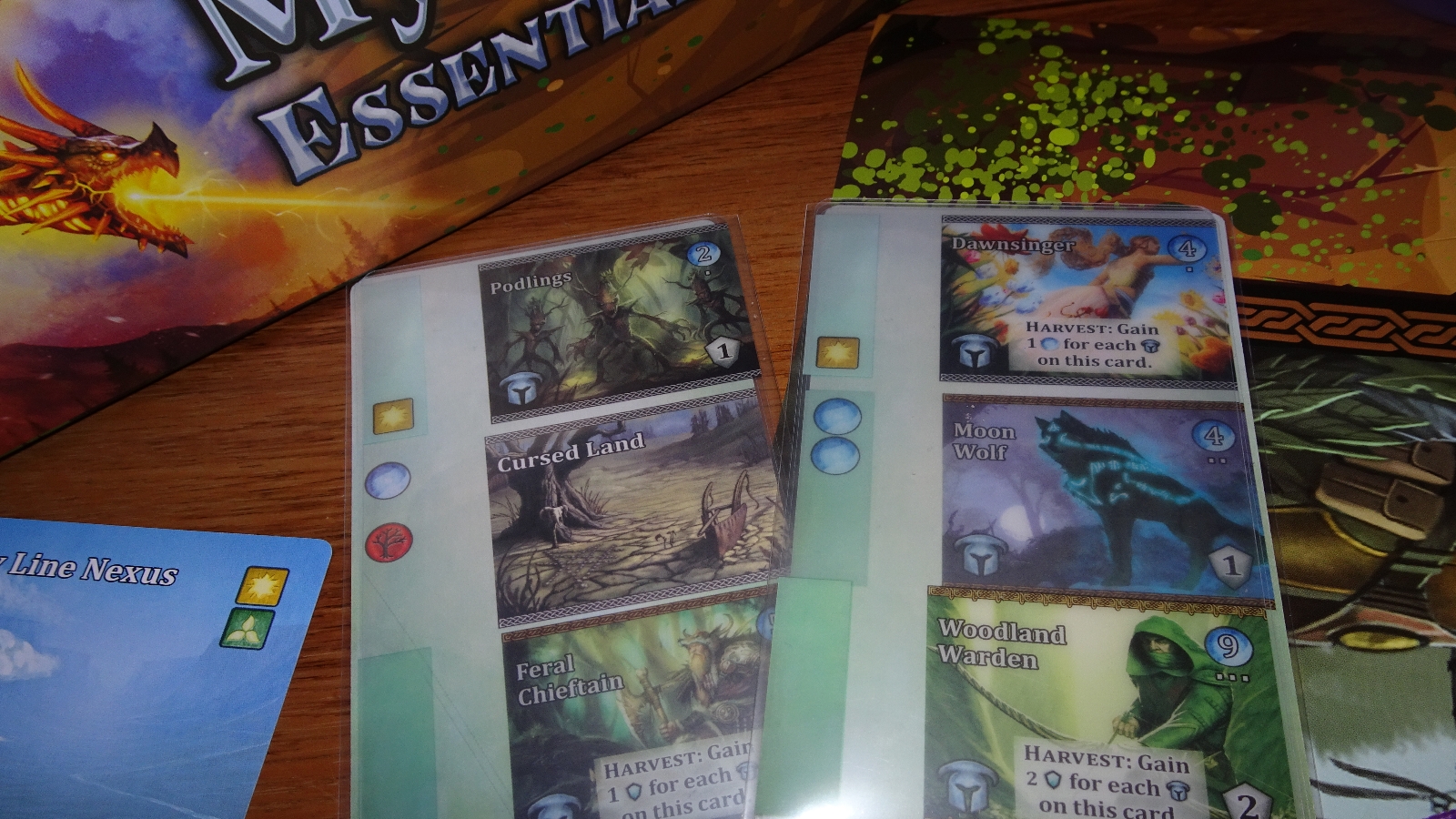 The theme and art of the game are very good, and really cool. The idea of taking this land and slowly making it more and more magical and fertile as the fields become more productive as mystical guardians start to come as well feels very cool. Pretty much across the board, the art on the vales are all very well done, the only slight criticism is that they don’t get too much action. They mostly sit there for most of the game, someone scoops it up into a pile, and that’s the end of it.

This last part gets to one of the criticisms of the game, not that much player interaction. For the most part players simply do their own thing, playing cards, and eventually deciding whether to push on, or call it good. The only interaction at all is potentially buying a card someone else was eyeing, but with 10 cards available at any time it does not happen that often. Further, people often go separate directions so not too often are there even cards desired by the same person. The rules even outright tell players to set up their fields right up until the ‘push’ section of the decision. This is unfortunate as one of the pleasures of the game is seeing how other decks evolve and watch what happens to other players. 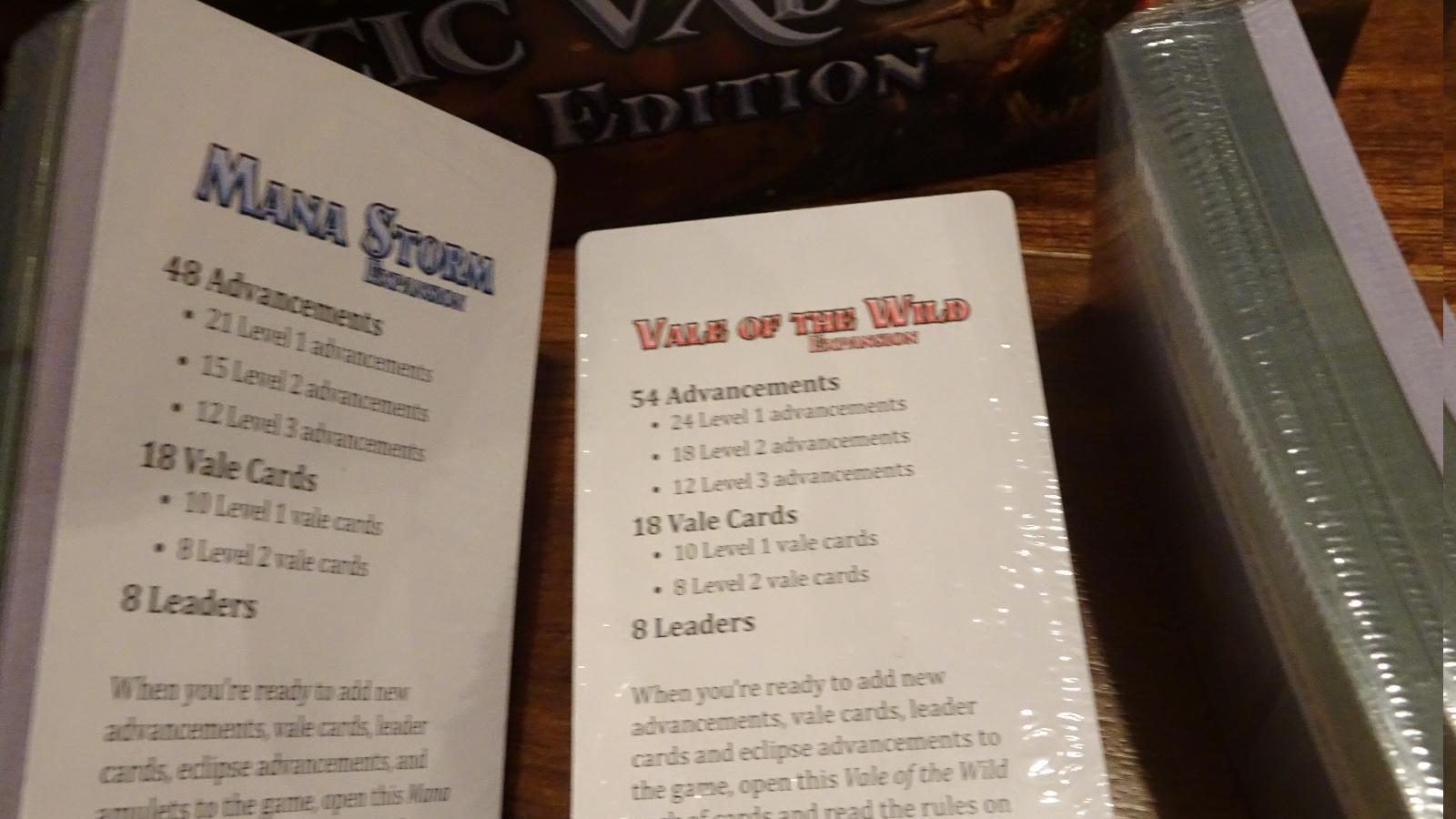 Some other issues are present, like mentioned the organization is a little rough, there are a lot of different cards all of which are hard to separate. For example of the card crafting ones, there are three levels, delineated only by three small dots in the corner. When the game is over, the tear down of the decks is a somewhat long process that detracts from the experience. Every card carefully crafted has to be ‘uncrafted’ so to say back to its original state, looking for those little dots and putting them in the right pile. While the ‘push your luck’ is intended to be a core part of the experience, the cost of busting is often so high that people simply get to the three, and stop. As a result one of the key decisions that are supposed to be present feels muted.

The expansions adds some good content in the form of expanding the main gameplay, not really adding anything too new. There are leaders which essentially act as a decent bonus to be used on occasion, or there are spirit tokens that likewise give a bonus now and then. So, while it expands on the good parts of the game, they do not address some of the slight flaws the game contains. While there is a lot of cool new content, fundamentally the core game does not change much which can lead to some longevity issues as it mostly just feels like a single-player deck building experience.

The overall package is solid, the art and theme are absolutely on point for a druid/fairy/eco theme game. It is fun in the mid to late game as the decks come together seeing how many more points and cards get flipped. The load of different types of cards to keep track of makes setup, tear down and organization heavier than the generally simpler game. The game desperately needs more player interaction as it’s mostly a solitary experience.