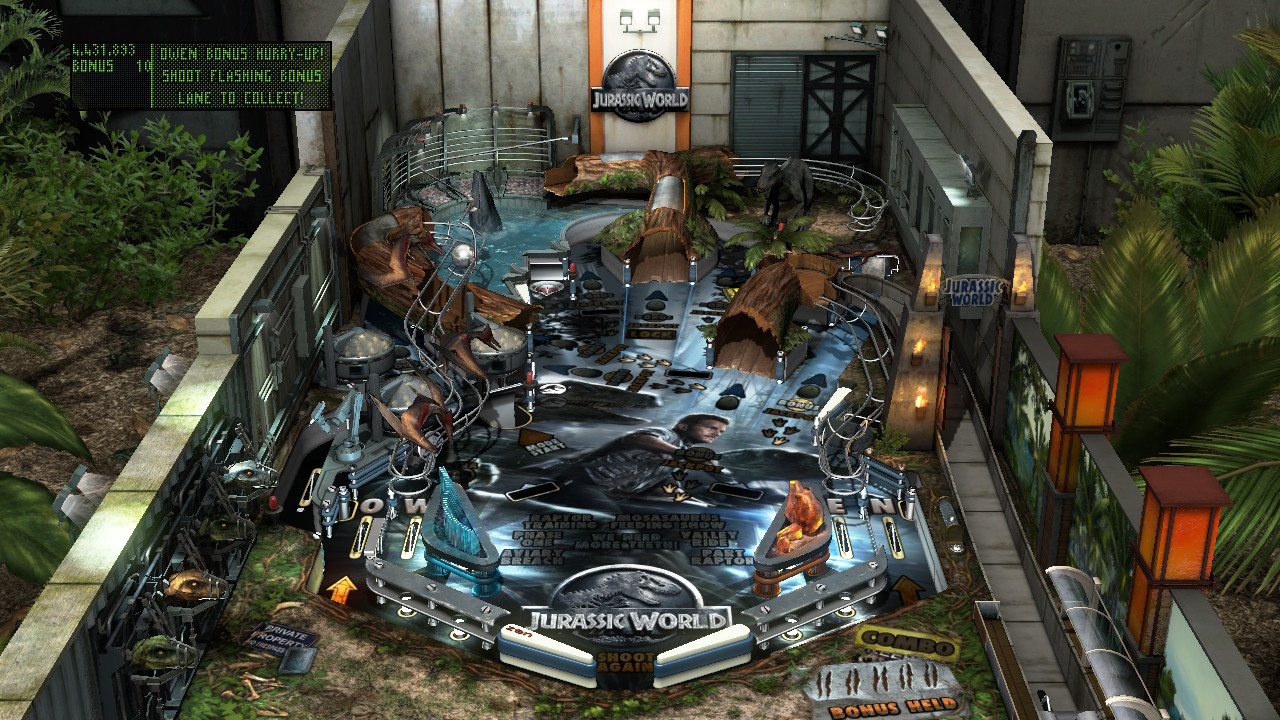 Before getting into the Jurassic specifics, let’s do a quick run-through for any newcomers. Pinball FX3 is like your typical pinball game but has its own extra features that affect the gameplay. Before playing a game, you have the option to activate two passive upgrades and one wizard power. Upgrades can help your score increase faster while wizard powers can slow down the ball or even rewind time a bit to retry something. These abilities can be unlocked as you level up and work towards mastering the tables. A part of unlocking them involves getting a specified amount of stars in each one of the three challenges on that table. In addition to single player, you can also play locally with friends in Hotseat, play competitively online, or even host or join tournaments online. One of the unique features is being able to flip the screen and play vertically in handheld mode with the press of a button. This makes it feel more like you’re playing an actual pinball machine since it mimics the shape even more.

When choosing one of the three Jurassic tables, you can look at the table guide before playing if you want to find out more about the table. This page shows you the different scenarios that can be activated and also explains how to make them happen. This is helpful for those who want to complete all of the objectives in a table.

The first of the three tables is based off of the original Jurassic Park film. The table is full of iconic set pieces such as the giant double doors, the T-rex, and the jeep on a dirt road in the background. Some of the events you can activate are the opening of the double doors, causing the jeep to slowly drive by hitting a specific spinning coin, and hitting some kitchenware to distract the raptors. Throughout your playthrough, lines from the movie will be played alongside things being triggered. For example, hitting the doors to make them open triggers “Do you have King Kong back there?” The T-rex will roar randomly as the ball passes by it as well. Upon getting a game over, you get to hear a line directed at Hammond about not wanting to endorse his park. Don’t worry, we also get to hear “Welcome to Jurassic Park” as the camera pans over the entire board as you’re starting your game. This was a perfect use of an iconic line, and that camera view makes it even better.

The second table focuses more on the chaos and evacuation aspects of Jurassic Park. Taking this into account, you are able to choose a “starting location.” Depending on which one you choose, there will be different effects; the effects are stated below the location in order to help you decide which bonuses you want. Visually, your decision makes no difference. Based on where you hit the ball, you can choose missions, which cause different things to occur in-game. For example, if you hit the Stegosaurus’ tail, you can make it smash the ball through nearby windows. The goal of this is to try and hit raptors that appear in the windows for extra points. You can also cause a helicopter to come survey the area, but it will be attacked by the T-rex. At this point, you want to hit the T-rex to save the helicopter. One of the unexpected situations was hitting the ball into a magnetic crane captures the ball. This doesn’t hurt you; in fact, if you hit the captured ball with your new one, you’ll activate multiball. This adds more challenge, enjoyment, and even the opportunity to increase your score faster.

The final table is based on Jurassic World, which was personally my favorite table of the set. Before playing, you must choose to either have scenes play out in film order or have them be selectable. This affects what events can be activated and when they can be activated. Personally, I opt for selectable events, as that allows for more freedom to see more of what the table has to offer. A nice touch is whenever the ball rolls over the Mosasaurus’ tank, it will come out of the water to try and eat the ball. Don’t worry, the ball won’t actually get eaten. You can also activate other scenarios such as the aviary breach and raptor training. The raptors are locked up with muzzles the entire time, but once you trigger raptor training, their heads will pop out of the table instead. You are tasked with feeding the ball to the designated raptor and must work your way through all four. If the ball is lost, the training stops, and you must trigger the event all over again. Throughout this scenario, Owen will be talking to the raptors, which immerses you into the situation even more. Occasionally, you will hear Gray say “I can’t wait to tell mom about this,” and then hear Claire reply with “You cannot tell her anything about this.” The inclusion of movie lines like these add to the atmosphere that the table is going for.

All three of the Jurassic tables are unique in their own ways and offer their own interesting situations. The tables are carefully designed and the amount of detail put into them is clear. None of the tables feel too similar to each other and that will make you want to spend time with all three of them. The inclusion of dialogue and dinosaur noises does enough world building to bring the films to mind without overwhelming you with constant references. When you trigger events, they are enjoyable to take part in and watch, but at the same time, Pinball FX3 makes sure that it doesn’t distract you from the game or have the game distract you from the events. This is a great combination of pinball and movie tie-in.

Pinball FX3 shows that it has what it takes to make great movie based tables, especially when taking on the Jurassic films. The Jurassic table set is a great trio of tables that allow players to not only revel in the nostalgia of the original film, but also jump into the world of the more recent addition to the franchise. The tables work perfectly and the desire to trigger scenarios keeps you playing with those goals in mind.

Codi loves to play video games and watch movies. He will watch almost any kind of movie just to experience them. His ideas take inspiration from the shows and movies he watches, and games he plays. He also loves a good pun.
Related Articles: Pinball FX3, Pinball FX3 - Jurassic World
Share
Tweet
Share
Submit