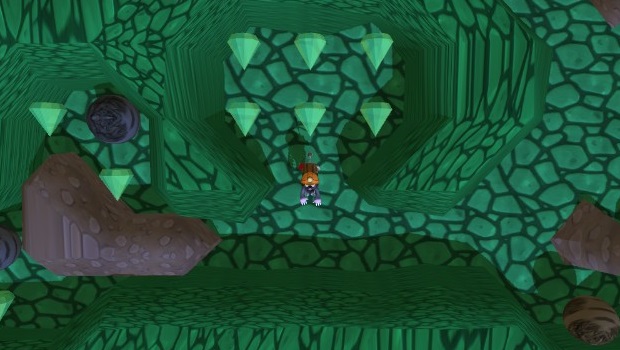 I went into Miko Mole with a bit of optimism. “Hey, it’s a new game. That’s never a bad thing, right?”

Maybe the graphics should have tipped me off from the start. They look like they could have been done in a mildly ambitious Nintendo 64 game. I’m not one to judge games by their graphics, but when the first thing that greets you is a splash screen that’s antiquated and low-quality, perhaps one should ask questions.

Undaunted, I jumped into it. The entire story of the game is that there’s a company literally called Evil Corp, and Miko the mole likes to steal diamonds from them. That’s it. He’s not looking to take down Evil Corp (who doesn’t seem to have anything marking them as “evil” besides just their name—for all we know they could just be a normal company with a strange sense of humor, like Hulu). He’s not trying to help anyone but himself, and there’s nothing to suggest that he has to steal because he hasn’t had any good opportunities in life.

So you’re not playing for the story. But you don’t play Super Mario games for the story, either (except maybe the Mario RPGs)—you play for the quality gameplay. Might we find a similar thing going on here in Miko Mole?

As I entered the first level, I immediately discovered that the sound effects were rather grating, and the forgettable music was playing in an irritatingly short loop. You have to gather a certain number of diamonds and then find the exit on each level while avoiding such dangers as bats and falling rocks. You have no weapons or tools of any kind. None of the buttons do anything, except the Start button, which pauses the game. The only thing you can do is move, and the movement controls feel sluggish and loose.

Trapped between a rock and a bat…now I know what the Joker feels like!

Even that might be tolerable if the level design and enemy programming were excellent. Would you like to guess whether they were?

If anyone guessed “Yes,” I can say with some degree of certainty that they have no idea how to recognize a pattern.

Enemies spawn at random points within a given area and have randomized movement patterns (including, occasionally, a complete lack of movement). Often, there’s only one route forward, and sometimes enemies will spawn at the narrowest parts of that route, making it impossible to get past them. I would often find myself just sitting in one spot saying, “Please move. Please move. Please move.” And sometimes they don’t. When they don’t move, you’re just SOL—the only thing to do is restart the level and hope the enemy has a movement pattern this time.

In one tunnel, I pulled out my phone and scrolled through Facebook and Twitter for a good 15 minutes while waiting to see if an enemy would move. But it didn’t. When I tried the level again, I tried to maneuver around the enemy, but I couldn’t—there simply wasn’t enough space in the tunnel to move forward while staying outside the enemy’s kill radius. And everything kills Miko in one hit, so I couldn’t just damage-boost through the enemy, either. After about five or six tries, the enemy in that location finally had a movement pattern, allowing me to pass. This element of chance adds nothing but frustration.

The bat didn’t budge an inch for 15 minutes. Then I tried moving past it, and it devoured Miko in one bite.

Sometimes, it wasn’t the enemies but the falling rocks that made levels unwinnable. Admittedly, getting into situations where fallen rocks would block your path was avoidable, unlike the enemies. But your ability to move rocks after they’ve fallen is very limited, and you can’t reset them without restarting the whole level. If you get into a situation where there are more rocks than you can move in a space too tight for you to maneuver around, you just have to restart—there’s nothing to help you. But at least in this case, if you get stuck more than once, it’s on you. The falling rocks are also somewhat unpredictable sometimes and occasionally fall on Miko’s head without warning, killing him instantly.

Which brings me to the one positive thing I can say about this game. (I don’t enjoy complaining. I really don’t.) If you manipulate things so that a rock falls onto an enemy, both the rock and the enemy are destroyed, and it feels so good to watch it happen. (Think Dig Dug.) But when the most satisfying part of a game is causing the destruction of the two most common level design features, that’s a problem.

But surely a primitive game like this one would at least—

Nah, I’m not even going to suggest an expectation of a stable framerate.

The larger levels had severe framerate drops. Notice that I said “larger,” not “large”—the biggest they ever got was about four screens worth. Banjo-Tooie had much bigger levels with a more stable framerate three consoles ago in 2000 than this game has on the Wii U in 2017. The Wii U may not be an especially powerful system, but it’s more powerful than the Nintendo 64. And this only exacerbates the problematic movement controls. Sluggish, loose movement with framerate drops in a game that’s supposed to be all about precise movement? Really? There is simply no excuse for this. Is this the work of Evil Corp?

And after 40 levels of this garbage (all with the exact same music), just when I thought it was over, I find out there are several more worlds of this with 40 levels each. I gave the next world just enough of a chance to see if it was drastically better than the first. No points for guessing that it wasn’t.

While writing this article, I was surprised to learn that this game was released for PlayStation 4 in 2015 and Steam in 2016. Even more surprising, the Steam version actually got some good reviews. Maybe this is just a bad port.

Miko Mole is a disaster. Someone would have to pay me to play it again. Antiquated graphics, annoying sound effects, forgettable soundtrack, poor level design, iffy controls, and a complete lack of story make this not a last hurrah for the Wii U but rather a dying gasp.

Kyle is an unashamed longtime Nintendo fanboy. Some of his earliest and fondest memories are of playing Super Mario Bros. 3 on the NES with his grandmother. His favorite series are Fire Emblem and Metroid. Outside of gaming, Kyle is also a serious Whovian, favoring the Seventh Doctor and Ace as his preferred Doctor and companion. He also loves superhero movies, power metal music, and basically anything in the space fantasy genre. Avatar by Smashley (@SmashleyDraws on Twitter).
Related Articles: Miko Mole
Share
Tweet
Share
Submit