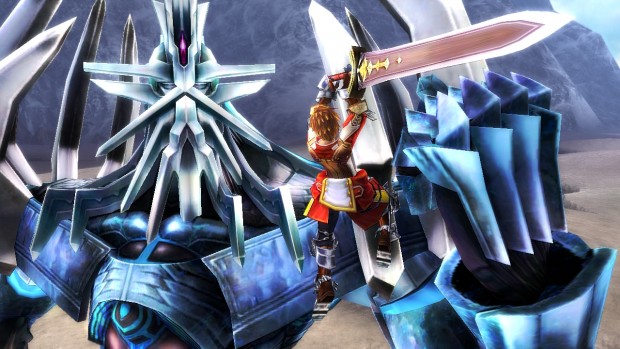 When Dragon’s Crown was released on the PS3 and Vita, it was a pleasant surprise. The RPG featured several different classes, accessible but deep combat, and the ability to cross save between the PS3 and Vita. When I had heard about Ragnarok Odyssey ACE being another action-RPG with the ability to cross save, this piqued my interest to check it out, even though the third-person perspective was much different from the side-scrolling in Dragon’s Crown. I would soon find that these two titles would have more differences than similarities.

Upon entering ACE, I found that the colors were bright and vibrant, an improvement over the typical brooding protagonist living in a dark and stormy world. The six available classes looked very different from the typical warrior, thief, wizard, and archer. However, after playing some of them, they just had a unique look to what would be considered typical classes.

After choosing a class and customizing your character, you find your character in a hub where you can get quests, talk to villagers, buy and sell equipment, and change his or her appearance. While you will need to visit certain locations at least once, you can deal with them from the central location without running around to retain their services.

Ability cards are items you attach to your armor to gain extra abilities, like increasing your hit points or reducing your vulnerability to poison. You only have a small number of slots available for these cards, so you will want to choose wisely which ones you equip. You can visit the armory to have you clothes changed and have more slots put into your clothes to equip more cards.

Once you start a quest, you are transported to the location and start fighting against monsters. The areas you travel through are short, making the maps you travel across seem small and choppy. The enemies you fight against are relatively easy, defeated with a simple combo. You can pop them in the air and constantly attack them until they are defeated, extending your combo count. The quests sound interesting, where you will collect a few items or explore an area, but in the end all you are really doing is fighting your way through a set of monsters in an area. It would be a little more interesting if said monsters were more varied, but they appear in the same place every time.

While most of the monsters are easy to defeat, at the end of each chapter of quests a boss fight occurs. These require thought and tactics that make your previous fighting skills feel useless. They seem out of place after the cake walk you went up through to the point of getting to them. If boss battles like this frustrate you, then you’ll definitely want to take a pass at this game.

As you get later into the game, you can have others online join you in the monster hunting. While that is helpful if you want to go online, if you want to play offline you can hire mercenaries to assist you. Some of the later levels do require some assistance, and having mercs available at a whim is great for those of us who can’t plan in advance.

You start out in a single-player mode where you are kept offline. Eventually the online abilities are unlocked. However, there isn’t any story to keep you emotionally vested in ACE. You can talk to a few NPCs throughout your adventure, but no real reason for why you are fighting is explained.

I received both the PS3 and Vita versions for the purpose of this review. I will say that I think that the cross-save ability is one of the best features to come out of modern gaming. If you can only get one version, I would recommend the Vita version. While they both play the same, the touch controls for potions and abilities gives it an edge. Graphically the Vita version shines much better as well. The PS3 version loses the crispness and causes the environment to look blocky.

Not all action RPGs are alike, and maybe my expectations of Ragnarok Odyssey ACE were too high after playing Dragon’s Crown. However, the small environments, the simple combat, and monotonous gameplay wore me down rather quickly. This would have been much better as a Vita-only release since the shortcomings stand out on the PS3. If you are on the move and like the monster hunting taking precedence over story, then you can probably find yourself enjoying ACE. If you want a story and more variety in combat, I would suggest looking elsewhere.