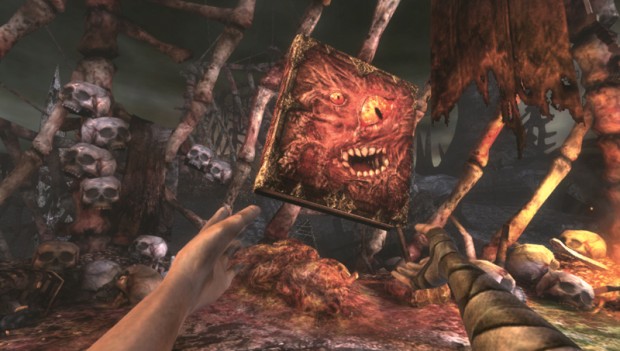 I tried to like Soul Sacrifice. I really did.

It has a lot of great ideas — some weirder than others — but it takes more than some crafty gimmicks to create a cohesive experience. Ultimately, that’s where Soul Sacrifice falters — its disparate elements never coalesce into a truly entertaining game.

Set in a weird apocalyptic fantasy world where sorcerers absorb the souls of defeated targets into their right arms (until they themselves are consumed), Soul Sacrifice dumps us into the story in media res, as we find ourselves the prisoner of Magusar — an evil sorcerer with unclear, but malicious, intentions. We’re not exactly sure what got us into a giant cage made out of bones, and the only hope in figuring out how to escape comes in the form of a talking book bound in human flesh.

[singlepic id=11916 w=320 h=240 float=left]Rather than presenting the level select or equipment screen as a series of menus, everything is tied to this book. The various monsters you’ll fight have entire chapters devoted to flavor text, and all of the various bits of story that are drip-fed to you over the course of the game occurs on the pages of text in between levels. It’s a really neat idea, and one that actually ties into the gameplay in a really unique way.

Every story that you relive in the book (or mission, in video game parlance) has to play out in a certain way — technically, if a character dies in a mission, they’re supposed to be dead forever. But, by spending an incredibly finite resource known as Lacrima, you can essentially rewrite bits of the book and make it so they never happened. If you use one of your Black Rite abilities, for example, you cause a huge amount of destruction, but your defense is permanently scarred. Or, say you sacrifice one of your items too much within a level to harness the weapon within, it’s gone forever. But, with a little bit of Lacrima, you can pretend that those detriments never happened. The only problem is, that the more you use it, the higher the costs become. It turns into a very interesting game of risk-versus-reward, ensuring that you only use your special abilities at desperate moments.

Combat is largely your standard action-RPG fare. You’ll equip various items, each of which provides different uses on the battlefield — some heal, others become weapons, and still others buff your or your party’s stats. Pressing one of the action buttons turns the equipped item into it’s intended purpose — mashing or holding that button will cause you to use it. It never gets too terribly deep — you’ve only got one combo and one charge move per attack item — and most of the time battles are fought by rolling in, attacking a few times, and rolling away before being hit. Controls are responsive enough to manage most encounters, though the camera is a finicky beast, never locking on to the right target at the right time.

[singlepic id=11917 w=320 h=240 float=right]Sacrifice is the name of the game, and that’s exactly how your character grows in strength. You don’t gain experience in the typical “kill-baddie-level-up” fashion, but you’ll instead choose whether you want to save the enemy you’ve defeated (thus reverting it back to its original, placid state) or sacrifice it (essentially absorbing its life energy into your arm). Saving enemies increases your health and defense, while sacrificing them increases your magic and attack strength. You’re given one hundred levels to work with, and can either split them evenly or favor one over the other. You can even save or sacrifice your allies — either bringing them back to life or killing them to unleash a powerful blast.

This all sounds fine, but it’s the weird little things that keep it from soaring to greatness. There’s never a real sense of progression, as your average enemy will usually pose little threat, while bosses will always be a giant pain in the ass. I’ve leveled up significantly and gone back to earlier levels and still found myself taking forever to defeat the bosses. Levelling up never feels important, as all upgrades feel incredibly insignificant. Even gaining new items to use in battle feels unrewarding. After spending hours upon hours of fighting monsters, there should be new weapons, something that drives me forward to relish each new encounter. That moment never comes.

So if there’s no sense of battle progression to compel you to keep playing, then at least the story is there to pick up the slack, right? Well, yes and no. The story that’s told within the pages of the book is actually well written, and I was genuinely interested in keeping going (despite everything else), just to piece this puzzle together. But each mission takes place within a confined arena, and most of the time what you’re doing will have nothing to do with the bit of story you just watched. A chapter of the book has you looking for a specific person within a town. When the level actually loads, there’s no town, there’s no person — just a typical “kill X monsters” quest, completely divorced from the story, with zero context tying it together. It would have been nice to at least feel like the missions were more connected to the main plot, but more often than not, you get a throwaway line of dialog from your AI partner (“We must vanquish our foes” or other similar trite phrase) and a generic kill quest.

[singlepic id=11918 w=320 h=240 float=left]The mission types never evolve much past these simple kill quests either. Most missions require you to either defeat a specific number of smaller enemies, or take down a giant boss. Other than the occasional “find-the-items” quest, this is what you’ll be doing 95% of your time in the game, whether in the main plot thread or the numerous side quests, and in single- or multi-player. You’ll fight the same handful of enemy types repeatedly — and this includes bosses. Rather than getting more interesting, the bosses just end up hitting harder and taking more damage, which just means that it just takes longer to finally take them down. This would be fine if combat felt satisfying, or the missions had any bearing on the story, but it doesn’t, and they usually don’t.

I can see why people like these sorts of games — the thrill of mastering complex systems, felling mighty beasts with friends (or solo), or overcoming tremendous odds, is an enticing proposition. Soul Sacrifice tries really hard to replicate that feeling, and it does a lot of things right. It’s just a shame that none of it really comes together in any meaningful way.

I wanted to like this game — but there are far better, far more satisfying options for hunting monsters out there.