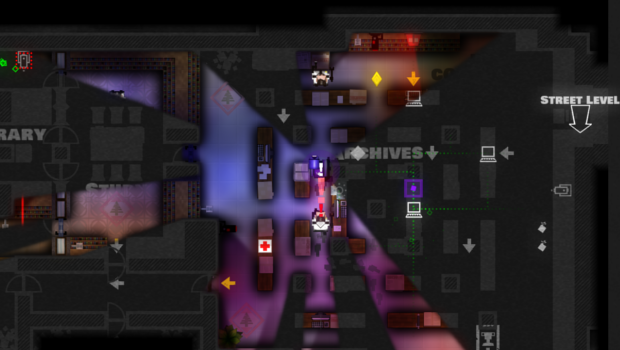 With Monaco: What’s Yours is Mine, Pocketwatch Games has pulled off a very difficult trifecta in the world of game development: they’ve delivered a title that’s unique, very fun and well-polished all at once. It is to the stealth game genre what Faster Than Light was to roguelikes and realtime tactical games – something fresh enough in concept that it’s truly hard to find another title to compare it to, but at the same time anyone playing it could appreciate just how damn good the title was. Not a surprise, considering how well they both did in terms of picking up Independent Game Festival awards. That sentiment sums up my feelings about Monaco, a title which not only offers up a well-crafted, satisfying and challenging stealth tactical experience, but hands it over with co-op play that rivals the Left 4 Dead or Killing Floor series in terms of how fun it is to play with friends.

Let me jump right to the heart of what makes Monaco a great game: the gameplay. As I said, this is a stealth-based title with a top-down perspective and a fairly weighty emphasis on co-op play. Now when I say stealth, I’m not talking about a Metal Gear Solid or Assassin’s Creed type of game where the stealth is a kind of secondary mechanic, the thing which allows you to kill much more efficiently if you so choose. No, stealth is the beginning and the end of the gameplay focus here – getting noticed by guards, tripping alarms or generally being clumsy will draw attention to your character and, if it doesn’t get you beaten up or killed, will at the very least make everything take more time and be quite a hassle. As a result, Monaco is very much a game about moving carefully, paying attention, and taking calculated risks. You’ll keep your eyes riveted on the screen as you wait for an opportune moment to slip past a patrolling security guard, and you’ll listen carefully for the sound of nearby footsteps. You’ll find yourself hiding in a restroom stall, hoping the gun-wielding guard outside doesn’t decide to open it up and raise hell for you. And you’ll grit your teeth as you watch your friend make a stupid move during a co-op game and light up the level with sirens, angry gun-toting guards or even a pack of security dogs.[singlepic id=11722 w=320 h=240 float=left]

It’s that co-op aspect of Monaco that really serves as the game’s major draw. Don’t get me wrong – I really enjoyed playing through this one in singleplayer, checking out the various levels and succeeding – or dying – all by myself. But it was the online co-op matches that made me realize where everything really comes together in this game, the experience that really justifies not only its purchase price, but the 4-pack deal it has going for it on Steam. Tackling a difficult mission with online teammates made me remember what I really enjoyed most about the Left 4 Dead series – the alternating experience of getting through a level with skill and team-based grace, and the moments where one person makes a wrong move at the worst time and an up-until-then smooth experience is thrown into utter alarm-blaring, security-guard-shooting chaotic mess. Pocketwatch is clearly aware that it’s the co-op which really makes their game shine – not only do you have the typical online options for the game, but Monaco also allows up to four players sitting at the same computer to team up and tackle these missions. Every character can be seen on-screen by everyone else at once, which also means that the guy who went and screwed up the whole mission can be immediately identified and summarily criticized for being bad at video games. Fun stuff!

The game also has a variety of character classes to play as both in co-op and singleplayer. Each of the eight different classes has a unique specialty on offer – the Mole can dig through walls, the Locksmith can pick locks faster than anyone else, the Gentleman can put on a disguise when he’s off on his own, and more. None of these classes are strictly necessary for any particular level as near as I was able to tell – there’s always some way to handle a given problem, get past a particular obstacle – but some are going to be more immediately useful than others in a given situation. On top of the character class variety, there’s also a selection tools that can be picked up during the course of the game: shotguns that can permanently end your ‘being followed by a swarm of security guards’ problems, wrenches that make any given character action (hacking a computer, picking a door lock, killing the electrical power) perform more swiftly, smokebombs that allow for a clean getaway, and more. These are things you pick up and find in a given level, rather than something you can equip and bring in straight from the character select screen. [singlepic id=11723 w=320 h=240 float=right]

The story behind Monaco involves a group of criminals – each with their own specialty – breaking out of prison together, trying their best to stealth, lockpick and hack their way into and out of the variety of touchy situations they find themselves drawn into. The story is pretty amusing to follow, but it’s not the draw of this game by a longshot – the plot exists almost entirely as a means to provide context for each of the game’s levels. Those twists and turns of story happenstance are what justify the various distinct situations Monaco throws you into, ranging from the initial prison breakout, robbing an embassy, escaping from a sinking boat, and even busting into a well-guarded high-class disco. That’s just a sample of the variety of environments you’ll find yourself navigating in this game, and it leads me to my first concrete bit of praise for the title: the areas the story leads you to truly do feel distinct. Their layouts are noticeably different from each other, the sort of obstacles you’ll face vary according to the area, and the general artistic effort and attention to detail in all these levels is fun.

As you can see from the screenshots, Monaco goes for a novel approach as far as graphics goes – a kind of pseudo-retro look, where everything has the blocky nature of an 8- or 16-bit pixel game, while at the same time being a mix of smooth edges, bright highlights and subtle (if typically dark) color choices. It’s a very abstract rather than realistic design approach, and while it manages to make Monaco a very visually distinct looking game, it’s still incredibly easy to tell just what everything is – especially whether something is an objective to pursue or a hazard to avoid. One of the big dangers of being very unique with graphical choices is that it’s pretty easy to end up with either an eyesore or a confusing clutter of images, and both pitfalls are avoided in this title. The audio also balances being rather singular for a video game – mostly owing to the focus on peppy piano numbers for the background music – while at the same time being effective. Music picks up in speed when you’re in danger, security guards yell things at you in what I can only assume is a combination of Simlish and French, and the various audio cues (nearby footsteps, grunts of interest from security guards who have noticed you, the sounds of animals you’ve startled and who may in turn attract others’ attention) are effective, easy to notice, and well-crafted.[singlepic id=11724 w=320 h=240 float=left]

There’s another design choice Monaco has going on for it that I just loved – particularly, the way unobserved portions of the level are handled. See, the maps in Monaco can be rather large, and certainly complicated. Everything starts off obscured by a fog of war, revealed as you literally shed light on it in the course of your stealth adventures. However, once you look at a given area, turning away from it doesn’t lead to a return of the fog – nor does it lead to a simple, static image of the map itself. Instead, you get a mix of a grayed out blueprint-style floor plan, complete with text describing what each of these rooms actually are. It’s not only a nice aesthetic touch, but a useful one – especially since coins and other tools/objectives remain marked on the blueprint once they’re seen, until they are claimed. Not being forced to slowly slog all over an entire level to find the last coin you know you saw but can’t remember the location of is a blessing, and makes the trophy-collecting portion of the game quite pleasant.

On top of all this, Monaco has something to offer both completionists and the more speed-run style competitive gamers. For the former, there are over ten Steam achievements to pick up in this game, and each level has four different trophies on offer: one for single-player level clearing, one for multiplayer, one for getting through the level unharmed, and one for collecting every coin in the level. For those who like to not only play a game, but play it better than anyone else, Monaco also has leaderboards both for single-player and multi-player records, as well as daily and all time scores. The scoring here is entirely focused on speed as near as I can tell, so if you’re the sort of person who loves to show off Youtube videos where you defeat a challenging game level in record time, good news – Monaco is right up your alley.[singlepic id=11725 w=320 h=240 float=right]

Monaco: What’s Yours is Mine is yet another game that illustrates just what kind of gems can come out of the indie gaming scene. It’s refreshingly original in terms of visual design, unique in its approach to the stealth game genre, and it offers a load of co-op fun that makes it an absolute steal at the default $14.99 USD Steam price, to say nothing of the price you get with the 4-title bundle option. Give this one a look, because so far it’s probably the best indie game to come out this year.