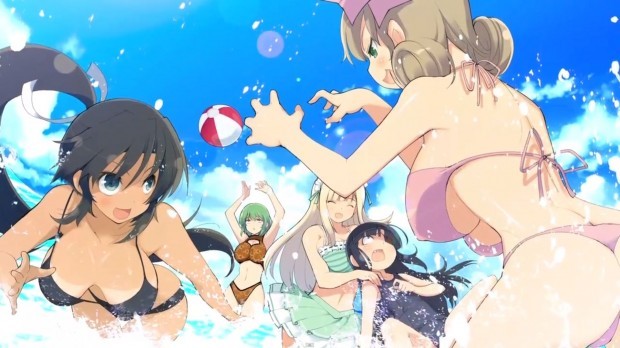 Senran Kagura Burst is a side-scrolling beat ’em up for the 3DS and the series’ debut in North America.  It’s an overtly sexual anime that’s set in a world that secretly trains high school girls with huge breasts the art of ninjitsu. The package actually contains two games: Senran Kagura and Senran Kagura Burst, and together they tell the story of two rival ninja schools. Players choose from ten sex-objects (five from each school) and hack their way through hordes of enemies. The endless fetch quests and time trials combined with the tornado of titties create one of the most annoying and offensive gameplay experiences in recent memory.

The elephant in the room is sex, which permeates every aspect of the title from the setting to the very game mechanics. Early on during my time with the game, one “character” lost her scroll (which characters store in their cleavage) and after a mission filled with killing ninjas, my character retrieved the scroll and gave the advice to the owner that she should “try pushing her breasts together” from now on to ensure it wouldn’t be lost again. Moments like this are at the heart of Senran Kagura Burst, which means that you’ll either be completely offended by this game, or if you’re like me, you’ll find it hilarious in the worst kind of way.

Everything in Senran Kagura Burst is a shallow excuse to show teenagers wearing different sexualized outfits and serve no perceivable purpose towards enhancing the game. For example, one of the major elements of the game is “clothing damage.” It’s exactly what it sounds like: as players are injured during a fight, they will periodically be interrupted with short cutscenes wherein their character’s clothes tear and shred until they come off completely. This mechanic does not affect gameplay except add motivation to take damage to people who want to see busty teenagers wearing nothing but her underwear during combat.

There isn’t really much of a story in Senran Kagura, because the main character is boobs. Each character is just a one-dimensional harem manga cliche and characters spend most of their time discussing their sweater-stuffers. Characters threaten to motorboat one another when angry, say they’re going to “get handsy” when they’re happy, and feel inferior when their knockers don’t look as huge as the next girl. Everything in the game takes a backseat to gratuitous close-up shots of jiggling spherical miracles. It’s probably worth noting that while this is the worst part of Senran Kagura Burst, it’s also the only time I had any reaction while playing, so good-humored people like me will get a kick from the absurdity of it all.

The gameplay in Senran Kagura Burst is an uninteresting  series of repetitive missions and button mashing. Enemies wander around and wait for you to kick them fifty times and then you walk to the other side of the screen to do it again. Most of the unlockables are new scanty new outfits from your character, although there are some new moves you can buy, but they have almost no effect on gameplay. The character customization is obscenely in-depth and it’s clear that the creators prepared to for players to spend a lot of time with that part of the game. But how will you know which outfits make your character’s boob jiggling look best? Well, because they put a button just for that, obviously!

Each level plays out similarly: You fight ninjas by button mashing and streaming together hundreds of attacks via aerial slaughter, then you power up your character and your clothes come off. Or you get hit too much and your clothes come off. Either way, you’re seeing some titties. Each character also has a magical ninja attack that unlocks once you kill enough people. The one that comes to mind is one character that makes a phallic minigun emerge from beneath her skirt and she starts blowing enemies to pieces. Enough said. There are bosses to fight–but they don’t really add much. They break up gameplay a bit, but they all follow predictable attack patterns and aren’t much of a challenge.

The graphics in Senran Kagura Burst are good at times, but inconsistent. During the anime cutscenes and short clothes-coming-off animations the graphics are quite good (they clearly put a lot of effort here), but for most of the game you’ll be looking at low-resolution characters, undetailed environments, and a sometimes-choppy framerate. The result is a presentation that feels lazy and half-assed.

I can only imagine that this game would be an enjoyable experience to a small, creepy population, and I imagine that this population will be disappointed anyway as there is no way to play the game with one hand. From the poor presentation to the shallow story and crass themes, there is very little to enjoy here. My thinking is that the creators of this game probably saw the 3DS as a great opportunity to show 3-dimensional gazongas, and they just kind of rolled with it from there. However, the game did make me laugh quite a bit just from sheer disbelief, so if you have money to throw away then knock yourself out…or buy this game. At $30 for a title that feels like very little work was put into it, I cannot imagine ever recommending an investment here.

Senran Kagura Burst offers players a maelstrom of mammaries and more innuendos that you can shake your stick at. However, the poor presentation and repetitive gameplay make the experience as boring as it is creepy.