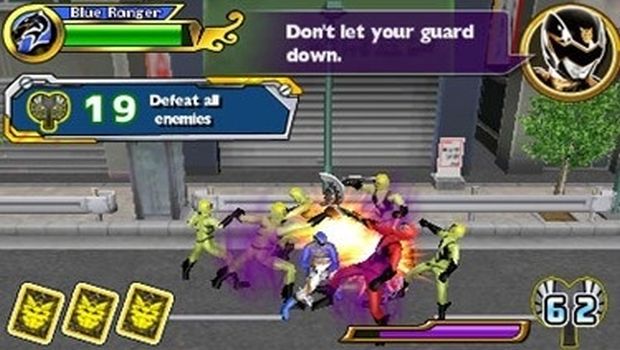 With the television series crossing the 20 season threshold this year, and consisting of more than 15 different stylistic themes, it’s safe to say that the Power Rangers franchise is a titanic institution of childhood entertainment. As such, the brand commands a legion of tie-in merchandising, including video games, running as far back as the series itself. Obviously, this is where Power Rangers Megaforce finds its niche, but also where it rests on its laurels so much it collapses under its own weight. This game isn’t trying to stand out, be noticed, or even be good. It’s just a another link in the chain, only existing to be connected to something else; Which for a small number of kids, might be enough.

But enough is the most a person of any age will get out of this dead-end investment. What Megaforce does get right are all the fundamentals any player of side-scrolling brawlers knows by heart. Clipping a wave enemies into the range of single attack? Check. Double jumping in and out of a boss and his minions attack area so you can lure them all into the scope of a big move? Check. So as far as hitting the lowest bar for its particular genre, Megaforce scores a bull’s-eye. Even if the most juvenile of modern game players don’t find such gameplay instinctual, there will be plenty of tutorials flashing on the screen just in case. Breaking up the action, and easing them into the leaking kiddy-pool of this title’s ingenuity.

As far as the stages themselves go, I haven’t watched the show, but I imagine (and hope) that the level design is referential to several of its locations. If not, the basic city, swamp, and alien mother ship palettes are all here, and modestly filled with the all the electrified fences, explosive barrels, and poisonous puddles you could want; ready to electrify, explode, or poison-puddle you if you wander too close or just have to, have to, get that extra coin. And trust me, after you chop down enough waves of enemy “loogies”, seeing what angle is the right one to jump and grab that coin is going to be really compelling.

So to that end, Power Rangers Megaforce is exactly what anyone who wouldn’t buy it would think. A mediocre cash grab aimed at the pockets of children, and by extension their parents, and whose existence will stand unaffected by its ultimate success or failure.

But if there is one — no, two things that I can’t forgive, it’s the games event management. Every moment of the game I didn’t spend standing perfectly still outside of the ire of my opponents was filled with the endless, confusing,haphazard, and irritating chatter of the off-screen rangers. More than any soundtrack or looped enemy taunt, it’s the grating chatter of the benched mega-mumblers that will haunts players dreams. “Are you okay?!” will rattle from the Pink Ranger’s helmet gilded lips so incessantly that when it’s not dubbing over the prattle of the other rangers it will over itself.  I spent the better part of an hour trying to leap to a poorly arranged, progression-essential ledge, cursing everything from my eyesight to the button sensitivity of my 3DS in hopeless frustration, and still nothing plagues my memories of this game more than my teammates patronizing “advice”. And that’s before the apparent frustration of your sidelined partners bubbles over and they take matters into their own hands.

You see, one of Megaforces extremely minor but adorable gimmicks is the ability for the player to photograph themselves, and when the game begins, mount your head on the body of the ranger body you choose to inhabit. In effect, making you the ranger of your choice.

The natural result of this is your chosen character becomes your favorite. You become the most  familiar with their particular attacks, powers, speed, and so on. A comfort turned handicap when at certain points of the various battles another one of the rangers will leap into the fray, displacing your chosen character, and forcing you to use their particular style for the length of a fight. While at first merely confusing, this pattern became a major irritation as I got further in the game and found there were certain characters I plainly didn’t like. When force-switched to use these characters I would sometimes find myself getting mercilessly beaten by the peons I was cutting swaths through moments ago, all while being asked if “I was ok?!” by the very pastel-colored sadists who put me in the position. This made gameplay which was already bland, straight up distasteful; like an olive garnished upon a vanilla ice cream cone.

More than most of the games I’ve played this year, Power Rangers Megaforce really seemed like a video game made for people who don’t know anything about them. Even the card collection aspect of the title, where the purchase of scannable, separately sold, playing cards can unlock more of the Power Rangers abilities, is so tacked on only the youngest and the least informed will find any value in it. Sure, all franchises have their fair share of stinkers, but this title is completely dialed in and one of the worst tie-ins I’ve trudged through since the original NES Teenage Mutant Ninja Turtles.

Power Rangers Megaforce, like any lazily created tie-in, is a missed opportunity. Instead of taking the chance to add to the franchise's legacy, this title doesn't even try hard enough to properly fail. There are a few gimmicks which might appeal to fans, but nothing that will make this title memorable. This game needs to go-go back to the drawing board.