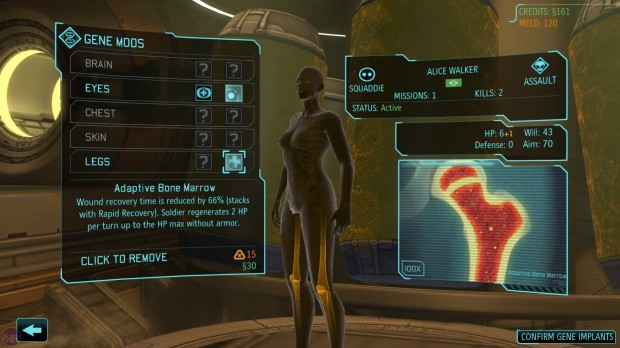 David Roberts did our original review of XCOM: Enemy Unknown on the PC, and I played it on the Xbox 360. I loved it so much that I picked it up on the PC as well, happy to double dip on such a solid product. Unfortunately, as is often the case, I never got around to beating it on the PC. Enemy Within, the expansion to last year’s surprise hit, concerned me – it seemed I’d have to race through the full game to kick off the new expansion, but I was wrong. XCOM: Enemy Within is more like a Game of the Year edition. It tears open the original, fixes minor issues, adds a wealth of new features, and sews it back up to face an all new threat for the XCOM team. Could there be enough to warrant another trip through the war-torn turn-based tactical world? Let’s find out, Commander.

XCOM: Enemy Unknown made me itch. I’m a completionist, and it wasn’t the type of game where you could do everything. There might be enough time to research every piece of technology, but there just isn’t enough money or time to save everyone. You’ll always have soldiers who aren’t up to scratch, and you will find yourself face to face with the enemy mothership before long, ending the game. Rather than tacking onto the end of Enemy Unknown, Enemy Within folds directly into the original product. In fact, when playing it on the PC you’ll select a separate executable to run the game with the enhancements baked in.

One of the issues we had with the previous product was the short list of maps. After a while you had a inchworm strategy, allowing you to set up sight lines for snipers to rip down enemy interlopers with ease. Well, that is gone now as the Enemy Within adds over 40 new maps, giving you a constantly fresh setting throughout the campaign. If that wasn’t enough, Firaxis has also expanded a few of the options given to us by the DLC for the main product, most notably adding timed (and thankfully mostly optional) sub-objectives. It’s the “Meld” that’ll make your day though.

While money and alien technology are the currency in Enemy Unknown, the main resource you’ll want most in Enemy Within is Meld. Found on most of your missions, cannisters of recovered Meld will allow you to unlock a new research project called Meld Recombination. Upon completion you’ll be able to build a Genetics and a Cybernetics Lab. It’s at this point that you have to ask what you would do to win the war. Genetics give your soldiers access to rather innocuous such as retinal upgrades, discovered via alien autopsies. You’ll be able to upgrade your brain, eyes, chest, skin, and legs, with two upgrade slots for each. Cybernetics are an entirely different kettle of fish.

Cybernetics strip not only all of your skills and genetic modifications, but also a bit of their humanity. Their arms and legs are removed, replaced by mechanized robotics, changing them into “MEC Troopers”. These troopers are still human, but have essentially become a walking tank. These Mechanized Exoskeleton Cybersuit Troopers no longer use cover, but they also become immune to poison and fire. They can equip flamethrowers, miniguns, railguns, particle cannons and much more discovered via through research and alien autopsies. The cost of dealing devastating damage on the battlefield is just a bit of that soldier’s humanity. Their voices become monotone and robotic, unable to undergo any level of Psi training. I ask again – what would you give up to win?

Your alien enemies do not have this moral quandary. Unleashing new foes into the field, the MEC Trooper is equally matched by something far more terrifying than Mutons – the Mechtoid. Mechtoids are cybernetically enhanced Sectoid soldiers, capable of attacking twice per round (if it doesn’t move in that round), and sporting an incredible amount of health. In practice they are every bit as dangerous as they sound, easily devastating any meatbags foolish enough to step in front of them.

On the opposite end of the spectrum is the Seeker. They remind me of the “Squiddies” in the movie The Matrix. They are Sectoid creatures with long tentacles that swirl behind them as they move, capable of cloaking themselves, appearing where you least expect them to hit and then zipping off. They can also latch onto your soldiers, strangling them resulting in a severe movement and aim penalty for a round. These guys unfortunately look a little more scary than they sound, putting themselves well within sight range of my snipers and often getting cut to ribbons before they could do any real damage.

Only two new enemies doesn’t sound like a huge threat, but aliens aren’t your only problem. As if fighting an alien incursion wasn’t bad enough, a paramilitary group called EXALT also wants to harness alien technology, but they want to use it to take over the world. Visiting the Situation Room now opens up a Covert Operations option where you can scan for hidden EXALT cells. Discovered cells are unable to act against XCOM, but those that remain hidden can sow further panic, steal cash, and sabotage your active research projects. Since scans start at 50 bucks and go up from there (costs reset every in-game month), this creates another strain on your already-stressed bankroll.

Thankfully, it’s not just scanning and detecting – you can also strike back against EXALT. Every scan gives you clues that can help you narrow down where the EXALT base is located, and once you have enough of them to be sure, you can launch an assault and destroy the group once and for all. Launching attacks against EXALT soldiers gives you a taste of what it’s like to fight against your upgraded troops as EXALT troops embrace genetic modification wholeheartedly. They also have the same class structure as your team, so expect smoke grenades, snipers, and more. Once you have a base location you can send in one of your soldiers for a three day recon mission to recover valuable intel, and a very difficult extraction at the end. The clues you collect from EXALT bases are fairly vague, but if you accuse the wrong country you’ll upset them greatly causing them to withdraw from the Council permanently.

One of the coolest new features is the option to have your soldier speak the language of their home country. Not all of them are represented (No Chinese or Japanese), it is far more immersive to have people speak something beyond five flavors of English. Additionally, there are a series of medals you can award your soldiers. You can pick between two powers and name them anything you’d like, but each soldier can only have two – surprise…more hard choices.

Obviously new gear, maps, resources, and threats change the nature of the game, but Firaxis has worked very hard to balance against all of these elements. Similarly, the timed sub-objectives are impossible to ignore, pushing you out of well-defended foxholes for dangled prizes like additional Meld canisters. It changes the nature of the game, asking you to press forward and assault instead of playing the defensive game. You will absolutely need these Meld containers too – the difficulty has gotten a bit of a tweak. I found myself engaging Mutons and Chrysalids earlier than I had previously, and only through genetic or cybernetic manipulation did I stand a chance. The modifications were an additional strain on my already-tight finances, but having all of the DLC missions mixed in helped to alleviate the constant hits to my pocketbook.

If I have any complaints with Enemy Within, it’s the same problems that I had with Enemy Unknown. First, the pathing AI is absolutely rock stupid. An entire map full of non-poisoned area to choose from, but my soldiers routinely frolic directly through the purple clouds to injure themselves. Perhaps they just wanted some sick leave to relax at the base, but I can’t readily tell you how many times I selected sub-optimal or flat out dangerous routes just to try to guide my soldiers down a safe path. The second issue manifests during interactions in missions. If you have to click on anything (switches, doors, Meld canisters, etc.) it becomes very easy to accidentally waste a precious action accidentally moving your character. Minor nitpicks to be sure, but frustration just the same.

Like the soldiers in the game, XCOM: Enemy Within takes everything introduced in Enemy Unknown, polishes it, enhances it, and redeploys it into the field. It’s stronger, it’s meaner, and it’s awesome. The new additions force your hand to make tactical decisions that can and will lead to the death of soldiers that you’ll become attached to now more than ever.