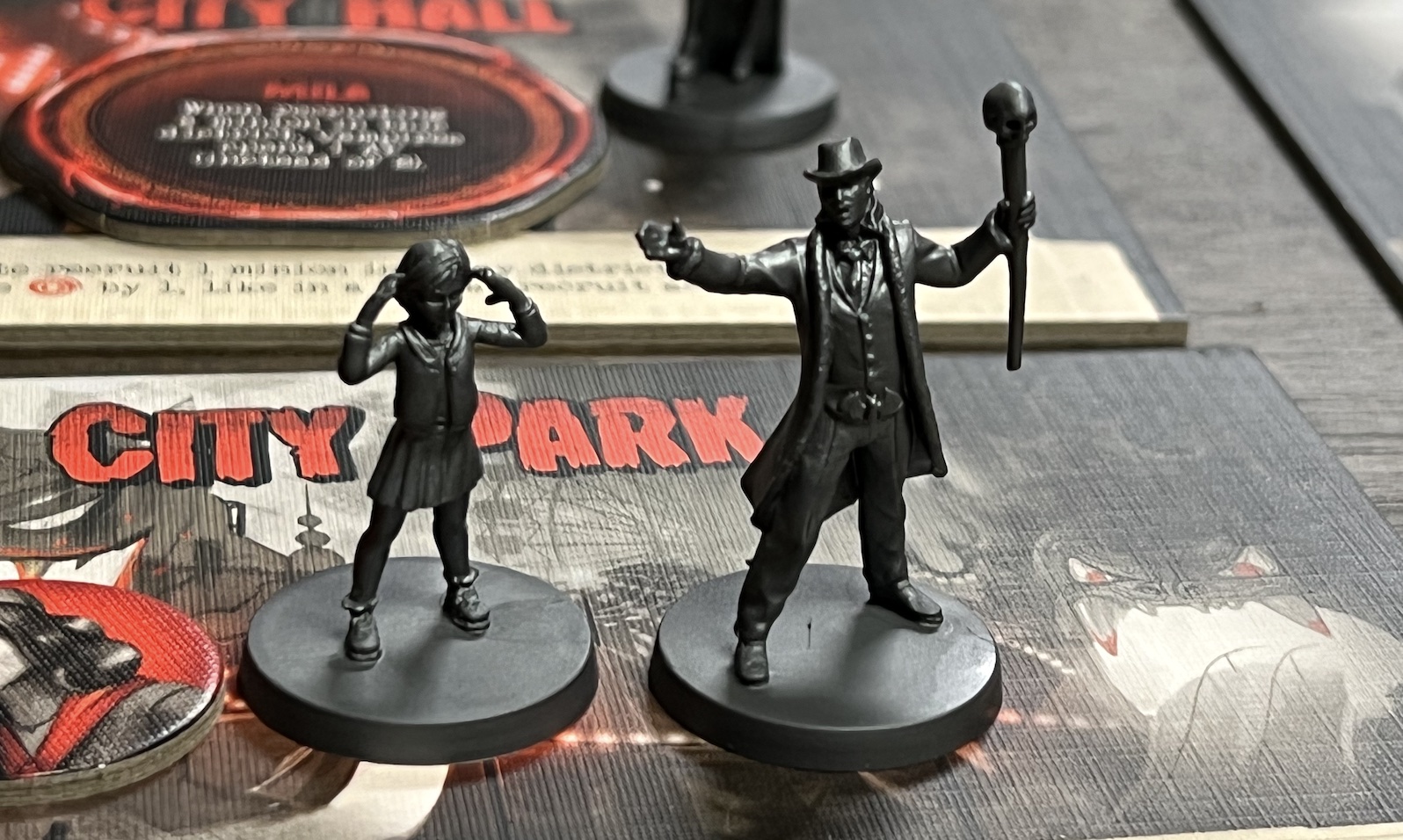 Masters of the Night is a tight, brain-burning puzzle game. You play as 2 – 5 vampires attempting to take over the city with the help of their minions and some magic. These are not your standard modern vampires, though. These are old-timey vampires that have awoken after being asleep for decades. The game is set in the 1950s and the inspiration and art are from a bygone era of vampire lore.

There are six vampires in the game to choose from. They each have two unique abilities that will somewhat change how you play the game. Abilities range from mind control and quick speed to clairvoyance and demon summoning. The weaker ability you start the game with and requires blood to use. Blood is a very limited resource and also serves as your health. You’ll need your abilities to win and managing the blood of your vampires is one of the main aspects of this game. As your vampires get kills they will grow stronger and gain more abilities, eventually unlocking their other unique ability, which costs shroud to use. Shroud is a common resource for all the vampires and is one of the main focuses in the game. You start the game with the maximum of six shroud and if you ever run out then you lose. 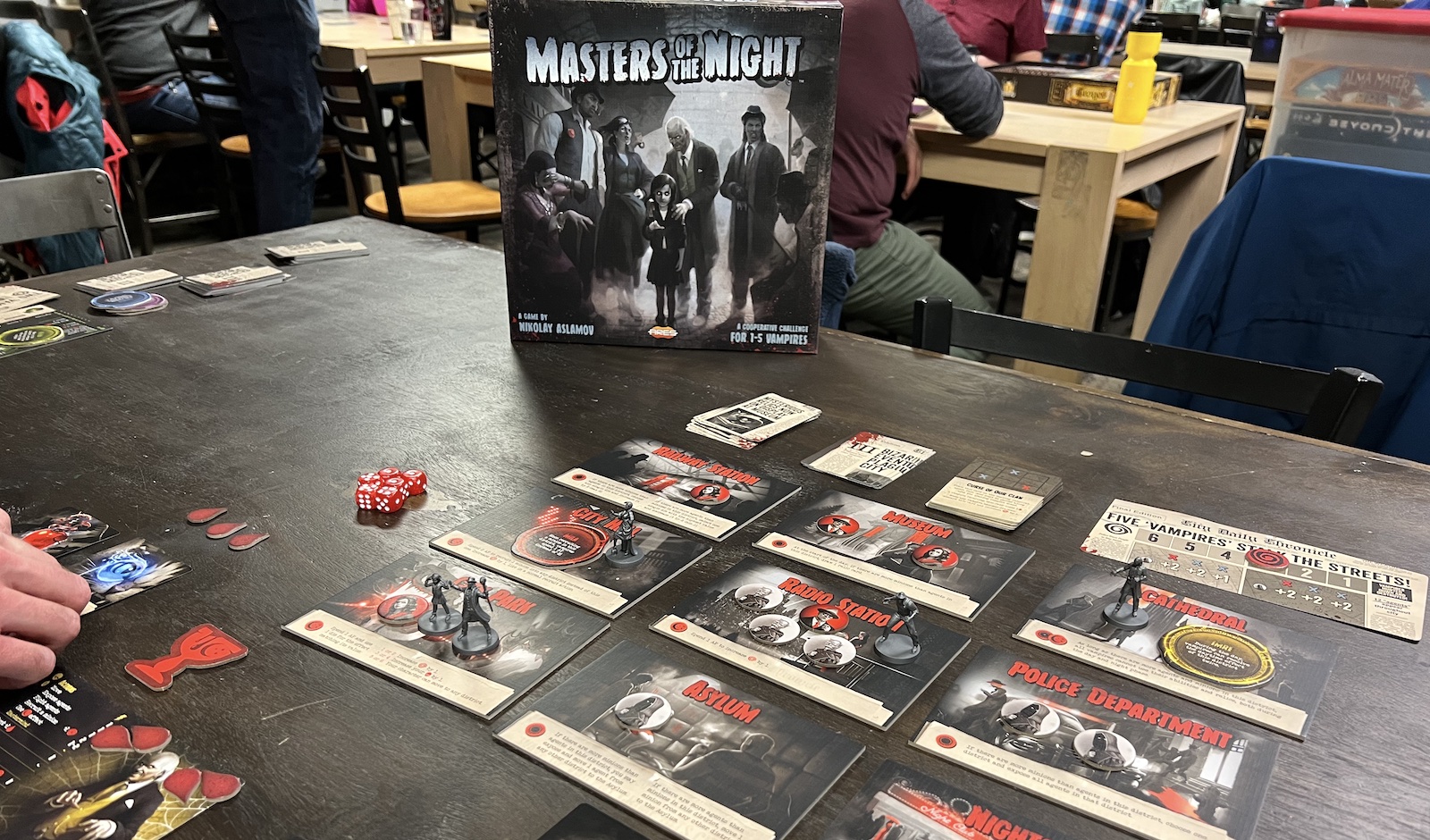 The game board is a three-by-three grid of mostly randomized locations. They’re always the same locations, but other than the one you begin on they are shuffled and placed differently each game. During the game you’ll move between them trying to maintain control with your minions while killing agents that will spawn every round. At the beginning of the game you build a stack of events that get harder as the game progresses. An event is drawn at the beginning of each round and will spawn agents on the board. If your shroud is low then even more agents will spawn. And when agents spawn on your vampires or your minions, then your shroud drops another level. You will need to use the actions on your turn to raise your shroud back up in order to prevent yourself from losing the game when agents spawn. This tug-of-war is a big focus in the game and is very tight as you only have 6 shroud and you can lose shroud multiple times during an event. You also gain a shroud whenever you cannot spawn an agent because you ran out of tokens. 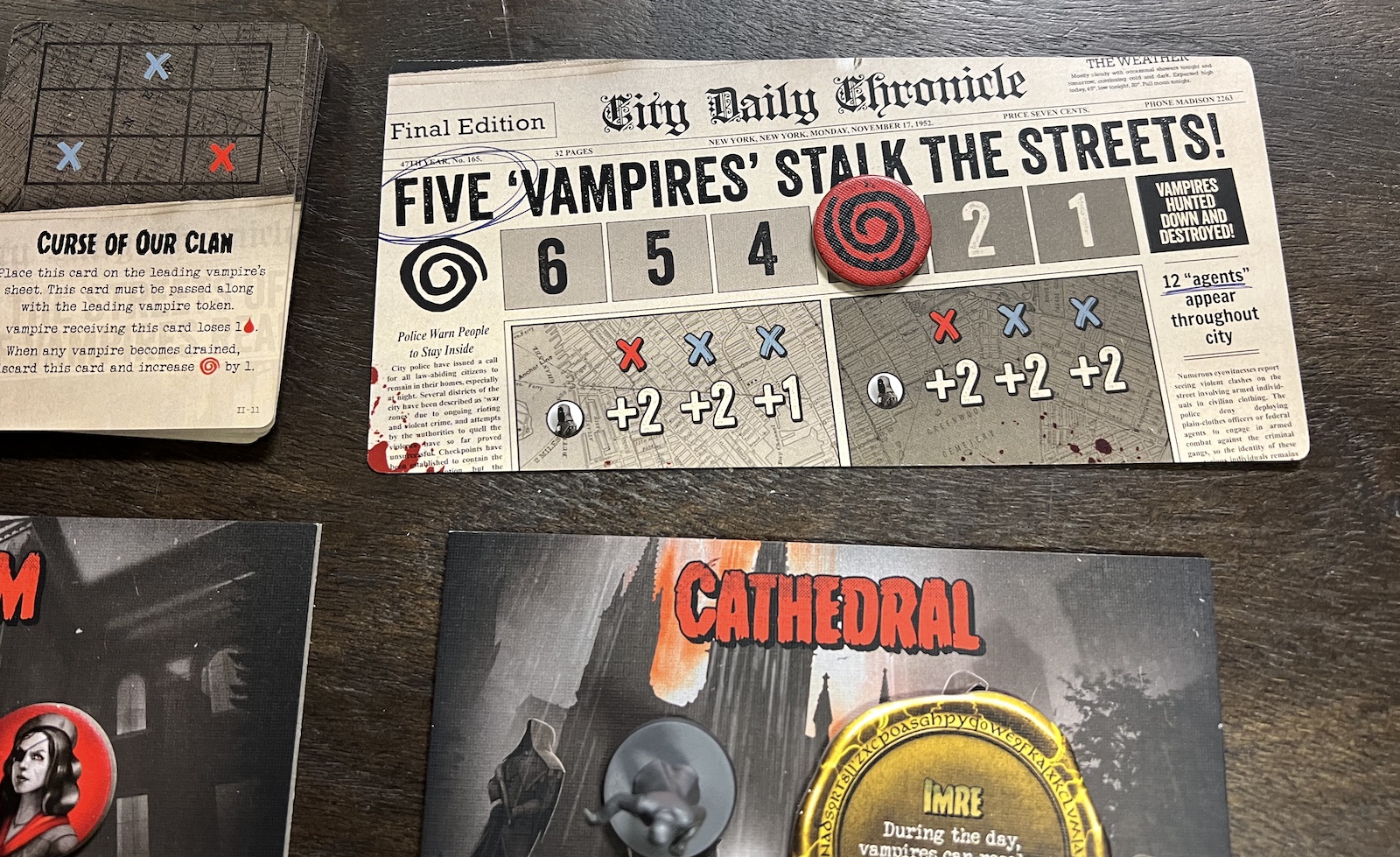 During a round, each vampire will act in order and the starting vampire moves to the next vampire each round. This turn order, like everything else in the game, is another aspect of the puzzle that you need to manage. Each vampire gets two actions on their turn – that’s not many. Attacking agents takes an action, but they all start concealed, so you first need to take an action to reveal them. you also need to be in their location, so you have to take some move actions first to get there. Have you been using your blood abilities or taken any damage? Well, you better feed to heal and that takes one action per blood you restore. Want to recruit a minion, which also has the advantage of increasing shroud by one? That’s going to take both of your actions. Different locations also have actions available that can help you out, but you still only get those two actions every turn. Once a vampire reaches the maximum number of kills they have the ability to place a sigil on their location for the cost of one action and one minion. It has a special ability, but in general I found that these are placed right before the end of the game and don’t have much of an impact on your strategy. In order to win the game, every vampire must reach maximum kills, place their sigil, group up with all the other vampires and an equal number of minions, and then spend one more action to cast the blood ritual and win the game.

To add to the difficulty of your decisions along with some randomness, you have a pool of d-6 dice that you roll at the beginning of the game. The pool is two dice per vampire in the game. Unlike some games where low values and high values have different but equally useful uses, in Masters of the Night high is good and low is bad almost universally. And you must use all of the dice in the pool before you get to reroll. There is one location that you can spend actions to use your low dice for good, but that is it. 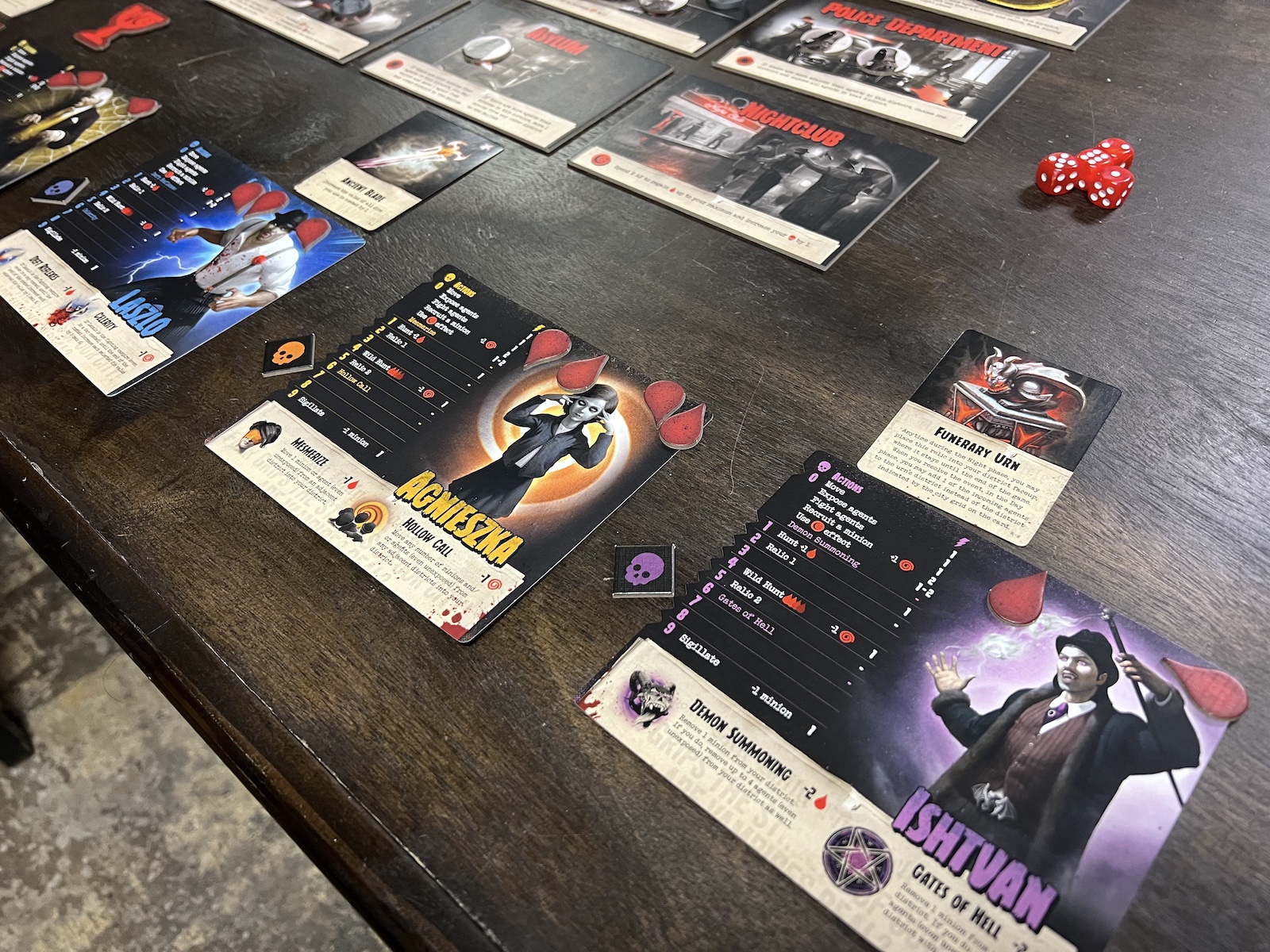 The primary use of dice is combat. When you attack an agent or group of agents, for each one you have to select a die in your pool. If it is a five or six then you defeat the agent. If it is a three or four then you defeat them, but also lose a blood. And if it is a one or a two then you just lose a blood and they remain. If your vampire is ever completely out of blood they become drained. This on its own isn’t too bad as you will resurrect on that vampire’s turn with one blood. However, the resurrection comes with the loss of a shroud which you are already desperately fighting to keep high. What makes combat even more difficult is daylight. If after resolving an event there are any vampires in a space with three or more agents, then those agents become exposed (good) and then attack the vampire during the day (bad). Combat during the day is the same as at night except that you must use the lowest valued die for each agent that is attacking. So if your pool is a bunch of 1s and 2s, you’re likely to have a drained vampire very soon.

One last bit of gameplay thrown into the mix are relics. One location in the game allows you to draw a relic each turn. Vampires that have enough kills can equip one or two of them. These have many varied effects that can change your game. In order to get these relics you have to have more minions on that space than agents. This is a common theme of many spaces, but you need to choose carefully which spaces you want to try and control as resources are tight and the more spread out you are the more likely that you will lose shroud on agent spawns. 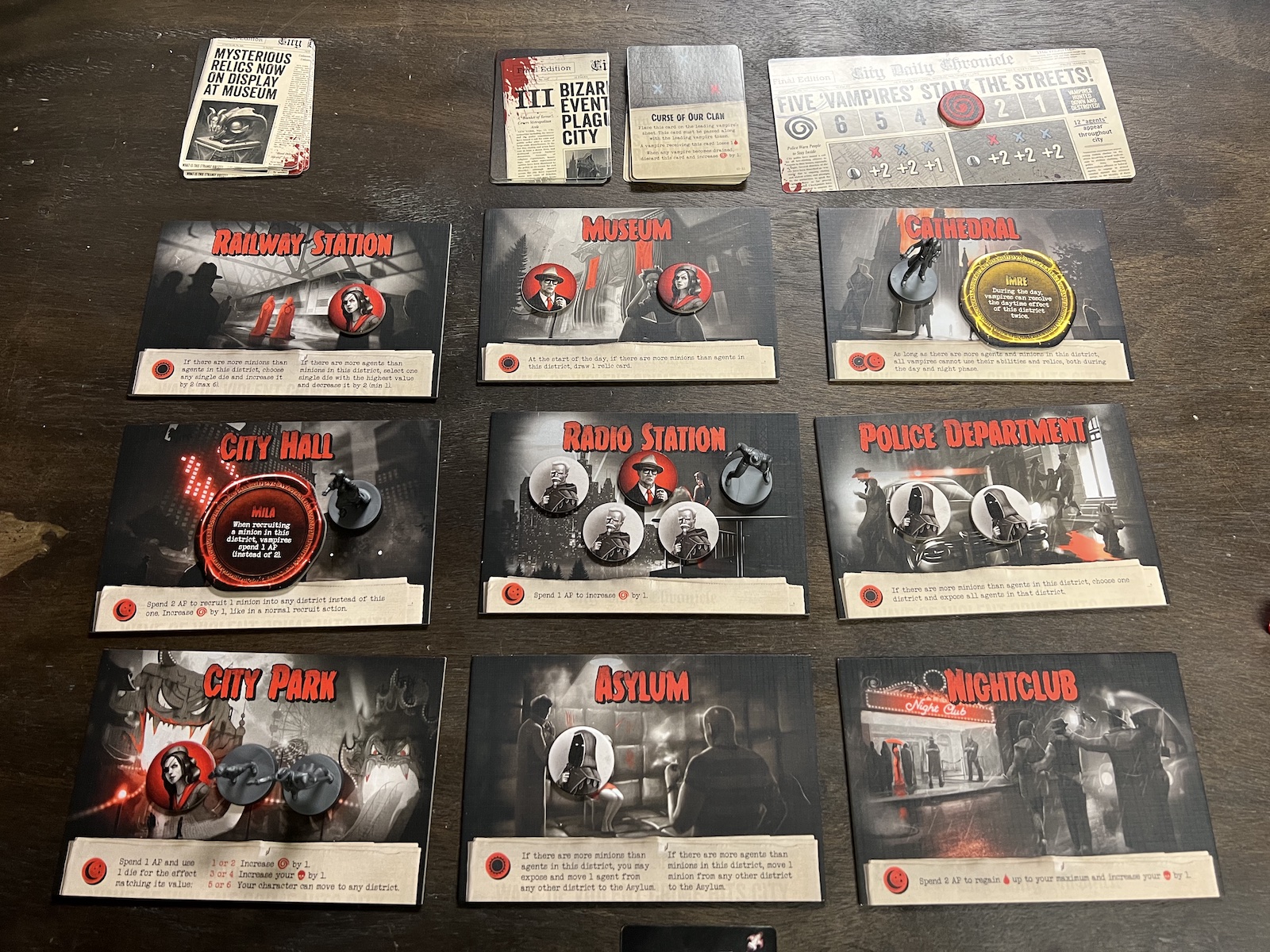 The components for Masters of the Night are very high quality. Good dice, thick tokens and board tiles, good quality cards, etc.. The character cards are a little thinner than I’d like, however. You keep track of your kills with tokens along the edge of the character card. Since the character cards are thin and light they can slide around a bit, so you need to be careful not to lose track of your kills. A minor complaint, but something like a clip on the side I think would have been a better way to track the kills. The box is a little bigger than necessary in order to fit a custom insert with slots for all the components. It mostly works well with the exception of some tokens easily sliding out of their slots. The art in this game is really great. The events and shroud tracker are designed as newspaper headlines and are really well done. Other than those though, there is no flavor text on any of the components. All of the mood setting and story is either through card titles on relics and events or all of the art in the game. The rulebook for Masters of the Night is satisfactory. I didn’t have any trouble learning the rules and referencing parts that I had forgotten was fairly easy. I wish they had a round overview on the back of the book though as I had to consistently keep it open to the middle to remember the step order at the beginning of each day.

Masters of the Night is a completely open information game, meaning that it is basically a solo game that you can play with other players. You can either play with some friends in order to have more brains, each of you controlling separate characters, or you can play all the characters on your own to have better coordination among them. Which way you prefer is completely up to you, but you will definitely need coordination in order to win. This game is difficult. It isn’t a sandbox story game where random events happen to make an interesting series of events that ultimately end in your victory. It is a hard puzzle game that continuously throws wrenches in your plans and requires you to respond carefully and perfectly in order to not lose. 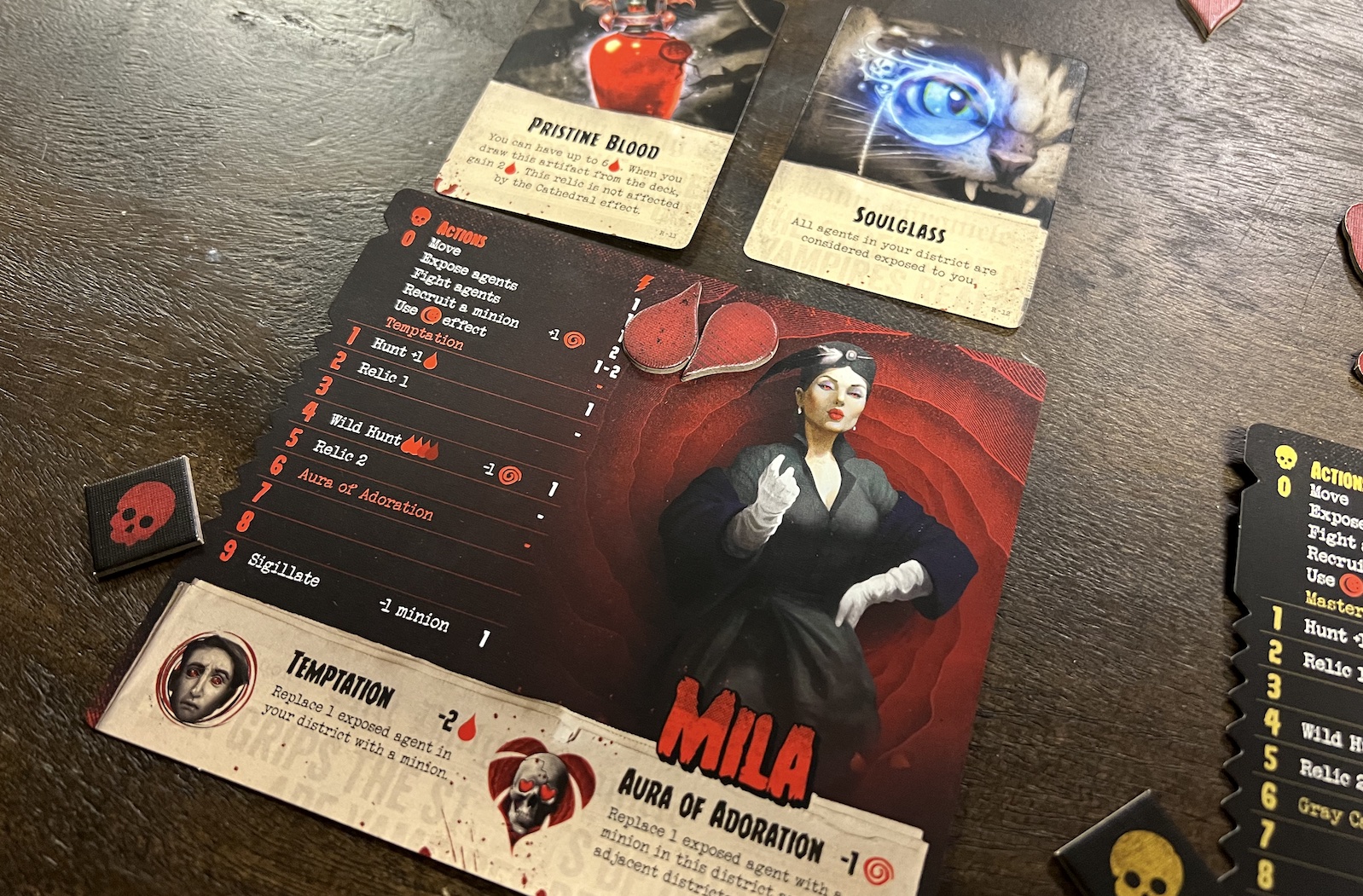 Regarding replayability, there is some variety with each playthrough. The event deck is built from over 50 different cards. However, most of the level one cards just spawn an additional agent. Most of the level two cards end up going on the board, causing a location to hurt you until you take it over with your minions. The third and final level has some interesting and brutal cards, but those come in right towards the end of the game. There are 13 different relics that you may or may not see in your games. They have varied and interesting effects, but nothing completely game changing. And of course you have the different vampires with their unique abilities. They definitely have an effect on how you need to approach the game. However, in general, each game is going to be the same puzzle. You spawn agents on the same nine board spaces which you need to deal with. You have a pool of dice that you need to use during combat to the best of your ability despite your terrible rolling. You need to spawn minions and control the board while keeping your shroud high enough not to lose. You need to get all your vampires to maximum kills and complete the final ritual before running out of time. It is not an easy puzzle and has enough randomness to prevent you from being able to solve the game completely.

In summary, Masters of the Night is a challenging, themey solo / cooperative puzzle game with good quality art and components. If you enjoy the puzzle that it provides and like a good brain-burning experience either alone or with some friends, then I would recommend this game. If you enjoy a lot of varied replayability and story-driven gameplay, then this might not be the game you are looking for. 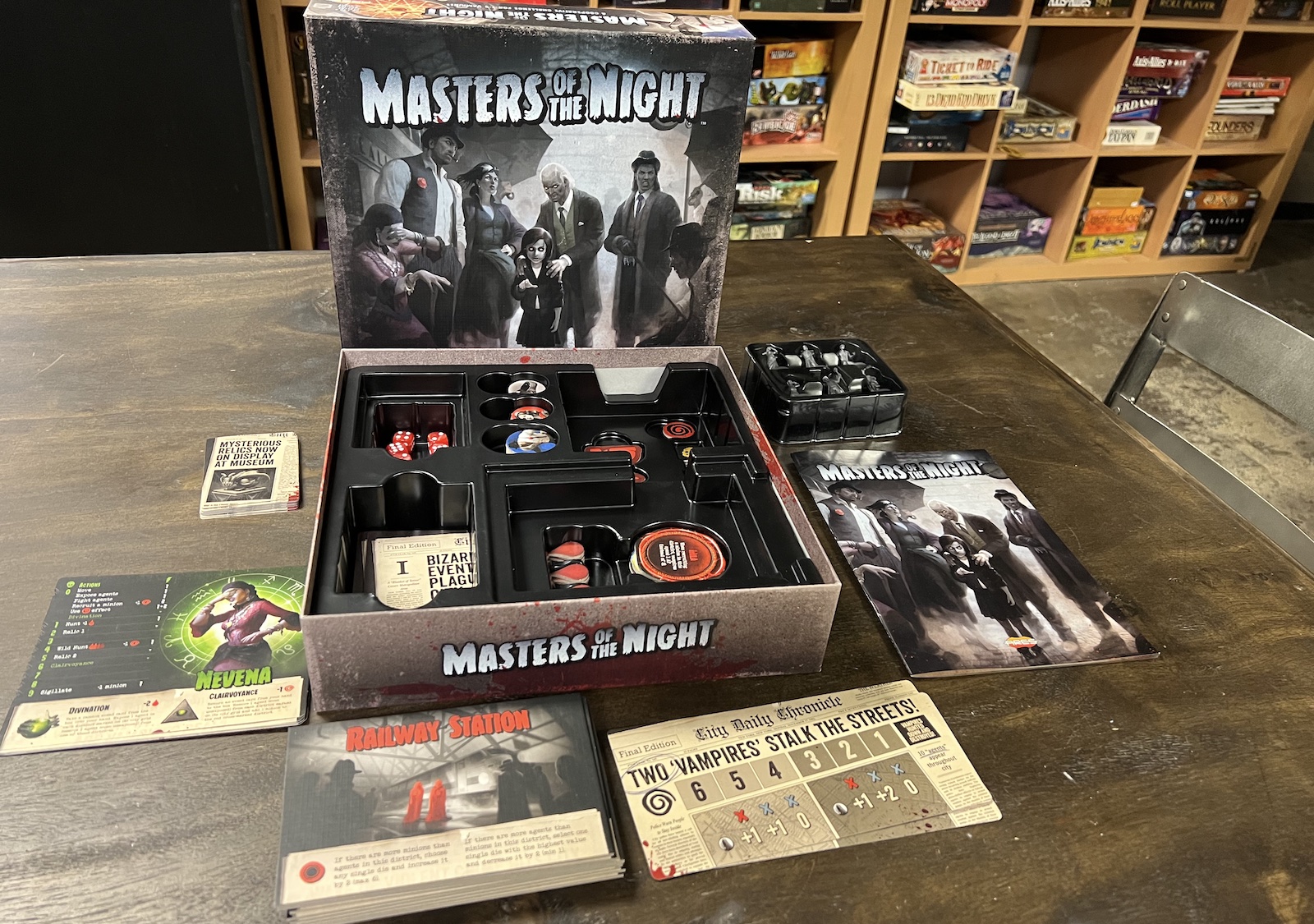 Masters of the Night

Masters of the Night is a challenging, themey solo / cooperative puzzle game with good quality art and components. If you enjoy the puzzle that it provides and like a good brain-burning experience either alone or with some friends, then I would recommend this game. If you enjoy a lot of varied replayability and story-driven gameplay, then this might not be the game you are looking for.