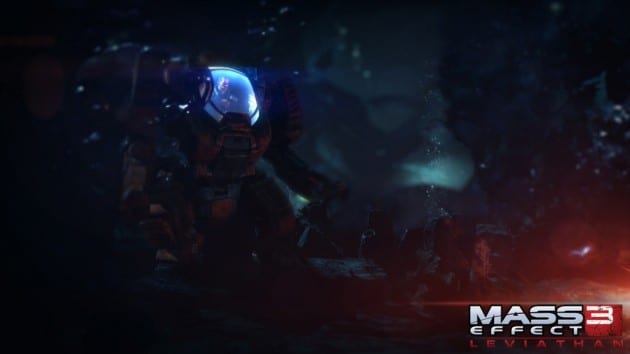 Commander Shepard returns with Mass Effect 3’s first paid single-player expansion: Leviathan. Shepard is tasked with tracking down a mysterious presence with enough power to destroy a reaper. Without spoiling anything, Shepard makes a discovery that fundamentally changes the Mass Effect universe as we know it in this action-packed addition to Mass Effect 3.

The expansion lasts no more than three hours, even at a leisurely pace, and includes several combat missions in between a few wonderful investigative segments that take place in a Citadel laboratory. The combat, while containing the same enemy types that we’ve become familiar with by now, does its best to keep things fresh with escort elements and a few other surprises, while the investigation portions present a new type of Mass Effect gameplay that expands upon the ME lore.

The investigative portions of Leviathan are the most unique parts of the DLC , which have Shepard collecting clues in order to track down the mysterious presence responsible for a reaper’s death, with the reapers hot on your trail every step of the way. This is a refreshing change of pace from most of the other missions we’re used to in ME3, which almost always require nothing more than a steady trigger finger. Other new content includes a game-changing new power for Shepard (that I won’t detail here to avoid potential spoilers) and a few new weapon mods that weren’t very noteworthy in a game that already has so many.

The soundtrack is more of the same from ME3, but every bit as good, and the visual presentation is exceptional, with only a few minor graphical glitches from time-to-time. The gameplay is on par with the rest of ME3, but the DLC lends itself to very little choice, and therefore, very little replayability.

While the story of Leviathan is intriguing, it may lose its relevance to people who have already completed the game. The story involves finding Leviathan to get help destroying the reapers, but for those who have done this already without Leviathan’s help, the importance could be lost. Also, the DLC tweaks the ending of ME3 very slightly, but likely not enough to incentivize someone who has already replayed the ending recently for the Extended Cut DLC.

For those who still haven’t had a chance to enjoy the amazing experience of Mass Effect 3, the DLC will integrate well with your experience and enhance an already enjoyable game, but for anyone looking for a reason to dust off their copy of ME3 for Leviathan, the DLC may prove too much trouble for such a brief expansion and not worth the $10 price tag. If you’re a hardcore ME fan however, you won’t want to miss out on the exciting content revealed about the Mass Effect universe.