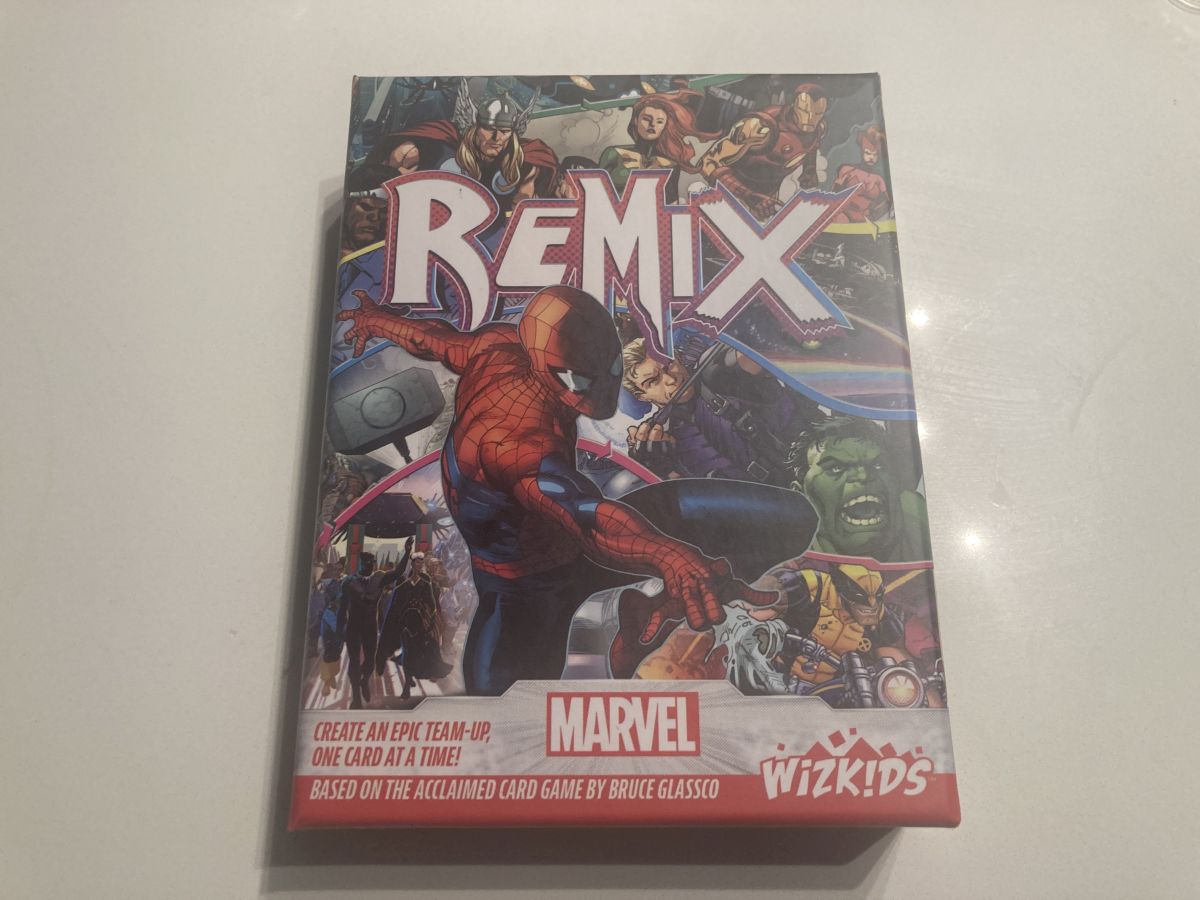 Everyone has that group of friends where, no matter what, nobody can agree on a game to play. This game is too long, this game is too complicated, we have movie tickets for 7:00 and don’t want to be late. Well, Marvel Remix is here for those exact times. With a straightforward set of rules, the ability for 2-6 people to play, and games that take less than 20 minutes, you can pull this game out whenever you need something quick and a lot of fun.

Marvel Remix has everything you need in a small, room-saving box, with the box being a work of art itself. You open the box to find the rule book on top, your score cards, and then the two decks you need in order to play the game: the Remix deck and the Villain deck. Your goal: finish the game with the most points while holding at least one Hero card and at least one Villain card. The game ends when 10 cards are in the discard area. 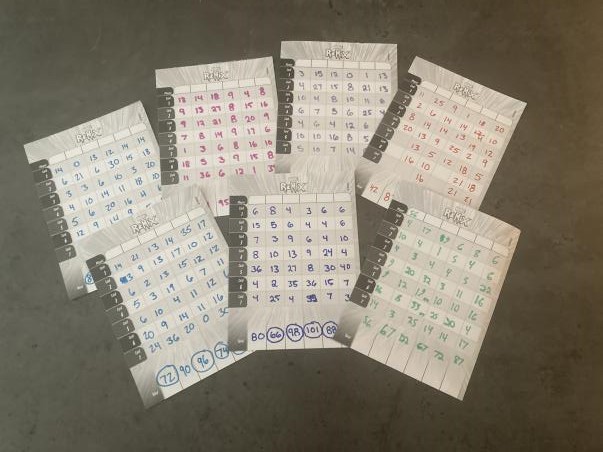 At the start of the game you are dealt 6 Remix cards and 1 Villain card. The Remix deck includes Hero, Ally, Condition, Equipment, Location, and Maneuver cards while the Villain deck includes only Villain cards. Each card has a tag (ex. Tech, Boss, Range, etc) that will be used to trigger your cards such as Conditions, Equipment, etc. Some cards will even have the condition “Blanked unless ____” related to these tags. For example, the card Secret ID gives you 8 points, but has the condition “Blanked unless with a Hero AND a Location with an Urban tag.” What these conditions do is add another level of strategy for building your hand. 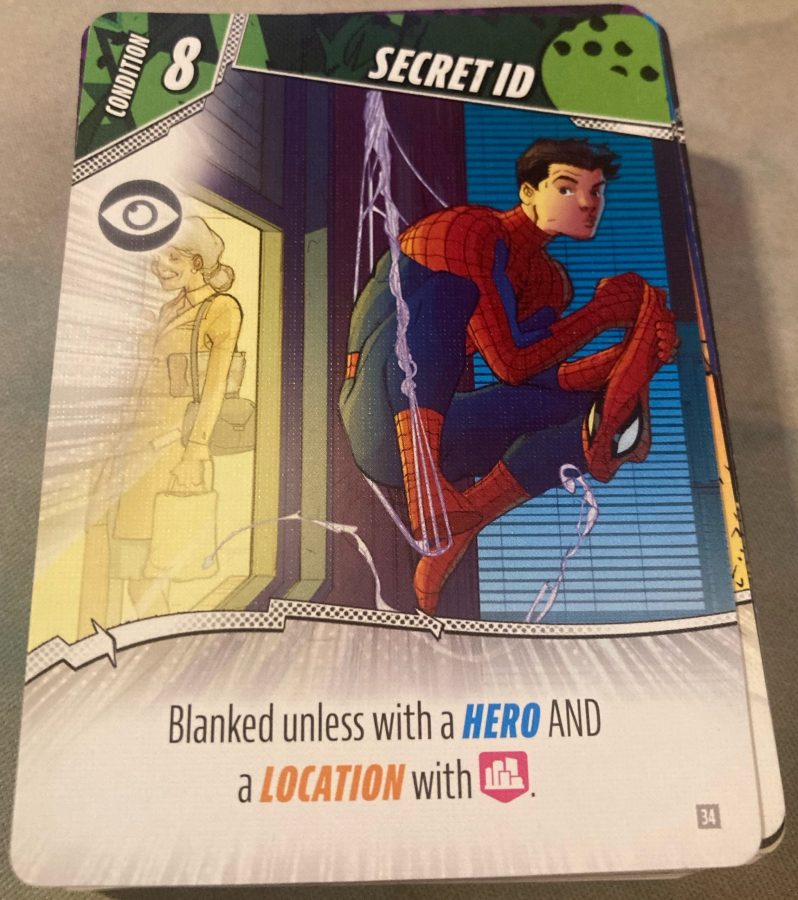 As we’ve discussed, ending the game takes 10 cards in the discard pile. However, for a player to be able to count their points you need at least one Hero card and one Villain card. Hero cards are generally straightforward and are positive points. Some characters start with lower amounts and then gain power depending on if their conditions are met. Example, Thor goes from Thor Odinson (4 points) to God of Thunder (12 points) with Mjolnir or two or more allies. Meanwhile, Villains generally give you a lot of points, but the conditions are much harsher. So finding a villain who can work with the rest of your hand is important. Generally, I had to pull from the Villain deck one to two turns in order to find one that worked with the hand I was going for during the round. These create so many scenarios to look out for, and considering you can’t count any points without a Hero and Villain card it’s smart to look for those early in the game.

A person’s turn consists of one of three choices. You can;

With these being the only choices, it makes for quick rounds and shorter games. With that being said, we played six games as a group (not counting the warmup rounds) and each one felt brand new with us having to make decisions on what type of deck we wanted to build quickly each time. We even decided one round to do a “speed run” to see how quickly we could finish the game. These six games took us a total of about an hour and a half. So 20 minutes, in my opinion, is the max a game should be for Marvel Remix.

Now, the part you’re all here for: will this game end friendships? Quite possibly. We only had one moment that got heated and it was based on two cards being similar, but different, so reading the details of each card’s text is very important for the hand building. So make sure if you’re dropping something, you don’t need it.

Another fun element of Marvel Remix is the discard pile itself. When a player discards a card it is meant to be face up. That way, if someone drops something and you need it, you can get that card and it doesn’t add to the discard total pushing the game to end. However, there was a round that I ended up with a lot of Hulk/Gamma cards and I wanted to end the game quickly so my friends couldn’t get more points. So I started drawing Remix cards quickly trying to get us to 10 as soon as possible.

The Marvel Remix box comes with 61 Remix cards and 18 Villain cards. For this review, we were given the promo card for Squirrel Girl. The deck seemed very well balanced with the most powerful card in my groups’ opinion being Kang who starts at -10 points but gives you +5 for every tag in your hand. As you can tell by our scorecards (featured below) we got better the more we played and we felt it. It was also a game where if someone ended up with over 100 points, we generally congratulated them for getting such a great combination. So it’s competitive, but also, some hands are just impressive on their own. 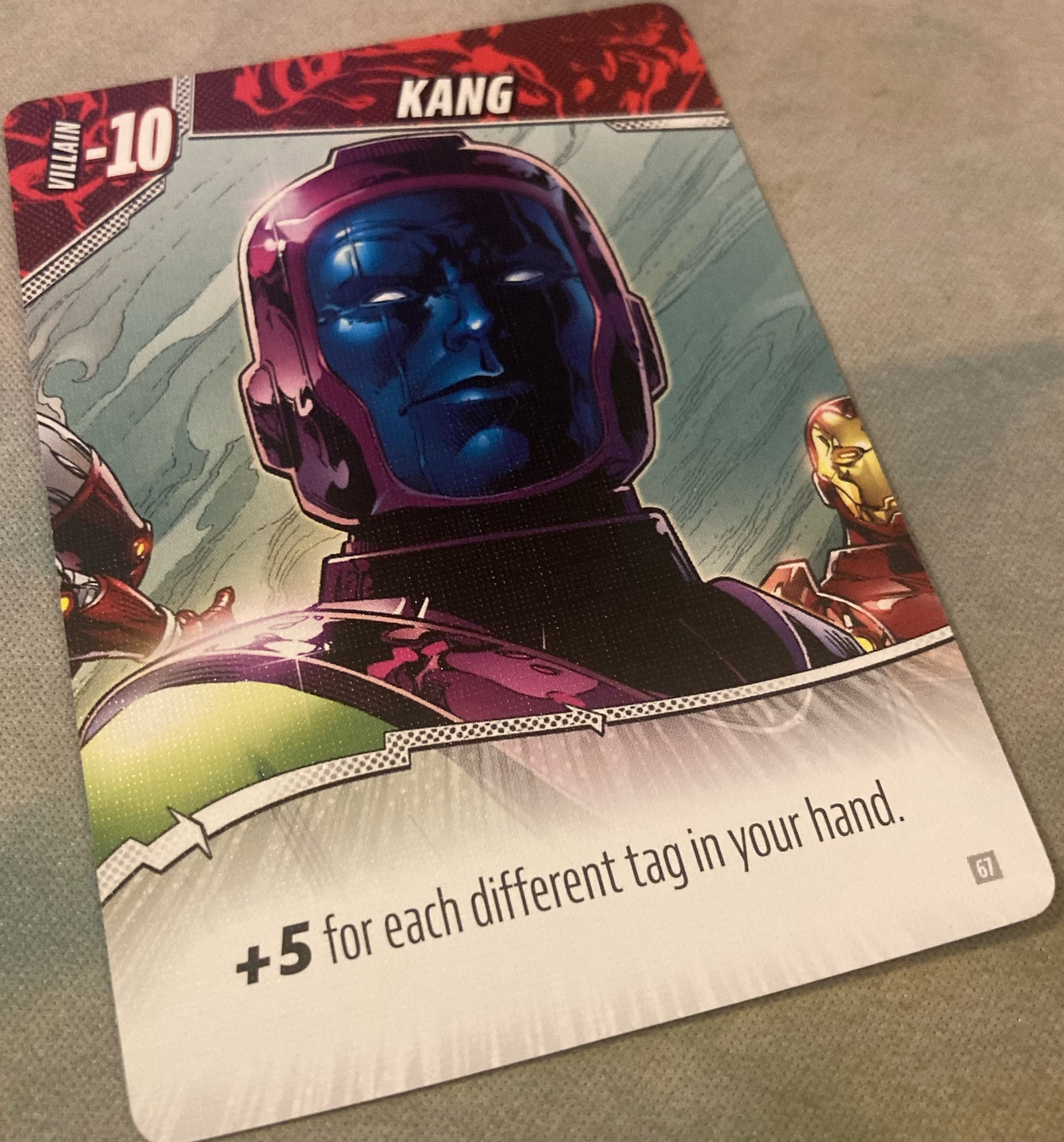 Tabletop games come in all shapes and sizes, but Marvel Remix is one of those games that showcases that sometimes the smaller the box doesn’t mean it can’t be a large amount of fun. With each game averaging 13 minutes for my group, we had a lot of fun trying to create the best hand possible. For us as well, we loved having the winner explain what the story is behind their hand. The game is quick to learn and easy to teach to others. I would highly recommend this game for any Marvel fan who wants a fun game to play with friends.

Marvel Remix is a fun and quick game that can be pulled out and played with friends. Creating the best hand may not always look flashy, but with the Marvel Universe, anything is possible. A must have for any Marvel super-fan’s gaming shelf.

Adam is a musician and gamer who loves his partner in crime, Regan, and their two pets Rey and Finn. Adam is a fan of Star Wars, NFL Football, and gaming in general. Follow Adam on Twitter @TheRexTano.
Related Articles: Marvel: Remix
Share
Tweet
Share
Submit