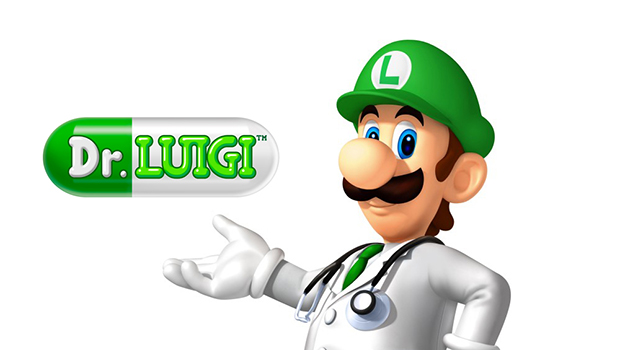 As a final sendoff to the Year of Luigi, Nintendo presents a new version of the beloved classic puzzle game, Dr. Mario, only this time it’s Luigi who’s administering prognosis. Dr. Luigi provides fans with the same addictive gameplay found in previous installments of the pill-popping series, while also introducing new game modes that help distinguish this doctor’s practice from that of his famous older brother.

First introduced in 1990, Dr Mario has since become a staple of Nintendo’s repertoire, inspiring multiple remakes and variations. In all versions, players control a quick to prescribe doctor, tossing pills at germs in hopes of matching four of the same colors in order to eliminate them. As the levels progress more germs are added to the board and the drop speed of the pills increases.

Dr. Luigi features four unique modes of play. The largest difference in this latest incarnation comes in the form of a new game mode titled “Operation L” that introduces an L-shaped pill (in honor of Luigi) that looks like two pills stuck together. Getting these pills to match up with each other becomes a major challenge that greatly alters the strategy of play.

Newcomers to the series may feel most comfortable battling the germs in the “Virus Buster” mode. This mode takes advantage of the Wii U’s touchscreen controls and allows the player to turn the gamepad vertical and navigate the pill placement using a stylus or finger. This was my personal favorite mode and the one I find myself most drawn to for casual pick up and play. The ease of the touch controls creates a unique gaming experience that makes this the real winner of all the featured game modes.

Gamers can also revisit the original classic that started it all by playing “Retro Remedy”. It’s just as addictive as it ever was and fans will be happy to find that it is most faithful to its roots.

In the online battle mode, players are challenged to put their doctorate to the test as they go head to head with friends or random gamers from around the world. It’s quick and easy to use. Within minutes of opening the online battle mode a game match is made that will keep track of the player’s worldwide ranking.  Online matches can only be played using the “Operation L” or “Retro Remedy” modes, which is disappointing considering the appeal of the touch screen controls in the “Virus Buster” mode, but it’s still a fun and simple way to scope out the competition.

After gaining solid ground in single player I thought myself well equipped to take on the gamers of the world, but it seems Dr. Luigi is some kind of hotspot for the geniuses of the world to gather as I was completely decimated by the competition. Part of me wants to chalk this up to a faulty skill matching system, but I’m pretty sure I just need to keep practicing.

Fortunately Dr. Luigi makes practice come easy, so much so that this should probably come packaged with a printed warning label identifying the game as habit forming. The fast paced gameplay and lack of load screens makes it more than possible to lose hours without even noticing.

The game looks good in HD and it’s nice being able to play using the GamePad even if the TV’s off, but I wish they spent more time on the presentation. All things considered this is basically just a green coat of paint on an old game. The graphics hardly boast the next gen graphics that the Wii U is capable of and it feels like a missed opportunity to see the same basic layout as previous titles.

There’s a great deal of attention given to the music, making the soundtrack one of Dr. Luigi’s largest selling points. Each of the gameplay modes features different versions of the original songs that made the 1990 release such a memorable classic. Whether you’re playing the fast paced electronic beats found in the “Operation L” mode or the soft lulling renditions in the “Virus Buster” mode, listening to this excellent score is an incentive to keep playing.

Offering new modes and styles of play, with an ease of access to online matches, this latest addition to Nintendo’s medical practice takes a tried and true formula and resuscitates it with new life. It would have been nice to see more thought put into the presentation, but fans of the series will feel right at home with this familiar layout. The excellent touch controls in the “Virus Buster” mode along with the new challenges posed in “Operation L,” make this a worthy successor and a nice cap off to the 2013 Year of Luigi.

It would have been nice to see more thought put into the presentation, but fans of the series will feel right at home with this familiar layout. The excellent touch controls in the “Virus Buster” mode along with the new challenges posed in “Operation L,” make "Dr. Luigi" a worthy successor and a nice cap off to the 2013 Year of Luigi.