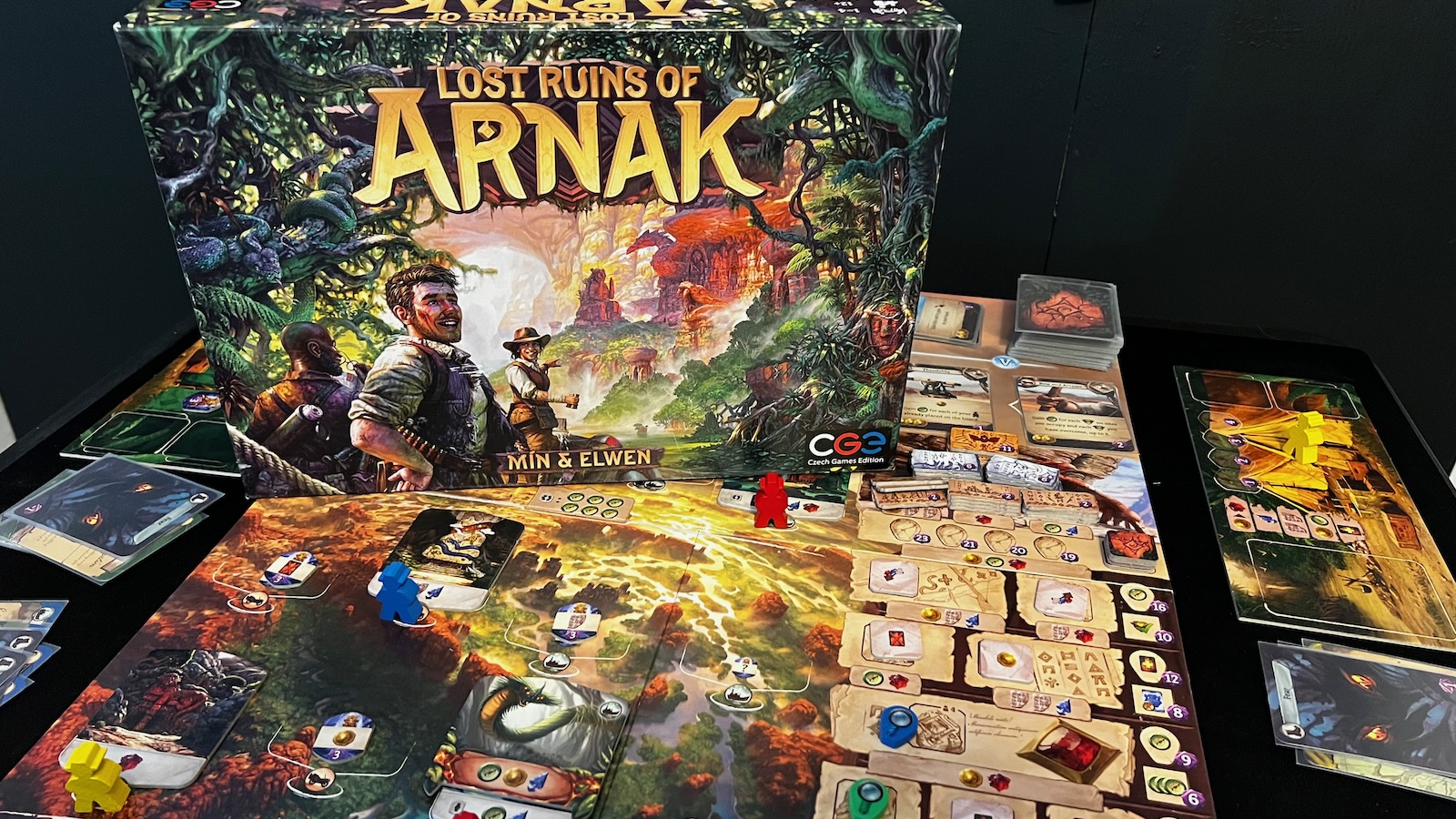 Ever since I was a kid, I’ve wanted to strap a whip to my hip, don a khaki shirt, put on a fedora, and traipse through the jungle in search of lost treasure! In Lost Ruins of Arnak, I got to live out my dream at the dinner table!

Created by Min and Elwyn and distributed by Czech Games Edition, Lost Ruins of Arnak blends the classic worker placement style of play with deck building and resource management. You are an explorer sent on an expedition to a newly discovered island. Over the course of 5 rounds, players take turns to explore new dig sites, overcome island guardians, and research the mysteries of the temple to score endgame points and rise above their rivals. 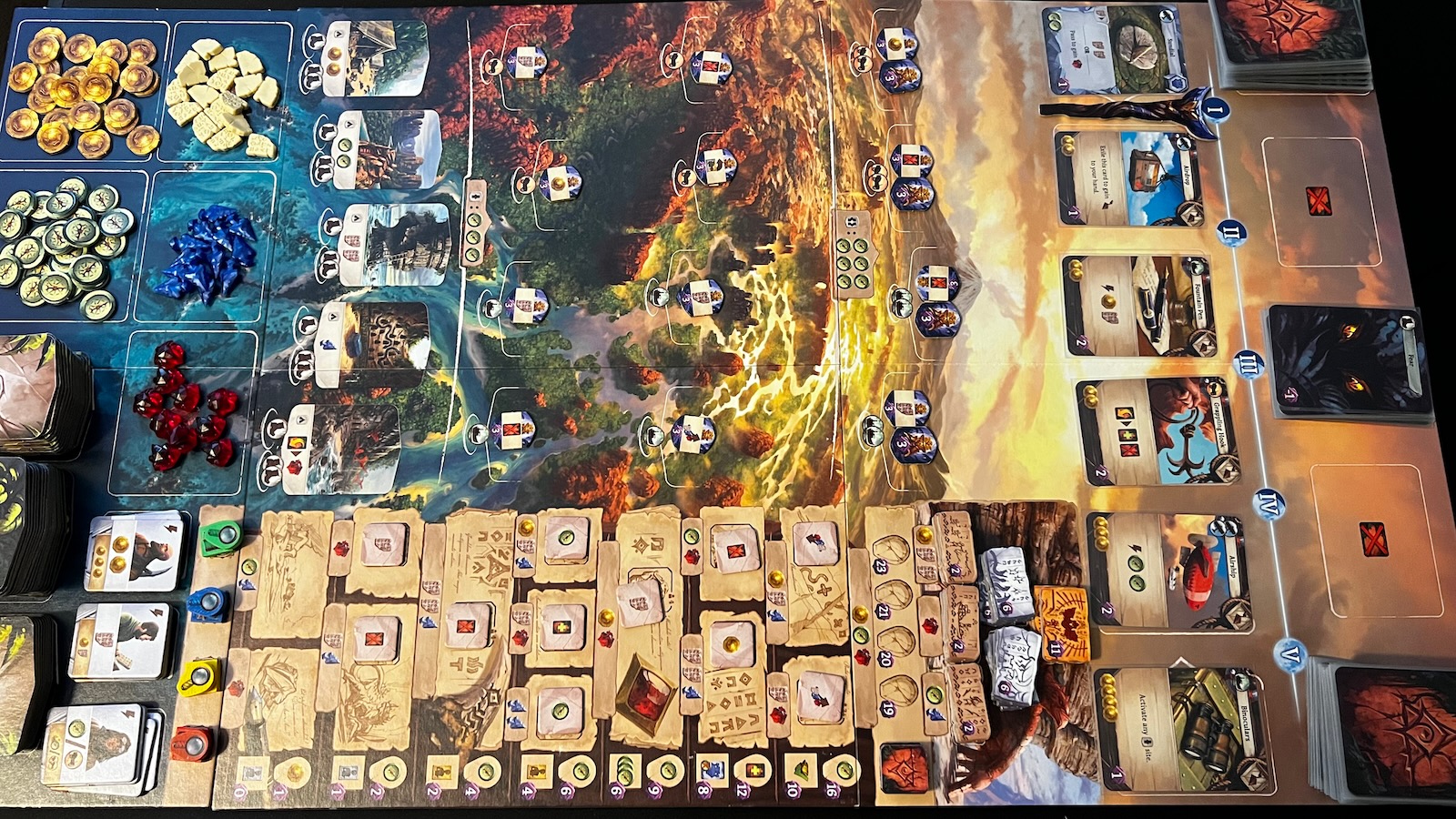 Each player starts with the same starter deck of cards that they can bolster through the purchase of items and relics. Every one of the cards in the market is unique in name, artwork, and ability. Cards are used to pay travel costs with the symbols in the corner or for the abilities listed on the bottom of the cards. Purchased with gold coins, item cards go to the bottom of your draw deck for use later in the game. Purchased with compasses, the relic cards immediately go into effect as you buy them and cost an additional tablet when they are used later in the game. Each card purchased from the market also adds between one and three victory points for the end of the game. Players must also deal with the overwhelming sense of fear their explorers are facing. Players start the game with two fear cards, but can gain more from various conditions on the board. Players are encouraged to get rid of fear throughout the game as each one takes away a point from a player’s final victory total. 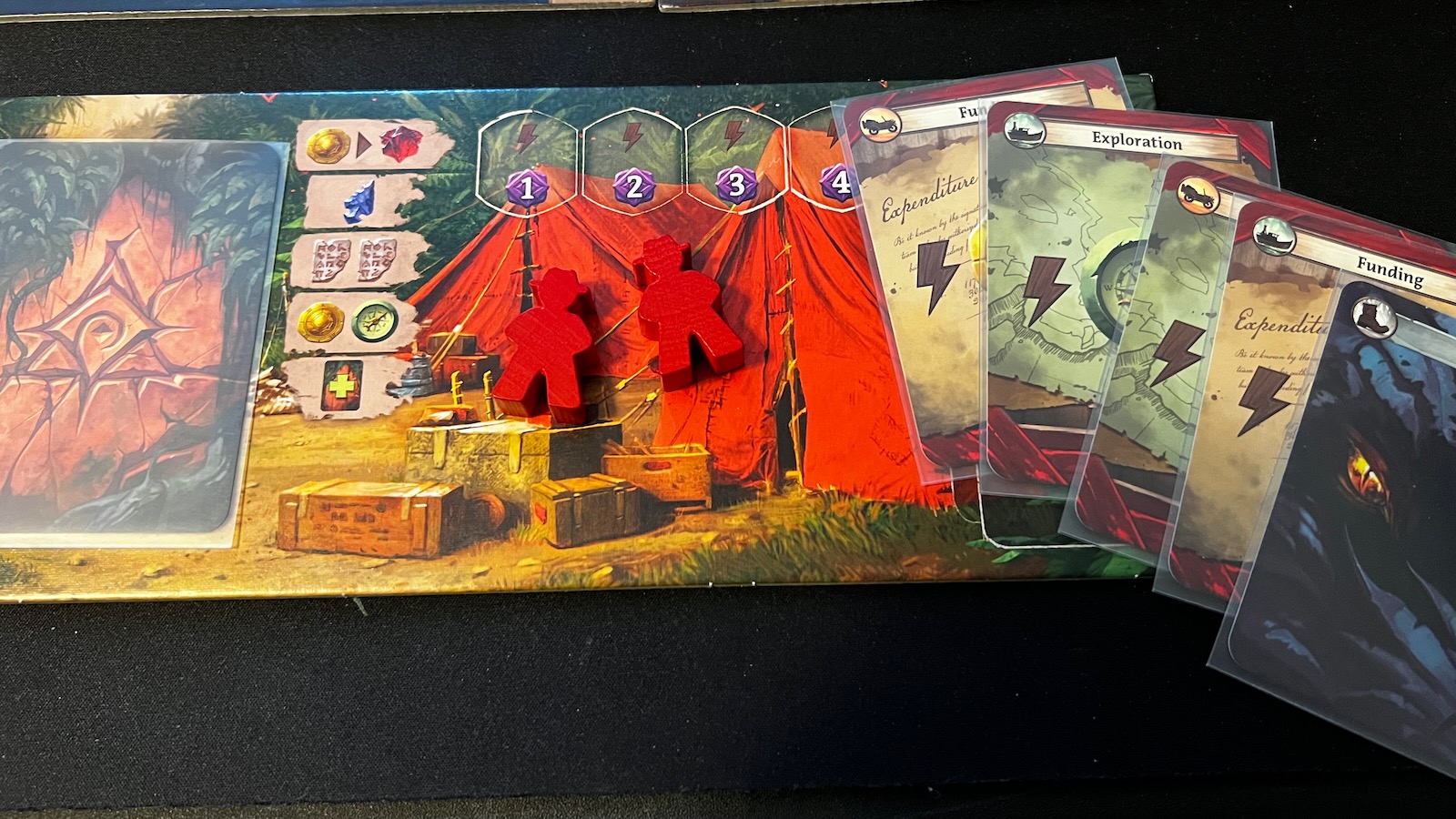 On a player’s turn, there are numerous actions that a player can choose from. By paying a cost, players can move up the research track with their magnifying glass or their journal. Each level of the track leads the players closer to the temple and gains the players different bonuses depending on what level and what tool they are using. One of the best bonuses are the assistants you can hire that give you one time bonuses each round. Another fun part of the research track is the fact that your journal cannot outpace your magnifying glass. You have to find it before you can write it down! 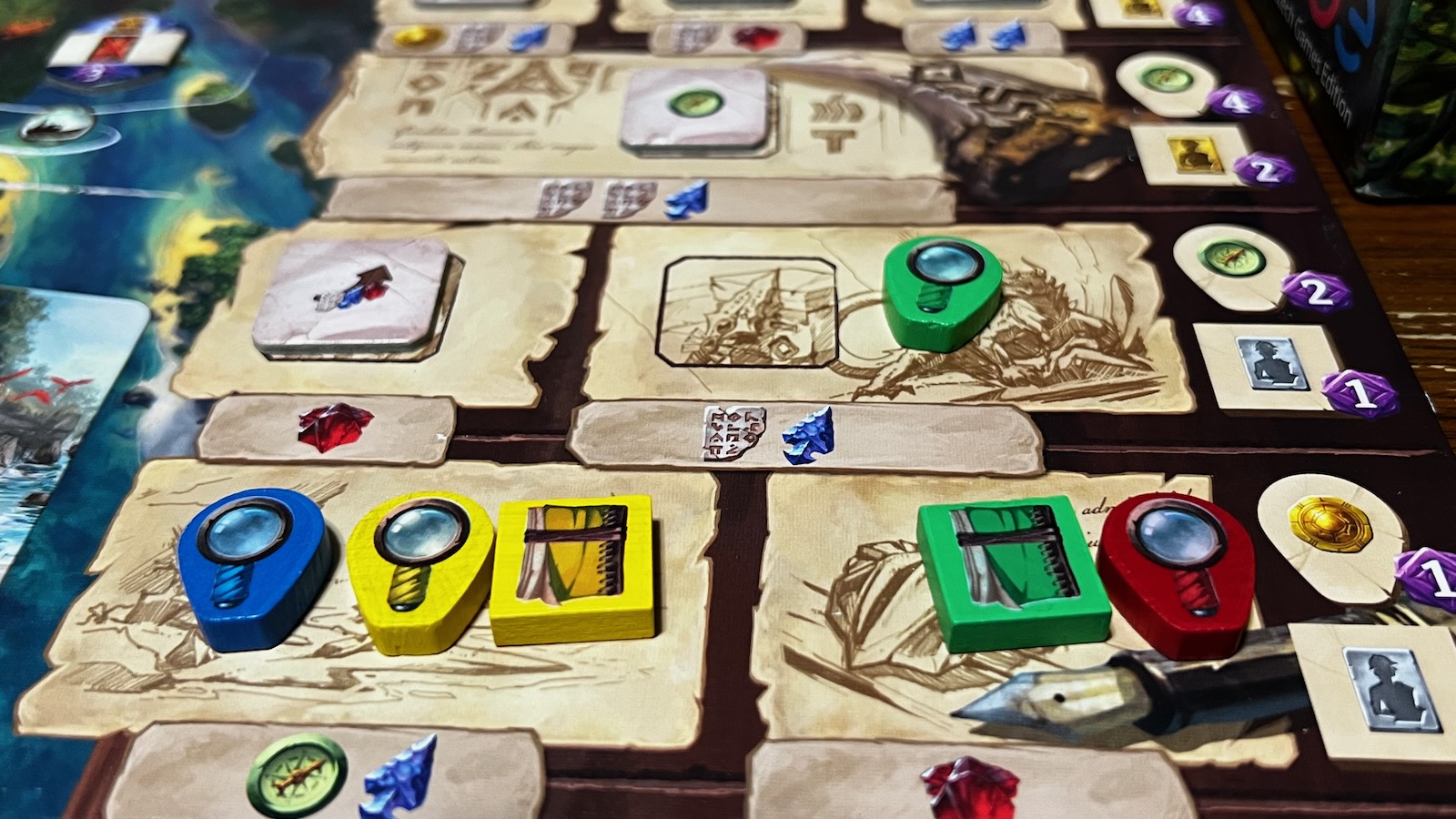 Another major action that a player can take is placing their explorers on the different sites around the board. The base camp spaces give players valuable resources needed to pay for other actions around the board. Other options to explore are the level one and two dig sites. Each of these sites has a compass cost to discover, but come with bonuses in the form of idols and resources. Each newly discovered site is also inhabited by an island guardian that you must overcome by the end of round. Each guardian has a cost a player must pay, but gives the player a one-time bonus and five points if they are defeated. If a guardian is not defeated by the end of the player round, then the player gains a fear card and opens up the guardian for another player to overcome. 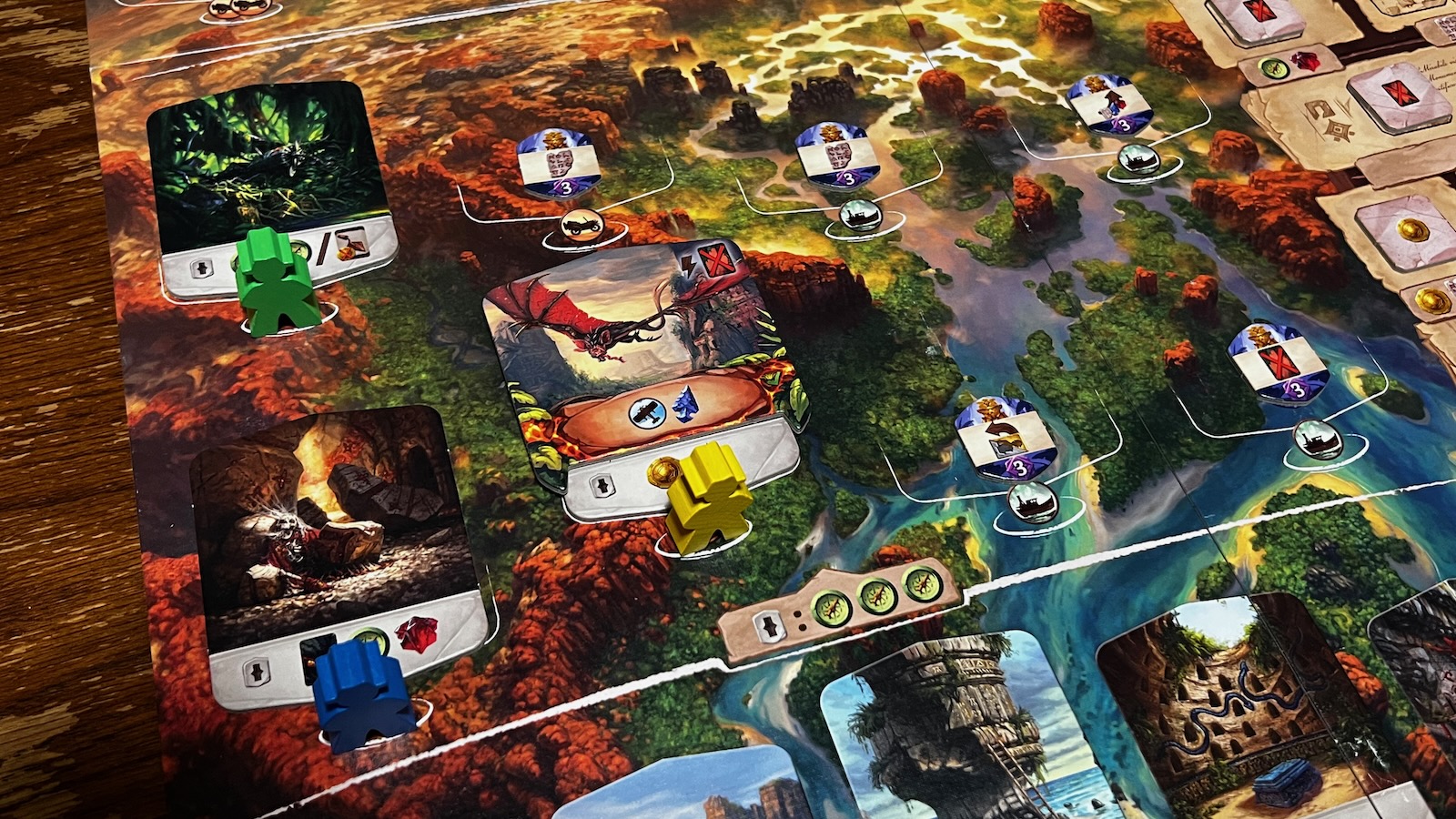 There are a number of fast or lighting actions players can use throughout the game. These fast actions can be used as many times as a player would like throughout a turn in addition to a main action. This allows players to discard cards, use their researchers, and even use special idol spaces on their boards for quick resource collection.

Over the course of a round, players will take one action a turn (in addition to any fast actions) and the play revolves clockwise until everyone has passed. The clean up phase allows players to shuffle up their played cards and put them at the bottom of the deck. Players retrieve their explorers from the board and draw back up to the five card hand. The cards on either side of the moon staff are exiled from the game and the staff moves up one more space on the round track. The markets are filled and the first player token is rotated. 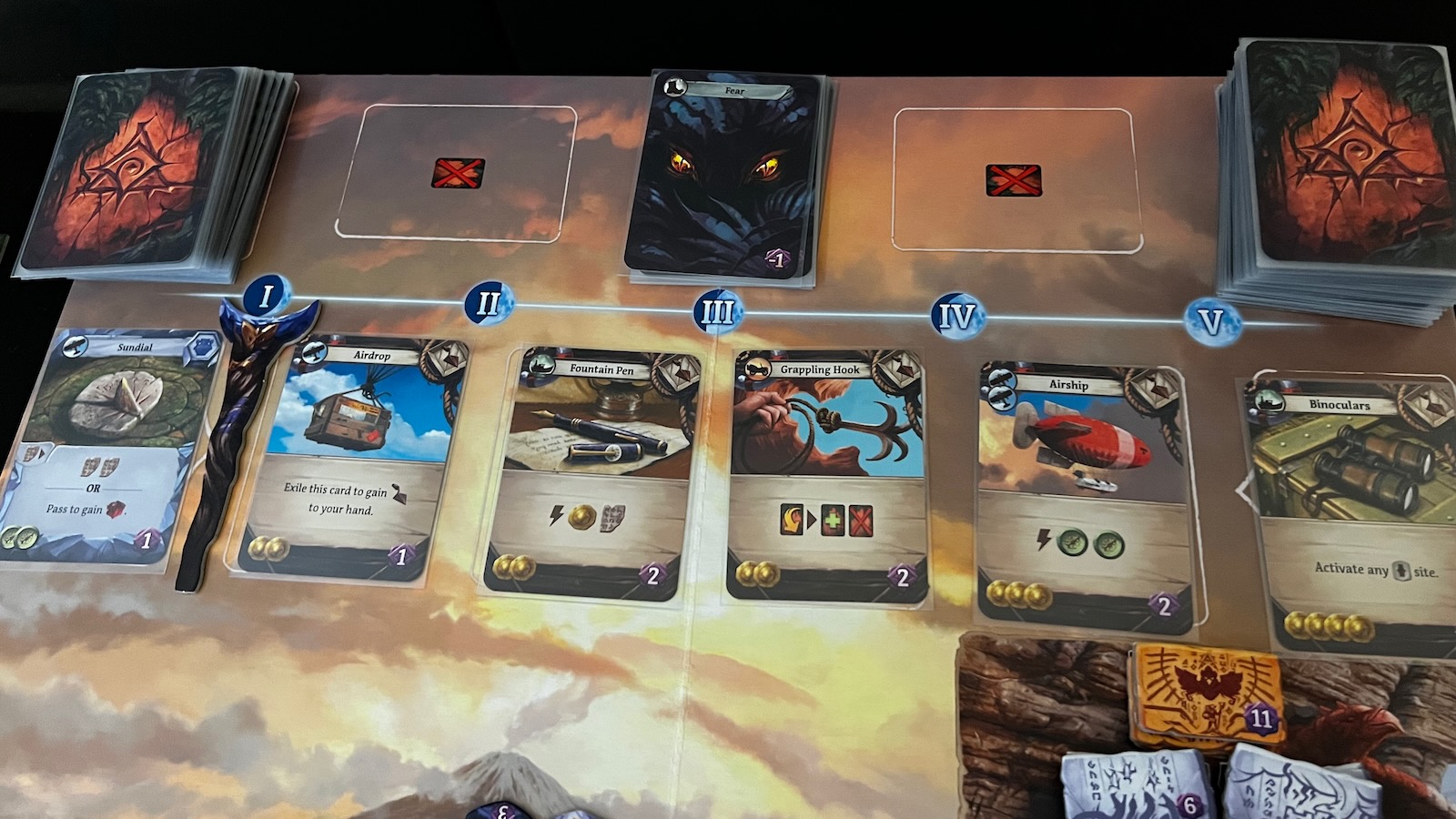 The artwork and components of this game are fantastic. The two sides of the board are similar but have subtle differences. One side shows an eagle temple and a calm island featuring a volcano steaming in the distance. The snake temple side shows the volcano erupting and features a more chaotic map and research track. Every card, aside from the starter decks, has an unique name, artwork, and ability to help supplement your deck. Each temple guardian and discoverable location are unique in the same ways. The tablet, arrowhead, and gem tokens are also made of a quality plastic and add to the aesthetic of the game. However with this quality of tokens, it makes one wish that the compass and money tokens were given the same treatment and not just made of cardboard. 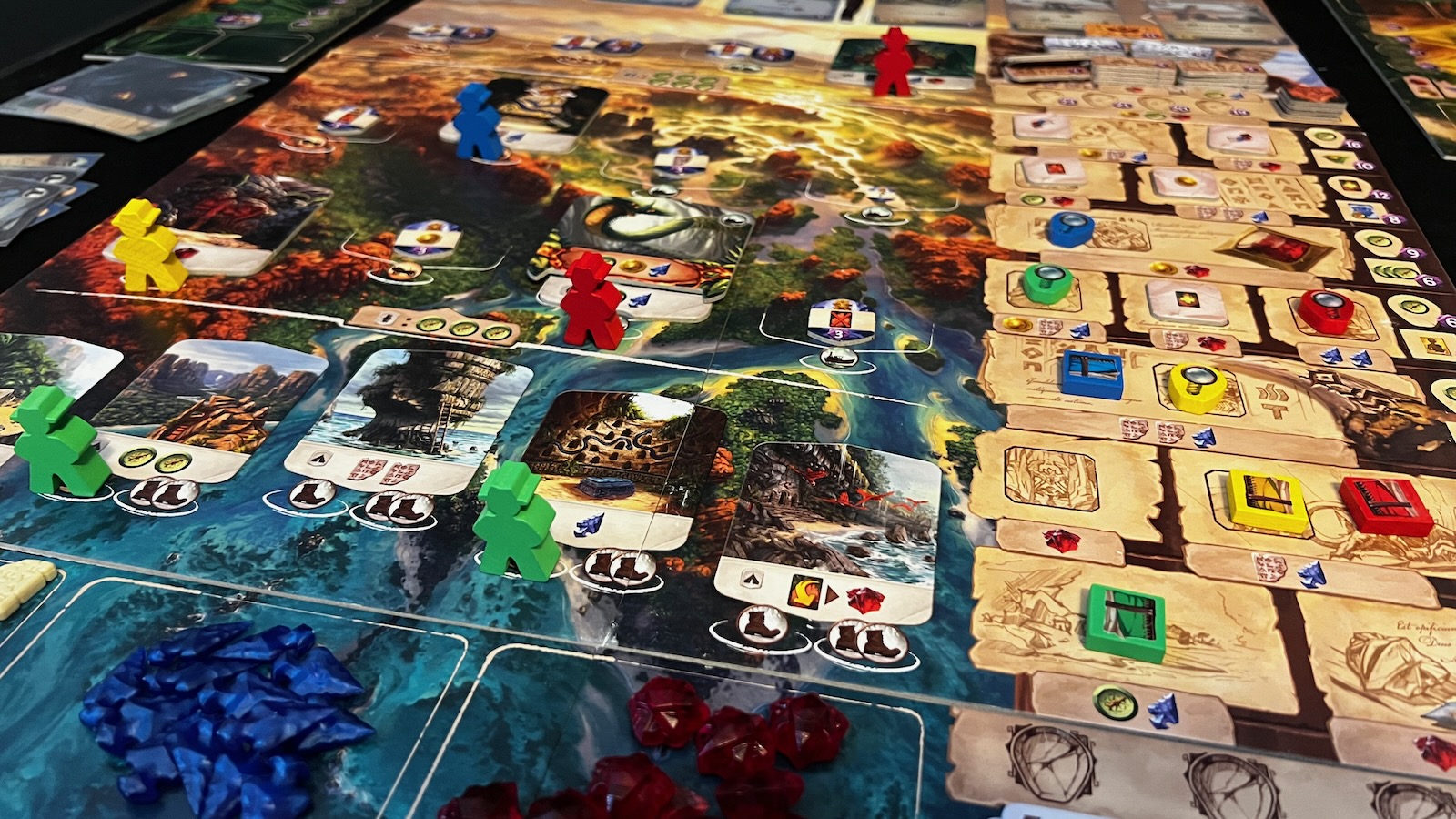 Lost Ruins of Arnak plays great at all player counts, including a robust solo mode. The solo adventure has you squaring off with a rival expedition leader. A deck of tiles is set up at the beginning allowing the players to set their difficulty with the number of red vs. green tiles in the solo stack. Each tile denotes what action your rival will take and can take away the exact space you may need on the board. The creators also released a solo campaign through their website that has variable set up and win conditions for each scenario. The two player game seems to be the most lacking out of the player counts with three and four being the most strategic. The two player game lacked the exploring and spaces available for gaining resources. The lower player count also resulted in a lack of cards being bought and less cards available to be seen and purchased. 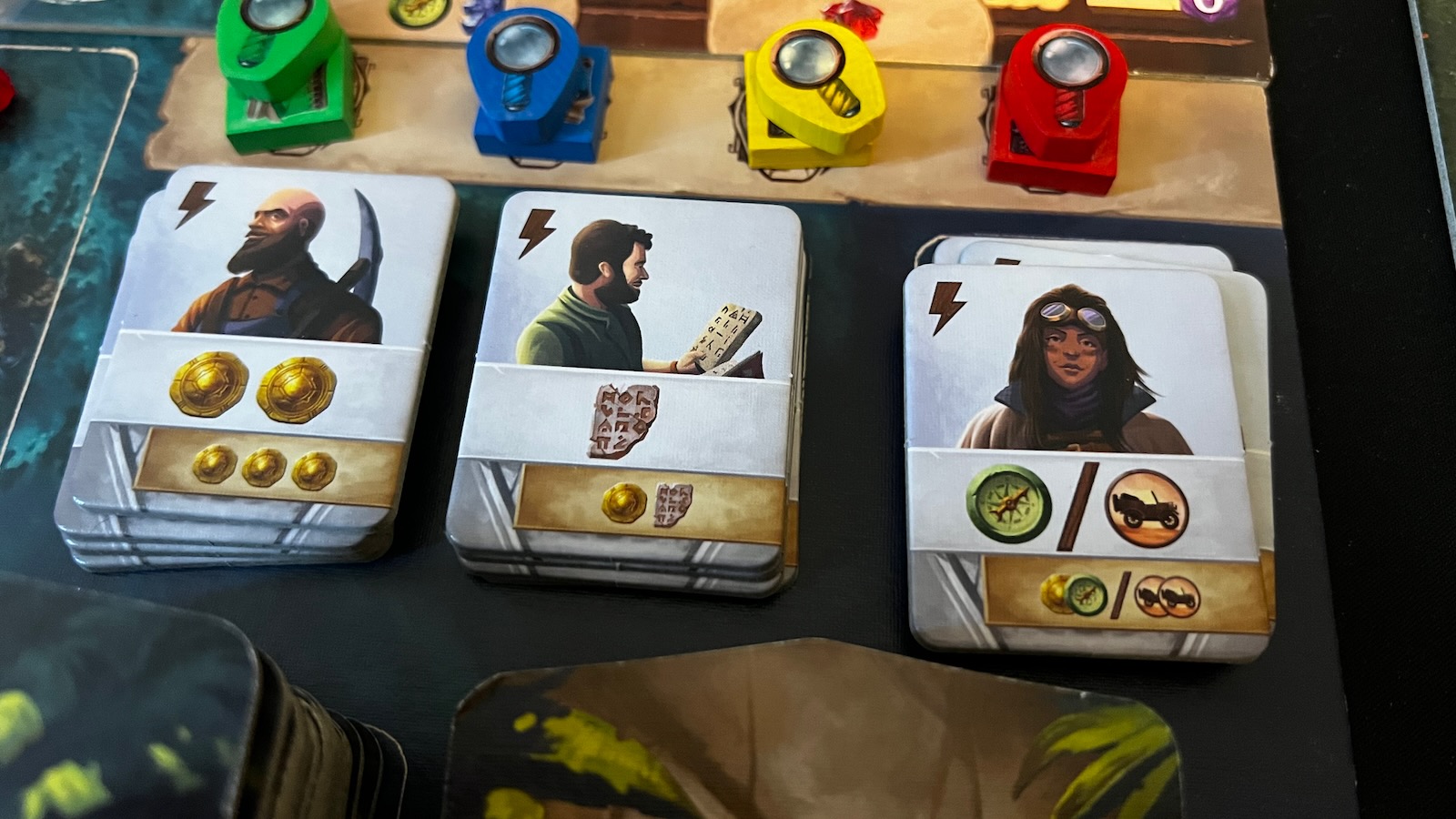 The gameplay weaves the theme through the worker placement, deckbuilding, and resource management mechanisms seamlessly. While the game favors the player who can combo actions and think ahead, it doesn’t feel so heavy that new players can’t pick it up quickly. Players have the opportunity to try different strategies to get to the high score. In one game, a player may focus on exploring, while another may focus on the research track, while another may focus on building the deck up with high level cards. On the downside, unless people are buying items and relics, you won’t see a wide variety of cards to build your deck from. The storage box is also an odd shape compared to most and the lack of insert means an unorganized mess when opening up for a game.

With a great theme and a blend of classic gaming mechanics, Lost Ruins of Arnak hits the spot for an immersive gaming experience. The variety of strategies and the randomness of what items, sites, assistants, guardians, and relics you will encounter give this game a high replayability factor.