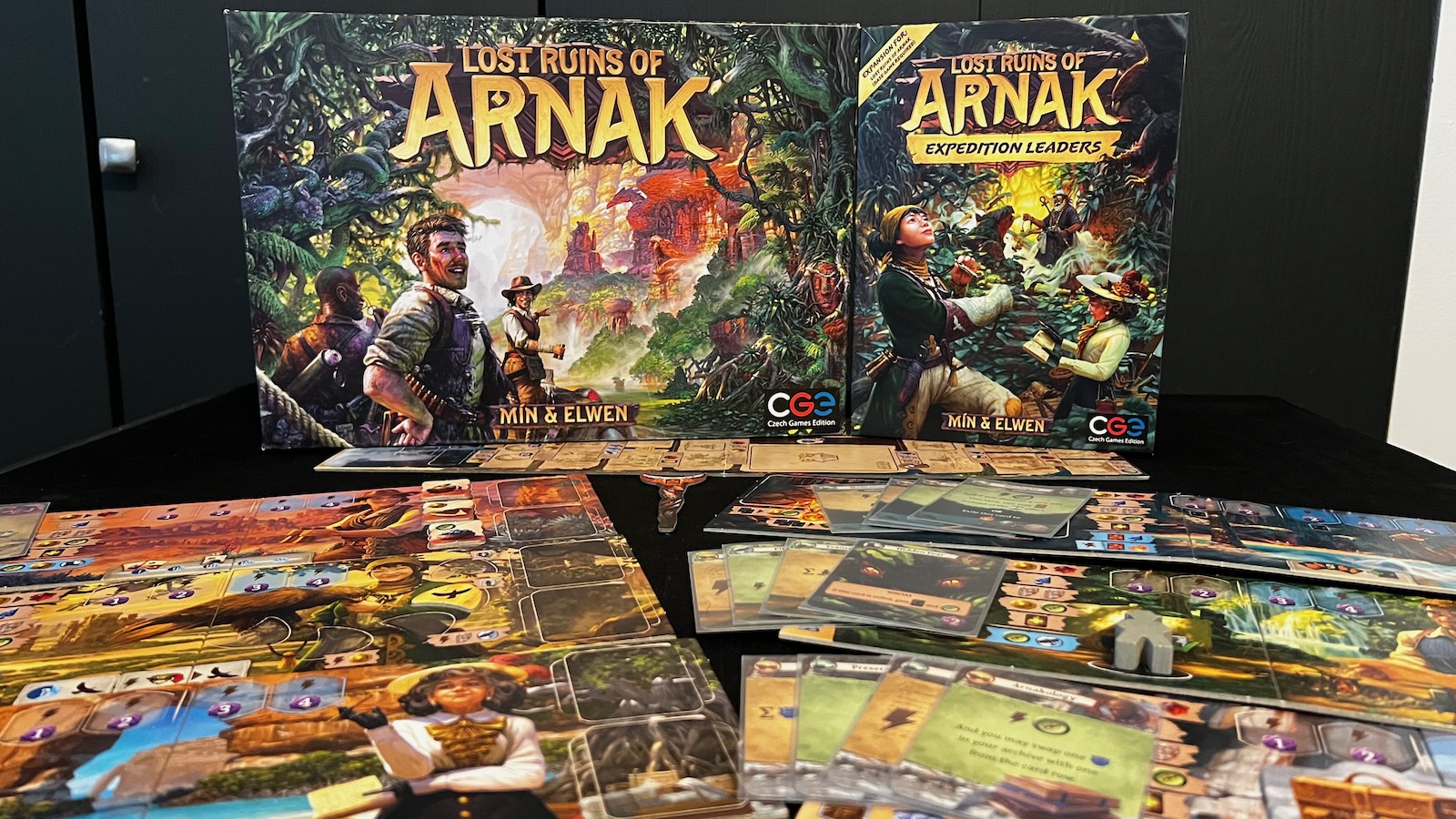 For an overview of the base game of Lost Ruins of Arnak, check out our review here. In a nutshell, you are an expedition leader searching for riches and fame by exploring the jungle for temples, lost sacred sites, defeating guardians, and outmaneuvering your fellow explorers.

So what’s new? In the base game, everyone started on a level playing field. Expedition Leaders gives each player an explorer with unique abilities and starting decks. The expansion also has a set of new item cards, artifact cards, sites to explore, and guardians to overcome which are all integrated with the components of the base game. A main board overlay also introduces two new research tracks that add protective guardians, artifacts, and a volcano that destroys discovered sites. A new moon staff adds a variant to cycle through more item and artifact cards between each round of the game. 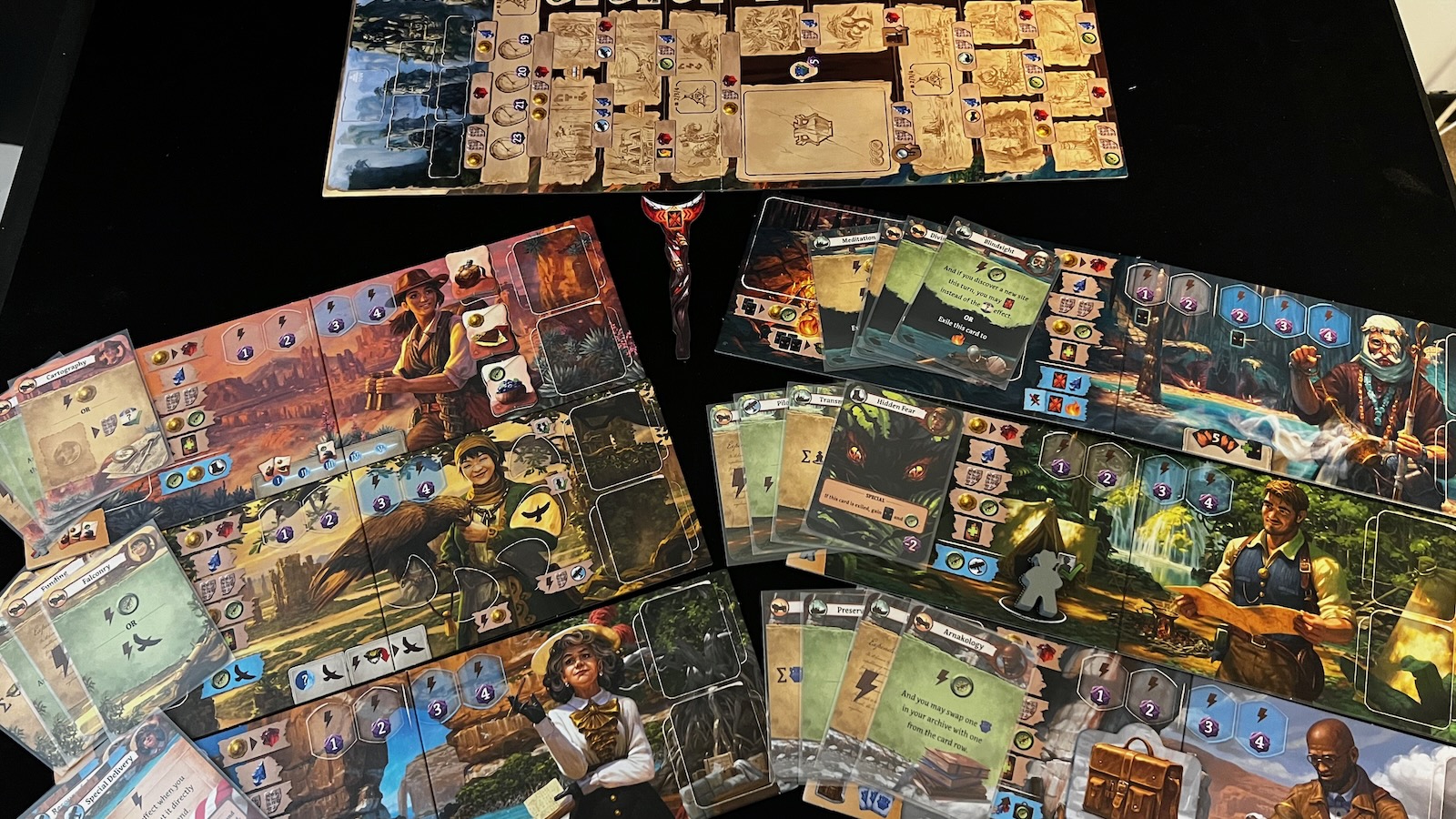 The Explorer uses only one archaeologist figure and instead purchases snacks to use their archeologist up to 4 times in a round. A few of the Explorer’s starting cards also use these snacks to gain different resources. The challenge for the explorer is balancing their resources and the locations they need to visit. Part of the strategy is figuring out when to move, as to block other players. 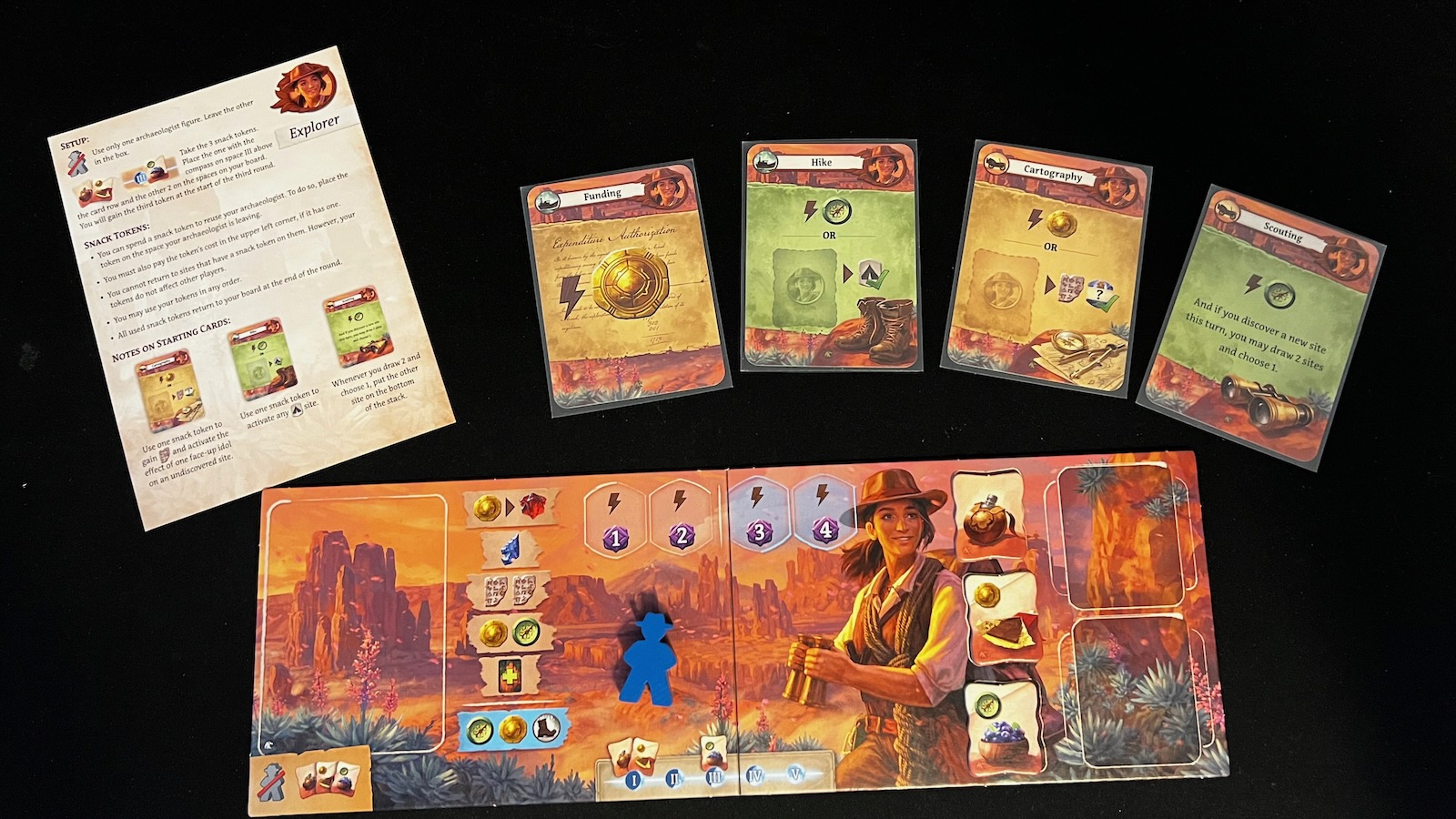 The Falconer is in possession of an eagle that can be charged up to give the player different resources and abilities. The longer the Falconer waits, the better the ability. Once used, the eagle resets to 0 and must be charged again. The Falconer must balance their immediate needs with needs down the road, adding a press your luck component to her play. 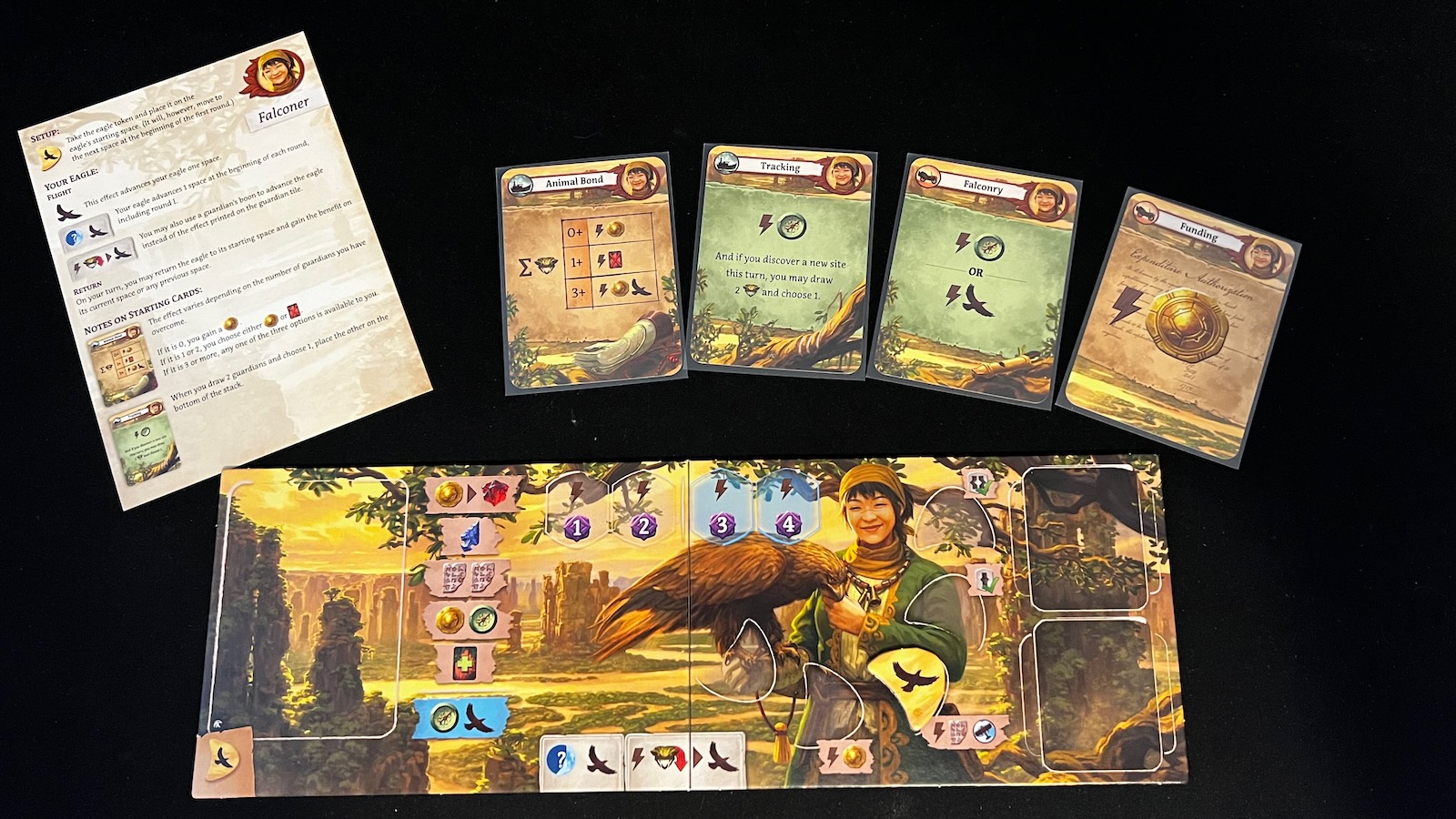 The Mystic utilizes fear cards to perform rituals which unlock resources and abilities. When exiling fear cards, the Mystic stockpiles the fear and discards their starting cards to use the fear to perform special actions. The strategy for the mystic comes in balancing the fear coming in and the fear going out. 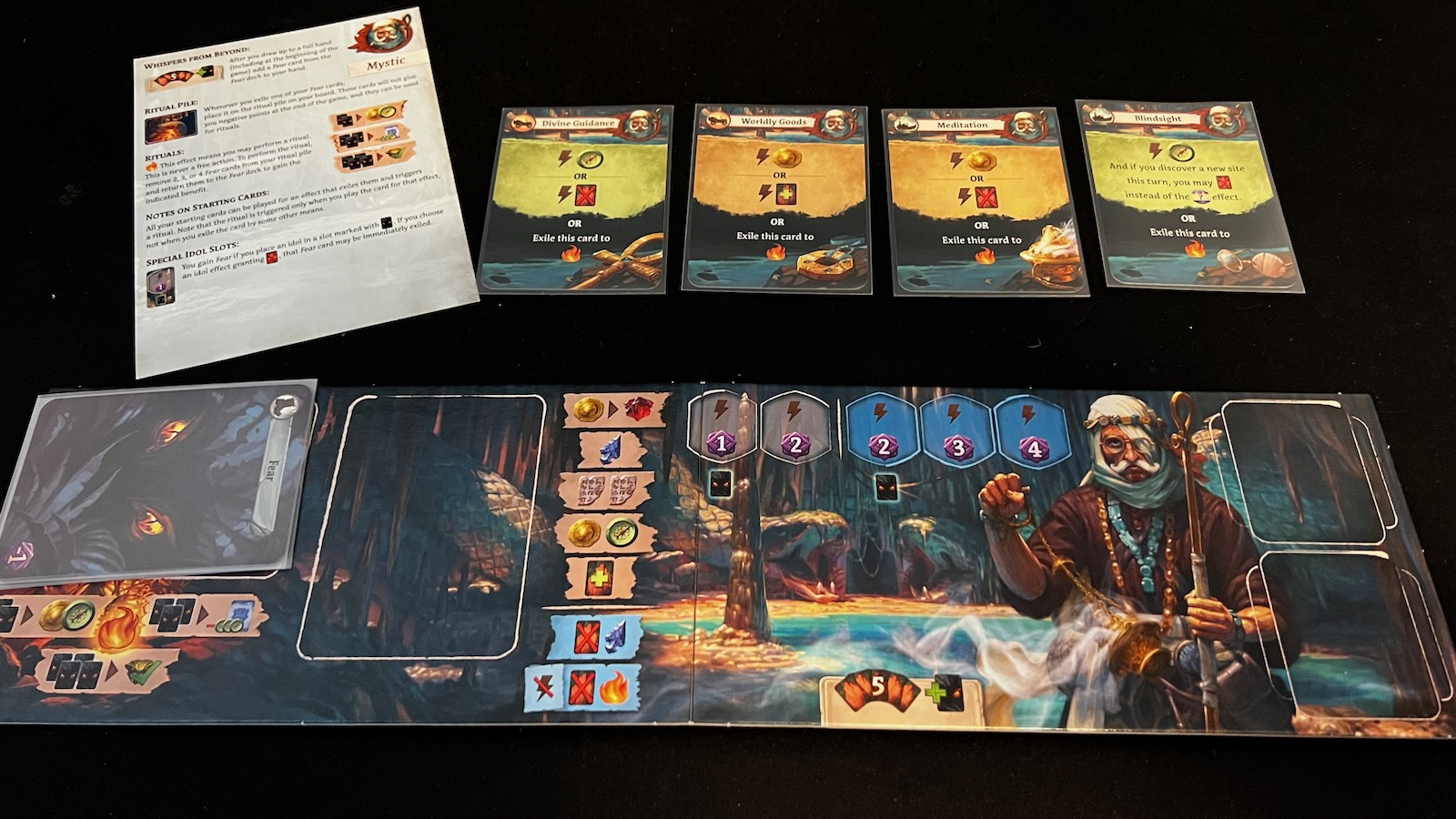 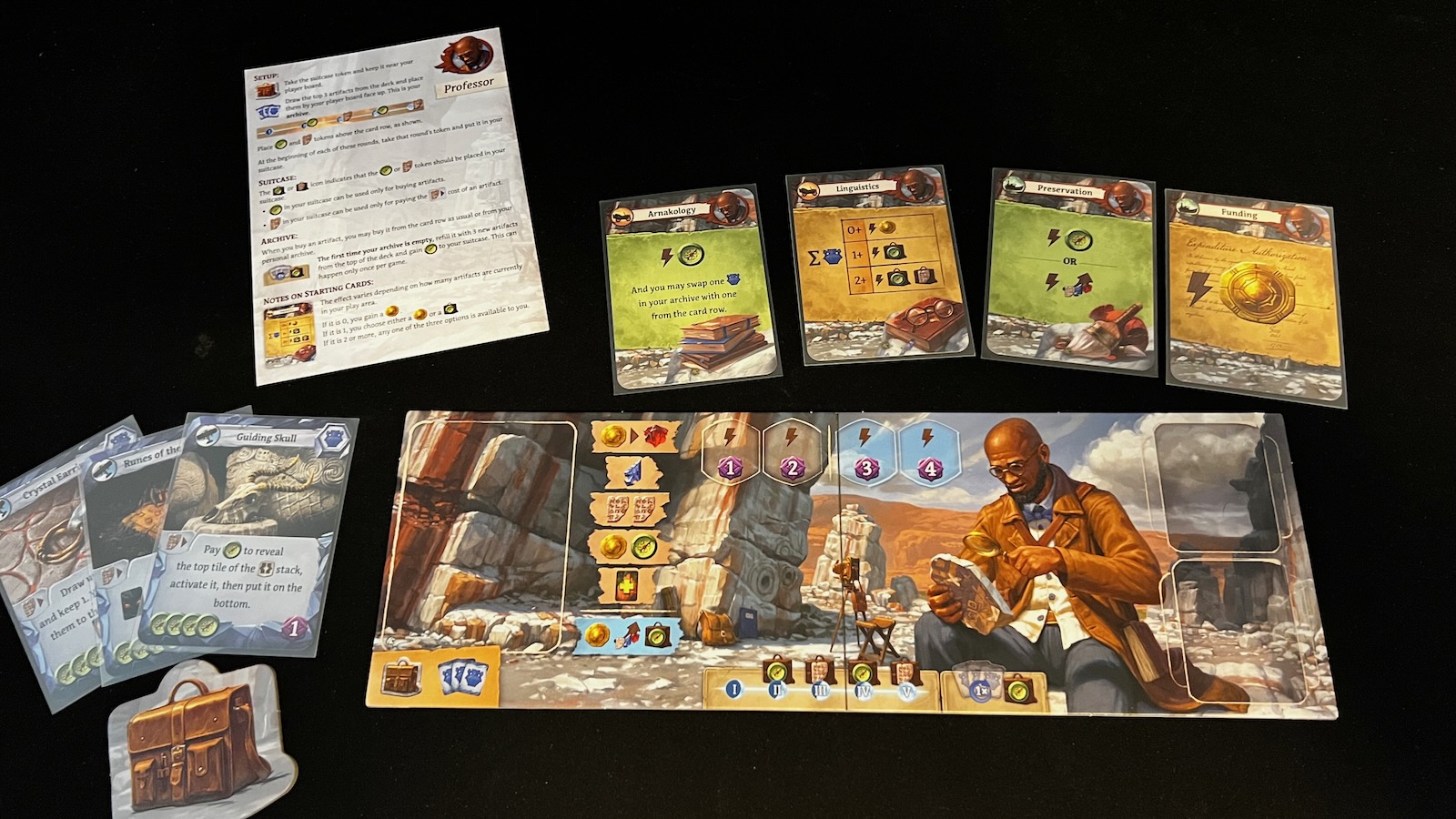 The Baroness is a master of items. Each round, the Baroness gains extra gold and uses her “Special Delivery” card to put a newly acquired item straight into a player’s hand. She begins each round with this “Special Delivery” card. Gold is king for the baroness, who ends of spending most of her time in the item market. The trouble with having so many cards in her deck, is that some items, once used for the first time, do not resurface until much later in the game. 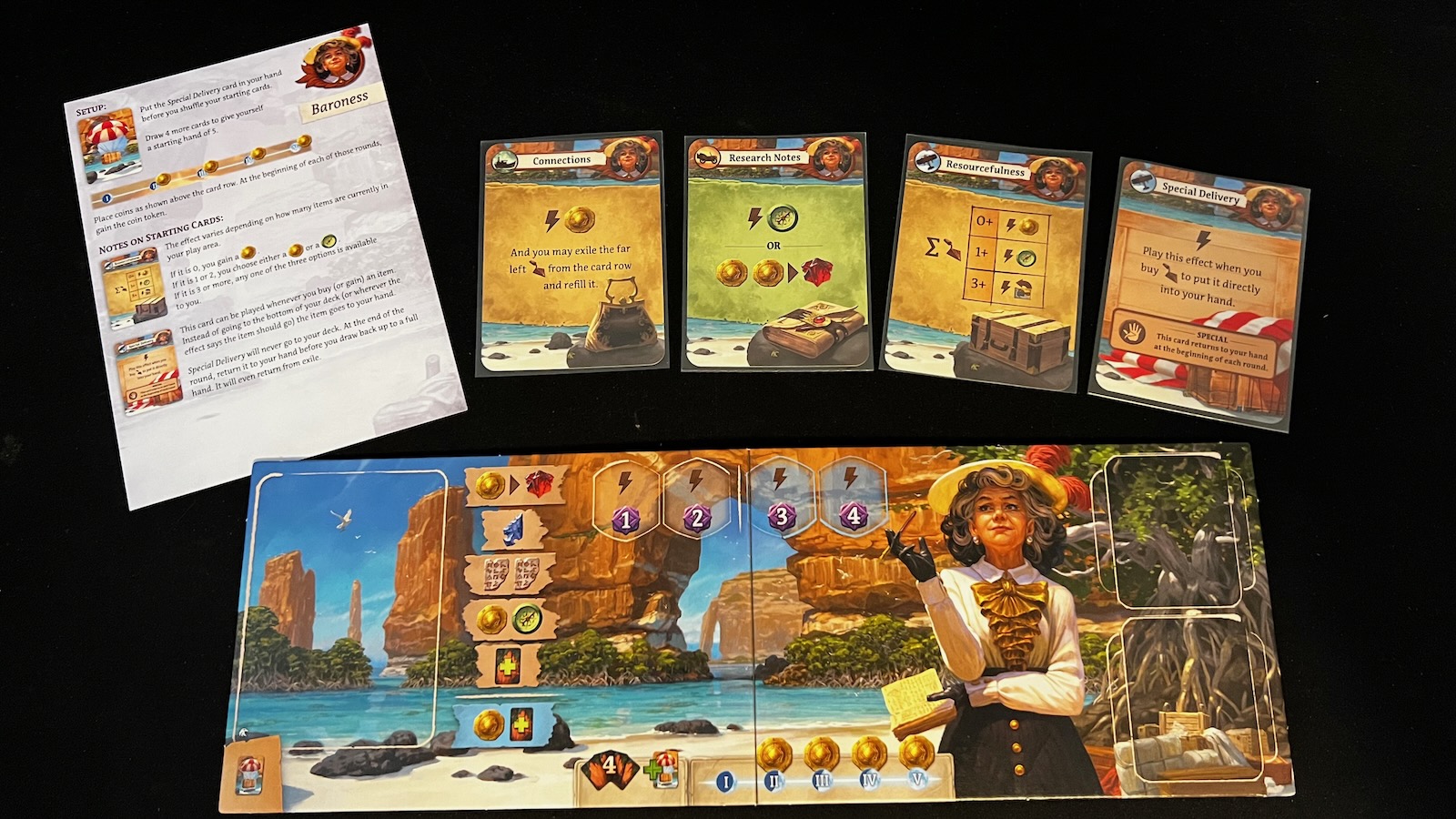 The Captain gains an extra archeologist. His player board also has a special site that activates the silver side ability of one of the available assistants on the main board display. The Captain has to strategize how to use his extra archaeologist. Does he take the extra explore action or does he utilize the the assistants available in the queue. Timing is everything with his placements.

The Expedition Leaders continues the trend of beautiful artwork and the uniqueness of every card, exploration sites, and guardians. The new items in the deck offer double exploration tiles to make exploring easier. The new guardians and assistants offer ways to trade exploration tiles for their benefits. The new research track offers some fun new spins on the temples to help the players who like to balance their exploring and researching actions. Every play offered a fun new strategy to perfect!

The Expedition Leaders expansion is a must for fans of the base game. The new characters help focus a player’s strategy throughout the game. The new elements also lead to numerous avenues to replay the game. Combine different leaders, different temples, and different sides of the board for a wide variety of gameplay variants.

Dan is a newly married educator from Colorado. Growing up as an Air Force dependent gained him lots of new perspectives on the world and a love for making new friends, especially over a good board game. When not at school or playing a board game, Dan is probably at the gym or a local sporting event. Dan loves heavy euros, adventure, and living card games.
Related Articles: Lost Ruins of Arnak: Expedition Leaders, Tabletop
Share
Tweet
Share
Submit