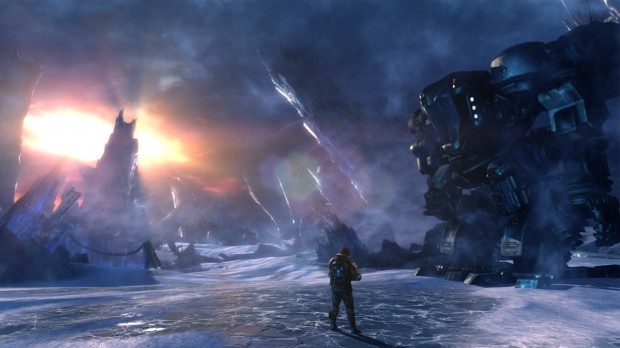 Say what you want about the Lost Planet series (no, really–go ahead), but it certainly has a way with making every iteration completely different than the rest of the series. In the first game, Lost Planet, we got an over-the-top single player story that bordered on being anime, with a heavy focus on action-packed robot battles in a frozen wasteland. With Lost Planet 2, we moved out of the cold and into a 4-player co-op game that didn’t really have a story so much as it was a series of bizarre vignettes. Approaching Lost Planet 3, I wasn’t sure what to expect, and Capcom didn’t disappoint, by turning the series on its ear yet again with this latest title.

In a prequel tale, Lost Planet 3 returns to the frigid planet of EDN III, which means that players will see a lot of snow. It sets up the core conflict in the original Lost Planet game and helps give context to the world fans have come to know. The story follows James “Jim” Peyton, a junior employee for the NEVEC corporation, who helps his employer harness the vastly valuable T-energy, which is supposed to solve the energy crisis back on Earth. Of course, there is also an indigenous people who don’t want that to happen and, after a change of heart, the protagonist goes native, putting the game into the “Sorry For Colonialism” vein of stories that most people will remember from James Cameron’s Avatar. If this all sounds painfully cliche, it’s because it is, but the good news is that it’s at least well-done. Peyton grows on you with his well-mannered working-man attitude, and the conversations he shares with his wife on Earth via video messages are well-written and give the character a strong motivation. Story being the weak point of previous titles, it’s actually Lost Planet 3’s strong suit, and a welcome improvement.

The gameplay in Lost Planet 3 is on the opposite end of the spectrum, being the game’s core weakness. It features a linear series of hallways, wherein Jim picks off countless hordes of weak bug-like enemies before hitting some switch that finishes his objective, but not before ending things with an unimpressive boss fight. This process repeats itself, with the only major change being that later in the game you fight hostile humans in addition to bug creatures, who possess the same AI as the previous foes, and show that the mindless bugs don’t act mindless by design. The boss battles require the player to press the dodge button and then shoot a glowing orange target repeatedly, as do all of the battles in the game, making the monotony almost unbearable when experienced in long stretches. Luckily, the fighting on foot is broken up by frequent sequences wherein the player controls Jim’s Rig, a giant robot that can smash things. This breaks up some of the repetitiveness, especially since most boss fights contain a portion that involves using the Rig to deal the final blow. Unfortunately, the gameplay is essentially the same, waiting for the enemy to attack and then counter as you would on foot – only slightly more awesome. The weapons Peyton can acquire and upgrade are also disappointing, as most are an unmemorable burst-fire or large, single blast that do more-or-less the same thing as the last weapon. Lost Planet 3 is also supposed to be open-world, but it isn’t. There are a few unbeaten paths full of snow, enemies, and maybe some hidden T-energy canisters and equipment, but none of it is worth the trip you’ll make, as there aren’t any unique experiences to be had. Overall, the gameplay serves to undo the success that Lost Planet 3 has to offer with its story by making it a chore to get to the game’s conclusion.

The presentation of Lost Planet 3 is a mixed bag. A few of the voice actors do great job, but the ones that aren’t good are really, really bad, and the good actors don’t help the bad ones look any better. The graphics are the same, with pre-rendered cutscenes being very impressive and gameplay looking generally above average, but it is made inconsistent with many cutscenes looking very low-quality and several animations that are painful to watch. While the icy hellscape has never looked more jaw-droppingly good, some things are too faulty to overlook, like the awkward grapple-hooking animation that never gets any easier to watch. The music and sound effects are equally puzzling. Some of the creepy ambience and western tracks that play when Jim is in his Rig are quite good, while most of the battle music sounds like it was taken from a cheesy nineties flick. The whole presentation feels like a great team started working on Lost Planet 3, and then went on vacation after a month or two and left the interns to finish the game up for them.

There is a multiplayer mode in Lost Planet 3, and it brings some interesting elements to the table, such as a unique gametype that combines the classic capture-the-flag mode with a cooperative monster hunt, but it is plagued by the same gameplay issues as the main campaign. The combat simply is not fun, and this causes the multiplayer to become dull after the second match. Furthermore, I experienced a pretty low volume of participation during my time on the Xbox 360 version of the game, and so oftent faced off against one or two other people, and never got to full enjoy the online experience anyway. Also, I got my ass handed to me pretty badly by every single person I played against–it was a humbling experience, unwelcoming to novice players.

Lost Planet 3 is another unique departure from what anyone was probably expecting from the third installment in the series, and it has as many failures as it does successes.  The improved story and mostly good voice acting is a vast improvement over anything the series has seen, and the graphics and environments are mostly impressive. But this game is nothing but inconsistent, and the high points are immediately followed by an hour or two of monotony and disappointment. If the game had just captured the fun element that some of the previous titles in the series have done better, it may have been enough to save this game, but they missed it completely. With a $60 price tag, Lost Planet 3 does not provide an experience worthy of the asking price, but I would recommend picking it up in a few months when it costs half of what it does now. If anything, Lost Planet 3 shows that the series has had a rough run, and while it has made some improvements, it continues to fall short of the potential that fans know it has.