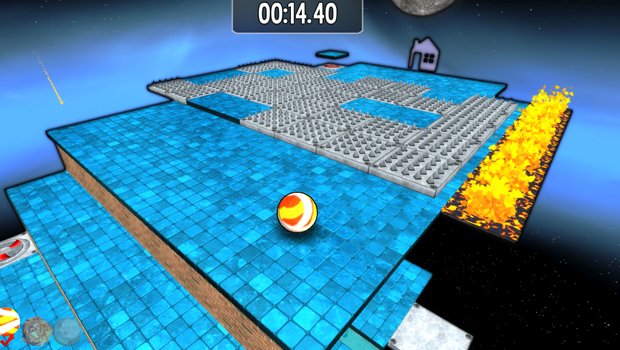 Indie team Binary Takeover gets right to the point in advertising their latest release, Lost Marbles: it’s a game that combines the smooth 3D ball-rolling mechanics of Marble Madness with the ‘manage up to three characters at once’ perspective of classic puzzler The Lost Vikings. That’s a pretty unique mash-up between a pair of solid, if disparate titles – but Lost Marbles proves that it’s a combination with real potential. While at $9.99 it’s asking a bit much in a world of cheap, well-polished indie titles and deep discounts, the creative puzzle challenges it poses to the player – along with a very intuitive, simple control scheme – make it worth a look from anyone eager to add another challenging title to their puzzle game library.

Lost Marbles’ concept is pretty straightforward: control and guide a marble, or marbles, from the beginning of a level to the end, and – if you have a competitive itch you like to scratch – do so as quickly and efficiently as possible. There are three types of marbles you’ll control: First, a rubber marble that can jump, survive in water and nullify electrical damage. Second, a paper marble that can shrink its size to fit into smaller spaces and be carried away on targeted gusts of wind. Third, a metal marble that can be affected by magnets, ignore hazards like fire and spikes, and suddenly rush forward to slam through barriers or launch itself in the air via ramps. As you progress through the three ‘worlds’ of Lost Marbles, you’ll face increasingly complicated puzzles – including ones that require you to control two, and later three, marbles each level. All of the marbles must reach the end of any given level in order for the stage to be completed, and lengthier puzzles tend to have mid-level ‘checkpoints’ you can restart at in the event of a (wait for it) lost marble, rather than having to play the entire level from the beginning. The puzzle variety is diverse, and strikes a nice balance between hand-eye coordination style challenges (such as jumping from platform to platform without falling, while said platforms move toward and away from each other), and straight up puzzles (such as figuring out which buttons on the field need to be pressed down by the presence of a marble or block in order to allow the progress of another marble to continue).[singlepic id=15937 w=320 h=240 float=right]

The game features 30 total levels, divided into 3 sets of 10 worlds each – with world 1 focused on control of a single marble, world 2 focused on control of 2 marbles, and all three marbles represented for world 3. The controls are incredibly simple, particularly for a desktop setup – simply roll your ball with the W/A/S/D keys, and alter your camera angle by moving the mouse. Pressing space activates your marble’s aforementioned special abilities, while the E key lets you switch between marbles on levels where more than one is present to control. In addition to the 30 ‘normal’ challenges themselves, Lost Marbles also offers some amount of online competition by way of recording and posting (if you login to the Binary Takeover’s service) how long it took you to finish any given level. Beyond this, a ‘hardcore’ mode is available, tasking you with having to complete the levels perfectly and in order, with failures sending you back to the beginning of the previous level. The online time comparison is a nice touch, but probably won’t appeal to most gamers – the scoreboards are already dominated by players who have level completion down to a science, and the static nature of the game’s content ensures that barring terrifying levels of perfection, the top ranks of the boards are going to remain exactly as they are. Hardcore mode, meanwhile, is so punishing that it will only appeal to the most dedicated and/or masochistic of gamers – though the team is to be commended for providing some truly challenging, and entirely optional, difficulty to their game.

The actual puzzles are rather well-executed, and some of them are quite thoughtful. Initially starting off with levels as simple as ‘move your marble largely in a straight line and get to the exit’, by the end of the game you’ll be managing the fate of three marbles at once – getting your metal marble caught in a moving magnet in order to get in position to launch through a barrier and weigh down a button, allowing the paper marble past a flaming barrier so it can compress itself and roll under a small space to get at a button, which will then allow the rubber marble to… well, you get the idea. It’s intricate, it’s complicated, but more than that – it’s fair. While some amount of reflex-based action is present in the game, by and large the barrier keeping you from progressing through any level is the deviousness of the puzzle itself, and finishing a challenging level gives some certain satisfaction. Some of the ‘checkpoints’ are spaced a bit few and far between on a given level, though for the most part these ‘backup’ locations are well-placed, and are definitely welcome.[singlepic id=15939 w=320 h=240 float=left]

Lost Marbles is a dry game. There’s no story, no context to what challenges you’re facing. You’re simply thrown into a world inexplicably populated by marbles and challenges to surpass, and aside from the tutorial and the bare existence of the puzzles, you’re pretty much left to your own devices. I’m not saying this is a bad thing – it just makes Lost Marbles stand out a bit starkly, especially in a modern indie scene where even games like Cookie Clicker vaguely gesture in the direction of some in-character motivating factor. The graphics are simple and serviceable, as is the music – but the accent here is on ‘serviceable’. They’re otherwise rather forgettable, but at the very least you’ll never find the graphics or effects getting in the way of the attention you need to pay to finish a level. The one problem is that this amount of dryness makes the $9.99 price point seem a little high – or at least, steer away gamers who may be looking for a mere fun diversion to add to their gaming library, and leaving behind only those who are truly puzzle-game fans.

But still, Lost Marbles is a solid, decently polished game that delivers some well-crafted challenge in a crisp, no-nonsense package. It’s also yet another game elbowing its way among the crowds in Steam Greenlight, and a demo is available for those who want to sample the gameplay before committing themselves to the full purchase price. If you’re on the hunt for a new puzzle game to challenge you, this one’s at the very least worth a look.