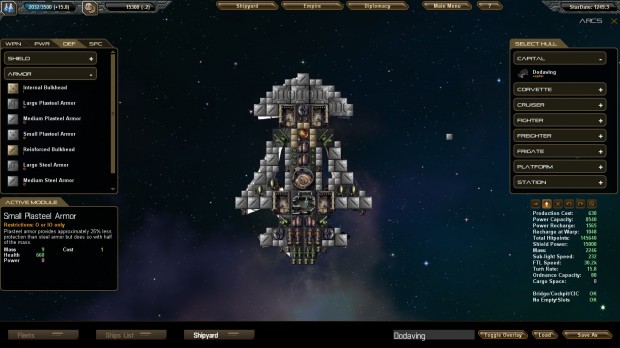 The thing about Stardrive is that it really knows how to draw you in as the latest entry in a struggling 4X genre (in which you eXplore space, eXpand your borders, eXploit your colonies, and eXterminate your adversaries).  The debut effort from Portland-based Zero Sum Games stands out from the crowd with it’s beautiful visuals, quirky sense of humor, and promises of unique action-based combat. It isn’t until you spend a few hours in the game that you’ll start to notice the cracks in the facade that ultimately keeps this one from reaching the heights of its idols Galactic Civilization 2 and Masters of Orion 2.

One of the best things about Stardrive is how irreverent it is to a lot of geek culture. Alien races are a mix of silly and bizarre, ranging from katana wielding Space-bears to Chtulu-esque horrors from beyond reason and imagining. My personal favorite was the Volfen—german accented werewolves who look like they’re at the helm of a submarine (wolfpack, get it?). References to other sci-fi properties abound, from Half Life 2 to Star Trek.

[singlepic id=12320 w=320 h=240 float=left]Stardrive was very clearly a labor of love, and nothing shows that better than the visuals. Stars shine, planets whirl around their orbits, and starships explode in a beautiful cacophony of flashing lights and crashing booms. The real highlights are the diplomatic screens—stay with me here—where you’re treated to some truly stunning artwork. But whether you’re looking at the Diplomacy window, the Research window, or the main screen, you’ll rarely have trouble finding your way around the interface, which is a pitfall a 4X game can easily fall into.

It’s also clear that Zero Sum put a lot of care and effort into their music. Stardrive’s soundtrack isn’t quite so bizarrely fascinating as something like Homeworld, but it did achieve the rare feat of getting me to pause the game for a few minutes just so I could appreciate the music being played. Playing with a minimalist electronic vibe, the score hits just the right balance of being interesting enough to listen to, but not so much so that you’re often distracted from the gameplay. Sound effects are similarly good. Weapons sound off with the blats and buzzes you’d expect from lasers and misses. Combat can be quite loud, so you may not want to zoom in all the way if you’re playing late at night.

The actual combat itself doesn’t quite live up to it’s presentation. While the description on Steam promises the ability to “jump into the fray by taking direct ‘arcade’ control of any ship in your empire,” there’s very little incentive to actually do so. Combat—especially late game combat—is a cluttered affair involving sizable fleets. Taking control of a single ship isn’t feasible when you’re trying to coordinate the focused fire of the whole fleet. It’s also a bit disappointing at how little ship construction seems to matter. Stardrive was sold on close connection between its ship-building engine and combat, but regardless of ship construction, combat largely consisted of two big fleets smashing into one another until the slightly smaller one fled or was destroyed. So long as I had moderately advanced technology, I rarely had to worry about ship facing or losses. Taken as a whole, combat in Stardrive is a flashy affair, though not as satisfying as was originally promised.[singlepic id=12321 w=320 h=240 float=right]

Ground combat, on the other hand, is a real letdown. The only two units available to the player are a race-specific infantry unit and a generic tank. What makes ground combat so frustrating is that the player has virtually zero control over units in combat. All she can do is tell her troops to land and watch as they get slaughtered without dealing any significant damage because of their inability to stay grouped together and focus fire. Ground units are also incredibly underpowered when compared to some units they’re expected to go against later in the game. I found it was far better to simply secure local space superiority and destroy enemy ground forces with specially designed superbombers.

I call them superbombers because, the way I designed these things, they were probably at least 80% bomb by mass. While not quite so mind-bendingly versatile as the ship-crafting tools in the venerable Galactic Civilizations 2, Stardrive’s ship-design platform is remarkably flexible. In addition to the aforementioned superbomber, I made an massive carrier–sacrificing weapons for fighter bays and incredible amounts of armor–and an unarmored kamikaze cruiser stuffed with weapons. While there could be some improvement in the UI, the whole system works fairly well, even if ship design doesn’t have quite the desired impact on combat strategy.

[singlepic id=12322 w=320 h=240 float=left]Like you’d expect in a space-themed 4x game, colony management is a fairly important for success in Stardrive. Each planet can be tailored to generate food, production, or research points. By choosing the structures you build on a colony you can tailor it to your needs. Alternatively, if you’d prefer a hands-off approach, you can assign an AI “Governor” to develop the planet—you simply tell it what you want. If you’re the ambitious type, you can attempt to multi-task with a planet but I found it more efficient to specialize as much as possible, and let my large trade fleet handle logistics. Yes, I said trade fleet. Crucial to success in Stardrive is intra-empire trading. Large freighters ferry resources and colonists around your empire, providing you with a nice cash bonus if you specialize in the right tech. It also limits how far you can expand outside your borders, since keeping a distant planet in supply can be challenging.

It’s at this point that fatigue starts setting in, however. Once you’ve started a few colonies, battled a few eldritch horrors, and set your empire-wide trading network in motion you realize that there’s not really much left to do. By this point in my first campaign nearly every other race was explicitly allied with me, meaning combat was out, and I’d already researched the vast majority of the tech tree. What now? There’s a running subplot about an unknown alien race called “The Remnant” but the story line isn’t very compelling and there’s no real reward for seeing the quest to the end. By this point, I’d seen the same few random events over and over by this point, so those no longer surprised me. I wondered why I was playing this long, dull endgame instead of going back to the beginning when things were fresh and exciting. So I did. And a few hours later I found myself back at the same dull endgame.[singlepic id=12323 w=320 h=240 float=right]

Stardrive is an ambitious game, but it’s also clearly unfinished. Text in the game’s meager tutorials promise abilities that are nowhere to be found. While I never had the issues with crashing that other reviewers had, I did notice my fair share of camera bugs, including one where I was stuck staring at a black sliver of space until I restarted the game. The lack of polish, combined with the lack of real endgame, really suggest to me that the Zero Sum was forced to push Stardrive out the door to get some revenue before he could continue developing.  An understandable decision, but a lamentable one.

Despite its problems, Stardrive does a lot of things very well and I’d really like to give it my recommendation…except for the hefty pricetag. It’s hard to justify recommending Stardrive over Galactic Civilizations  2, Sins of a Solar Empire: Trinity, or AI War: Fleet Command when those games offer more content for less money. If you’re a big fan of space-themed 4X games, and find it on sale, I’d say you should pick it up. But everybody else is better off leaving this one for the space-bears.