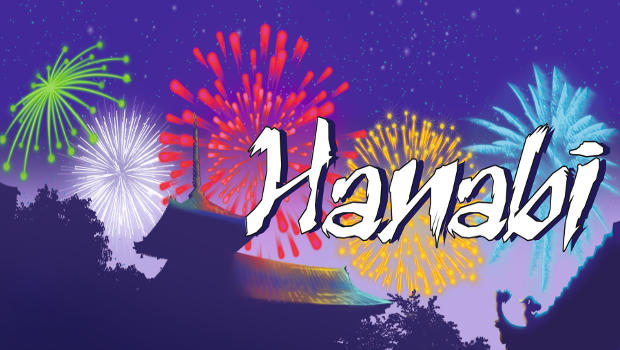 Set the rocket. Light it. Then step back and watch the fireworks emblazon the night.

In board and card game design, no designer burns brighter than Antoine Bauza. With award-winning games such as Ghost Stories, Takenoko, Takaido, the smash hit 7 Wonders, and the newly released Rampage, Bauza delivers games with beauty, strategy, and fun.

In 2013, Bauza assured his place in gaming history by bringing home Germany’s Spiel des Jahres, considered the world’s top family-oriented board and card game prize, for his cooperative card game of fireworks display management, Hanabi. What made Hanabi such an atypical choice is a set of rules explainable in about a minute, an unusual hidden information mechanic, and the downright cheap MSRP of $10.95.

Simple, unique, and inexpensive, Hanabi is a fantastic game that deserves its accolades.

Tools of the pyrotechnics trade

The rulebook fully explains the game on one tri-fold sheet, and the simple rules are straightforward, with no unclear sections or obvious oversights.

The linen-finished cards are standard USA playing card size, of good quality, and feature an Asian motif. The card face is in color, but the back is black and white—and we’ll see why in a moment.

As a team, players are charged with putting on a fireworks display. A delicate dance of timing and artistry, the display must go off as planned or else disaster may strike and the audience boos the feeble showmanship.

Hanabi demands players fire off those fireworks cards in correct numerical order according to sets of colored suits. The game contains six suits: white, yellow, green, red, blue, and (optionally) multicolored. The trick? Players must hold the cards with the values and colors facing away from them; only other players can see the suits and numbers. Players must give card clues to each other by telling either a card’s numerical value or its color. If a player’s hand contains more than one of the same color or of the same numerical value, all cards that meet the criteria must be noted when receiving a clue.

Cards must be played to the center in five stacks (or six, if the multicolored card option is played) by color, starting with the 1 card and proceeding in numerical value to 5. Only one 5 card exists in each color; misplay it and say sayonara to a perfect score. Each suit also contains three 1 cards and two each of 2, 3, and 4.

A player may take one of three actions on a turn:

The difficulty comes from a limited set of clues. Each time a player gives a clue, a clock token must be turned to the used side. With all clock tokens turned, a player cannot give a clue. Only by discarding a card in hand can a player reset one of the clock tokens and allow for further clues. Discarding any card is a risk, but especially if a player is forced to do so without any information; discard a 5 and a perfect score goes up in smoke.

A clue-giver points to the card or cards in another player’s hand to note numerical value or suit color. For instance, if it is Steve’s turn and he wants to give a clue to Heather about the cards in her hand (white 5, blue 5, blue 1, and red 3), he could point to the two 5s and say, “These two cards are 5s” or if the stack of red fireworks cards already includes the red 1 and red 2, he could point to the red 3 and say, ”This is red” or “This is a 3,” hoping that Heather might know to play her red 3. If Heather does decide to play it, she announces her intention and lays it on the table. If it works on any of the existing stacks, success!

…if Heather plays a card that cannot be placed on any stack, then a fuse token is turned over. Turn over three fuse tokens…BOOM! The explosion token is revealed and the game ends. The game also ends if players exhaust the card draw pile, with each player taking one final turn.

“It blowed up REAL good!”

To score, add the numerical values of the top cards on the played stacks. R&R Games, the producer of Hanabi in the United States, offers these scoring evaluations:

25 — Legendary, everyone left speechless, stars in their eyes!

For those who have mastered the five-suit version of Hanabi, the multicolored suit provides three variants of increasing difficulty and added points. Especially maddening: The wild-card variant counts the multicolored suit as possessing the same color as another card given as a clue. Owie!

And mastering that five-suit version of the game AIN’T easy. Having played Hanabi multiple times with varying groups of players, 19 is the best score we’ve managed. Rumor has it that one group at the Gen Con gaming convention cracked open the game and played Hanabi hand after hand for an entire day before achieving a score of 25.

With the limited information players can offer, a session of Hanabi will vary according to the participants. People communicate differently, and until players get a sense of what another player might mean (is she hinting I should play that card she just pointed out to me or NOT play it?), anything is possible in the game. This makes it a group learning experience, unusual in such a simple game.

Likewise, Hanabi is a true cooperative, since players win or lose as a team, but it doesn’t suffer from “alpha player syndrome.” One player can’t tell everyone else how or what to play, since no one player in Hanabi has all the card information and each player must give clues without assistance from others.

Remembering clues as to which card is which color or value also taxes players. Moving cards around in their hands may or may not help. And what worked last time might not work this time.

Hanabi excites. Tension fills the play. Will the right info get through to a player?

Oh, no! She’s going to discard that blue 5. She must have forgotten my clue.

Thank goodness he played that green 4 to the stacks, since we already discarded the other one!

Sighs of relief, the agony of defeat, that sense that we got to 20, can we get to 22 or better? Hanabi can truly energize a game night. Plus, there might still be time to squeeze in a second or third assault on that legendary 25 score. And then there’s those multicolored cards…

Faults with Hanabi? Sure, the fireworks theme is an afterthought, but it’s nevertheless uncommon. A tendency to give away too much info about cards–through excessive table talk, facial expressions, and “honest” goofs–also exists, though players can learn to dial it down to what the group deems acceptable. Some folks might find the play too stressful, especially if they aren’t tracking the group dynamic and make a few mistakes. Of course, others with a killer instinct who play games to crush their enemies, see them driven before them, and hear the lamentations of their women would rather die than play a cooperative game. Even then, I’ve seen a few Conan the Barbarian types come around to Hanabi. Really.

I can’t say enough good things about this little game. For the price, it packs an enormous amount of fun into 30 minutes of play. The simple rules make it approachable to youngsters too. And what better way to build teamwork and camaraderie than to work toward a higher score each time you play with your favorite group of people?

Any decent game collection will include Hanabi. It’s THAT good.

Weight: Light – “Something grandma and the kids could play”

Winner of the 2013 Spiel des Jahres (Germany's premier tabletop game prize), Hanabi is an exemplary cooperative game deserving of its awards. With simple rules, quick play, and an MSRP of just $10.95, it's a must have for any gaming collection.