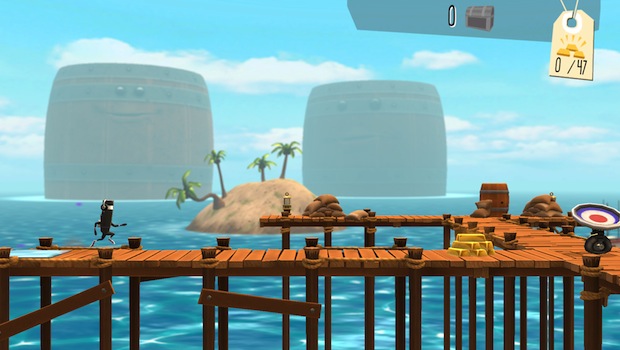 Runner2, as the game is commonly known, is a platform adventure that was developed by Gaijin Games in conjunction with Aksys Games, the publisher. It’s one of those titles that brings a ton of charm and enjoyment to the table, and right away I was enamored with the colorful menu screens, the characteristically sunny Wii-style soundtrack, and the well-written cut scenes voiced by one Charles Martinet, a man who has figured prominently in the history of Nintendo voice-acting.

Your adventure begins in “The Emerald Skies,” a land that contains puffy pink clouds, fantastical sky-creatures, and an introduction to the basic skills you’ll need to master in order to play. The controls are intuitive, and work fine on a keyboard, but I did find myself wishing I’d had a controller, as various splash screens kept suggesting. One must learn to compromise in life, however, so I experienced the game using keys. Fortunately, I found that this did not impede my enjoyment in any way.

[singlepic id=11163 w=320 h=240 float=left]As for the visuals, I imagine it’s what it’d be like if you could somehow eat Pez with your eyes. The graphics are Runner2‘s biggest strength, and make for a thrilling, engaging experience whether you’re sprinting forward on the track, sliding under electric turtles, leaping up stairs, or launching off trampolines to collect gold bars with wild abandon. When you’re on a real tear, the obstacles seem to blend into a long rainbow-trail of colors that you can’t possibly negotiate without crashing, but much of the time you do make it, blazing across the finish line and wondering how on earth you survived. On the other hand, this game should probably come with some kind of warning label about not drinking during or beforehand, or taking medication, or risk of seizure, but even if you’re sober, playing for too long can induce a bit of dizziness that isn’t entirely unpleasant, but noticeable. It’s not the worst example of eye-strain in the world, but I knew I was getting tired when the scenery had basically started to melt into an indistinguishable blur.

Crossing the finish line after making it through a series of crazy-complicated obstacles can be a rush, but there will be plenty of times when you’ll crash and have to start all over, which brings me to my next point. One of the main (but few) drawbacks of the overall game is that you can play it for multiple hours, but a good deal of that time might be spent hurtling through space back to the starting line or last checkpoint, causing you to shout expletives that’d make a sailor blush. Sometimes you have to go way back – you could be at the last obstacle of a level, having been perfect up until that point, but if you crash, it’s curtains. There is no health system – you mess up once, that’s it – and some of those levels can be downright diabolical. Adjusting the difficulty feels like a cop-out, but in the end that frustration is an inherent part of the platform genre – there has to be a fitting penalty when you die in order to keep the stakes high.

[singlepic id=11165 w=320 h=240 float=right]Minor gripes aside, the gameplay is truly exhilarating. As you learn more varied and complex moves, such as the slide-kick or riding the rails, so too does your own skill increase. Practice makes perfect, and before long you’ll be flying through complicated obstacle patterns with the best of them (you can also toggle a mini global leaderboard to see how you stack up against the real pros). There are tons of hidden rewards, providing an entertaining scavenger hunt for all you completists out there, and you can choose how quickly you want to proceed through each world, with many alternative routes along the way. There’s also a chance to pop into a bonus 8-bit round, which is pretty fun for a few minutes, but tends to come as an unwelcome interruption to the level you were tackling.

The last thing that I wanted to touch on is possibly the most important aspect of the game, which is its interactive (to a degree) soundtrack. Described as a music game by the people who made it, Runner2 is like an awesome spin-off of Super Mario Bros. that was somehow combined with Dance Dance Revolution; that, or some sort of Daft Punk edition of Guitar Hero, except it would be called Tenori-On Hero. Rhythm plays a central role, as your timing will be aided over and over by listening to the music and hitting those jumps and slides to the beat. Grabbing gold bars also creates feathery little electronic riffs that match up perfectly with the background score.

[singlepic id=11166 w=320 h=240 float=left]The musical timing aspect of the game is just one of many reasons why it’s so enjoyable to play, but the soundtrack does tend to get a little repetitive after a while; there’s only one main theme for each world, and not much variation beyond that. It’s not a bad thing, but after a few levels, the novelty begins to wear off. However, the fact that each world is so different in terms of visuals keeps things fresh and interesting, even if the soundtrack just starts to blend into the background after a while. Generally speaking, the sound design is superb, and the simple music suits the game well.

The overall impression is that of a highly professional, polished gaming experience, and I’ll admit I set my alarm early a few times this week so I could play before going to work. For $14.99, this game is a bargain, as there is a ton of bug-free content, different levels to explore and perfect, and a deep, addictive goodness that will repeatedly have you going back for just one more try.

Here is a game that was deceptively simple to learn, but tested my limits in terms of the need for split-second timing, and lightning-quick reflexes. The bottom line, of course, is that it’s fun as hell, albeit painfully addictive. If you enjoy that type of pleasure mixed with pain, and have been craving a cutting-edge platform adventure with a truly imaginative and polished visual style, look no further: Runner2 is a game that you ought to make a dash for.