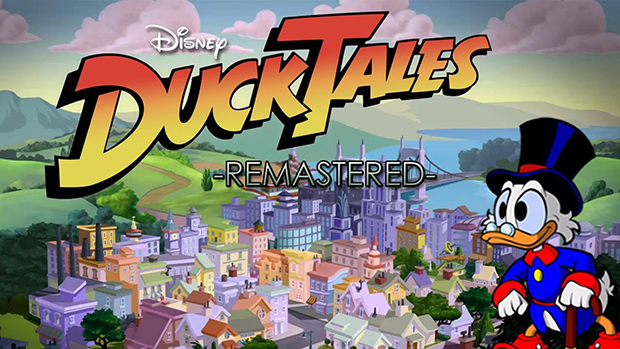 Dust off your Junior Woodchucks Guidebook. There’s another retro revival in town, courtesy of WayForward Technologies. The beloved Capcom 1989 NES platformer DuckTales makes a resurgence in the form of DuckTales: Remastered, a high-definition love letter to the original title. In its heyday, DuckTales provided gamers with non-linear levels ripe with secrets and collectibles among tight and entertaining platforming sequences. And while not all gameplay elements translate comfortably to the modern era, DuckTales: Remastered is a wonderful tribute to fans of the classic game and cartoon series alike.

[singlepic id=15184 w=320 h=240 float=left]The importance of the word “Remastered” in this game’s title should not be overlooked. This is not a full reboot or re-imagining. Rather, it is the same game as the original NES title with an updated presentation. And what fantastic presentation it is. Tickles of nostalgia are present around every turn as main protagonist Scrooge McDuck banters with the likes of Launchpad McQuack and Magica De Spell, not to mention Huey, Duey, and Louie. All of the NES game’s sprites and settings make charming returns as high-resolution, hand-drawn animations. The result is a visual flair that it’s hard to argue could have been any better.

A full story is included this time around complete with voice-acted dialogue, almost entirely by the voice cast of the cartoon series that the games are based on. It brings this iteration of the game to a more symbiotic relationship with the cartoons than was possible in the days of 8-bit consoles. The conversations feel like they could have been lifted straight from the TV episodes. This means, of course, that the all-too-polite script makes the same kind of groan-worthy jokes that the cartoon employed in its day. The flip side is that DuckTales: Remastered enjoys pronounced authenticity.

[singlepic id=15185 w=320 h=240 float=right]That same dedication to the source material extends to the raw gameplay, which doesn’t enjoy quite as pleasing a result. Scrooge’s abilities are limited to running, jumping, and using his cane to whack rocks away or as a pogo stick. The vast majority of the combat consists of pogo-ing on the heads of enemies, who almost always walk back and forth in set patterns. They also come in endless numbers, re-spawning every time the screen scrolls past them. Consequently, while DuckTales: Remastered enjoys freely roamable levels and encourages exploration, you’ll never get the satisfaction of cleaning a level of foes.

What garners the most frustration is the old-school NES approach to limited lives. Each of the levels in the game can take upwards of a half-hour to complete, topped off with a good ol’ boss fight. The levels, as well as the bosses, are challenging without being maddeningly difficult, but you only have a few tries to figure everything out. Running out of lives puts you back at square one. You may think you’ve got that boss figured out, now, but you’ll need to trudge all the way through that level again from scratch to give it another shot. It’s game-length padding that we were comfortable with back in the day, but any potential new players who were introduced beyond that generation may not be willing to forgive it.

[singlepic id=15186 w=320 h=240 float=left]If the difficulty proves too much, there’s always the Easy setting, which removes the life limitation and doubles your health. As it’s nearly impossible to fail on this setting, it makes one wish that there was a happy medium somewhere. But even on the higher difficulty settings, the game is quite short, and can typically be completed in a single session. However, through these aspects, the game remains admirably true to the source material.

In the wake of a barrage of retro game remakes, DuckTales: Remastered takes a stand, skillfully improving the presentation while stubbornly trusting all aspects of the original gameplay, perhaps to a fault. This doesn’t play like a new game – nor should it – so it may be difficult to convince the younger generation of players. But that isn’t the target demographic, either. This game is fan service, plain and simple. And in that role, it succeeds with flying colors. Through its old-school gameplay, snappy soundtrack, authentic dialogue, and unlockable art, DuckTales: Remastered is a faithful tribute, and a remaster done right.