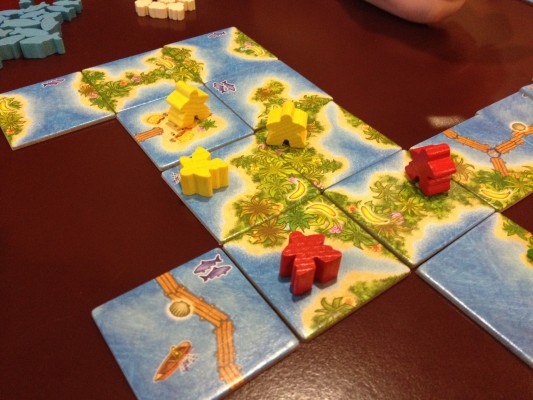 If you live in the midwest or northeastern US, then you know it’s been cold. Even the polar ice caps have been growing. It makes you want to go someplace warm, or at least warmer. Thoughts of the Caribbean might run through your mind. That’s why Carcassonne South Seas is a great diversion during the middle of winter imagining rainforests, islands, and fishing boats all around.

The sea tiles are similar to the Carcassonne tiles that include castles, roads, and cloisters. However, these have been replaced by landmarks like islands, bridges, and markets. The meeples look like they are wearing capris, as they have extra bumps coming out of their legs. The wooden wares and ship tiles are new to Carcassone, and they’ll prove to be important to the game.

South Seas follows most of the rules of typical Carcassone. You take a tile, lay it down in a spot where one of the edges matches the feature along one of the already placed tiles, and place a worker (or “Islander”) on that tile if you want. However, you don’t score after the tile is laid if a landmark is completed. Instead you gain wares. Bridges give you shells, islands give you bananas, and sea regions provide fish. The different landmarks show how many of each ware you can earn. You use these to gain the fishing boat tokens.

The ship tokens contain objectives for you to complete. You may need specific wares to complete an objective, while other times you might have to have two different groups of wares of your choice, and others let you use any wares you want to. Each ship token is worth a specific number of points, and four are laid out at the beginning of the game. When one ship token is taken, it is replaced immediately with another one. The only time when one of these can be taken without giving wares happens when a market is completed. Then the ship tile worth the most points is taken.

South Seas contains a couple of other slight rules changes. Sea regions take the place of farmers on land, but they are scored either when the sea region is completely enclosed, or a tile with a fishing boat on it is laid in the sea region. After the sea region is scored a fishing boat tile from the supply is laid on one of the fish markers. This makes it possible to gain fish multiple times in the same sea region, and lets you use your islander again instead of having to leave it on the board until the end of the game like a farmer in the original Carcassonne. This is important since you are only given four islanders to place on the tiles. However, if you don’t have any islanders in your pool, you are allowed to remove one of your islanders from the board to be used on a later turn.

What makes South Seas interesting are the wares and the ship tokens. In regular Carcassonne, when you complete an object you get points and your meeple back. Also, if there is no chance for you to complete a specific structure, that meeple just had to sit out there, and farmers stayed where they were laid until the end of the game. South Seas forces you to create multiple kinds of structures to get the wares you need to score. Also, it’s not just about who has the most wares, but the right kind of wares. Claiming the ship tokens introduces more strategy to the game, making you wonder if you can hold out to get the boat worth more points, or if you should just trade in your wares now and get the lower-point ship. It may also make it more difficult to decide where to put your meeple down depending on which wares you want to get. However, the ware tokens makes the game more fiddly as they can exchange hands often.

The components are bright and colorful, as you would expect from a game trying to recreate a tropical paradise all around it. Punching out the tiles is easy enough, but I did have one tile that almost had some of the back removed from it. The tiles feel the same size as the original Carcassonne tiles, but they have a different back so you won’t confuse which version they are from. You also can’t use this as an expansion to the original Carcassonne, which would have been a great feature if it worked out.

The wares pieces all match their corresponding resources well. There are two sizes for each, with the smaller representing one resource and the larger one representing three. The size of the two is hard to determine if you don’t have them side by side. I wish there was a bit more difference between the two sizes or some other feature to differentiate them a bit more. Also, the wares do make the game a bit more fiddly because you have to take them when completing a structure or give them back for a ship token.

I enjoy the original Carcassone, partially because it is one of the few games my wife will play with me. However, it doesn’t get taken out much because it has become a bit stale. Playing South Seas has not only given us a fresh new take on Carcassone, but has also made us go back and try some of the expansions we have that we haven’t played before. If you have grown tired of the original Carcassonne, then I would check out South Seas. It definitely has more strategy than regular Carcassonne, but I would suggest going to the original if you are teaching someone how to play.