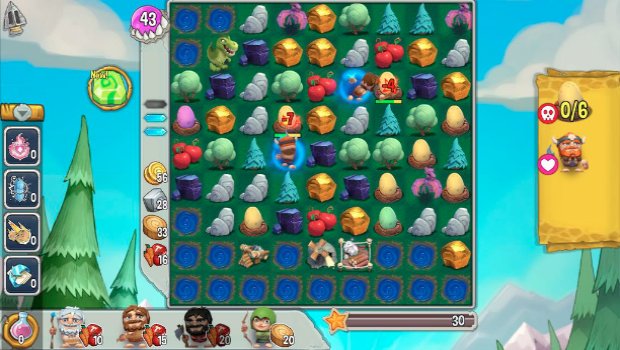 Cavemania is likely to be one of the most infuriatingly addictive games you’ll play this year. The adorable art style, playful humor, and simplistic match-three mechanics make the game as easy to pick up as it is to look at, but a lack of foresight will stop you just when you think you can complete the next puzzle.

Like Angry Birds, Cavemania is a score-based puzzle game tasking you with completing objectives in an allotted amount of turns. It varies based on level, but you’ll be matching food, stone, gold, and lumber icons to boost your score and collect the assigned goods. This isn’t just for arbitrarily collecting, but for building units, constructing complimentary buildings, and given enough skill, manipulating the playing grid.

You can’t set up major multipliers

[singlepic id=16548 w=320 h=240 float=left]Upon matching icons on the ever-changing grid, new icons fall down like the bricks in Tetris, albeit randomly. This gives a distinct advantage to matching icons at the bottom of your screen and varying which side you’ll be doing it on since you’re only allowed one move per turn. Icons can only be removed from the screen if they’re swapped into a position where they’re at least part of three similar icons in a row, either vertically or horizontally. You can’t set up a major multiplier which can be frustrating as once the tutorial is over you’re likely to feel like your back is up against the wall several times. Moving your characters also absorbs a turn, but without the audio cue that matching icons provides, you end up feeling a little cheated when you try to reposition your units.

There are perks to just biting the bullet and cashing in a quick three-icon match. Scoring matches allows characters on the screen to partake in attack actions, a necessary feature when sabre-tooth tigers are moving towards your camp or when pterodactyls are flying overhead. This adds a few layers of strategy, as moving your troops can rearrange the grid allowing you to complete objectives on top of preventing the loss of something like a granary. Completing a match of four or more icons allows your character to unleash a devastating attack on foes, allowing you to rearrange the grid even faster. A quick turnaround, though, doesn’t necessarily guarantee completing the level.

The free-to-play model is the hardest pill to swallow about the game. It’s never overtly challenging, but sometimes it feels like there’s no way for you to win in the allotted time, and for a mere dollar you can buy five more turns to clear a level. Knowing the awesome bonuses (like multipliers for food, lumber, stone, the ability to change icons, etc.) are there for purchase cheapens the game a little bit in the sense that you’re wondering if it’s as fair as it could possibly be. Of course, sometimes it falls on user-error, but knowing there’s a power-up you can purchase puts the idea in your head and that’s all it takes to make you examine it as a business model rather than a form of entertainment.

[singlepic id=16549 w=320 h=240 float=right]One level had you making matches on specifically patterned tiles in order to clear them. After the fifth time failing it in a row, I felt adequately prepared to take on the challenge, but I couldn’t. You only have so many lives and while they regenerate over time (a half hour will re-generate one life) it was like Cavemania didn’t want me to play it anymore, and to a point I didn’t. I saw behind the curtain and I didn’t like who was staring back at me.

The standout portion of the game has to be the soundtrack. The music is gorgeous, reminiscent of old 32-bit game menus like Crash Bandicoot and Spyro the Dragon. The sounds of icons lining up is satisfying and attacks carry a fun weight to them coupled with childish humor. It never feels like a series of sound bytes clumped together, it sounds like a cohesive experience that’s even enjoyable to listen to on its own merit.

A better distraction than full-blown game

Cavemania is a gorgeous, fun, and addictive game that should probably be on your phone, but doesn’t quite hit the high mark in terms of free-to-play iOS games quite the way Real Racing 3 or Pixel People has. The humor is there, the gameplay is fun when it works in your favor, but the very nature of it being free-to-play makes you wonder how far you can get before the developer tries to ask for real money in exchange for the experience. The questionable balance makes it more of a solid distraction while killing time rather than a must-play game worth downloading.