I don’t know if anyone can drive around a Metropolitan area without thinking at some point: “I could plan this city better…” Maybe it is just my engineering background, but this always comes up. Especially when driving. Urbania puts players in charge of upgrading a city from the run down shadow of its past to the shiny vision of the future. There will be lots of construction going on, but is it fun?

In Urbania players are competing with each other to make the most meaningful impact on their beloved city by upgrading buildings, completing contracts and influencing city officials. With a thick eurogame feel the main mechanic is set collection, area control (but not really) and influence.

Players are competing for victory points (surprising right?). However, there is a plethora of ways to get points in the game; some ways are visible by all players, and some using hidden info. The game is played out on a seven by seven grid of the city containing all of the different buildings to be upgraded. In addition, there is a building renovation count track that is shared by the personality influence track.

Each player’s turn is made up of two actions. The choice of actions can be any of the following: picking up cards, upgrading a building, buying influence or playing a plan. Any of these actions can be taken twice in a turn. Picking up more cards feels a lot like Ticket to Ride, where players pick up two cards, from either a face down deck or from 5 face up cards. These cards are then used in the following actions. Any card with hard hat icons are used to buy buildings, flipping them to their upgraded side. Money is used to buy influence, collecting the expert card for the player. And plans are played face down and form a secret scoring goal for the player.

The game ends under two different conditions: either a certain number of buildings have been build in one district, or three personalities rise above a certain level on the influence track. Once this happens, each player gets one more turn and then player’s ‘plans’ are scored. Players will get points related to how valuable a specialist is, or how many buildings have been upgraded in a given area. Once all of these points have been added, whoever has the most points is declared the winner.

The rules of Urbania straightforward and easy to pick up, taking only five minutes to teach. Players can easily figure it out as they play. The only issue is in scoring the plans, as they are a little confusing yet make up a big part of the scoring in the game. The component quality is fine. In a handful of plays, there is no obvious wear on the tiles or the cards. The game plays remarkably well for all player counts. Playing with 4 or 5 does get a little bogged down if players are not paying attention.

My biggest production complaint is the color scheme they chose to use. The game is easy on the eyes. It is full of dark and moody colors, playing to the dirty-ness of the broken down city. As you upgrade the buildings, there is a visible brightening of the upgraded areas. There is a complete lack of harsh, standard, primary colors. This may sound great from an artistic standpoint, but it almost makes the game unplayable. Just about every aspect of the game relies on being able to match associated things. For example: being able to tell if the specialist you have matches a building you want to upgrade, or identifying the current build count of a building you are considering upgrading. Some of the colors are so close to each other, that it makes it nearly impossible to play without double checking every time you look between two things. The biggest issue is the brown, tan and silver colors as they all look the same. Things look fine when they are all laid out on the table, but as soon as the game starts, it becomes a bear. An easy upgrade would be to print the icons on the cubes and disks; this could even be done with a sharpie.

When first reading through the rules I started to get an itch in the back of my mind that Urbania feels a lot like another game I know: players collect color coded sets of cards from a row of face up cards, players have secret end-game goals, players play varying sets of colors to complete different things… sounds a lot like Ticket to Ride, right? While it may be hard to translate this feeling over text, when you are playing you cannot help but compare the two. The good thing is that Urbania has another layer woven in to it. There is more going on here than just completing routes. The addition of the specialists adds another level of complexity that fits really well. Honestly, I would rather play Urbania than Ticket to Ride. Don’t get me wrong, Ticket to Ride is a great game, but Urbania is more interesting.

I have already griped about the color choices used, but this leads to another irritation. The different buildings and specialists are exactly the same. There is no variation. Every single color has the exact same set up. They have same number of buildings, the same point distribution and build cost of said buildings, the same specialist values and, to top it off, the build cards are all the same distribution. This lack of variation does not help mask the abstraction of the game, it almost encourages wiping off the theme to play effectively.

The theme of Urbania is thinly laid over the game. At most players will be coming up with names for the different specialists. Most of the time buildings and specialists are referred to as ‘that red one,’ or ‘I want the pink one’. This does not particularly bother me, but those who are looking for a thematic game should move on.

The game can end abruptly, and without very much grace. In most games the end will be triggered by a upgrade limit being reached in an area of the board. These conditions are hard to keep track of and see right away, so it is hard to gauge the end turn. In more than one game, someone triggered the end of the game prematurely, and ended up hurting themselves. 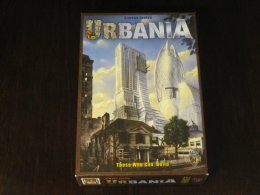 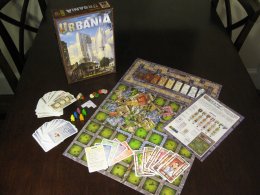 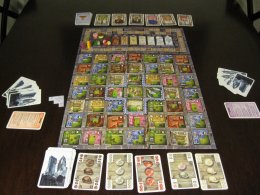 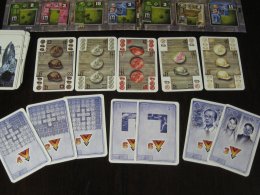 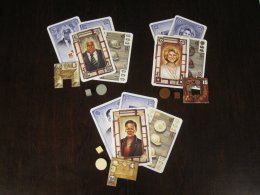 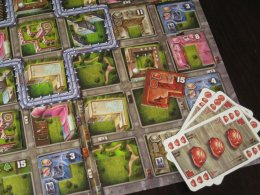 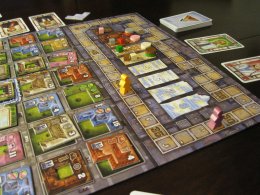 A refreshing aspect of Urbania is the lack of ownership. When you upgrade a building you get the points, but that is it. After you have nothing to do with that building. I can fill up both of my hands counting games where you ‘claim’ or mark the things you build/produce/complete. This folds in well with the end game plan cards. Other people can build the buildings you need or upgrade in the space you need to complete. This uncertainty of helping your opponents complete their plans adds a healthy dose of competition.

Every single turn, players are going to want to perform more than two actions. This seems cliche, but Urbania strikes a beautifully tense balance. The actions are all necessary and they are all rewarding. This leads to a hard, yet satisfying, choice to be made. Unlike some games, you never really feel beat down, or cheated out of a play. Often people will upgrade a building you wanted to, but there are so many buildings to upgrade, that another one will be just as helpful.

I was pleasantly surprised after playing Urbania a few times. I was not expecting much, but Mayfair packs a lot of game in the box. With straightforward rules and rewarding, hard choices, I enjoyed every play. For people looking for a strong, solid Euro game, Urbania is one that should be considered.