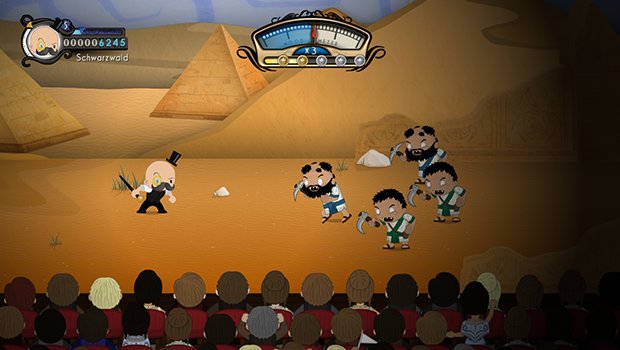 Foul Play is charming. Let’s get that one out there immediately: it’s a cute little side-scrolling beat-’em-up situated squarely in the vein of old-school classics like Golden Axe or Final Fight, casting you in the role of daemon hunter Baron Dashforth as he goes on the adventure of a lifetime. Or rather, you play as a character who is playing the role of Baron Dashforth for a live audience – one that reacts to your on-stage performance, rewarding you for stringing together longer and longer combos, and booing you for doing a bad job of fighting your supporting cast. For $14.99 retail on Steam, you get 22 acts, over 50 enemies, 12 fighting moves and an entertaining story, an experience you can share in co-op play with a friend, both online and off. It’s a fun game, it has an entertaining story, and it’s at exactly the right price to justify picking this one up out of the gates – at least if beating the crap out of dozens and dozens of method actors sounds entertaining. And if it doesn’t, then you and I have remarkably different definitions of fun.

The story in a story of Foul Play features turn of the (19th) century adventurer Baron Dashforth as he lives out his past tales of derring-do – which is in actuality all part of a 22-act play being performed in front of a live audience. The Baron himself is a charming character, looking a little like a Charlie Brown who grew up to be a bit more dashing, complete with monocle, top hat and impressive moustache. Just like any good and proper adventure, his experiences feature action from start to finish – the pugilistic, fist-swinging and in this case button-spamming sort of action. While it’s all being played out on a stage, you wouldn’t know it save for the mechanically animated scenery that shifts around around behind the Baron during his escapades – complete with ‘defeated’ enemies crawling out of the spotlight, clouds hanging from strings and background props moving courtesy of clockworks. While this sort of setting would normally run the risk of being far too self-aware and ‘meta’, Foul Play doesn’t have this problem at all – the characters get into their roles, and even some audience interaction doesn’t shake them out of character for very long.[singlepic id=16160 w=320 h=240 float=right]

That audience interaction is the central personalized ‘spin’ Foul Play gives to its gameplay. There are no weapons to pick up and beat your opponents with in course of this game, nor are there conspicious piles of food to snack on to restore your health. Instead, everything revolves around how the audience happens to be reacting to your on-stage performance – and just like the famous Frye versus Takayama fight, it turns out that what audiences like the most is a rapid succession of punches delivered over and over again with little interruption. Combos, in other words. As you perform longer and longer strings of punches, kicks and more, the audience’s reaction meter gets higher and higher – which results not only in an increasingly enthusiastic crowd, but also raises your multiplier and serves as a stand-in for a health bar. Do poorly enough and you’ll find yourself being booed right off the stage. Do well, and you’ll not only have the crowd cheering you on – you’ll also effectively have more ‘health’, for those cases where the enemies actually manage to land a blow on you. The controls are simple, and while the game formally recommends a controller for play, the key bindings are customizable – and I personally had no problem racking together a nice string of combos straight out of the gates.

During the course of the game you’ll unlock up to twelve “stage-tricks” – fighting moves, basically, which will allow you to either deal more damage to your fellow thespians, or spontaneously increase the audience’s mood when you need it most. The 22 acts of the play cash out to 22 ‘levels’ to play your way through, and each of these in turn has a 1 to 5 star rating you can earn depending not only on the skill of your combo-chaining, but also on your satisfying up to three per-stage bonuses. One of these bonuses may require you to take out the ‘leader’ of a given group of ne’er-do-wells last, while another may task you with pulling off a 50-move combo at some point in a particular scene. While you can get through a level ignoring these side challenges, they add some challenge and entertainment to Foul Play – and completing enough of them results in unlocking equipment you can wear to enhance your power during regular gameplay, such as increasing the amount of combo points you accrue in the middle of a chain. While simply having challenges to pursue is nice from a ‘completionist’ standpoint, being rewarded with a more powerful character is a particularly nice touch. Pages in the ‘Daemon Diary’ are also unlocked as acts are completed, giving some additional background to Baron Dashforth’s stories.[singlepic id=16155 w=320 h=240 float=left]

Of course, one of the real benefits of the old-school beat-em-up genre was the ability to play alongside a friend – and Foul Play’s developers are clearly aware of this. Co-op play is available in both online and offline modes, allowing a second player to take on the role of the Baron’s ever-present and trusted sidekick Scampwick – letting you bring a friend along for the ride. While I focused more on the single-player side of things, Foul Play is easily the sort of game I could see playing with a friend, especially during an initial play through – or maybe to get some assistance in clearing out the more troublesome and challenging achievements and side missions down the road. Of course, it’s also just worth playing with a friend for the experience – this is a charming game filled with cutely animated backgrounds, well-delivered lines of wit, and a generally laid back attitude that’s refreshing to take part in. The downside is that, seeing as it’s an indie title, players who want to engage in some co-op will probably be better off actually bugging a friend to pick up a copy, rather than simply trying their luck with whoever happens to be online at the moment.

While a little bit simple in terms of art, Foul Play is a polished little Final Fight style title that was really a blast to play. It has that whole 19th century British Gentleman and Adventurer aspect going on nicely, there’s a good amount of initial-run gameplay content spread out over 22 acts, and the variety of unlockables and side-missions adds some life to the title. Tie it all up in a bow and slap a $14.99 price tag on it, and you have a game worth adding to the library of any beat-em-up fan – and at an ideal price-point too. This one’s due out September 18th in the Steam Store, and is available at 10% off ($13.49) for anyone who preorders it – so if beating up a slew of dedicated actors dressed like bandits, mummies and more sounds like your idea of a good time, be sure to check Foul Play out. Tally Ho!