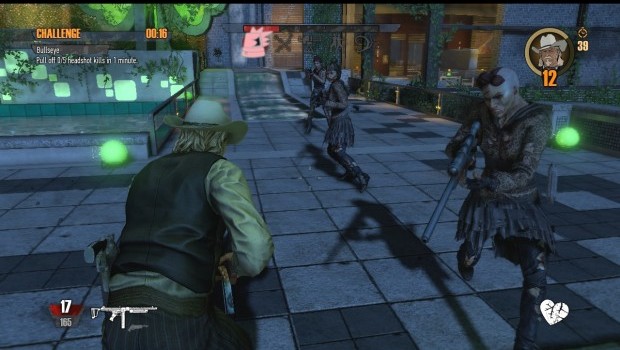 At one time you were guaranteed a terrible game if it had some kind of license, but that has changed in recent years.  For instance, the Batman games are great examples of creating a great game that includes all the components that make the character compelling.  When I got the request to review R.I.P.D.: The Game, I figured it might be a fun distraction.  The movie looks like dumb fun, so this could be a nice little diversion.  Then I started playing.

The story behind R.I.P.D.: The Game is the same as the movie and the comic book.  Nick Walker is a cop that was never afraid of a firefight.  Too bad he died in one.  As his soul was being pulled into the great beyond, his soul got pulled into the office of Proctor, and he was offered a position in the Rest In Peace Department.  Now he is paired with old cowboy Roy Pulsipher to chase Deados, rhymes with Five-o or Dan-o.  These lost souls want to hang around Earth and are now working together to gather gold.  You must send the Deados to the afterlife where they belong.

[singlepic id=14449 w=320 h=240 float=left]In R.I.P.D., you play as either Roy or Nick.  When you start a match, you are given your options for a primary and secondary weapon, and you jump into one of seven maps.  If you do a Quick Match, you only select your weapons and difficulty.  If you do a Custom Match, you can select which map and character model you want to use as well.  Beware, if you set up a Custom Match without someone else, you are on your own.

Before you jump into the game, there is a friendly vote set up before the two of you play.  Five options are given, such as staying alive the longest or getting the most head shots.  Each player eliminates one and the last one is the active challenge.  It gives some kind of gold multiplier if you win, but unless you are ultra competitive you won’t care about this.  The gold is used to purchase new weapons and upgrade them.

Once you get into the level, it is basically a cheap version of Horde mode where you fight waves of enemy Deados.  You have a few regular Deados, a couple Deados that can heal other ones, and the big one with a large melee weapon.  With seven Deado character models total, you are constantly seeing the same characters again.  While I understand that this is a budget title, a little more variety would make the game feel a little fresher.  The AI on the Deados is brain dead.  They mostly attack you head on and defeat you with numbers.

When I mention the lack of variety, I can’t help but mention the number of maps.  With seven maps total, you can get through each of them very quickly.  Since you only have two characters at any time, the maps are all roughly the same size.  While they are multi-tiered, you are always blocked in that tier by the level design.  There’s no way to jump over an obstacle in front of you to the lower level, which makes movement limiting.

[singlepic id=14444 w=320 h=240 float=right]The clunky controls don’t help the game at all.  Trying to aim any kind of shot is difficult, as movement is not smooth.  Trying to evade enemies requires anticipation as it takes a couple of seconds for it to execute.  The framerate gets killed when multiple enemies are on the screen, but even firing at a single enemy can cause it to drop.  Switching your weapons and reloading takes a long time as well

The movie features Jeff Bridges and Ryan Renolds, and they have apparently lent their voices to the game.  However, I couldn’t tell you what they said in the game because they weren’t loud enough for me to understand a single word they said.  They also don’t talk much during the game, mostly at the beginning of the level and maybe when a new challenge is announced.  About the only sounds you’ll hear are the weapons’ fire.  These will disappear as you take damage and the screen turns black and white.

[singlepic id=14499 w=320 h=240 float=left]I thought from the previews of the R.I.P.D.  movie that you’d be practically indestructible, which made me wonder how the developers would make the game a challenge and still fit the theme.  Well, apparently Deado weapons have ammunition that can damage you.  Once your health is depleted, either your partner has to save you or you commit suicide and come back to life.  However, you lose a life.  You are also given a specific amount of time for each level.  If you don’t complete the wave within a specific time, you lose a life.  Once you run out of time and life, you can no longer respawn.  I always felt that the damage I was taking was sudden, with the screen turning black and white without warning.  No occurrences of gradual took place from my experience.  Once you saw a black and white screen you really have to find cover quickly or else you’ll be dead very quickly as well.  Regenerating your health was slow as well, so finding good cover is necessary.  The size of the maps and the fact that there are only two of you makes finding a hiding spot difficult.

I have reviewed some bad games, but this is even bad even for movie tie-in games.  This is bad on the level of Aquaman bad.  If someone created the R.I.P.D. Awards for the year’s worst games, I wouldn’t be surprised.  It is probably the worst game I’ve reviewed since Bomberman Act: Zero.  With bad graphics, lack of characters and maps, and terrible sound quality, I’d only recommend downloading this if you are a masochist wanting to collect the worst games ever made for a museum to warn future generations of how bad games can be.