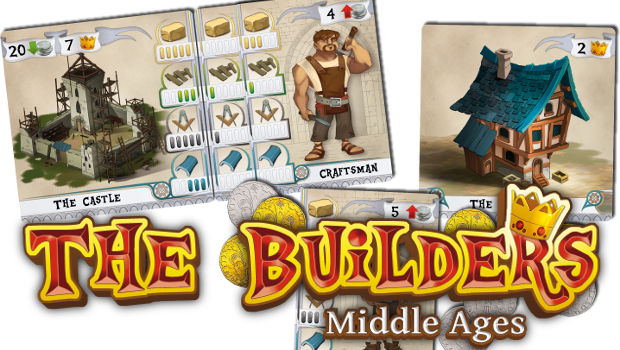 A Kickstarter campaign recently ended successfully for a game that consists of one card. And thus we have reached the lower limit of the microgame.

The hottest trend in the last 18 months has been toward board and card games that cost little, have few components, and can be played in 40 minutes or less. The king of these has been AEG’s Love Letter, which consists of 16 cards and retails for $9.99.

Part of this trend is certainly a counter to the run-up in prices on other kinds of games. A hobbyist board game with an MSRP of $75 or more is no longer uncommon. Even a few card games are pushing into that price territory. Add in play lengths of two hours or more and some people may balk.

Hip to the trend toward tinier games, French game publisher Bombyx released Les Bâtisseurs: Moyen-Âge in their home country, and it was a smash hit, burning through its print run almost overnight. Oddly, it’s a form of worker placement game, usually a type of gaming mechanic reserved for large, expensive board games. Designer Frédéric Henry teamed with artist Sabrina Miramon to make a small (though not quite micro)  card-based game that asks players to efficiently manage money and craftsmen to build a series of buildings and the machines that help construct them. Big French game distributor Asmodee brings the English language version The Builders: Middle Ages to the U.S.

The embossed plastic coins are a REALLY nice touch. In fact, everyone who played the game noted them. Such a simple component, yet they added quality to the game. A much better choice than cardboard or paper money.

The cards come in two sizes: workers are 2½” x 3½” playing card size, but the buildings and machines are 3½” squares. These larger cards give the game more heft.

The artwork features cartoonish but still semi-realistic depictions of the several types of workers, builders, and machines. The cards feature no consistent back on the reverse but are double-sided, with the building and machine cards depicting incomplete and completed constructions and the worker cards showing the worker on both sides.

The card stock is linen-finished, a nice touch. However, a few of the worker cards in my copy of the game were stuck together, and there is a tendency for the cards to “potato chip,” which means they will spin on a smooth surface. That spinning is not a breaker in most games, but because of how cards must be manipulated in this one, it was annoying. So was having the surface of a few of the worker cards damaged when attempting to pry them apart. I guess the consolation is their being the same on both sides. Oh well.

The rules of this 2-4-player game could not be simpler.

Each player is given three action points per turn (though more can be purchased). A player can divvy up points as desired, spending all, some, or none on any one type of action. Four types of actions are possible:

Send a worker to work

Four types of worker cards exist and have differing coin costs to put to work once recruited:

Each worker also possess skills in the following building resources:

Each worker card shows those four resources as icons and will include vertical hash marks next to each if the worker can work with that resource. The total number of hash marks distributed among the resources is equal to the worker’s cost. Apprentices can work with fewer resources and in lesser amounts than the more broadly or deeply skilled masters.

The building and machine cards also show these resources, but as a need. In addition, each building or machine card has a coin payout value when completed and a victory point value.

Machine cards, when completed, can also function like a type of worker, as they not only take resources to build, but they can offer resources once completed. And unlike workers, machines don’t have to be paid to be put into action.

Deal into the group tableau five buildings and five workers. Each player gets one gold coin (worth 5 each),  five silver coins (worth 1 each), and an apprentice worker. One player is selected as first player and retains this throughout the game.

In turn, players select buildings, machines, and workers from the tableau, with cards replaced in the tableau as taken. Players must then match sets of workers to a building or machine to meet its resource needs. When all resource needs are met by worker resource capabilities, the building is turned to the completed side and builders assigned to that building become available again.

Should a player have three different buildings ready to build, sending one worker to each building would cost three action points, one per worker. However, sending workers to work on the same building enacts a toll in higher action points, as one worker is one action, two is three, and three is six. Players get just three “free” action points per turn, but if a player wants more, she can spend 5 in coins per additional action point.

The game enters the final round when one player reaches 17 points in completed buildings or machines. If the other players have not completed their final turn, they do so. Each 10 coins scores an additional point. Most points wins.

Explaining the game takes less than five minutes. The breadth of actions is small and easy to manage. It’s hard to mess up play.

French games today often feature oustanding artwork and graphic design. The embossed tin for The Builders: Middle Ages and the game itself look great, and again, those plastic coins are an unexpected (and positive) surprise.

The consensus among the folks who played The Builders: Middle Ages was a pronounced and unanimous “meh.”

Games have come a long way in the last 20 years, and this one does not keep pace with what’s happening in the industry now. If it had come out in 1994, it may have gotten good buzz in the U.S. market. But inexpensive, simple games today possess a depth they didn’t even five years ago. Love Letter took 16 cards and became a bestseller because it blended good player interaction, simplicity, quality components, and a rock-bottom price with surprising depth of play. The stakes are so much higher than they once were, every game today has to hit multiple sweet spots and almost never miss if it wants to “play with the big boys.”

Obvious lacks in this game::

Player interaction. Each person is locked into their “work,” and with the exception of picking from the same pool of cards, might as well be playing solitaire. Oddly enough, given this solitaire-like feeling, the game has no solitaire mode/rules!

Means of catchup or confrontation. If a player gets ahead, no way exists to stop him. One player in my game group mentioned adding a catapult as a machine would be a fine way to smash another player’s finely crafted cloister or tavern. Sounds good. Too bad the designer didn’t offer it—or any other means to slow down opponents.

Straightforward play. For how simple the rules are, the play is too fiddly. Making sense of the myriad possibilities for combos based on the workers and buildings in the tableau is a chore. Because anticipating future buildings isn’t possible, planning for future workers is next to impossible. Players said they just grabbed for whichever workers seemed best on first glance, since it was hard to scan everything in the tableau and calculate combos on the fly, especially with everyone staring at you while you take your turn. Management and optimization are common game elements, but they feel like work here. Chartered accountants may love The Builders: Middle Ages, but “normal” people won’t.

Strategy. The optimum choices from available options in hand may be obvious, which leads to the game playing the players rather than the other way around.

Fun. There isn’t much.

Lastly, I have no clue why the theme was the Middle Ages. If the game is intended as a series, it started in the least interesting period imaginable, which seems like doom from the start. A contemporary setting would have allowed much more flexibility in buildings and machines, plus given us female workers. Socially progressive Europeans designed this game? Really?

Asmodee rarely misses on games it picks up for distribution, but The Builders: Middle Ages proves the company isn’t perfect. This game feels like a relic from an earlier age. It’s both underdeveloped and overly fiddly, which is the veritable double-whammy for a game published in 2014.

Publisher:Bombyx (distributed in the U.S. by Asmodee)

An attractive-looking game with good components, but the stakes for small, inexpensive games are higher now than ever before. The Builders: Middle Ages needs better player interaction, more ways to confront opponents, and more fun packed into its compact tin for it to compete against the new breed of smaller games.