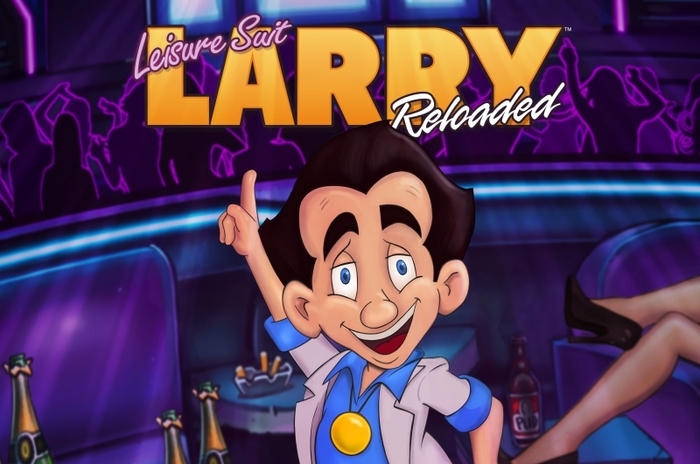 Decoder wheels, “special” red colored plastic films and oddly printed manuals, grids for fuel calculations, serial numbers, always-on, and more have been used for copy protection, but nobody had used historical trivia as a method of keeping their games out of the hands of people too young to be playing them.  Well, the folks at Sierra did exactly that in the year 1987.  It worked very well because it asked questions like “What can you get in the red light district?” with the correct answer being “In many cases, trouble”.  As I loaded up Leisure Suit Larry Reloaded and found myself stuck in a puzzle game for the first time in a long time, I knew that this game might also be, in many cases, in trouble.

Al Lowe is best known as the father of Leisure Suit Larry, but you might not know that he also worked on the King’s Quest, Police Quest, and Space Quest titles.  Over his career he tackled 26 titles, almost all of which aligned under a single quest – to make us laugh.  Never above slapstick, rude, situational, and often self-deprecating, Lowe’s humor provided the laugh track to my youth (and despite his copy protection, probably a little younger than he intended), but in the mid to late 90s, Larry just disappeared.  Sierra was struggling, Leisure Suit Larry 7: Love for Sail didn’t set the world on fire, and we lost track of our white-suited interminable bachelor for quite some time.  The team at Replay games didn’t think that was right – they wanted to bring Mr. Laffer back to life.

[singlepic id=14419 w=320 h=240 float=left]Through the power of Kickstarter and over 17,000 fans, the team at Replay wanted to rebuild Leisure Suit Larry in the Land of the Lounge Lizards and release it to an unsuspecting new generation.  Taking a game that was 8-bit, chiptunes, and more imagination, intention, and innuendo than anything explicit and updating it for the modern world would require a complete retooling of literally every aspect of the product.  With series co-captains Al Lowe and Josh Mandel (he tackled Space Quest 6 and the equally-funny Freddy Pharkas: Frontier Pharmacist) at the helm, the team did exactly that.  Completely hand-animating the entire game, converting every line of text to fully-voiced interactions, and providing an all new score, they did something impossible – they welcomed the stuck-in-the-70s lounge lizard into 2013.

The Emperor’s New Clothes
If I told you that, on the best computer at the time, Leisure Suit Larry in the Land of the Lounge Lizards used EGA graphics (that’s 640×350 resolution, kids!) and sported an incredible 64 colors, most of you would have absolutely no frame of reference.  Hell, most of you don’t have a clue that there is a such thing as VGA, much less Super VGA.  Let’s just say it looked like Minecraft, but so much worse.  The team at Replay had to bring every scene to life at 1920×1080 resolution, building Larry’s animations with more detail than any title before.  To that end, they’ve succeeded pretty well.

I’m very reminded of the animated cartoons of the 80s and 90s with Leisure Suit Larry Reloaded.  What I mean by that is there was always a way to see the thing that was about to animate as it somewhat stuck out from everything else.  It was either more lightly shaded, or lacked the detail and depth of the things nearby.  With LSLR we see that in reverse – the backgrounds are extremely detailed, but the animated people in the foreground are somewhat lacking.  Larry looks straight out of Love for Sail, and that game was made in 1996.  In the end, it is a colossal upgrade from the original, but it is clear that it was built to land on platforms both reasonable and mobile.  If you are wondering if this can run on your machine, I don’t need any details – the answer is yes.[singlepic id=14413 w=320 h=240 float=right]

Welcome to Lefty’s!  Welcome back to Leftys!  And again….
Leisure Suit Larry In the Land of the Lounge Lizards was one of many in the heyday of Sierra OnLine, bringing the point-and-click genre to life.  While the games powered by the SCUMM engine went with a “Use X with Y” style menu at the bottom of the screen, the Leisure Suit titles left the screen wide open, asking the player to pixel-hunt, click on everything, and then decipher how to use the items in Larry’s suitcase in some obtuse ways using a MSPaint-looking menu that pops up on the top of the screen.  The modern remake retains the same thought, pushing the menu onto the scroll wheel and leaving you just as much in the dark.  Similarly, all of these puzzles are intact, though the team has thrown in a few additional modern bits of fun like an Angry Birds style minigame to round things out.  It is very clear that Replay wanted to make a faithful recreation of the original, and they have…but they should have solved some of the mechanics while they were at it.

[singlepic id=14418 w=320 h=240 float=left]As I look at this game I realize that it likely shaped my OCD that presents itself in many other games.  Put simply, I click on everything and load it into my backpack for a rainy day.  In Skyrim, the first mod I use is to remove the weight restrictions in the game so I can packrat more.  In Reloaded, this leaves you with a great deal of miscellaneous off-context objects that you’ll later combine to dig Larry out of whatever self-inflicted misfortune the hapless hero has put his foot in.  If you look at most games nowadays, you’ll see exactly why this might be an issue for some.  Quests are guided by arrows on your HUD, sparkles on the ground, or circles on your map.  Puzzles are spoonfed to the player, and the solutions often boil down to shoving a block or finding a key.  The puzzles in LSLR are a little less straightforward, require a little bit of thought, and are the kind that make you say “Oh I should have seen that….” when you stumble on the solutions.  Unlike when the original was released, you can simply use the Internet if you get overly stuck.

The game opens with Larry in front of Lefty’s – a mellow bar with a slot machine, a filthy bathroom, and an oversized moose on the wall.  The patrons enjoy their drinks bellied up to the bar, leaving Larry to his own devices.  With only a small wad of cash in his pockets, the only recourse is to blow it all on the slot machine, right?  Well, driving yourself down to your last dollar can literally ruin your ability to move forward.  This means, if you are unlucky (and you will be), you’ll end up abusing the save and load functions of the game just to get ahead.  This isn’t a gameplay mechanic – it’s cheating.  The real problem is that, if you’ve not played the original and happen to have a 25-year memory, you might not realize you are stuck, leading you to either wander for an hour or look up the solution on the Internet.  That’s the sort of frustration that leads people to abandon ship.  When the game takes every damned dime out of your pocket half way through, it just makes you gnash your teeth.  At least you’ll have access to Blackjack at this point – something with a little more strategy than slot machines.

Captain Thygh: (about the Narrator) “Who’s that?” Larry: “I dunno, but I keep hearing him all the time”
Speaking of ships, veteran Larry actor Jan Rabson returns to the game to provide the voice of the titular (ha!  dirty Al Lowe-esque pun!) character.  As it was in Love for Sail, the entire game is voice acted, with Brad Venable tackling the heavy lifting as the narrator.  While you’d imagine that Larry gets most of the lines, it’s actually our voiceover friend that you’ll hear most.  The reason being, every time you click on something that would have been described in text in the original, it’s instead read aloud by the narrator.  Additionally, every time you click on something that can’t be used, it’ll also be read aloud.  By the time you get through the 5-6 hours of the game, you’ll have heard more than enough of poor Brad.[singlepic id=14410 w=320 h=240 float=left]

If you don’t have a frame of reference for Larry Laffer, you might assume that this game would be very rated M.  Funny enough, you may or may not be right.  With Al Lowe, his writing style was more comedy than crass.  This means that, while Larry gets himself into some situations where he just might get lucky, there is no real nudity to speak of.  What it does have, in spaces, is plenty of crude humor.  Every single thing you click on seems to lead to Larry or the Narrator making some sort of predictable blue joke.  While there are some laughs to be had here, most of it is the “Oh, that’s just wrong” kind of half-laugh.  Double entendres are the stock-and-trade of Reloaded.  While the game isn’t outright raunchy, I still wouldn’t play it in front of the little ones, no matter how early I got my hands on the original.

Larry Laffer: Whatever happened to good old pointing and clicking?
It’s been a long time since we climbed into the white wing-tipped Leisure Suit of Larry Laffer.  Through the power of Kickstarter, the world said “Yes!  Bring back the consummate bachelor!” and Replay made it so.  Every dick and fart joke, every sexual rejection, every innuendo was brought to the table for Reloaded, along with some very dated mechanics.  In the end, however, the price of admission is a pretty cheap trip down memory lane.  For less than $20 bucks you can relive a bit of naughty fun.  I just wonder if it’ll catch on with a new audience, or if Larry will live on in the mind of those of us who snuck onto our parents IBM-compatible machines and guessed our way through a bit of historical trivia.