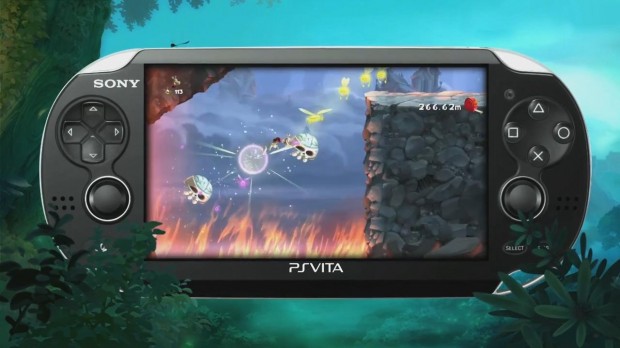 Rayman Legends is one of the best platforming experiences in years. From its charming presentation to its fluid controls, this game will have you entertained for hours on end and keep you coming back for more. And while the title is available on numerous platforms (and excellent on all of them), PlayStation Vita owners will be happy to learn that their version of Rayman Legends is second only to the near-perfect Wii U release.

Once again, Rayman Legends brings us back to the Glade of Dreams to defend against the invading nightmares. Through five different worlds filled with diverse levels, Rayman and friends charge forward to cleanse the land of the intruders. The whole scenario is a wonderful excuse to paint the canvas with this intoxicating landscape, but no additional narrative is necessary. The rest of the game speaks for itself.

A side-scrolling platformer oozing with charisma

[singlepic id=16223 w=320 h=240 float=left]In the tradition of 2011’s Rayman Origins (an excellent game in its own right), Rayman Legends is a side-scrolling platformer oozing with charisma. The crisp, hand-drawn animations give each hero and enemy their own unique personality. The varied worlds demonstrate their cartoonish identities while remaining rich in detail. The action all takes place on a flat plane, but the environments add the depth of the third dimension to engross you in each setting. And there aren’t enough kind words to describe the audio elements of Rayman Legends. The orchestral soundtrack superbly complements every situation with the prowess of a good film score, and the hilarious sound effects are the finishing touches to complete this impeccable presentation.

In fact, you may spend so much time admiring this game that you fail to notice how great it feels to play. This is because the action in Rayman Legends is effortless. After a short time with the early levels learning the basics, you quickly begin to understand what the game wants you to do. Running, stomping, punching, floating, wall-jumping… The levels often demand that you chain these actions in quick succession while being chased by a wall of fire or climbing a sinking building. But the levels are so finely crafted that rattling off precise maneuvers feels natural. As a result, Rayman Legends can present you with some stiff challenges that manage to be difficult enough to provide exhilaration upon completion, but typically short of being truly frustrating. That said, this game seems to have the skilled player in mind. The challenge becomes formidable towards the end, putting a light damper on its level of accessibility.

This is also because the game puts fun first. There are no limited lives to worry about and, in most cases, the checkpoints you return to when dying are generously close to the location where you failed. In this way, Rayman Legends openly encourages exploration and experimentation without fear of lost progress. Furthermore, many of the most difficult sequences take place in hidden areas that are not required for progression. While your primary goal is always to rescue the many “Teensies,” collecting all of them in each level isn’t necessary, though you constantly feel the desire to find every one nonetheless. In essence, Rayman Legends allows you to decide how much – and when – you want to be challenged. In almost every case, once you feel like you’ve mastered everything the game has thrown at you, there’s another step up for you to take should you choose to accept it.

Rayman Legends holds your attention from start to finish

[singlepic id=16222 w=320 h=240 float=right]Where many platformers can eventually feel long in the tooth and overstay their welcomes, Rayman Legends manages to keep things interesting throughout. After a couple of traditional platforming levels, you may be presented with one of your flying friend Murfy’s stages, tasking you with using the touch screen to instruct the little bugger to cut ropes and drag platforms, guiding the plump Globox safely to his destination. Or maybe you’ll find yourself in one of several large-scale boss battles in all its bombastic glory. Perhaps you’ll be racing along to a wacky rendition of Eye of the Tiger in a pseudo-rhythm game. Rayman Legends holds your attention – and your admiration – from start to finish.

But I use the word “finish” loosely. There is a ton of content in this game that goes well beyond what is required to roll the credits. Collect enough Teensies and additional levels will unlock so frequently that you won’t be able to keep up. If you do well enough on a given level, you earn a “Lucky Ticket” which can award you with even more stages in the form of throwbacks to Rayman Origins. There’s even an entire world to unlock if you collect a hefty amount of Teensies, adding yet more content.

All other versions of Rayman Legends offer “Invaded” missions – very difficult, alternate versions of completed levels – but these are not present on the Vita version at launch. However, the developer has confirmed that these levels will be coming via free DLC in the future, so Vita owners need not fret. And in the meantime, the Vita version of Rayman Legends is the only one featuring “Murfy’s Challenges,” five unlockable Murfy levels to add to the already plentiful content.

Moreover, there are the daily and weekly “challenges.” New ones are provided on the appropriate basis and your successes are pitted against a leaderboard of players from around the world. Depending on how well you perform each challenge, you can be rewarded with a bronze, silver, or gold cup, but only if your standing remains upon the challenge’s completion at the end of the day or week. It’s a surprisingly effective incentive to keep you coming back to maintain or improve your standings until each challenge ends. And for bragging rights, the previous challenge winners’ names scroll across the bottom of the screen when browsing the Glade of Dreams.

[singlepic id=16221 w=320 h=240 float=left]If you have friends in tow, Rayman Legends provides drop-in, drop-out multiplayer co-op gameplay. It often makes things more difficult, but can also result in some ridiculous and hilarious moments. The multiplayer is most enjoyable when playing the Murfy levels, allowing one player to use the touch screen as Murfy and the others to navigate the platforming. Unfortunately, the co-op is not Internet-enabled, only offering play with nearby Vita players through ad-hoc networking, or using a local LAN to establish partners. Additionally, each player will need to purchase their own copy of the game to play along.

While the Wii U remains the definite version of Rayman Legends, the PlayStation Vita comes in at a very close second, and over any other platform. The Vita handles all of the touch-screen functionality that is lost on the PC, PlayStation 3, and Xbox 360. Even better, the touch interface feels smoother and more responsive than the Wii U’s tablet controller. However, the delayed Invasion missions along with the need for multiple copies of the game to play co-op – not to mention some slightly longer loading times – keep this version just barely on the heels of its Nintendo counterpart.

Whether you’re a rabid fan of platforming games or you’ve grown disillusioned with them over the years, Rayman Legends has the charm and gameplay to leave you enthralled. Nary a fault can be found while conquering its many levels and soaking in its immaculate aesthetic. Completing the core stages is a joy, but the numerous collectibles, unlockable levels, and daily challenges will have you returning to the Glade of Dreams time and time again. I’m not afraid to say it: here is the pinnacle of the platforming genre for this gaming generation.

This game was reviewed using a release copy provided by the publisher.