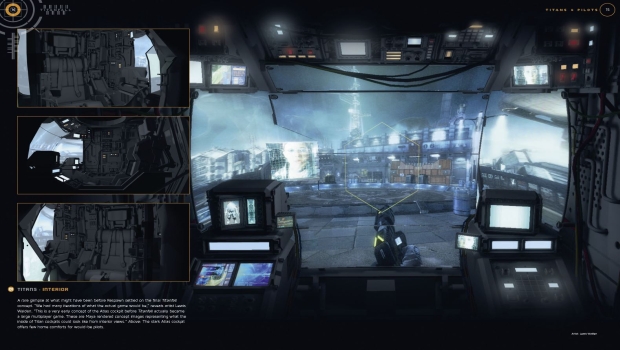 Right around the corner is easily the most anticipated Xbox One title that we know. While Microsoft and the third-party partners prep for E3, GDC, SXSW, and more, the team at Respawn and EA are prepping to kick off the next generation of gaming in earnest with their giant stompy robot title, Titanfall. In advance of the North American launch on March 11th, we have a look at the hardback art companion from Titan Books.

I’ve looked at several books from Titan in the last few years, and this one delivers with the same high caliber production values as its contemporaries. This 190-page full-color carries a forward from Joel Emsile, Lead Artist, an Introduction by Steve Fukuda, Game Director, and an Afterword by Respawn CEO, Vince Zampella. Penned by Andy McVitte (who also handled The Art of Assassin’s Creed III, and the upcoming Art of Watch Dogs titles), the book is split into four sections, Titans & Pilots, Vehicles Weapons & Tech, Locations, and Graphics and Modeling. But it’s more than that – it’s the evolution of this title from early concept art to the final concepts that have caught all of our attention.

You can check out our brush with Titanfall as I embarrass myself playing in the beta, but fans are in for a great deal of surprises. The eventually-open test gave us but a taste of what Respawn has in store for us. Even though game doesn’t feature a single player component, the team clearly put in a great deal of work on the backstory, characters, settings, and components that make up the world of Titanfall. The Art of Titanfall isn’t just the pretty images that make up the visuals in this game, but the very soul of the concepts behind it.

Opening with the part that most players are dreaming of most, the Titans, the book begins to establish the incredible sense of scale of these hulking steel beasts. Aside descriptions by the artists that built the Titans are digital artwork, renders, and and numerous representations of the various iterations leading to the final product. Just past the various side character profiles things get very interesting.

In the beta we spent all of our time wreaking havoc against our fellow Titans and pilots, with the occasional AI-driven mechanized troops in the mix. It’s in this art book that we get our first good look at some of the vicious beasts we’ll encounter in the game. It’s just two pages, but the promise of Kaiju vs. Titan combat is enough to raise an eyebrow. I just wish there was more here as this section is rather spartan.

The vehicles of Titanfall aren’t just the bipedal mechanized types, but also the transportation modes that deliver your troops to the battlefield. From carriers to troop landing craft, each is shown not just from an aesthetic angle, but also one of mechanics. Loading ramps, thrusters, escape pods – Respawn thought of all of these tiny details. Will the turreted jeeps and tanks be usable vehicles in the final game? Could the oversized 6-wheel unnamed behemoth be a troop carrier class vehicle? The possibilities of a bit of Tribes in with our mechanized combat could bring an interesting dash of speed.

It’s no surprise that the house that brought us Call of Duty have spent a great deal of time on the weaponry in this game. Pages after pages of incredibly detailed weapons, mods, and variants are present and reporting for duty here.

While we only got a few maps to toy around with for the Beta of Titanfall, the locations section of this book give us a glimpse of some of the areas we might get to crush under the feet of our rolling thunder. Tight corridors with wall-running potential, building interiors where Titans do not tread, and skyscrapers stabbing deep into the sky show some of the mixed environments ravaged by war that we’ll see very soon. The industrial world of Demeter (named after the Greek Goddess of the Harvest) helps terraform this world, but it also represents a strategic target that will make for a nice battlefield. Colony looks exactly like its namesake, mixing fragile wooden structures and old-world decay with the ultramodern. It’s the Boneyard location that is likely the the aforementioned Kaiju combat. Filled with the skeletons of felled beasts far larger than any Titan, the sandy planet reminds me of Pitch Black – high praise indeed.

The remainder of the book is dedicated to maquettes; small (or sometimes large) representations of the in-game asset counterparts. In this case, the team at Respawn had models built of each of the Titans, the gear of the various factions, and the battle vests worn by your character. The amount of conceptualization and manual dexterity required to build these maquettes must have been incredible as the detail here is stunning.

The final few pages detail what had to be one of the most surprising things I saw at E3 last year, the game notwithstanding. I’m speaking, of course, of the full-sized Titan that graced the show floor. Standing easily 2.5 stories tall, this beast was built to fully demonstrate the incredible size of these walking tanks. Sadly only a handful of pictures and not a lot of backstory is presented on the prop, but it is impressive just the same. Similarly, there are not as many hand-drawn concept sketches as I’ve seen in other similar art books – perhaps a consequence of a great deal of the artwork being digital from the start.

In the end, The Art of Titanfall is a great demonstration of the work that Respawn has put into one of the most anticipated titles for 2014. While it doesn’t dig as deeply into some of the early concepts before the team truly settled on the gameplay model we see today, it does give a great look behind the curtain. If you just can’t get enough Titanfall, this is the definitive companion piece, and a must-have for any fan. There are only 500 of these in print worldwide, so if you are going to pick up a copy now is the time.