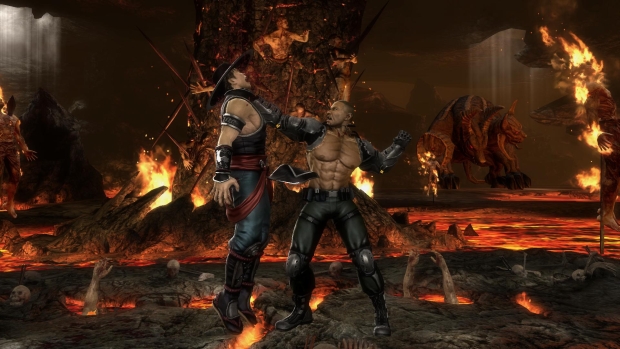 If you remember correctly, Mortal Kombat was released for consoles all the way back on April 19th, 2011. Its release was met with immediately jubilation as everyone realized that NetherRealm had finally done it, they created another fantastic Mortal Kombat product. That product then received some pieces of DLC as time went on, most notably some new characters. Now, a whole 2+ years later, WB and NetherRealm have released the Komplete Edition (featuring all the DLC) on our nice personal computers. How does this PC version stack up? Or better yet, does this two year old game still impress like it did upon release?

[singlepic id=14923 w=320 h=240 float=left]Obviously the biggest inclusion in this Komplete Edition are the four DLC characters. Those four characters all play fairly well, though being able to fight as Freddy Krueger remains out of place. Each character possesses their own unique abilities that sets them apart from others, never making them feel like carbon copies of characters in the main game. Those aren’t the only new inclusions in this Komplete Edition as it also introduces three new fatalities and fifteen new skins. These new skins and tiny features are nice additions but to use those as justification for a brand new re-release is a bit of a stretch.

This Komplete Edition on PC is not only a re-release, it’s also the first time the game has appeared on computers. Always a nice little inclusion, NetherRealm makes the game search for optimal settings once you boot it. Once I started the game, that was my early indicator that NetherRealm was actually doing their best to make this PC version worth your bucks. Sadly, the video settings don’t expand past your typical texture quality, anti-aliasing, and anisotropic filtering options. While this isn’t exactly a big negative, it’s always appreciated when a game goes all out and lets you adjust the settings no matter how miniscule or confusing they may be.

What’s more important than the settings is the visual product they actually produce, which is far from disappointing. Mortal Kombat was absolutely [singlepic id=14922 w=320 h=240 float=right]gorgeous when released in 2011, there’s no disputing that. But this PC version has upped the ante just enough to keep eyes happy, even the eyes that spent hours and hours staring at the same game on a television screen instead of the PC monitor. While I will admit the visuals are far from drastically different than their console counterpart, the extra clarity and power you get with a PC is definitely noticeable.

Now for the actual game, which still continues to be a powerhouse of a product. Apart from the DLC characters, the actual roster is quite fantastic as well. The variety is unparalleled and simply put, the game features Smoke so I’m one happy camper. The characters are quickly put to use in the games much beloved story mode. Upon its release a few years back, I thought the story mode was by far the best one I had ever seen in a fighting game. That sentiment still holds true the second go around as the well-executed cutscenes and character moments continue to impress.

If you’re new to Mortal Kombat or the fighting genre, the game obviously features its version of a tutorial in the form of training mode. The mode is far from spectacular but it does its job well enough to warrant some attention from new players. One of the best uses of it is for learning new characters and the wide set of skills they possess. The perfected fighting game training mode still remains an elusive characteristic, not even the current top dog Mortal Kombat could achieve that feat.

[singlepic id=14921 w=320 h=240 float=left]One other feature that stuck on many people’s minds when MK released two years ago was the “Challenge Tower.” The Challenge Tower is a mode that gives you a ton of separate situations involving multiple characters and then forces you to complete them to continue your climb up the tower. These “situations” can range from a simple fight all the way to using Johnny Cage’s forceball and Stryker’s pistol to fight off incoming zombies. There’s no doubt that this challenge tower is an incredibly unique feature implemented by NetherRealm. It’s a feature that provides quite a bit of fun and tons of variety to a fighting game, a genre that has lacked that descriptor, variety, for years.

The one issue with the Challenge Tower comes in the form of having to play as other characters in order to advance up the tower. Don’t get me wrong, I know that’s one of the ways they achieved the aforementioned variety, but that doesn’t make playing as Nightwolf any more fun. I’m sure many people have their own character or two they hate playing as and when that character appears in the Tower, it makes you want to exit out and go to the story mode instead. In the grand scheme of things, the Challenge Tower is still a great idea and one that’s implemented fairly well. If only it would let me tell them I never want to play as Kano.

A vital part of every fighting game, be it on the PC or console, is the online. Most people use online to extend the life of their game and one negative thing[singlepic id=14920 w=320 h=240 float=right] MK did a few years ago was feature some notoriously frustrating matchmaking issues at launch. Unsurprisingly, those issues do not persist in the PC version. The issues this time around come in the form of the small player base. Not only does this make it frustrating for experienced players who want to test their skill, it also makes it nearly impossible for new players to hone their own skills. Leading them to only being matched up with the aforementioned veterans who are just ripping them apart round by round. It’s a frustrating issue and one that I have no clue how to solve, but it is also one to be wary of when purchasing the Komplete Edition. In-game, however, everything runs fine. I ran into very few connection issues and the lag between button inputs was never prevalent enough to be noticed.

The positives introduced in this PC port of Mortal Kombat are definitely noticeable, but are they worth the thirty dollar price tag? This is the question I continued asking myself throughout my time with Mortal Kombat: Komplete Edition. Even after spending many hours (and nights) with this installment, I still don’t have an answer. On one hand, Mortal Kombat is a fantastic game and you should own it no matter what platform you have. But on the other, is this PC version better than the console versions of the Komplete Edition? It definitely looks better, but the matchmaking hiccups are unsettling for most. In the end, that’s the decision you have to make. One thing is for sure, if you don’t own Mortal Kombat, you need to go out (or go online) and rectify that immediately. Even two years after its original release, Mortal Kombat remains one of the best fighting games ever made.