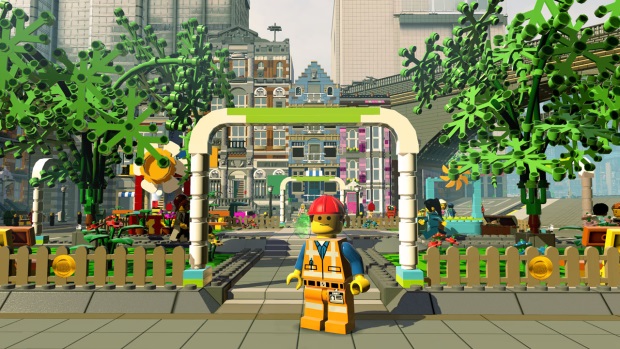 “Movie tie-in game” – feel like running away yet? Sure, there are the occasional gems that squeak through, but in general terms games that spring from (and are directly related) to a movie launch are well rewarded when they get the dubious honour of being called not-that-bad. LEGO The Movie Videogame is named appropriately, as it lacks any sense of individuality. But I get ahead of myself.

[singlepic id=18226 w=620 h=350 float=center]Everything is awesome!
First and foremost, I’ll try to avoid spoilers on the movie. In fact, if you’re even considering this game, I’d say you need to watch the movie first (Spaceship!). If you enjoyed it, you have played the best version of the game, since all of the charm comes from the movie premise and the cast of characters. The game itself simply follows the same arc, including some shortened footage of the movie to string together a leaner version of the story.

Unlike recent LEGO franchise games (such as LEGO Marvel Heroes), you are not given an open city to roam around in. Generally speaking, you’re given a free-roam area matching the theme of your most recent mission that is fairly small. With five distinctive sets, one in each of the plot’s major worlds, you can unlock extra characters, game modifiers that alter things like the value of collected pegs or increased health, and of course money from smashing everything in sight. Also much like LEGO Marvel Heroes, the same impassable barriers exist throughout both modes, requiring you to progress through the game before returning to unlock these areas. A perfect example would be golden doors – you need to have a character that shoots lasers. None of these are provided until you’ve progressed to near the end of the game, and even one that can be purchased won’t appear until you’re at the ¾ mark.

[singlepic id=18225 w=620 h=350 float=center]Darn, darn, darn, darny-darn!
I’d like to say there is nothing wrong with the game, but in my play-through, I can think of more than five occurrences where one of my characters was stuck and could not move. Returning to the main menu was the only fix – given the years of experience LEGO game developer Tt Games has had with the LEGO game engines and the lack of open-world exploration in this particular title, I would have expected clipping issues to not hinder a next-gen game where the presentation was by no means pushing any boundaries.

There were some moments in the game that felt inspired, such as some of the early back-story events that happened between key movie moments, Benny’s hacking mini-game which amounts to a LEGO Pac-Man variant, or Emmet’s building minigame where you use the wheel to select the missing piece as he builds a LEGO kit (he does follow instructions, after all). As the game dragged on these elements became less-and-less fun, and the puzzle solving more tedious.

[singlepic id=18224 w=620 h=350 float=center]I only work in black. And sometimes, very, very dark gray.
I experienced no problems with sound or graphics other than when the game itself would hang up, but by no means was it anything to write home about. In fact, if I were to ignore the controller in my hands, there is nothing to say that this game is next generation at all. I appreciate the availability of the game on the platform, however at full retail price it stings knowing that there are other games available which offer more for the same price.

[singlepic id=18227 w=620 h=350 float=center]Great. I think I got it. But just in case… tell me the whole thing again, I wasn’t listening.
Initially I was OK with the retread through The Special’s adventure, as the first few levels offer a ‘between the movie scenes’ moment. It felt like its take on the plot would yield some new laughs – I can assure you it did not. As the story continued it brought no real content to the already-complete theatrical presentation. If you skipped the film entirely perhaps some of the gags could have been funnier, but even Bad Cop’s chair-kicking required the film to appreciate. By the time I finished the main story I found no real pull to go back, even though there are a number of collectibles.

My 9-year-old son’s interest waned as well – this is not always a fair indicator of game quality, but it does illustrate LEGO The Movie Videogame failed to capture the interest of their target market. In fact, most recently he switched this game off in favor of LEGO Marvel Heroes. For reference, those clever little interlocking bricks are the toy of choice in our household and lost pieces have been a key player in having to dig through the results of a good vacuuming.

Sadly, LEGO The Movie Videogame fails to live up to the expectations set by both it’s source material and its video gaming forebears. A few inspired moments of gameplay give way to a bland and tired retread, while lacking any real substance to provide reason to revisit. Long loading times, last-gen caliber graphics and moments where bugs stop gameplay underline the lack of attention. At a sticker price of $60 I recommend you buy a movie ticket instead, and spend the rest on a LEGO set or two. At least if you tire of those, you can build something new and entirely different.