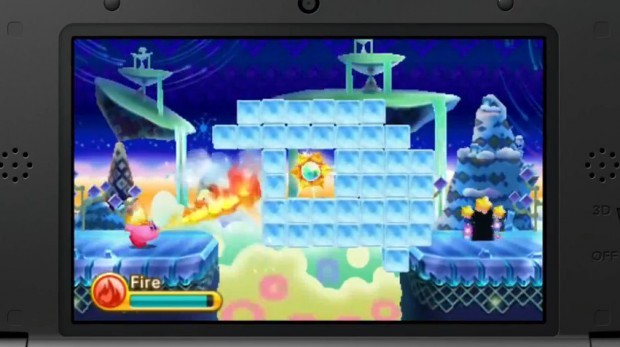 The walking puff known as Kirby has been one of gaming’s most beloved characters since he first appeared in black and white on the Game Boy. Since then, he’s appeared in more than a dozen titles that have varied in style from platformers, to 2D fighters, to racing games. Kirby: Triple Deluxe is the first Kirby game on Nintendo’s latest portable platform and quite possibly the greatest game in the series.

As the title might suggest, Kirby: Triple Deluxe contains three different primary game modes (and two minor ones), but the biggest and best by far is the “Story Mode.” Story Mode is the classic Kirby side-scrolling experience that has players absorbing enemies to gain unique powers, solving puzzles, finding collectibles, and fighting bosses. The story begins when, after a relaxing day, a giant beanstalk lifts Kirby’s house into the sky during the night and he finds himself in a kingdom called Floralia. Kirby meets a creepy creature called Taranza, who dethrones and captures King Dedede and Kirby gives chase. It’s a simple introduction to a game where the why doesn’t matter so much as the journey.

Kirby: Triple Deluxe has all of the tried-and-true signature elements of previous Kirby games, although almost all of them have been significantly improved over previous titles. There are more powers to absorb than any Kirby title to date ( I counted more than 25), and each of them gives Kirby a whole new roster of abilities that change how he handles. You’ll find yourself slicing through foes as a ninja, lunging at enemies as a beetle, and rolling through levels as a wheel, and gameplay rarely gets dull with all of the options. Kirby also has a particularly awesome new ability called Hypernova that he gains during certain parts of the game when he finds a Miracle Fruit. With the Hypernova ability Kirby’s inhaling powers grow exponentially, and Kirby can inhale whole groups of enemies, trees or even moving trains.

The addition of gyro controls during certain puzzle segments and new items and enemies that utilize both the foreground and the background also help break up the monotony that sometimes sets in after a few hours of playing a side-scroller, and make great use of 3D technology. Although the graphics in Kirby: Triple Deluxe aren’t the best we’ve seen in a Kirby game (there is some slight graininess compared to Kirby’s more beautiful Wii titles), the 3D visuals are used very well and add a third dimension to a 2D side-scroller, which isn’t something you’d expect from a game that’s, well…2D.

The enemies and puzzles in Kirby are probably the game’s weak point, as most of the enemies are characters that we’ve met before, and none of them have good AI which makes combat easy and predictable. The same can be said of the puzzles, which are largely simple and are repeated multiple times between levels. The bosses however, are some of the best we’ve seen in the series so far, and thankfully amount to more than absorbing apples and firing them back at an immobile tree (not that we all didn’t enjoy that boss fight the first few times).

The story mode of Kirby: Triple Deluxe took me about 6 hours to get through, but has plenty of replay value. For the first time in awhile, Nintendo has created a collectable I care about with Sun Stones. Sun Stones are required to advance through a world, but collecting them all unlocks a bonus stage in every world that you do so (and also makes you feel really good, if you’re a completionist like me). There are also about a billion keychains that you can unlock, which have no real use except that they’re shiny and the game will hang a randomly selected few of them on a vine in the main menu for you to admire.

The crazy thing about Kirby: Triple Deluxe though, is that so far I’ve only described one of five total game modes. My favorite alternate mode is a Super Mario Smash Bros.-ish 2D fighter mode called Kirby Fighters, wherein the player chooses one of Kirby’s powers and has to fight through the complete roster of every form of Kirby included in the game. You can also play online or through local wifi connection against your friends, but I was unable to test this aspect of the game as the servers hadn’t gone online as of this writing.

There is also a version of the Story Mode where you play as King Dedede and have to fight harder bosses that unlocks once you’ve completed the original Story Mode. It’s basically the same game as before, except you can’t absorb any powers, which isn’t as cool.

The remaining modes include a second fighting mode where you replay all of the bosses from either version of the Story Mode called The Arena, and a second mode where you play as King Dedede and bounce around to collect coins in a rhythm-based game. These two didn’t hold my attention for very long, but are welcome additions to a game that is already jam-packed with goodness.

I’ve played quite a few Kirby games, and Kirby: Triple Deluxe may very well be my new favorite. It has perfected the platforming experience and has more content than even Kirby could fit into his fat mouth.