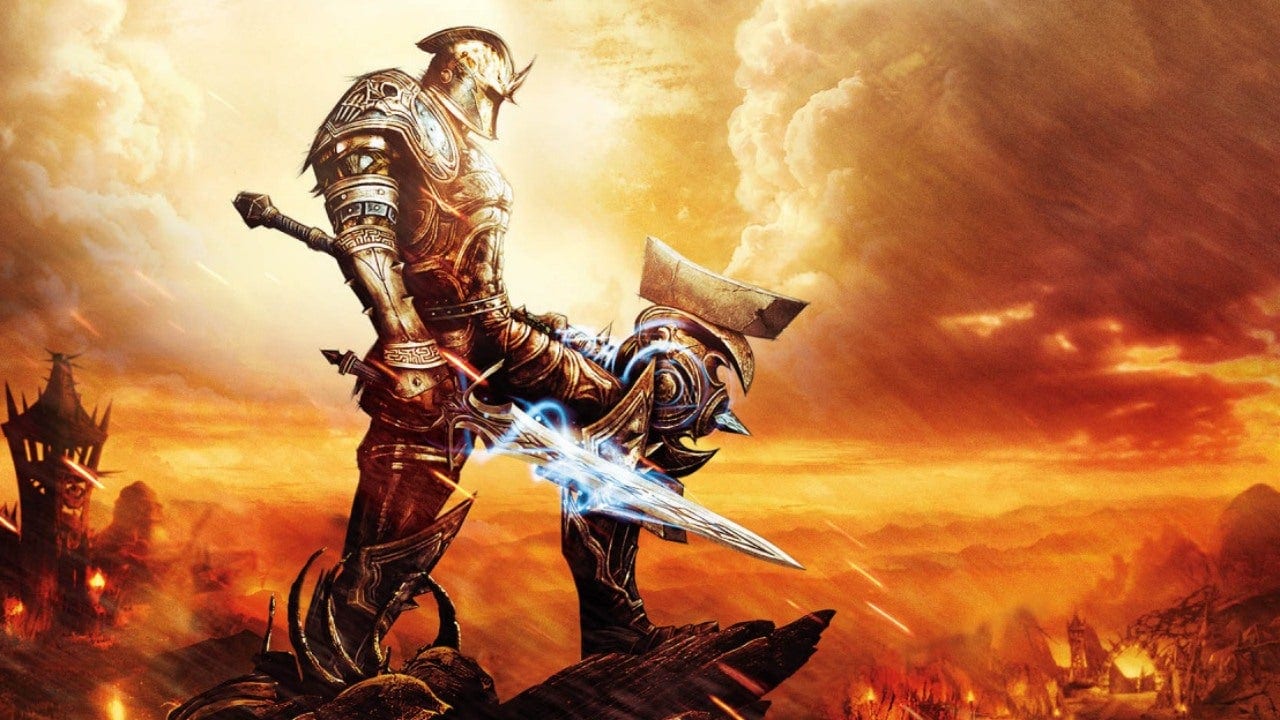 Starting your own game studio is a risky proposition. Many developers have crashed and burned trying to strike out on their own. (Anyone remember Ion Storm?) It was a shock when Curt Schilling, former baseball pitcher, announced 38 Studios, a new game development house. He later announced that he had bought Big Huge Games, creators of the Rise of Nations series. Eventually we found out that they were working on an RPG, not something expected from a company known for their real-time strategy games. Now Kingdoms of Amalur: Reckoning has been released, an ambitious project that swings for the fences. The only question left is if it is a home run or strikes out.

When the game starts out, your character is dead. You are being inventoried, and here is where you determine your gender, race, appearance, and class that have become standard in western RPGs are here. Once they show you on the stretcher, you are unceremoniously dropped into what looks like an incinerator. You wake up and find out that you were placed into the Well of Souls which has brought you back to life. You are the first one for the Well of Souls to work on, and most likely the last. 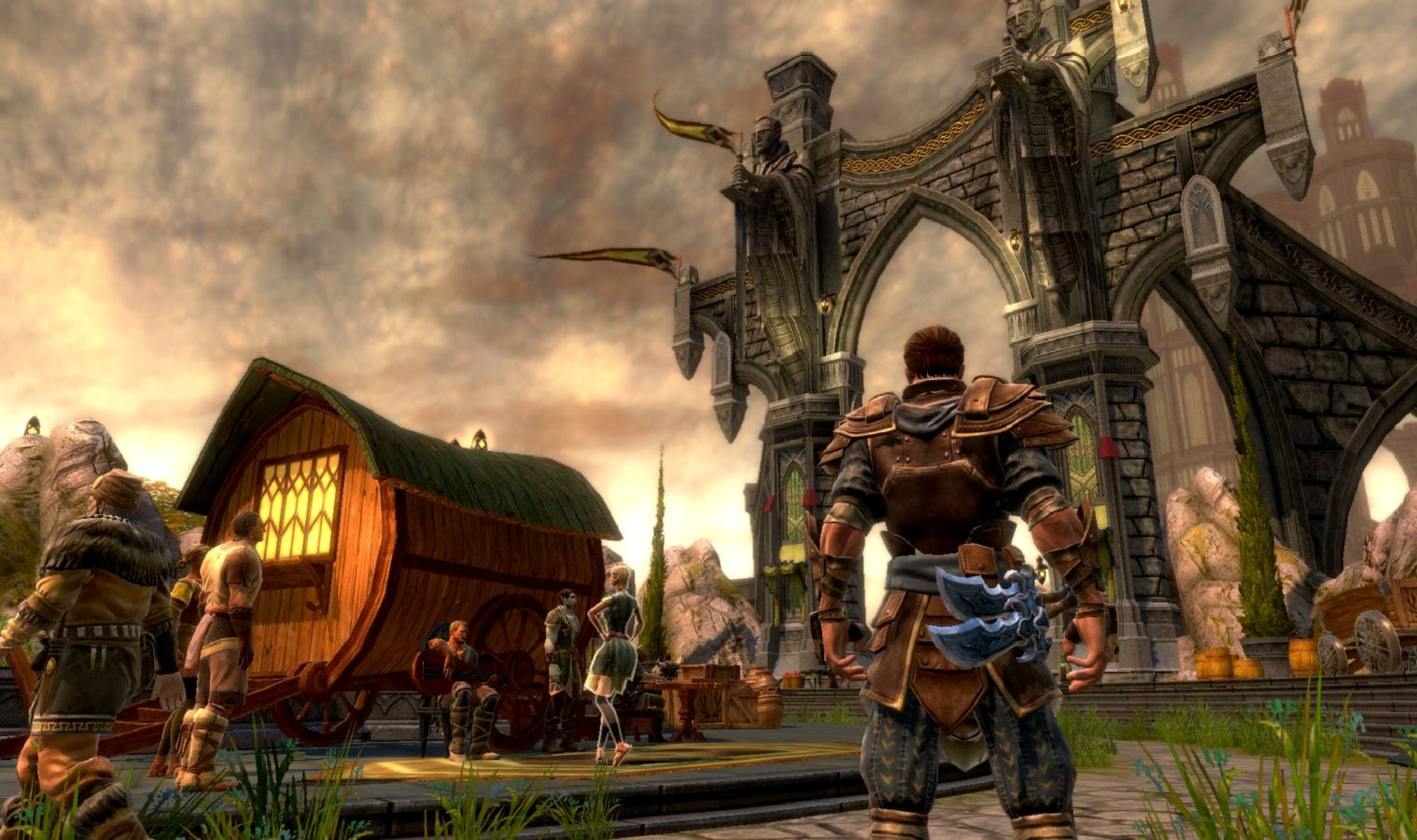 The story is written by R.A. Salvatore, and it shows in the dialogue. While there is a main bad guy with his minions, you interact with several characters that have their own objectives. Certain characters are good and some are bad, but you’ll need to work with plenty of shady characters to find out what has happened to you, and why a race is tracking you down. You get out of the story what you put into it, as you learn about the world through the conversations you have. The more topics you cover, the more you’ll find out.

That doesn’t mean that the quests are original. You have a main quest and plenty of side quests to complete. However, most of them are of the FedEx type, or the “kill X number of monsters.” They are all cleverly disguised, and the objectives of the quest will change mid-stream, but when you strip down the quests to their basic formula they don’t break the mold. You can encounter the quests however you want to. You don’t even have to touch the main quest if you don’t want to, as this is another open-world RPG. Completing quests will help you raise your level quicker than just going around and beating up monsters though.

How you react to others will also determine how you are treated within a city. If you are caught doing an criminal act or are captured by guards, you will either need to pay a fine or bribe the guards to get out. Be careful though, because it could end up costing you more if your persuasion stat isn’t built up. The easiest way to know if something is illegal is to look at the red hand and red text for that action. 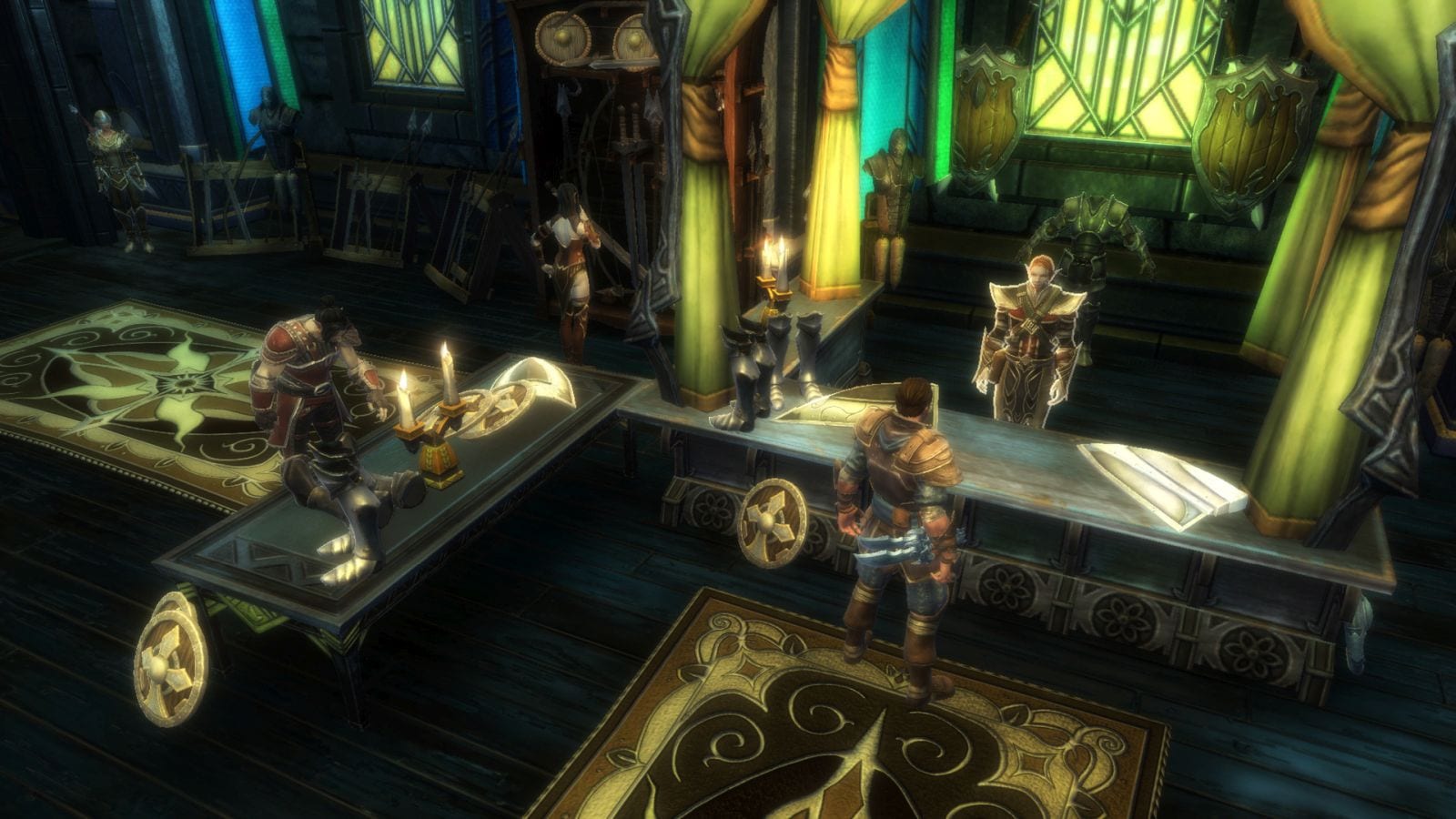 The way quests are handled makes completing them a snap. You can set any quest as the active quest in the menu system. The location of your next objective is highlighted in the mini map in the upper right hand corner of the screen. You’ll always know where to go to without wasting time wandering throughout the map. Once you have gone through a location, you can fast travel (or in the words of the Muppets, “travel by map”) to reach old locations quicker. This makes gaining your reward for completing quests easier.

The world of Amalur looks fantastic. The forests have lavish vegetation throughout them, with ruins scattered about. The cities contain nice cottages and inns. The caverns feel damp and dark. The varied color palate throughout every location gives the world a vibrancy not seen in many fantasy worlds on the computer screen. There could be more variety between the cities, but there is enough variety in the kinds of locations you’ll discover that it’s not a big deal. The monsters and characters you encounter in Amalur don’t look as good as the environment, but they are more interesting than the typical gnomes, elves, and fairies you’d expect to see. There is a bit of pop-in as you travel, but it’s never distracting. The particle effects are everywhere though, and they look great. It’s also highly suggested to install the game to your hard drive if you are playing on the Xbox 360. The load times are much shorter and the pop-in won’t be quite as drastic. 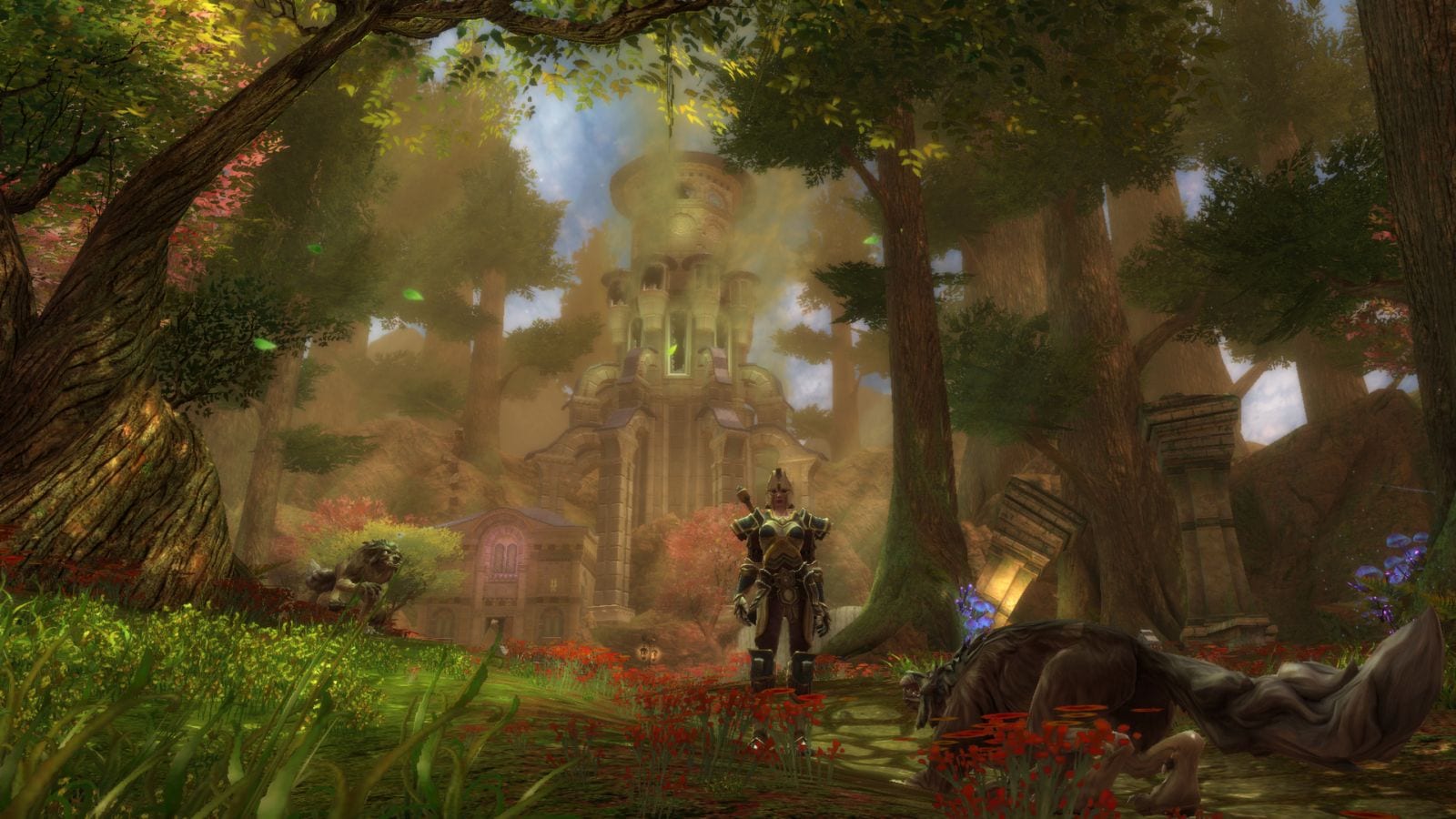 Musically there isn’t much to listen to. The soundtrack is barely audible and it’s not anything that you would be humming the next day. When you are fighting, the music gets loud and the drums pound.  It definitely heightens the intensity of the combat.

The voice acting is another story. The characters have the right amount of heft to their dialogue as they speak, and the dialogue is well-written. You also aren’t going to walk to a different village a half hour later and hear the same person with a slightly different dialect. You are given a couple of options as you speak with characters, and the characters will respond accurately depending on your tone and responses.

All of this might make Reckoning sound like another open-world RPG, but as I was thinking about the game, a few areas really set it apart. The first point is the combat, which is action-based and not turn-based. You always have a primary and secondary weapon at your disposal, and you use the X and Y buttons to use them. You don’t have to hit a separate button to switch between both weapons. This helps keep the combat smooth.  You do see numbers pop up after each hit, so you know that there are some calculations going on behind the scenes. While you don’t have direct control over who you are attacking, the AI does a great job of attacking the closest threat. If you attack and miss, it’s most likely you weren’t close enough to the enemy. Blocking is an important part of combat as well, and you really don’t want to ignore that aspect of combat.

As you level up you gain points that can be placed in three different groups: Might, Finesse, and Sorcery. These give you extra perks to your stats depending on if you are playing as a Fighter, Thief, or Mage. However, your equipment and abilities aren’t restricted by your class. If you are a fighter but want to sling magic missiles or swing a mage’s staff that gives electrical damage, there’s no reason that you can’t do that. If you want to be a thief that swings a massive hammer of destruction, you can do that as well. You might not get special buffs with those weapons, but you might need to change up your equipment because of enemies’ vulnerabilities to specific kinds of damage. 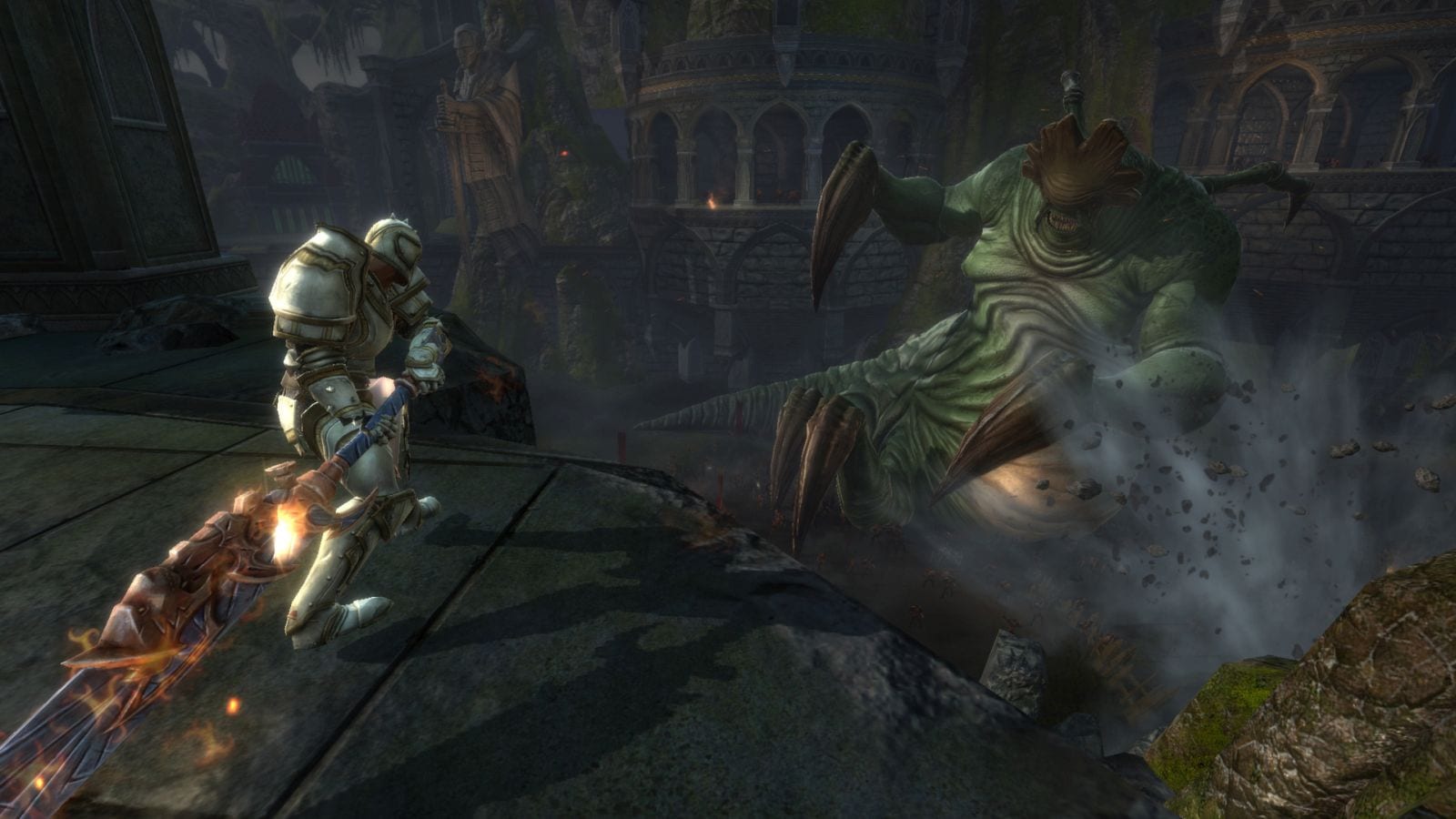 Another option that differentiates Reckoning from other open-world RPGs is the fact that you can completely rebuild your character at certain points in the game. If you don’t like the way your character’s stats are set, or you just want to play as a different character, you can change your character to anything you want with the same amount of points. It will just cost you some gold to do that.

Another thing that makes combat so satisfying is how they handle looting. When you have defeated a group of enemies, usually only one of them has loot on them. They will glow so you know which one to loot. It’s much better than needing to go to every single slain body and finding out some have stuff worth picking up, and others don’t.

With the looting comes a lot of weapons, armor, and potions. After a few quests, your inventory will get full and you’ll need to get rid of some of the loot to get the better equipment. You won’t be getting too attached to your weapons and armor. You might get an awesome sword, but not long after that you’ll get an even better sword. Same with bows, hammers, staffs, chest plates, boots, and any other equipment you will pick up.

The manual is located on the disc, and I know that EA has decided to scrap manuals in their games. However, it would have been nice to have a reference sheet so that you could see all the icons and some of the important information about the factions, races and classes. I know, that’s why you purchase a strategy guide, but some of this information would be better suited on a card you can take out and look at while you are playing the game. 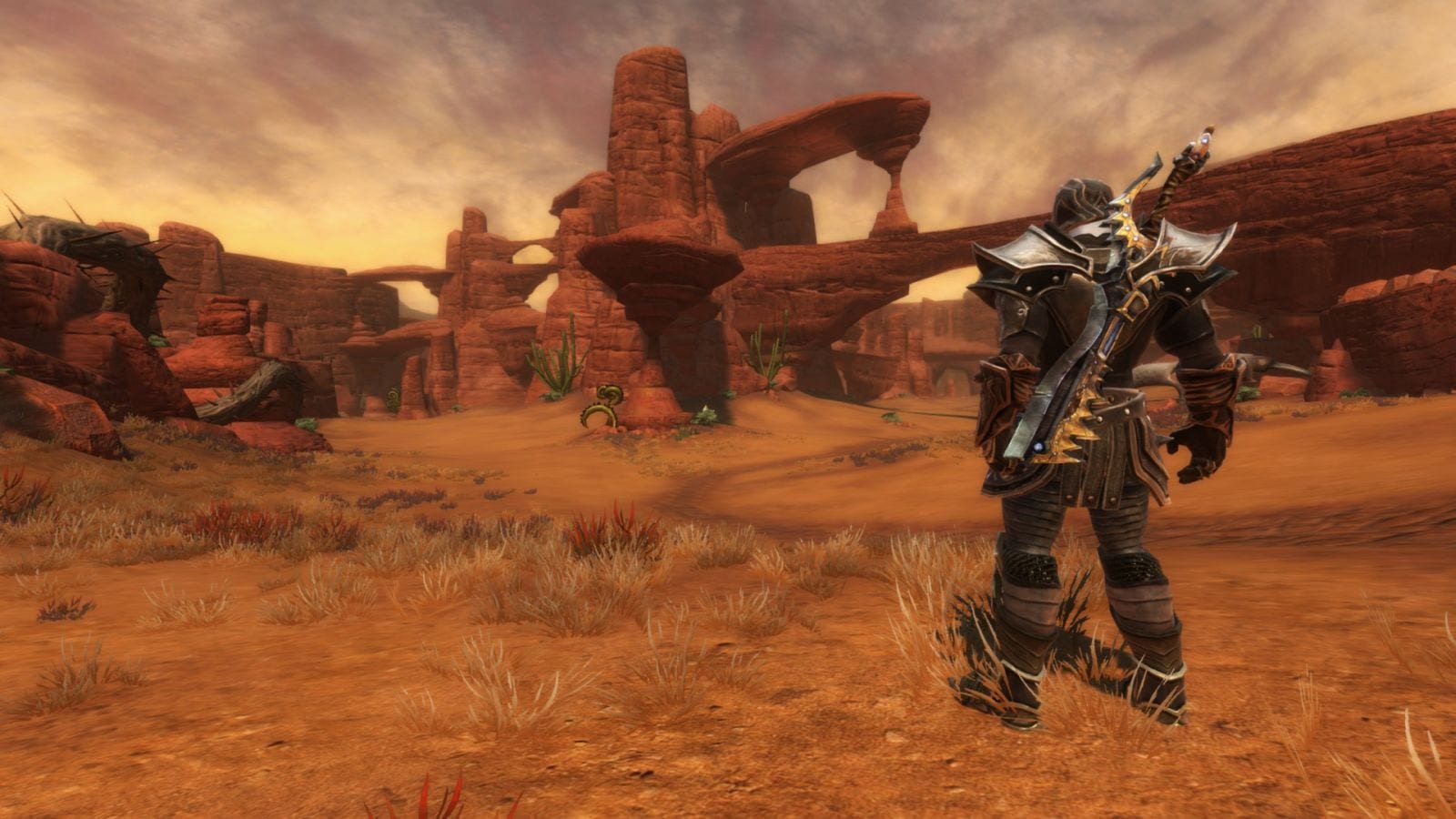 I haven’t even covered the alchemy system, blacksmithing, lockpicking, persuasion, sagecraft, and other skills. There are a few factions within the game, and each have their own separate quests.  All of them have their own different bonuses for joining them. Needless to say, the game is quite deep, with plenty of ways to customize your character. You can concentrate on the aspects you want to, and largely ignore the ones you don’t.

I almost wish I didn’t have to review Kingdoms of Amalur: Reckoning. A game like this isn’t meant to be powered through. Instead, you are encouraged to take your time, get to know the world and the inhabitants of it, and savor the universe surrounding you. This is a game that I want to be playing when not playing it. I wanted to see what new weapons I could get, what new equipment would show up, and see where the storyline would go to. The combat really sets the game apart, and once you play Reckoning you’ll notice how stiff the combat in other RPGs is. I have to hand it to 38 Studios and Big Huge Games with their first RPG attempt. They have not only hit a home run, they hit it out of the park.

The combat is what really sets the game apart, and once you play Reckoning you'll notice how stiff the combat in other RPGs is. I have to hand it to 38 Studios and Big Huge Games with their first RPG attempt. They have not only hit a home run, they hit it out of the park.

While not working as a Database Administrator, Keith Schleicher has been associated with Gaming Trend since 2003. While his love of video games started with the Telestar Alpha (a pong console with four different games), he trule started playing video games when he received the ill-fated TI-99/4A. While the Speech Synthesizer seemed to be the height of gaming, eventually a 286 AT computer running at 8/12 Hz and a CGA monitor would be his outlet for a while. Eventually he’d graduate to 386, 486, Pentium, and Athlon systems, building some of those systems while doing some hardware reviews and attending Comdex. With the release of the Dreamcast that started his conversion to the console world. Since then he has acquired an NES, SNES, PS2, PS3, PSP, GBA-SP, DS, Xbox, Xbox 360, Xbox One S, Gamecube, Wii, Switch, and Oculus Quest 2. While not playing video games he enjoys bowling, reading, playing board games, listening to music, and watching movies and TV. He originally hails from Wisconsin but is now living in Michigan with his wife and sons.
Related Articles: Kingdoms of Amalur: Reckoning
Share
Tweet
Share
Submit