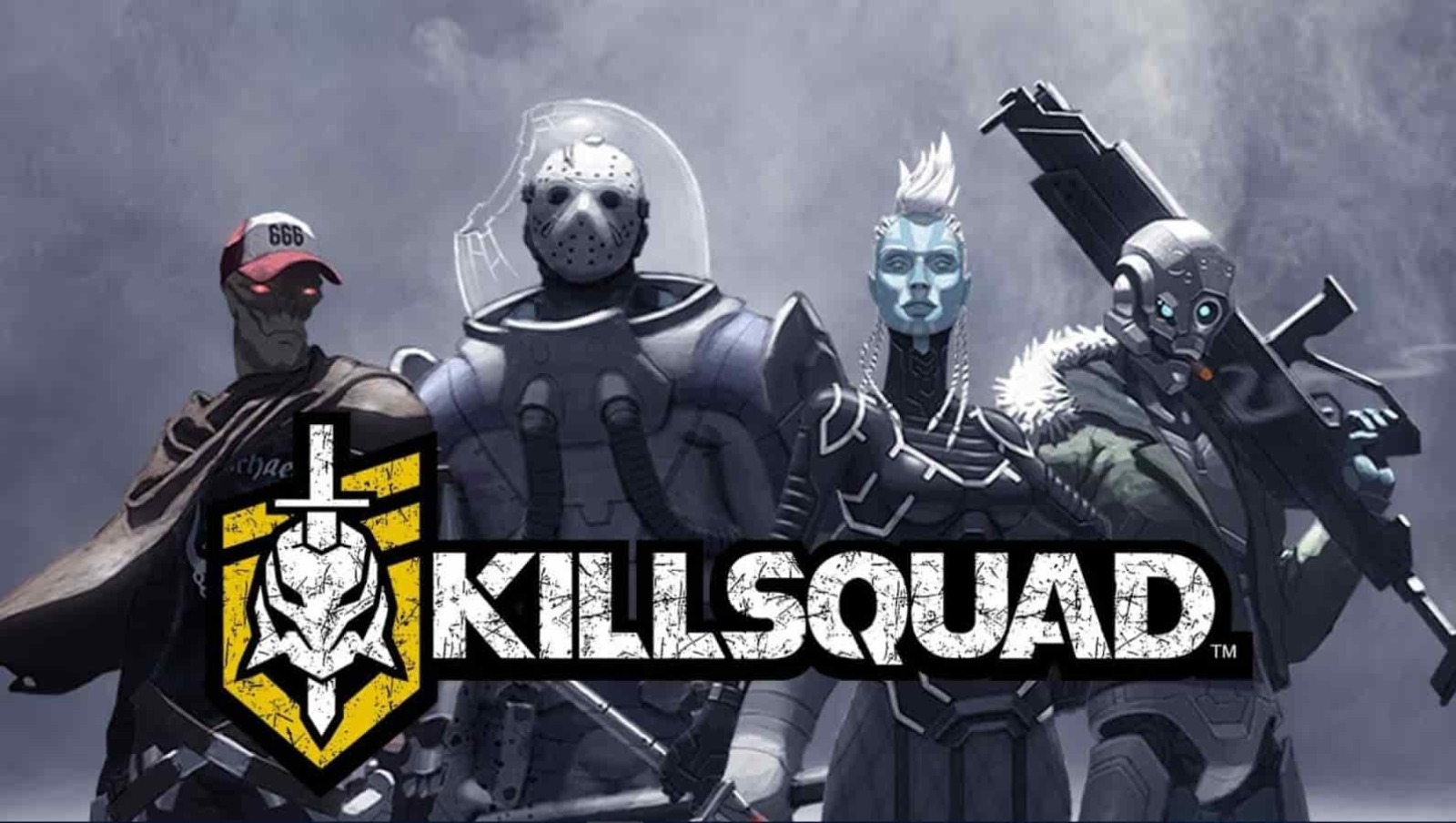 When Killsquad was first released in Early Access back in summer 2019, it was met with a fairly frosty reception. However, with a further two years of development and with plenty of perseverance from the developers over at Novarama, I am pleased to say that this twin stick ARPG is in a pretty good state and definitely worth investing some time into if you’re a fan of the genre and are up for a grind.

Killsquad is a mission based game where you’ll join a lobby with your buddies, strangers, or by yourself, select one of five mercenaries, set up your load-out, and plunge onto a planet to complete a contract in exchange for credits and sweet, sweet loot. There’s no messing around here: within minutes of loading up the game you will be blasting your way through your first mission. No overly long cutscenes or time consuming tutorials, just straight to the action. It’s clear that Novarama respects their player’s time and trusts them enough to learn as they play, which is a philosophy that I appreciate.

The missions, referred to as ‘contracts’, usually have a single objective to accomplish for you to succeed. It could be to hunt down a boss and defeat it, escort a payload, protect a drill while it extracts resources from the surface, or survive waves of enemies. There isn’t anything particularly revolutionary in terms of mission structure; it’s all pretty standard fare that we’re used to seeing. There’s the odd unique objective every now and then, such as having to use temporary points of safety to escape an area that is being consumed by toxic gas, but these are few and far between. It would have been nice if Novarama had tried to push the boat out with a few more unique missions or even some set piece moments, but, thankfully, Killsquad’s gameplay more than makes up for the somewhat lacklustre mission design.

Each of Killsquad’s five mercenaries, essentially the game’s classes, bring their own unique flavour to each mission. Troy is a nimble wielder of two pistols capable of unleashing massive damage; Kosmo, the tank in the roster, can decimate foes with his sledgehammer as well as block damage; Cass is a deadly, lightning-fast warrior who can slice through waves of enemies with ease; Zero offers healing and resurrection services for allies, while Ekaar, the most recent addition, utilises a shotgun and robotic minions to blast his way through missions. Each class has a passive, a unique resource, a basic attack, two standard abilities plus an ultimate ability with a long cooldown. Unlike regular abilities, each class has access to three ultimate abilities that can be selected before a mission. The classes feel vastly different from one another, with Kosmos’ slow but devastating melee attacks contrasting nicely with Troy’s high RPM pistols. Abilities are generally skillshot based, but some, such as Kosmo’s Whirlwind, are channeled, and others, like Troy’s Execution, don’t need to be aimed at all. 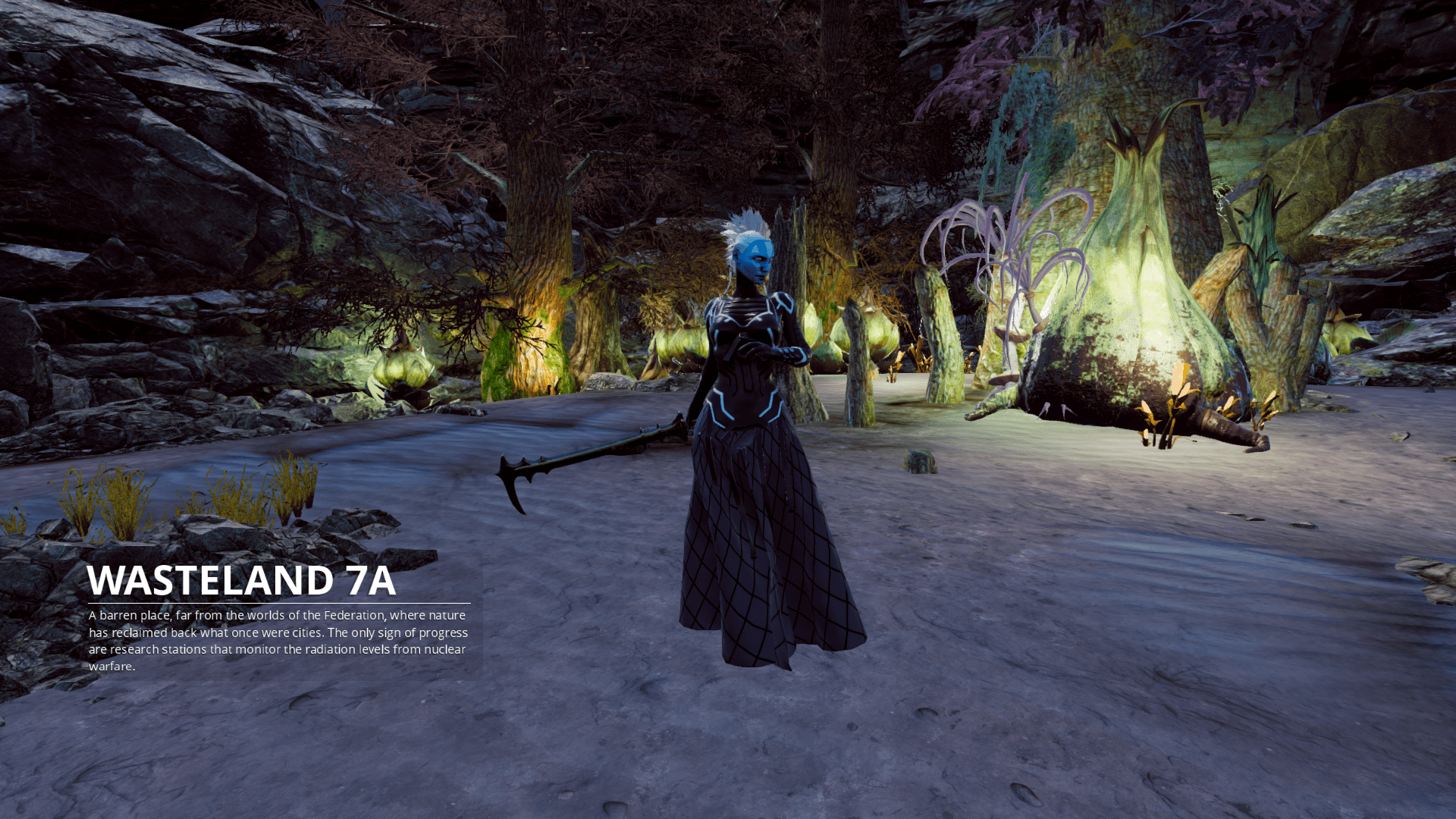 I experimented with each of these classes, and found them all to be enjoyable and powerful in their own right. Zero is essential when playing co-op, but as most of my time with the game was spent solo, he wasn’t particularly useful. Kosmo’s damage mitigation is powerful in solo play, but ultimately I chose to invest most of my time into Cass, as she is both powerful and a blast to play. Cass uses a thin two-handed sword and can attack wickedly fast. She also has a dash with two charges that refill every few seconds, and basic attacks empower her dashes. Empowered dashes also do damage to all enemies you pass through.

The first of Cass’ abilities, Phase Thrust, is a medium-ranged conal attack that does a good chunk of damage, and can be weaved into her auto attacks. Her second ability, Teleport Shuriken, allows you to fire a shuriken at an enemy, and if it hits, you can activate the ability again to teleport behind the enemy and deal massive damage. Cass’ ultimate abilities are Phase Breaker, a powerful frontal cone attack, Phase Thrust, a similar attack but in a line rather than a cone, and Phase Shift, a defensive ultimate that allows you to go invisible for a short time which can be ended early to do some damage. Cass’ toys are a lot of fun to play with, combining fast paced attacks with a ton of mobility to achieve the whirling ninja fantasy that Novarama were unquestionably going for.

Gameplay is challenging, but extremely satisfying. Most enemy attacks are telegraphed, giving you a window of opportunity to react. Things can start getting really hectic when there are a lot of enemies on screen, which is the case fairly often. Dodging attacks and projectiles while weaving in your own demands a certain degree of mastery, especially in later levels and while playing solo. There are a decent amount of enemies to fight and a good number of planets to explore, even if they are all the typical things you would expect from a futuristic setting such as this. Most enemies take the form of primeval aliens or sentient cyborgs hellbent on your demise, and while they’re not particularly exciting to look at, they’re very exciting to fight. I would, however, like to give a special mention to Killsquad’s many bosses. In most cases, these fights are challenging and unique, often multi-phased requiring certain tactics to overcome. Some of them have really cool models, too. 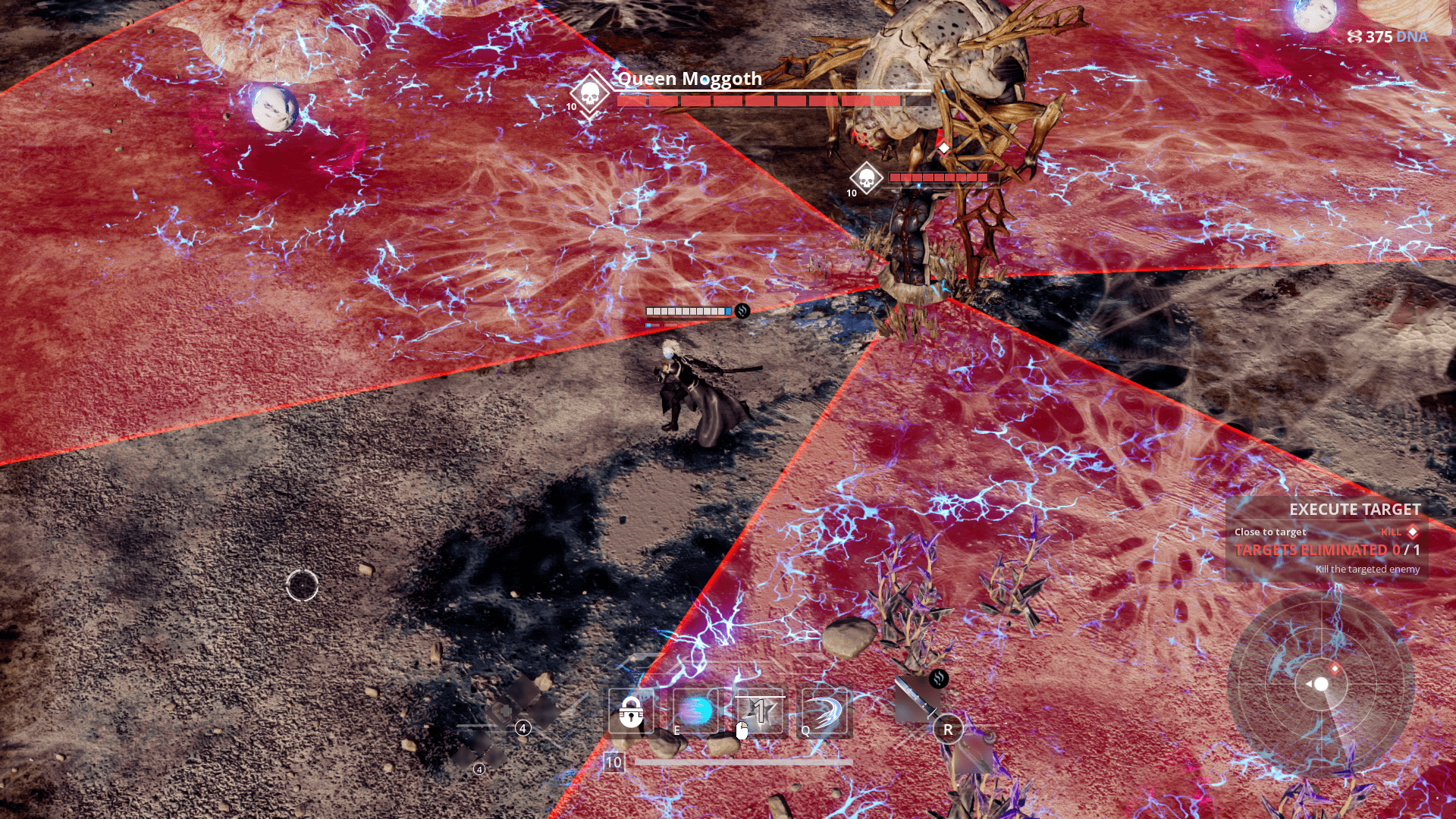 Outside of fairly generic enemy design, Killsquad looks and sounds great (apart from the voice acting), even on low settings, which I unfortunately had to make use of to keep the game running smoothly. The majority of the planets, although liniar, pop with colour, and both your own and your enemies’ spell effects can dazzle at times. Even during heated moments when there are a flood of particle effects all popping off at the same time, the crystal clear telegraphing still manages to accurately depict danger, and as a result, deaths never feel unfair.

On the gameplay front, Killsquad is mostly a triumph. The progression, on the other hand, is a bit of a mixed bag for me. As mentioned earlier in the review, completing missions will reward you with credits and gear. Gear comes in the form of weapons, support items, prototype items, talismans, and consumables. Each piece of gear, except consumables, had a Vector level attached to it, which represents how powerful that piece of gear is. Every mission has a Vector level associated with it that gives you an indication of what your Vector level should be before taking the mission on. To grow your Vector level, you’ll need to keep getting better gear. Missions themselves don’t drop a lot of gear, so the best way to reliably improve your Vector level is to use credits earned from missions and from dismantling obsolete gear to purchase gear from the store. This is fine in theory, but after a while you’ll need to start grinding older missions to earn enough credits to keep up with the scaling difficulty of the game. Thankfully the core gameplay is super fun, but just be prepared for that grind.

For all the grinding you’re bound to do, the gear you’ll earn isn’t particularly exciting. Weapons have an elemental attribute attached to them, such as fire or poison, and certain enemies are weak to certain elements. When you select a mission, the game tells you which element will be most effective, so it’s really just a case of making sure you have the right weapon equipped for the job. Support and prototype items, so far at least, only offer boring passive bonuses, such as increased health or resistances to certain types of damage. While consumables don’t increase your Vector level, they do provide essential lifelines such as heals and resurrects, as well as powerful bonuses such as giving your attacks a chance to freeze enemies for a short amount of time. 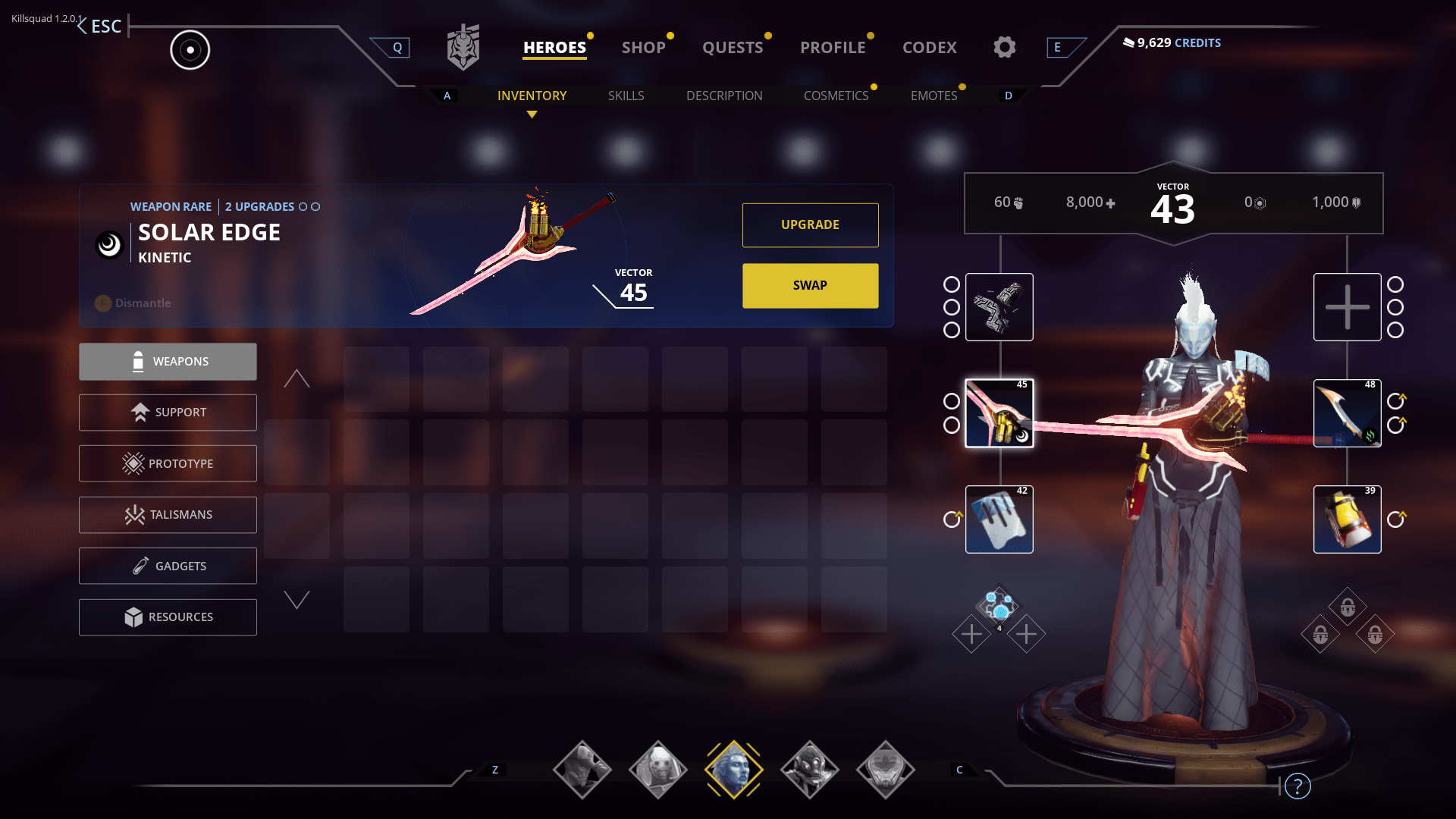 Outside of gear, you also grow in power by investing skill points into your classes. When you complete a mission for the first time with a class, you’ll receive a skill point to invest into their abilities. These often manipulate the ability in some way, making it more powerful. Cass’ Teleport Shuriken, for example, can be upgraded to allow the shuriken to jump to an additional enemy, effectively doubling its power. I found investing skill points to be rewarding, as not only did they make my classes more powerful, but also opened up exciting new gameplay opportunities. This is what I wish gear did as well.

As of writing this review, Killsquad has been out of early access for just over a month, and in that time has had a halloween event as well as a chunky update to one of its game modes. With more updates and events on the horizon, this could be one of those pick up and play games that you and a few buddies jump into every once in a while that will – despite its issues – guarantee you a healthy dollop of fun.

Whether you’re playing solo or co-op, Killsquad’s skill-based, challenging, and fast paced combat is a triumph. While the lacklustre mission design and unexciting loot end up letting it down a little, this one can still be a blast to jump into if you and your friends are up for a grind.

Kristian (or Kris for short) is a copywriter by day, button presser by night. Based in the UK, Kris loves any game that allows him to swing a sword, fire an arrow, or sling a ball of fire, but ultimately he's not too fussy. On the rare occasion Kris isn't writing or gaming, you'll probably find him in the bath with a good book.
Related Articles: Indies, Killsquad
Share
Tweet
Share
Submit