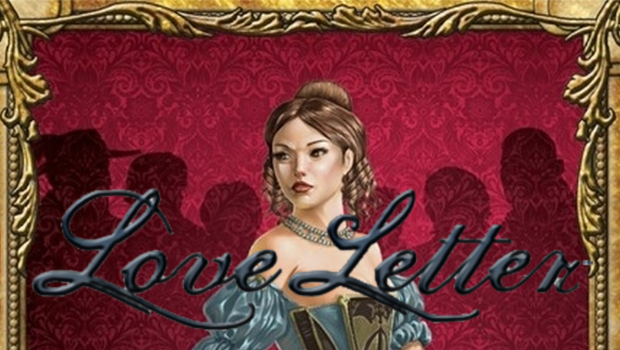 With more awards to its name than cards included in the game, Love Letter has created quite a stir in the boardgame world. Touted as a ‘micro game,’ Love Letter’s success has spawned a whole host of other smaller-is-better games. While Love Letter was not the first game to approach design in such a minimalist way, the impact has been huge. Originally published by a Kanai Factory, a small Japanese publisher, it was picked up by AEG and folded into the Tempest line. It now sits solidly on top of the pile, outselling all of the other Tempest games combined.

Love Letter steps in as the sequel to episode one of the Tempest series, Courtier. The princess is so distraught over the imprisonment of her mother, she shuts herself deep within the confines of the castle. Being the good guy (or girl, the Tempest world is much more progressive than our own) you are, you take it upon yourself to cheer up the princess.

At the start of each round, players are dealt a monstrous hand of one card. The cards represent different personalities in the castle who are acting on your behalf. Whoever is in your hand represents the character who is currently holding your letter. On a players turn, a single card is drawn, and a single card is played. This means that you are picking which card you want to keep in your hand. When a card is played, an associated action is also taken. As an example, when a guard is played, the active player may guess the card in another player’s hand. If they are correct, the targeted player must lay down their card, and sit out for the remainder of the round.

Play continues around until the last card is drawn. As this point, whoever is still in the game, very often only two people, compares the rank of their cards. As cards rank represents the characters ‘closeness’ to the princess, the player with the highest rank is deemed to have been successful in delivering their letter and awarded a love cube. The cards are collected, shuffled, and re-dealt and a new round begins. When a player wins enough rounds, they have proven their love for the princess and are declared the winner.

The most common packaging for Love Letter is a little velvet bag containing sixteen character cards, four reference cards, thirteen cubes and an instruction booklet. That is it. The cards and cubes are standard size and quality. Due to the constant handling, many people choose to sleeve their cards. Love Letter shares the same art assets as the rest of the Tempest line, so players will recognize their favorites throughout the series. The graphic design is appealing and helpful to game play.

Games of Love Letter are quick. Even with the most arduous gamers, games take only 15-20 minutes. The rules are simple to teach as there are only eight card types, and a single action to be taken. The rule booklet does a good job of providing examples of each card and how it is used. Love Letter works fine for all player counts. The feel of the game does change a little during a two player game, with strategy leaning more towards bluffing and out thinking your opponent, but still plays just as well.

If you didn’t notice, Love Letter shares almost nothing with its predecessor, Courtier, or any games that come later in the Tempest series. Besides the storyline, and some shared art, Love Letter’s game play stands alone in the Tempest line. It should also not be hard to guess that Love Letter is not a super deep game. Most of the strategy is being able to keep track of what cards have been played. What it lacks in strategy, it makes up for in quick and easy play. Some consider this the quintessential filler game.

After many repeated plays, Love Letter can tend towards canned, or ‘solved’ plays. You learn very quickly that if you have certain card combinations, it is in your best interest to play a certain way every time. You never want to play the King if you have a guard… you just don’t. These combinations are affected slightly by cards that have been played, but for the most part they are static. This means that two experienced players will win or lose based on luck of the draw and little on skill.

You are going to have to pay attention when playing Love Letter. Player interaction is high, and turns are quick. One distracted player can bog down an entire session with “Wait… what just happened?” If everyone is invested, game play can almost feel frantic. That is not to say that Love Letter cannot be played at a calm relaxing pace. I would even suggest it for all of those people who are looking for a game to play with their non-gamer significant other.

Surprisingly, theme comes in that little bag as well. Sure, like the depth of strategy, there is not a ton of theme but more than expected from a small package. When I played for the first time, and lost, my wife held a miniature wedding ceremony between her and the princess with the priest character presiding. Players don’t refer to the cards by their numbers, but rather by their names.

I don’t normally talk directly to the cost of a game, but at $10 there is little reason to not go out and buy this game if you don’t already have it. The cost is less than a movie ticket. Heck, it is less than a drink at some sporting events. Working the price break down, I would bet that my copy of Love Letter is near the $.25 per game price point.

Love Letter wears its awards well. There is no excuse to not have Love Letter in your collection. The game works well for a surprising number of situations. Throw it in your bag before heading out and you will find yourself playing at restaurants, bars and coffee shops. If you get to a gaming session and not everyone has shown up, pull out Love Letter and play instead of awkwardly talking about the weather… or worse, a sports team.