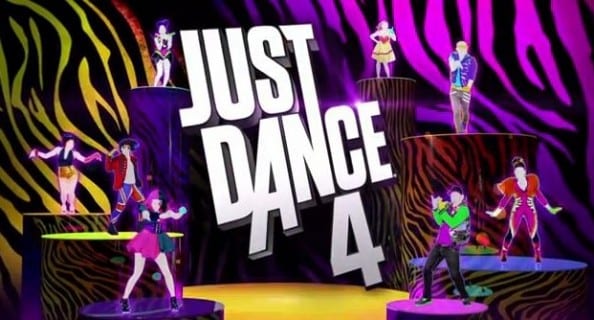 The Just Dance series is no longer a newcomer to the dance game genre. It seems like it was just yesterday that Dance Dance Revolution had a monopoly on rhythmically-inclined gaming, but times have changed. Motion-based innovations that began with the Wii and will continue to be prevalent with the Wii U, the Kinect, and the Playstation Move indicate that the dance genre of gaming is here to stay. Just Dance 4 picks up where Just Dance 3 left off, adding fifty tracks to the series’ already robust library. While the game is as entertaining as one might expect from previous titles, it does nothing to innovate the series.

The title of the game should say it all: Just Dance. And after you’ve figured out the menu system (which is a little harder than many Kinect titles), you’ll do just that. Just Dance 4 has the player move along with a dancer onscreen, and players earn points for doing so with greater accuracy. Each song has six “dance quests,” which serve as objectives the player tries to accomplish within each song. As the player completes the dance quests, they gain points to power their mojo, which accesses various unlockables. The library of Just Dance 4 include songs still relevant to today’s musical tastes, and some that are more bizarre choices (e.g. Rick Astley’s “Never Gonna Give You Up”). What’s more is that additional content, such as alternate choreography for certain songs, are available as you complete challenges on Ubisoft’s Uplay system. The game also includes several other modes like “Just Sweat,” a workout style of gameplay aimed at keeping the player moving, and “Dance Battle,” which pits players against one another in a four-way throwdown. However, some elements from Just Dance 3 are absent like “Simon Says” mode, the eight player functionality, speed-shuffle, medleys, and playlists.

The dance moves can be a little silly, but the Just Dance series has never been one for legitimate dance moves, or even challenging choreography. Instead, Just Dance 4 aims to be the casual experience for friends at parties, which it pulls off well. In particular, the “duet” songs that incorporate two-person choreography are especially fun, and show off the Kinect’s potential. While the motion-tracking is generally good, it can become spotty when all four players take the stage. However, the biggest motion-tracking pitfall comes into play in the menus, which aren’t as intuitive as other Kinect titles, and will oftentimes have you poking hopelessly towards your television while trying to select a song.

Visually, there isn’t much to Just Dance 4, as it has been with previous titles, and while the graphics aren’t terrible, they aren’t very interesting to behold either. This is especially true if you’ve been following the series, because they haven’t changed at all. The audio in Just Dance 4 is very good, since it’s entirely comprised of (mostly) good music, but the occasional odd song choice (e.g. Will Smith’s “Wild Wild West) leaves me wondering, “Why?”

If you have been a fan of the series so far, you’ll love Just Dance 4, because it’s basically just an expansion pack for the previous titles. This has been going on for awhile now, so anyone looking to jump into the series with Just Dance 4 won’t have any new reason to. The good news is that the basics, such as its over-the-top style, four player functionality, and diversity of tracks have returned. The bad news is that the opportunities this series has had to improve, like their unhelpful dance cards, crummy menus, and sometimes shoddy motion-tracking have gone unfixed. Of course, if you’re willing to pay fifty dollars for a Just Dance expansion pack, then go pick up a copy and just dance.