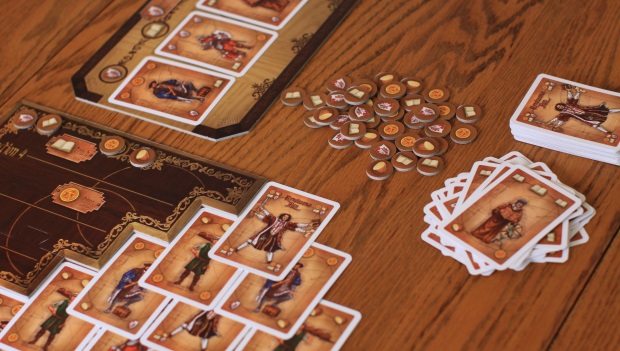 Leonardo da Vinci is the consummate example of the “Renaissance Man.” He enjoyed renown as a painter, engineer, sculptor, mathematician, and writer (although his KATANA skills were overrated IMO).

YOU are the multi-talented genius in Rio Grande’s RENAISSANCE MAN. Your goal is to lay out cards (representing workers) in a pyramid formation by matching up icons with the cards underneath. Can you complete the pyramid and produce a successor, worthy of carrying on your legacy? Or will this futile endeavor end in frustration and failure? The answer is somewhere in between.

The game includes four irregularly shaped boards, cut into a stair-step pattern that defines the edge of the pyramid. Each player also gets a wooden Pawn and four wooden Knights. The box also includes a smaller board for the center of the table, a pile of tokens representing four Actions, and a large stack of cards.

All of the components are BEAUTIFUL. The illustrations, based on Da Vinci’s “Vitruvian Man,” give the game a sense of highbrow dignity. The wooden pieces and cardboard tokens are sturdy. The icons on the tokens and cards look classy and are easy to read. My only complaint is that the cards are bigger than they need to be, and each player needs a LOT of real estate on the tabletop. Still, these are among the nicest components I’ve seen.

This is where the game starts to fall short. First of all, the diverse array of artistic and scientific talents expected of a real-life Renaissance Man is boiled down to just four professions. The jobs (and related skills) are: Baker (Barter), Merchant (Hire), Knight (Recruit), and Scholar (Teach). These Actions are just ways of getting other cards into play (i.e. getting new workers to work for you). Also, note that the sciences and fine arts are not represented at all. Baking bread to barter with Knights isn’t as cool as inventing FLYING MACHINES, but whatevs.

The fifth type of card is the Renaissance Man himself. He acts as a wild card, which can be played on top of any other cards without having to match those cards’ icons. However, once played, the Renaissance Man is the only card that provides NO ACTION OF ITS OWN. He is a jack of all trades, master of none.

Typically, a game will offer the player more options as it progresses. RENAISSANCE MAN is the opposite. When you start the game, all four Actions are available to you, but when you start covering up cards on the bottom row, you can no longer use the Actions on the partially-covered cards. You actually have FEWER options as the game goes on. This opens up the possibility that you will block yourself and be unable to make a valid move.

That situation leads to another unique mechanic: you are allowed to remove from your pyramid any cards you played previously in order to free up more Actions underneath. In other games, when you paint yourself into a corner, you have an alternate exit route other than UNDOING YOUR OWN PROGRESS. This was an audacious move on the part of the designer, but I see it as a sign of poor design.

I’m sorry to say that RENAISSANCE MAN is more frustrating than fun. I found it totally annoying whenever I got stuck and had to undo my own moves. Making forward progress feels less like “enjoyment” and more like the relief you get for avoiding an unpleasant experience, such as going to the dentist and finding out you DON’T need to get that root canal after all.

Another irritating situation is the limited usefulness of the Recruit action. To pull off this move requires you to wait for multiple elements to be in place, many of which you have little control over. First, you have to have the Recruit Action available, which is less likely the later you are in the game. Then, there must be a card on the Recruit board that you can play onto your pyramid. Finally, you have to be able to discard a card from your hand whose icon matches an arbitrary icon on the Recruit board. Getting all three pieces into place is a RARE OCCURRENCE, making the Recruit Action ineffective. It is possible you will pass several turns in a row, taking no Actions and discarding your entire hand each time, hoping to draw the card you need to pull off this combo.

I really wanted to like RENAISSANCE MAN, but the best thing about it is the artwork. There are a lot of potentially interesting elements here, but they don’t come together to form a positive experience for me and my gaming group.

Despite my complaints, I do think RENAISSANCE MAN will appeal to a certain type of gamer: those who enjoy solitaire puzzle games. Success requires patience and the ability to plan several moves in advance. The rules include a solo variant, and it plays almost exactly like the multi-player game. The major difference is the phantom player rule, which actually makes the Recruit Action more viable in some situations.

RENAISSANCE MAN has a promising premise, and it looks lovely, but the execution is lacking. Fans of solitaire puzzlers may enjoy this, but for everyone else, I cannot recommend it.