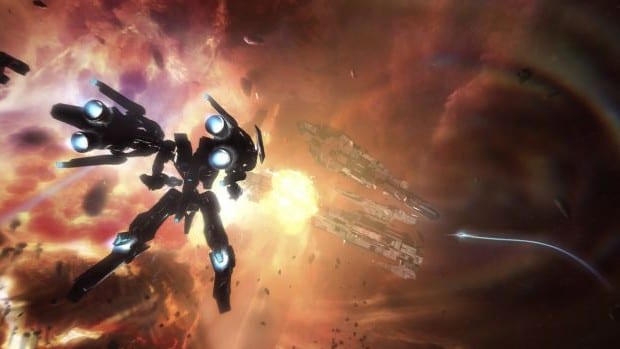 I’m thirteen years old, sitting in my pajamas at my dad’s computer, my hands clutching a cheap, twenty dollar flight-stick I bought at Target. I maneuver my X-Wing through the morass of combat. I reconfigure my shields to my engines and blasters, so as to overpower the enemy within my grasp. I squeeze the trigger with all of my might. The monitor flashes bright red and white. Another TIE Fighter down. I grin with confidence.

Just when I think everything is going peachy, Star Destroyers warp in, and I’m swarmed by the massive Empire fleet. My smile turns to a frown as my X-Wing is quickly shredded to pieces. I pound my fist on the desk and begrudgingly restart the mission, assuring myself that this time would be different.

This exact memory rushed through my head the entire time I was playing Strike Suit Zero.

As I was playing, all of the love I’d had for those ’90s era space flight shooters – like Colony Wars, X-Wing, and Wing Commander – came flooding back. The intensity of dozens of fighters performing a zero-gravity ballet of bullets and blasters; the feeling of victory when I finally took out that giant cruiser; even the crushing frustration of having to repeat a mission over and over again because I kept getting destroyed; Strike Suit Zero perfectly emulates all of these feelings, yet the few additions it does bring save it from becoming a genre cliché.

[singlepic id=10416 w=320 h=240 float=left]Players step into the shoes of faceless soldier Lieutenant Adams, recently reinstated after disobeying orders. After a brief training section to get Adams back on his feet, he quickly discovers a plot by the evil, faceless colonial fleet to destroy earth, and it’s up to the few capital ships and fighters left in Earth’s fleet to take them down. The plot honestly does nothing more than set up a shoestring thread to tie each of the various missions together, and nothing really important happens until Adams receives a massive info dump within the last mission, which loses all resonance due to the poor handling of the plot up to that point. It’s kind of sad, because Born Ready Games clearly developed quite a bit of back story, but it just isn’t delivered all that well. Luckily, the action more than makes up for the lack of emotional impact the story tries to muster.

Anyone who has spent any amount of time with games like X-Wing Vs. TIE-Fighter will be right at home. Players command one of several different space craft, and fly around one of the thirteen gorgeously detailed levels, firing lasers and missiles at everything from small fighters and hulking capital ships to giant space stations. As always, there’s a bit of strategy involved in managing speed (hitting the brakes is good for keeping the enemy in your sights) and utilizing the right weaponry (machine guns shred through shields while lasers are good for whittling down armor), and battles revolve around making sure weapons are rotated out constantly. While this sounds like it could get tedious and old after a while, Strike Suit Zero throws in a nice little anime-styled twist to keep things interesting.

[singlepic id=10417 w=320 h=240 float=right]After the first few missions tooling around in more “conventional” space craft (as conventional as non-existent, futuristic space craft can be), players receive the titular Strike Suit Zero. While in the suit, destroying enemies while zipping around builds up a meter which will let the Strike Suit transform into a giant mech. Controls change drastically as the suit can now lock on to enemies and unleash salvos of missiles and gunfire. While speed is drastically reduced, the suit can easily dodge incoming attacks and cause massive damage as long as that meter doesn’t run out. The transforming mech adds a whole different layer of strategy to taking on the swaths of enemy fighters thown out, and that moment when Adams first gets his hands on the transforming mech – complete with Homeworld meets J-Pop theme song – is exhilarating.

While Strike Suit Zero harkens back to some of the greatest moments of ’90s era space sims, it also brings with it some of the worst parts of those games – namely, the difficulty curve. Players who try to just go through each of the campaign levels in progressive order are in for a rude awakening. as the game virtually requires replaying through previous levels. Completion of each level rewards the player with new guns and missiles, and taking care of optional objectives will upgrade shield strength, armor, and fighter performance. These upgrades make a huge difference, and I had to replay several older levels with my upgraded fighter to unlock other upgrades just to have a chance on the later levels.

[singlepic id=10418 w=320 h=240 float=left]Further exacerbating the difficulty level is the game’s use of checkpoints – or lack thereof. Not only are each of the missions – especially the later ones – filled with dozens of heavy fighters and massive cruisers that can rip through the suit like tissue paper, mid-mission checkpoints are placed too far apart, usually dropping the player several minutes before that huge fleet of ships warped in and ruined everything. Born Ready Studios is looking into fixing the frequency of checkpoints, but as it stands, some missions will take quite a bit of frustration to fight through.

But despite all of that, I never felt like I was grinding my teeth just to fight through the game and finish this review. Each challenge I faced was met with steel resolve to break through that barrier, and each hard won victory was well deserved. Any minor complaint is overshadowed by everything Strike Suit Zero does right. But the best part of it was reminding me how good these space sims were, and how good they can be. If my thirteen-year-old self had found this game, he would have had his eyes glued his computer monitor for days.