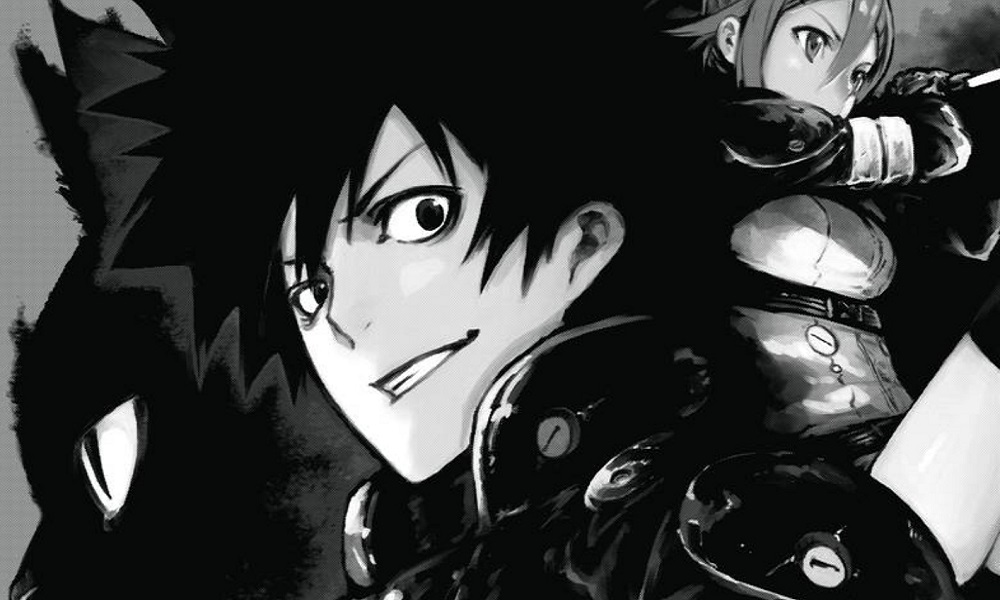 It’s very strange to read two similar series so close to each other: While I did enjoy Demon Slayer: Kimetsu no Yaiba for what it’s worth, I was a bit disappointed that it was sloppily reliant on overused Shonen tropes. However, I noted that returning to tried and true formulas isn’t necessarily a bad thing, and done properly, can be a return to form and a refreshing read. The first volume of Black Torch seems to be the answer to my concerns, providing a solid debut with some great characters and interesting premise.

Jiro Azuma is your average protagonist, a hot-blooded youth that has the urge to help everyone and everything he meets. He has the special ability of talking to animals, which drives him to do some reckless things; that being said, he’s a descendant of a long line of ninja, which means he has training in some powerful techniques, even if he isn’t interested in the old-fashioned traditions like his grandfather. One day, he helps a mysterious black cat and nurses it back to health, only to find out a terrible secret: The cat’s name is Rago, and he’s a Mononoke (A demon-like creature). Rago’s on the run from other Mononoke as well as the Bureau of Espionage, who want him for some undisclosed purposes. After Jiro unsuccessfully defends Rago from a raging Mononoke and nearly dies, the two fuse together as Jiro is caught in a world he never wanted to be in.

Instantly, I felt I was reading a plot synopsis for Boruto, Yu Yu Hakusho, Buso Renkin, and Tokyo Ghoul with the borrowed elements from all of those series. However, Black Torch makes it work oddly well, and meshes the modern day ninja theme into the demon-slaying plot pretty well. By the end of the volume, Jiro reluctantly joins the Bureau of Espionage as his ninja roots and Mononoke-infused powers are the perfect mix to destroy the other demons, and his bond with Rago acts as a second life. While there are some parts that can feel rather derivative, Black Torch nails the landing by creating a different identity for itself through its fast-paced action and characters.

I ragged on Demon Slayer’s inconsistent tone for being funny and horrific at the wrong times, but in Black Torch, the action-comedy tone fits with the modern setting of the manga. There are some rather gruesome parts during specific fights (hence how this feels reminiscent to Tokyo Ghoul), but they’re always punctuated with some witty banter between Jiro and Rago. The two have this weird synergy that complements both of their personalities, and it feels like a traditional buddy-cop dynamic.

Jiro is the impulsive hothead that wants to help everyone no matter what, while Rago is the self-serving straight man who is astonished at Jiro’s antics and loud mouth. It’s a charming friendship that is genuine and has a lot of room to develop in the next few volumes, and I’m all for it. I enjoyed Jiro’s resolve to help, even if it did mean he was demon food within the first chapter. Being somewhat proficient in his ninja upbringing was a bonus as well, since we didn’t have to go through yet another montage of the main character training to lose their incompetence.

The supporting cast is entertaining to read as well. We’re introduced to two members of the Bureau of Espionage, mainly Ichika Kishimonji, a cold and calculating individual who hates all Mononoke. Naturally, this creates friction between her and Jiro, as she denies the latter’s humanity since he bonded with a demonic creature, and hence has given up his humanity. She does warm up to him, and there’s room for this relationship to grow, but the first volume shows how cool she can be in battle.

As for the art style and action, it’s a little rougher than other series, with action scenes taking a sketchy style. I feel like it’s a stylistic choice, and it works for the faster battles, such as Jiro and his grandpa in the second chapter. Some of the lettering feels a bit off outside of the bubbles, but it’s only a minor quibble that can be fixed in the localization of future volumes. Other than that, it’s a solid Shonen series with some spectacular action sequences. I did like how the animal speech bubbles had a different font than the humans to distinguish who was talking, so that was a nice touch. All in all, it was an enjoyable read that I couldn’t put down, and I’m excited to see where Jiro leads the group that will be known as Black Torch.

Black Torch is a surprisingly entertaining debut that seemingly came out of nowhere. With an intriguing setup, some cool characters, and nice action scenes, this is one Shonen manga that you need to keep an eye out for in the coming months.

Elisha Deogracias is an aspiring accountant by day, freelance writer by night. Before writing for Gaming Trend, he had a small gig on the now defunct Examiner. When not being a third wheel with his best friends on dates or yearning for some closure on Pushing Daisies, he's busy catching up on shonen manga and wacky rhythm games. Mains R.O.B. in Smash. Still doesn't know if he's a kid or a squid.
Related Articles: Beyond the Page, Black Torch Volume 1
Share
Tweet
Share
Submit