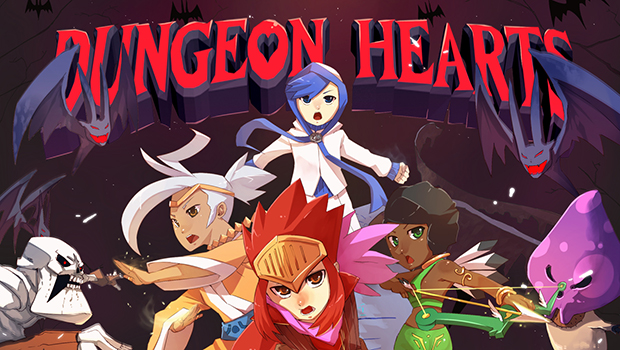 Puzzle games love playing dress up, it’s nothing new. You see ’em acting as fighting games like in Super Puzzle Fighter, or even plot driven romance dramas as in last year’s surprise hit, Catherine. It’s multitasking for the modern gamer who prefers some back story with their Tetris because, honestly, who has the time to play two games separately anymore?  Dungeon Hearts, the new title from Devolver Digital and Cube Roots, admirably attempts to merge the worlds of puzzle and RPG. While it does deliver what it promises in some aspects, it ultimately fails to capture either genre in a satisfying way. What we’re left with is a mediocre puzzle title with some RPG elements dancing in the background.

The Story is vaguely described as:

Four spirits race across the land, burdened with tragedy. Within each lies the specter of guilt and fear, which The Dark One bends to his will to enact his resurrection. They realize the deception too late as the promise of salvation turns to betrayal. A black wind washes over the planes, turning all to ash. As the fallen heroes face the engulfing void, a spark of hope clings to life. When the demon peered into their hearts to learn their secrets, so too did they learn his…

[singlepic id=11353 w=320 h=240 float=left] There really isn’t any story to speak of inside the game. There are hints of a story, but they all point you towards something that doesn’t exist. There’s a library of information accessible from the main menu that delves into the lives of the heroes and enemies. So, just in case you were wondering, the red guy on the side of the screen is actually named Brand and he’s breaking his vow to give up the sword to stop the evil one. And the green lady is Telina, the last of her tribe who is charged with ending the dark one’s curse. None of this information is relevant to the game. It just hangs there for curiosity’s sake. It would be different if the game offered cutscenes or any form of structured style of progression. But as it is, the back story is merely tacked on, adding noise and confusion. I can’t help but feel like I’m only getting a piece of a finished game. It’s like they chopped the battle system from a complete RPG with maps, quests and stories and then packaged it as if it were its own separate title. Imagine playing a Final Fantasy game where all you do is fight in battles and you’ll get the idea. I don’t even know why it’s called Dungeon Hearts, there isn’t a dungeon in here. It’s possible I’m being too hard on the game, but I think they are misrepresenting this as a much deeper game than it actually is.

Granted, the battle system is intricate enough for hours of playing. It only took me ten minutes to figure out the basic match-three mechanics that carried me through the first intro battles. But even after clocking hours of game time, I’ve still barely scratched the surface of this game’s complex system. There’s enough for a college course on the subject, but I’ll do my best to summarize. You have four heroes, each with their own color and matching charger runes on scrolling rows called the fatestream (Think Guitar Hero turned on its side). There’s a red fighter, a yellow mage, a blue healer and a green archer. As the different colored runes run alongside the four lines, you can click and move them to create matching pairs of three which then combine into a diamond-shaped strikers. Clicking the strikers executes an attack from the matching color’s character. The enemy also has his own strikers that attack when they reach your left side of the screen. You stop the enemy’s attack by activating your strikers on the same row or column as the enemy strikers. Okay, still with me? Each matching charger on adjacent rows or columns will multiply the strength of the hero’s attack. And the more hero colors adjacent to each attack, the more the attack will further multiply.[singlepic id=11354 w=320 h=240 float=right]

Immediately after defeating an enemy you’re taken into a quick mini game where you match three stars to level up your characters,  increasing health, strength and unlocking skills. If you mess this part up you might as well hit reset because you’ll end up being completely outmatched when the difficulty picks up. Different hero skills are unlocked when you reach the necessary levels indicated on the bottom of the screen. These revive spells and special attacks are activated by filling your energy bar and clicking them when ready.

But wait, there’s more! Besides basic attacks, there are also “Advanced runes”  such as enemy hexes that will further hinder your hero if they reach the left side. These hexes range from health snatching poison to blinding spells that cause heroes to miss attacks. There are thirteen different hexes, each with their own ailments. Things are further complicated by obstacles like square shaped chargers that you can’t move and armored enemy strikers that require multiple hits or matching colored attacks in order for your to break them. It’s a lot to keep track of when you’re trying your best to match colors on various rows that increase in speed while stopping enemy attacks from lowering the health of your heroes.

And that brings me to another gripe I have with this game. The difficulty is out of whack.  The fact that there are only two difficulty settings between normal and hard doesn’t help much either. Either I’m just stupid (not out of the question) or this game is just too hard. Neither prospect really keeps me wanting to play. Unless, you’re some kind of Professor Xavier/Garry Kasparov hybrid, the scrolling speed becomes too fast to think of more than just “Matching three colors, gotta match three colors, need to match three colors.” I’m partially aware that the characters are attacking on the side and it has something to do with the placement of my diamonds, but it’s hard enough just to keep matching threes at the increasingly frantic pace. It’s unforgiving. If you miss just one step, the attacks and hexes pile up and you have no hope of escape.

[singlepic id=11355 w=320 h=240 float=left]This problem is further compounded by cumbersome mouse controls. I’m playing the STEAM version available for Mac/PC but there’s also one for iPAD. After missing clicks and failing to keep up with the intense scroll speed,  it has become painfully clear to me that this game was designed with a touchscreen in mind. Moving and clicking a mouse simply can’t hold a candle to the speed and control of finger-tapping. It never quite feels right, almost like playing Guitar Hero with an NES controller.

The game also suffers by not having an adequate save system or any way to maintain your character progress. One of the most satisfying thrills in any RPG is leveling up characters until they can swat away the same foes that  previously were so difficult. It’s a progressional reward system for all your hours of play and it also provides you with a sense of ownership of the characters. But in this game each time you die your characters must restart at level one. And there’s nothing worse than spending half an hour at peak performance only to lose all your progress and start from the beginning. There is a save and quit option so you can resume your game at a later time, but you only get that one save slot and it’s lost after you use it. Each game is a one shot run to the finish. Once you start, you’re on a marathon that only ends when you drop dead or if you somehow make it to the boss (I never came close). That means no level breaks or cutscenes after defeating an enemy. What you get is a quick sequence for leveling up your character that involves more fast scrolling items that you match three of to upgrade a character, followed by the next fight. It literally does not stop.  Losing all that time and effort is disheartening and it’s difficult to jump back in with enthusiasm for another round.

Long story short, Dungeon Hearts is a viciously difficult match-three puzzle game that loosely resembles RPG battle mechanics. And while it hints at other RPG elements such as questing, leveling up, and story progression, it does not truly offer them in any real way. The battle system is overly complex, the controls are obviously designed for the iPAD,  and the inability to save progression greatly diminishes replayability. It is currently being offered for 2.99 on the App Store and STEAM, however it is difficult to recommend this title with so many more polished and cheaper options available. So in the case of this game, the sum is not greater than its parts. You’ll still be having more fun playing Final Fantasy and Bejeweled one game at a time.