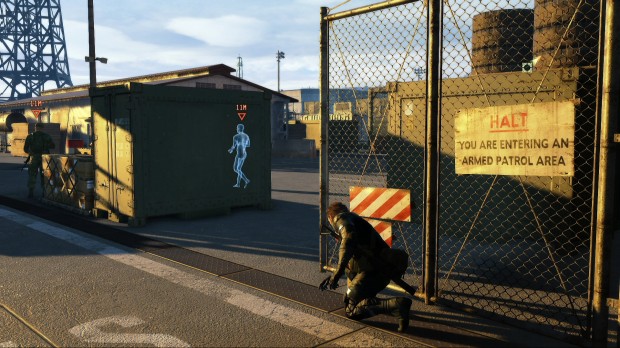 Created so expertly by the masterful Hideo Kojima, the Metal Gear Solid franchise has formed a unique persona. It is a persona that leads you to thinking of overwrought cutscenes that last much longer than they probably should, intense stealth gameplay, and an alert noise that we will never be able to pry itself out of our minds. Metal Gear Solid IV: Guns of the Patriots felt like a wonderful conclusion to the franchise, though we all knew it would come back eventually. In its comeback, we also knew some things had to change; it could not be the same experience wrapped in prettier visuals. Leave it to Kojima to expertly balance the fine line between changing too much and changing just enough, which he does in his latest stealth adventure, Metal Gear Solid V: Ground Zeroes.

The biggest hubbub regarding the latest installment in the Metal Gear franchise, Metal Gear Solid V: Ground Zeroes, is all centered on its length. The main mission in Ground Zeroes can be completed within 30 minutes, with my first playthrough hitting around 2 hours after roaming around the large environment and looking for side activities to explore. The missions itself is nothing special, although it does give you a great prologue to the events that will take place in Metal Gear Solid V. You begin as Snake, voiced by Kiefer Sutherland, and are sent out to rescue two people being held captive by the villainous XOF group. Once your objectives are complete and you bounce out of that location, you are given a hefty cutscene that introduces you to a few characters you will see in Metal Gear Solid V: The Phantom Pain.

The wide-open nature of the location you are placed within helps add replay value, which only increases based upon your curiosity in the Metal Gear Solid world. There are multiple small things located within Ground Zeroes’ main campaign that, while not particularly exhilarating, still provide a bit of fun when found. These small things range from basic collectables to other prisoners that you can rescue as well as the two that are required. Alongside the main mission are six side activities to keep your attention. These activities focus on performing one specific task assigned to you at the beginning of the mission. Activities are mostly predictable, such as eliminate certain targets, retrieve this data, etc. but they provide enough of a challenge to keep your attention. Then again, the main thing keeping your attention may be the refined mechanics introduced in Metal Gear Rising V: Ground Zeroes that keeps it feeling as fresh as ever.

With this being the PS3 version of Metal Gear Solid V: Ground Zeroes, the graphical expectations are a bit lower than one would anticipate in the Xbox One and PS4 releases of the game. Ground Zeroes hits those expectations, but definitely does not exceed them. The frame rate can get very inconsistent in the rain (which is happening throughout the entire main mission) and some textures look as muddy as the ground you are walking on. The character models and art both impress, but it is clear that the previous generation hardware is really holding the game back from achieving its full beauty.

Another large story coming into Metal Gear Solid V: Ground Zeroes’ release was the replacement of David Hayter as the voice of Snake. As previously mentioned, he was replaced by Kiefer Sutherland, a star mostly known for his work on 24. Sutherland provides an admirable performance but he fails to capture to the right gravelly voice that David Hayter perfected in the previous games. While it is far from a deal-breaker, the different voice on Snake is a bit jarring in the beginning.

With the release of Metal Gear Solid IV: Guns of the Patriots, it was clear that the game was leaning a little less on the stealth mechanics than games previously released in the franchise were. That deviation has continued slightly into Ground Zeroes. Gone is the nice little box you can hide in and the ability to knock on walls to attract enemies. But one of the biggest signs of a trend toward action is not what Kojima Productions removed, but rather what they added in the ability to take out an enemy within the first few seconds of him catching you. When you are seen by a baddy, time slows down and you have a few seconds to eliminate them, which will in turn not alert the surrounding enemies to your presence. Unless, of course, the enemies see you take the shot in which case your best bet is to get the hell out of there. This is an innovation that feels like it should have been implemented a few games ago. It adds a flow that keeps the game moving more swiftly than in previous installments. It is also tremendously helpful in some hairy situations.

This is not the only addition to the gameplay as you can now drive vehicles located within the environment. These vehicles actually control fairly well, and can lead to some pretty grisly deaths for XOF agents opposing you. There’s also an AA gun Snake can man, but that seems like something you would only use if you find yourself in a very bad position, though it’s accessible whenever you need it. Among the small inclusions are the little stat tracker pop-ups that inform you of small things like longest headshot, furthest enemy sent flying (through grenade, truck, etc.), among other things It is a small inclusion but it is still fun to see some dumb little stats pop up occasionally, even if they are meaningless in the grand scheme of things.

The status of Metal Gear Solid V: Ground Zeroes was mostly unknown leading up to a week or so before launch. But its existence has been well defined since then, it is clear that Ground Zeroes is just a prologue for the forthcoming full game Metal Gear Solid V: Phantom Pain. The biggest question here revolves around if Ground Zeroes is worth the $19.99 ($29.99 for Xbox One and PS4) price tag. Despite a few setbacks, it brings in some innovative mechanics, a re-playable main mission, and fun side activities, all of which combine together to make one hell of an experience. It may be a prologue, but it’s a damn good one.