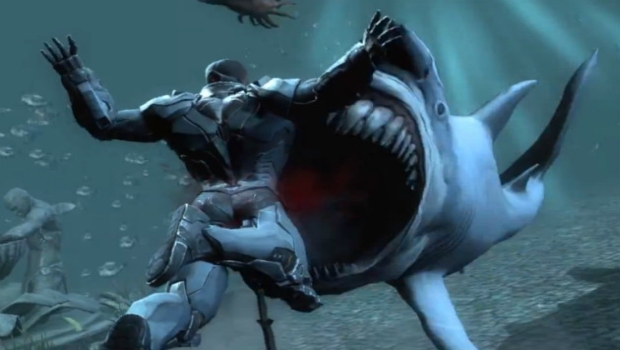 People are fawning over the return of Killer Instinct for the next-gen launch, but it’s not Fullgore that has me excited for the fighting genre – it’s Batman. It’s Green Arrow, it’s Harley Quinn and the Joker, it’s Wonder Woman, and it’s Superman – it’s Injustice: Gods Among Us Ultimate Edition that represents the next-gen fighter game to me. A true slice of fan service, the original title earned high marks from me back in April of this year, citing fantastic graphics, rock-solid controls, and an accessible gameplay style unseen in any fighting game I’d seen before it. NetherRealm Studios turns over the reins to High Voltage Software (they handled the PC port of the game) to pull it over to the PlayStation 4. It’s time once again for a “Clash of the Titans” – let’s dig into the true Ultimate Edition of Injustice: Gods Among Us.

First and most noticeably, Injustice: Gods Among Us Ultimate Edition (hereafter just referred to as Injustice) has made extensive use of the power of the PlayStation 4. The game now operates at 1080p and 60 frames per second. The previous versions they ran at 720p and 60 frames per second. What difference does it make? Well, since the original ran at 60 frames per second on current-gen, the resolution serves to smooth out animation a bit. Everything seems to move with renewed fluidity, and super-moves look even more spectacular than before. High Voltage Software had already tackled both the resolution and framerate challenge on the PC version of the game, so it wasn’t a surprise to see both make the seamless transition to the PS4 platform.

If there is one area that does suffer a bit in the move to a higher-resolution, it’s the occasional cutscene during single player. These seem to be largely untouched and upsampled, making any imperfections such as stiff animations seem even more out of place compared to the now-sharper gameplay.

The PlayStation 4’s Dual Shock 4 controller has a touchpad / button in the center of it, so naturally High Voltage wanted to take advantage of that. Throughout the campaign and S.T.A.R. lab portions are mini-games such as destroying incoming meteors that Superman is throwing your way or dodging incoming fire from The Joker. The touchpad controls offer an alternate method of tackling these, providing a change in pace. You can still use the standard buttons if you’d like, but I’d encourage you to at least try out the new mechanic.

Like Call of Duty: Ghosts and Assassin’s Creed IV Black Flag, if you own the game on PlayStation 3 you can upgrade to the PlayStation 4 digital download version for just $10. The hitch is that it has to be the right version of the game. If you’ve purchased the regular edition of the game, you are out of luck, but if you have the Ultimate Edition you are given the green light. No word on when or if that upgrade path will expire, but it’s nice if you are holding off on the leap to PlayStation 4.

One of the coolest features on the PlayStation 4 version of Injustice doesn’t actually come courtesy of NetherRealm or High Voltage, but Sony themselves. The share button is perfectly suited to fighting games as you never know when something truly awesome will happen. The ability to upload and share an epic scrap with your friends is a great and unanticipated upgrade to the game.

This Ultimate Edition reminds me of other WBIE products like the Batman: Arkham City and Batman: Arkham Asylum Game of the Year editions that came out in about the same timeframe. Since NetherRealm has confirmed that there will be no additional downloadable content for the title, it truly is the definitive version. I’ll let my original review go over the mechanics and storyline and let this review stand supplemental to that one.

The PlayStation 4 and Xbox One launch has been pretty successful, but the PlayStation 4 suffers from a gap in the initial lineup - a solid fighting game. Injustice: Gods Among Us Ultimate Edition fills that gap nicely, delivering all of the previously available DLC and a staggering number of challenges to tackle for this new generation. While it doesn’t knock your socks off graphically like you might expect for a ‘next-gen’ title, the extremely-accessible fighting mechanics make this title a must-have.