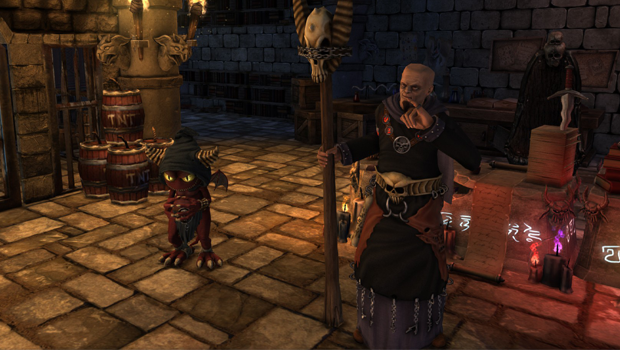 Ever since I was a wee gaming larvae, I’ve had a thing for games that let me play the role of the villain rather than the hero. I still fondly remember setting devious traps for would-be heroes in Tecmo’s Deception, I was a gleeful overlord of the demonic in Dungeon Keeper (which Impire very obviously apes), and frankly, I’ve even found ways to turn The Sims and SimCity into very sinister games indeed. With my particular brand of gaming sociopathy owned up to, you could probably understand why one glance at Cyanide Montreal’s Impire would make my eyes light up and put a nasty little grin on my face. The screenshots scream ‘Dungeon Keeper, but not over a decade old!’, which works as a kind of siren song for me. The problem with a siren song is that sometimes you go to a watery grave beside some Roseanne Barr-looking ocean monstrosity – or, in this case, a real-time strategy game which feels less like a modern spin on a classic title and more like a mediocre knock-off of one.

Really, I knew there was going to be a problem once I realized that the little imp-demon gracing the screenshots wasn’t some incidental worker-creature in Impire. Instead, though that form may be temporary, that would be the major character of the game – a demon plucked from the bowels of hell by an incompetent warlock, having to regain his previous glory by accumulating power over time. The problem is, once you have a short, cranky looking creature like that taking the spotlight in a game, you know the developers have decided to walk the comedy route in their writing – and if the dialogue didn’t hit the mark, this wasn’t going to be a game I could explore or experiment with; instead, it would be a game that I would have to (with a stony-faced, unamused stare) just plain endure. Score a point for cynicism in this case – right from the start, Impire tries its hand at comedy. Iffy, mediocre, somewhat bland comedy that not only grated on the nerves, but had the effect of making Impire feel less like a game where I was playing a grim and powerful warlock, and more like a day in the life of Gargamel. Not exactly what I was hoping for.[singlepic id=10908 w=320 h=240 float=left]

I did like the general visual presentation of Impire. Nothing supremely amazing, but it’s appropriately dark and dank in terms of environments, and the comedy starts to become appropriately subtle on that level – the usual gross-out comedy of the big cauldron of blood and large, cartoony femurs sticking out of the broth in the kitchen area. The various creatures I acquired to do my bidding also looked adequate for the roles they were supposed to be playing, with no real big surprises or glaring faults to speak of. In fact, aside from the pretty off-putting, awkward comedy – ‘average’ sums up pretty much every aspect of Impire’s presentation. The story and comedy failings aside, there just wasn’t much here that rattled me so much that I had to criticize it, or seem so great that I couldn’t let it pass without comment. There is your treasure room, laden with the gold you would expect from such a thing. There is your little gobliny soldier minion, who does indeed come armed with a weapon and who looks exactly like the demonic speed-bump he is. And so on, and so on.[singlepic id=10909 w=320 h=240 float=right]

Now, the minions and rooms may be serviceable, but really… the interface in Impire has problems. Most of the game is spent in a top-down view overlooking the various passages and areas you’ve constructed as you complete objectives, fight off invaders, expand your underground lair and launch attacks on the surface, and far too often I found myself grumbling at non-responsive controls, sluggish scrolling or generally irritating layout choices. Impire seems to strongly encourage you to micro-manage group fights, having your creatures focus fire on the opposing party’s cleric or the like, but it doesn’t really give you the tools to do this smoothly. Worse, some of the fights in Impire seem almost purposefully designed to frustrate the player – like the first real boss fight, where you have to have your sluggish minions beat down a big-bad who could stomp his way over to tables filled with food and, if you didn’t destroy it before he arrived, he would instantly recover all of his health. When I understand the strategy the enemy is using, understand what I need to do to defeat him, but find myself unable to cleanly react the way I need to due to klutzy controls, my patience starts to wear thin quickly. Still, for the most part I was able to work around the failings of the interface and continue on with the adventure, rather than feeling as if I hit a wall where it would be painful to keep going forward.[singlepic id=10910 w=320 h=240 float=left]

Despite the occasional points of awkwardness in the interface and the eye-rolling attempts at humor, Impire ultimately isn’t a bad game – and it isn’t a great one either. That’s the most surprising thing of all. It’s one thing to make an average game, but Impire was clearly a game modeled after Dungeon Keeper – not only a successful game, but a successful game that is over a decade old. If Impire had simply matched what Dungeon Keeper originally presented to gamers, it would have been a true and great success, even if unoriginal. Instead, the resulting product feels like a title that’s just original enough to add flaws to the formula, resulting in a strictly B-minus game. Pick this one up from Steam if you’re truly desperate for another attempt at playing the role of an evil dungeon overlord. If you’re waiting for a great game in that genre, however, pass this one by.