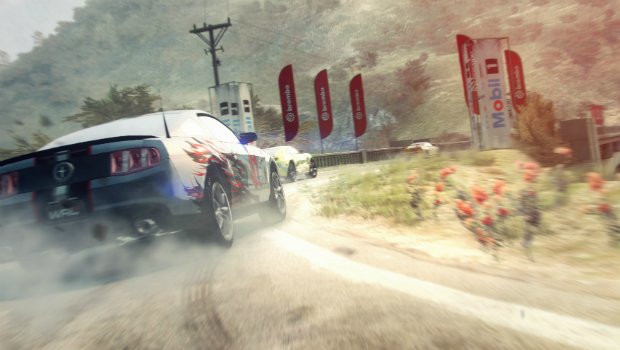 Racing is all about power, speed, control, and spicy locales in which to show off those attributes in front of thousands of screaming fans.  GRID 2, the sequel to Codemasters’ Race Driver: GRID, delivers on all of those key elements that make racing games so fun and enticing, even after all these years of basically unchanged gameplay.

[singlepic id=13713 w=320 h=240 float=left]As opposed to the bulk of racing titles, which simply allow you to pick up in various races and earn money, experience, or the like without much linear direction, GRID 2 plays through a storyline that takes the player from lowly Youtube click-getter to international racing megastar.  After placing high in a race in Chicago, Patrick Callahan, a mogul with interest in starting a massive World Series of Racing, contacts the player to be the poster-boy of the new racing league.  What follows is a series of races around the country, placing the driver in other league races to impress potential fans and drivers into defecting to your upcoming racing league.

As the player continues to win races and amass fans, the stakes go international, and the league grows from a small dream in the back of the mind of a rich guy into a worldwide phenomena noticed by fans, sponsors, and even the big fish over at ESPN’s Sportscenter.  Much of this story is kind of unrealistically fast and ideal, but remains fun and doesn’t overpower the situation.  A lack of vehicle customization both speeds the game up and takes away from a the total experience.  While paint jobs and designs can be changed, the cars come souped up to their maximum level in the one-player mode, though there are some customization options in online multiplayer.

[singlepic id=13714 w=320 h=240 float=right]It is in the races themselves, however, that Codemasters really makes their voices heard and their wallets thicker.  GRID 2 has one of the best in-race dynamics that this reviewer has ever had the opportunity to play.  The control in the corners is thick with challenging realism that pushes even veteran racing simulation fans to the brink.  Speed remains the most important attribute but is no longer the defining attribute of what makes a winning car.  The control and acceleration attributes are more important than ever, helping to balance out the playing field with ofter faster competition.  Often close racing can become an issue, and the traction of the other cars seems to be infinitely better than yours.  It’s very easy to get sucked up behind a slower vehicle, and then afterwards very difficult to detach from it’s backend.  When these problems surface, the races can become very infuriating.  That said, many of the races run with no issues whatsoever, and are easily more fun than frustrating.

[singlepic id=13716 w=320 h=240 float=left]Perhaps the most impressive part of the races are the collisions.  Whether slamming your car against a overtaking opponent or into the tire barricade in the 5th turn, the damage is very area specific and looks great.  In a race, the driver ahead of me moved in front of me as I was catching speed, and the resulting crash spun me out into the wall.  Playing it up for dramatic effect, the car spun about a half dozen times before coming to a rest.  The damage to the car was evident in both visual destruction and poor handling and performance of the engine, as well as to the barricade walls.  Various pieces of my ripped car lay on the road at the scene.  In other races, the damage done (say, from hitting a redwood tree at 150mph) caused the car to completely shut down.  Fortunately, GRID’s signature function, the Flashback, allows you to rewind the race to a more suitable spot, giving you the chance to relive and retry a dangerous curve or drift.

There is a huge selection of race types outside of the basic race, the simplest being the classic checkpoint or power lap runs.  There are various other types, such as overtake or touge races, that challenge the drivers in creative ways.  Overtake races take place between two drivers, seeing how many pace trucks in a row can be passed without collision.  A touge race is a speed control run against another driver, with strict impact rules and difficult winning conditions.  These and various other race types, like Eliminator and Time Attack races, give players a nice selection of racing experiences and challenges.

[singlepic id=13717 w=320 h=240 float=right]GRID 2 features tracks in various U.S. and international cities, including Miami, Barcelona, and Tokyo.  Each city is highly detailed, and does a fantastic job of capturing the style and feel of the individual places.  Miami’s streets are colorful, with neon painted surf-shops and bodegas, while Chicago is a labyrinth of high rising, powerful buildings.  As you progress through the game, more and more cities become available as you take the World Series of Racing to exotic places.  Each new city is a pleasing and exciting part of the game.  However, unlike the Gran Turismo series, there is a real lack of interesting, different, and world-famous racing tracks and courses.  The game is highly dependent on road-racing, and that takes away from making a truly all-encompassing experience.

Taking GRID 2 online allows for versus races against friends and strangers from all around the world.  The races seem to flow well and do not suffer from lag issues.  During live races, the new LiveRoutes will change the direction of turns in-race as well as race to race, keeping tracks fresh.  This is a great implementation that helps cure some of the monotony of racing track after track.  If racing against others isn’t the ticket, GRID 2 also offers a series of Global Challenges, pitting you against everyone else for supremacy on weekly leaderboards.

[singlepic id=13716 w=320 h=240 float=left]Perhaps the only downfall of GRID 2 is the ambiance of the pre-race, post-race, and main menu screens.  The screens are repetitive and boring, often suffer from lag, and go quickly from annoying to downright maddening after playing for a few hours.  Before, during, and after races, a cheery suburbanite frat douche keeps giving you spotter advice as well as encouragement, and the pain of his voice and demeanor is just short of having my spine ripped out through my neck.  On the flip side, the in-race ambiance (aside from the spotter) is really fantastic, with cheering fans, revving engines on sideline showcars, great engine noises, and tire bumps on uneven surfaces that sound so realistic and well-placed, it goes almost unnoticed. Perhaps the most uncomfortable thing about the game is the Disney-style trash talk and interactions that come with a game rated E for Everyone.  While it’s smart to allow the game to be playable by all, the grittiness and dirty language of hardened street racers is something that would make make interactions less manufactured and insincere.

GRID 2 is a really fun game that can become a long-time favorite for casual fans and racing fanatics alike.  It’s story is accessible and rewarding, the races are varied and challenging, and the overall experience is positive.  Aside from a few missteps in track selection and ambiance, GRID 2 firmly establishes Codemasters as one of the premier racing game developers around today.