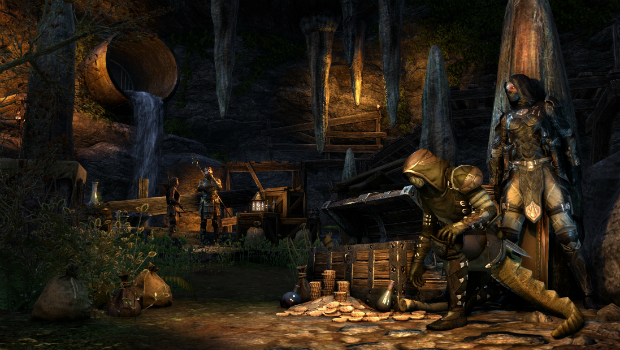 Of all the cool things that have been possible in the Elder Scrolls world, stealthy entry and blatant theft has always been one of the most useful and entertaining.  Taking from others to give to someone else, for a tad bit of gold of course, has always satisfied when done freelance or as part of the Thieves Guild.  That’s why I always felt it was an egregious deletion from the world of Elder Scrolls Online, a game that for so long has marginalized thievery down to basically nothing.

No more, with the newest expansion, as the Thieves Guild finally emerges in a new land in the southern belly of Hammerfell.  Beyond the addition of the guild and the new land, known as Hew’s Bane, the expansion provides all new repeatable quests, skill trees, and a massive 12 man dungeon operation that is Elder Scrolls Online’s biggest and most grandiose adventure yet.

Elder Scrolls Online is one of the most disappointing and dull games that I’ve played in my time, but this expansion is by far the most successful in providing ESO with elements of gameplay that are an actual improvement over the dynamic presented in other Elder Scrolls games.  For the first time, ESO is expanding in the truest sense, introducing new gameplay elements that provide a team or solo challenge that feels fun and more like a personal achievement.

This is accomplished by taking away the typical button mashing aspects of the standard game, replacing battles with a series of stealth missions.  The bulk of the story missions, as well as the repeatable Heist missions, give you a sort of “area of theft” with patrolling guards or other people, and items you can use to hide in or behind.

The zones you have to navigate through are interestingly laid out and never boring, and the guards have a reasonable zone of sight and aren’t quite as stupid as guards in other games.  This whole new dynamic in ESO plays surprisingly similar to Metal Gear Solid games, particularly the PlayStation 4 titles.  This type of gaming with the fantasy backdrop is a nice change of pace, and by far this is the most realistic and intriguing version of theft ever presented the Elder Scrolls series.  There is a lack of battles, and this can lead to a lack of action in some ways, but the lack of action is often made up for by the introduction of suspense.

Hew’s Bane, the new land, is really nice as well, with a sort of rustic desert paradise-gone-wrong design.  The new map is quite large in size and has a lot of new landmarks to find and explore.  Not quite as spectacular in the visual sense as the Orsinium expansion, Hew’s Bane does more to provide an alternative type of place to explore as opposed to something grandiose.  The skill tree that you’ll be unlocking as you explore Hew’s Bane is going to make you a much better thief, but there isn’t a whole lot more to say there.  You’ll likely want to spend a few points in the process so as to make some of the more difficult tasks slightly less painful.

Lastly, this expansion adds a twelve man dungeon quest, dubbed “The Maw of Lorkhaj”.  A bruising gauntlet of powerful enemies in wave upon wave, the large team quest brings ESO another benchmark addition, this time for multiplayer.  A mode that demands teamwork and understanding of the enemies and your team unlike any of the past dungeons, “The Maw of Lorkhaj” also throws multiple large bosses and a huge dungeon area to explore at you along the way.  Pretty, often set in open areas, and varying in design as you move along, the dungeon can provide players with about an hour and a half of good gameplay, depending on your team’s skill level.

The Elder Scrolls Online: Thieves Guild is the most promising addition yet to the otherwise bland and repetitive experience the game has offered in the past. With a new take on common theft similar in execution to the Metal Gear series, and the addition of a rather unique new land and a massive 12 man quest, the Thieves Guild expansion is a must get for all hardcore Elder Scrolls Online players, and a more than welcome positive sign of things to come for newcomers to the series or those looking to return to Tamriel.

Patrick Rost has been with Gaming Trend since 2013. At first focused on sports coverage, Patrick has gone on to cover a wide range of games and other products for the website. Outside of Gaming Trend, Patrick writes and records music, grinds perpetually in Elder Scrolls Online (PS4), and lives day to day with his two dogs, Bob and Stella.
Related Articles: Elder Scrolls Online: Thieves Guild
Share
Tweet
Share
Submit