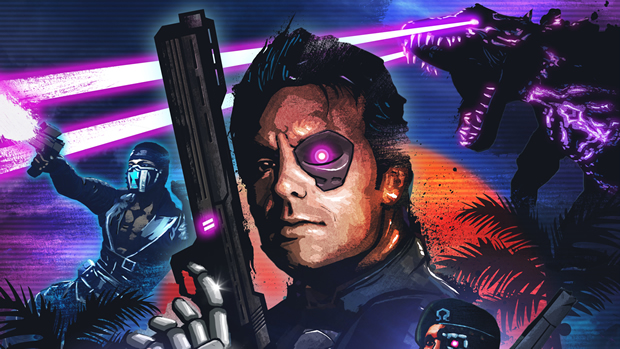 Nostalgia’s a hell of a thing.

The pink neon lights, the synthesizer-drenched tunes, the hammy voice acting — all of these things convinced me that Far Cry 3: Blood Dragon was one of the best things I’ve ever played.

After I’d finished my four-and-a-half hour romp through Ubisoft’s retro-future vision, I sat and stared at the title screen, reflecting on my time with the game. The more I thought about it, the more I realized that underneath the scan lines and 1980s references, the actual gameplay is disappointingly rote.

Aesthetically, Blood Dragon is brilliant in its adherence to its source material: 1980s schlocky VHS action flicks.. It’s what a video game from an alternate universe would look like — if that universe were a place where Reaganomics actually worked, we were still at war with the Russians, and action films never evolved from being more than over-the-top male power fantasies. Set in the year 2007 (“the future,” according to this world), one man is hell-bent on bringing about another apocalypse to go with the one Earth’s got going on already, and it’s up to Sergeant Rex Power Colt to stop him.

Right from the word go, Blood Dragon turns on the cheese. An old-school style cutscene, reminiscent of old NES or VGA style sequences, introduces our incredibad storyline — and the tone continues this pace right up to its conclusion. Everything in this world is cyber — cyber-soldiers, cyber-war, cyber-snakes — and covered with a generous heaping of neon and chrome. Michael Biehn snarls his way through some of the worst one-liners ever written, and the soundtrack by PowerGlove feels like every crappy 80s movie soundtrack wrapped up into one (it’s awesome). All of this, however, is done with tongue firmly in cheek — Blood Dragon revels in its awfulness. Some of the jokes fall flat (“Use fast travel to travel fast.” Get it???) but I found myself laughing more often than not, both at the flavor text buried in the menus, as well as some of the most entertaining reload animations I’ve ever witnessed.

However, it’s a shame that the overall mission design doesn’t live up to its own goofy aspirations. There are only a handful of main missions, most of which require you to sneak or blast your way through various enemy facilities, with the occasional “plant the bombs” mission thrown in for good measure. Side missions (which are all but necessary to stretch out its rather brief play time) involve the same kind of stuff you’d expect in Far Cry 3 — liberating garrisons, hunting cyber animals, killing one specific soldier with a specific weapon, or rescuing a scientist from armed guards.

The same open-world freedom that was available in Far Cry 3 is here — scaled down to bite-sized DLC, of course. You’re given a lot of agency in regards to how you approach each combat scenario — sneaking around or brazenly attacking your foes are both equally viable and entertaining strategies. It’s still really fun to run around the jungle, stalking your prey and unleashing fury upon your enemies, and Blood Dragon makes it a point to give you some incredibly high-powered abilities right away. There’s no choice in what skills you get to pick — you’re awarded various powers as you level-up — and virtually all of the skills and weapons feel ripped from Far Cry 3. You throw a ninja star instead of a knife, and can blast away with a quad-barreled shotgun that fires explosive rounds, but at the end of the day, a neon-encrusted bow is still a bow.

The eponymous blood dragons help to change the pace of the game somewhat. As you’re roaming the jungle, you’ll notice these giant neon lizards roaming around. Their eyesight and hearing are terrible — crouching around them will prevent them from finding you — but they’ll try to vaporize any movement they sense with their eyeball laser beams. Luckily, you can use the cyber-hearts (yup) from fallen enemies to lure them toward unsuspecting guards, or unleash them upon an entire garrison of cyber-soldiers. It adds an extra layer to the combat, sure, but the dragons tend to be a nuisance more often than not, as you’re more than capable enough to take out an entire platoon of troops with your incredibly powerful arsenal of weaponry and combat skills.

A few surprises are in store — a rather exciting weapon and some interesting set pieces that I don’t want to spoil — but as the final mission starts to reach a fever pitch, it’s over. Just when I thought I was about to reach some epic boss battle, the game throws the final cutscene at me. Fade to credits. I stared rather flabbergasted at the screen at this point, wondering if I was being tricked — but no, the final sequence I desperately craved never came.

Blood Dragon never truly takes advantage of its own insanity. The over-the-top aesthetic seems to permeate everything — the graphics, voice acting, soundtrack, weaponry, environment, and so on — and yet, underneath all of that, it’s still just more Far Cry 3. There’s nothing inherently wrong with that — Far Cry 3 was a fine game — but there’s a rather jarring disconnect between the world that they’ve created and the all-too-familiar gameplay that’s on offer here. Ubisoft should be commended for creating this crazy world — it’s just a shame that the gameplay doesn’t live up to its own premise.