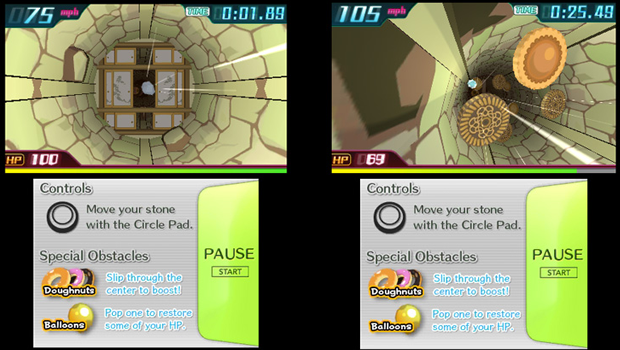 Have you ever experienced the unique pleasure of dropping assorted items from a high-up location? Chances are, you probably have. This is a basic human urge we’re talking about – people like to throw things, preferably from high up spaces, the higher the better. I certainly have this going on, which is why my sole regret after visiting the Hoover Dam was failing to bring a few fistfuls of pennies to hurl off the edge of the thing. Anyway, for those of you who have heretofore been denied this pleasure – maybe you live in the American midwest, which maps inform me are composed entirely out of flat rectangles – I have some good news! Poisoft’s Kersploosh! for the Nintendo 3DS not only allows you to experience this pleasure easily, not only does it for a thankfully reasonably price tag of $2.99 USD, but does all this while allowing you to hurl more exciting objects than pennies. If the prospect of throwing a russian nesting doll down a well filled with pizza and cookies sounds like a good time, then get this game because it’s practically made for you personally, you unique person you!

Kersploosh! is a game that really feels like it knows what it’s doing – giving you a fun, easy-to-get-into thrill with a minimal amount of intellectual investment. While there’s a modicum of entertaining story here and there (amusingly presented), you’re not going to experience any Katamari Damacy kind of grand, depthful narrative during your gameplay. You’ll get some amusing moments, and then it’s right to the fun of dropping items down the wall, attempting to reach the bottom as fast as you can while avoiding obstacles. There’s a variety of items to drop down the well, and the differences between them are more than merely cosmetic – there’s a performance difference between them as well, with differences in item power, fragility, and speed all playing a factor in the game. Considering time is a major factor in these challenges, those stats actually play a major role in determining the game’s difficulty.

[singlepic id=11045 w=320 h=240 float=right]The actual experience of these levels is very well-crafted. I’m normally not a big fan of the 3DS’s stereoscopic 3D aspect, but that’s a feature that Kersploosh! manages to take advantage of to full effect. The well ‘tunnel’ you fall down ends up seeming almost tangible thanks to this effect, so kudos to whoever worked their graphical magic here. The levels themselves are relatively short to get through – say 60 to 90 seconds on average, assuming you manage to make it to the bottom. That may seem short, especially considering there’s only ten levels to unlock in the game, but if you end up liking the game enough to go back and replay the levels, it turns out to be a nearly perfect amount of time – just great for fitting in a short burst of excitement when you have some time to kill.

[singlepic id=11044 w=320 h=240 float=left]There was something about the environment and art direction in this game that was relaxing to me. Graphically, the game isn’t really treading any new ground – if I had to speak in sheer terms of graphical performance, I’d call the game average with some nice attention to detail when it comes to collisions inside of the well. Everything was pleasant to look at, easy on the eyes, and generally easy to follow – one exception being when going through the donuts in the well in order to pick up additional speed. For a split second it feels like those things are just blindingly large and take up too much screen real estate, momentarily distracting you from the oncoming obstacles. Still, this ended up being at best a minor complaint rather than a major distraction during the game – blasting through the levels ultimately wasn’t hampered much by those moments.

[singlepic id=11042 w=320 h=240 float=right]Speaking of blasting through the levels, Kersploosh! is a little bit light on actual content – there’s a variety of levels/wells to ‘fall down’ and items to do it with, but a skillful player can blast through the entire course of the game in under an hour. After that, it’s a question of whether you enjoy the game enough to bother going back to already-defeated levels to give them a second playthrough. Personally, I can see myself going back and giving these wells a fresh go every now and then – it’s very easy to get into fun, and works as a timekiller after it’s been played to ‘completion’. If anything, the problem is that ‘timekillers’ happen to be in abundance nowadays – chances are you’re more likely to turn to your cell phone apps before you’ll come back to Kersploosh! after you’ve beaten it. On the other hand, it really is a fun, charming game the first time around, and at $2.99 it’s an easy to justify purchase for someone who wants a refreshing bit of fast fun on their 3DS.