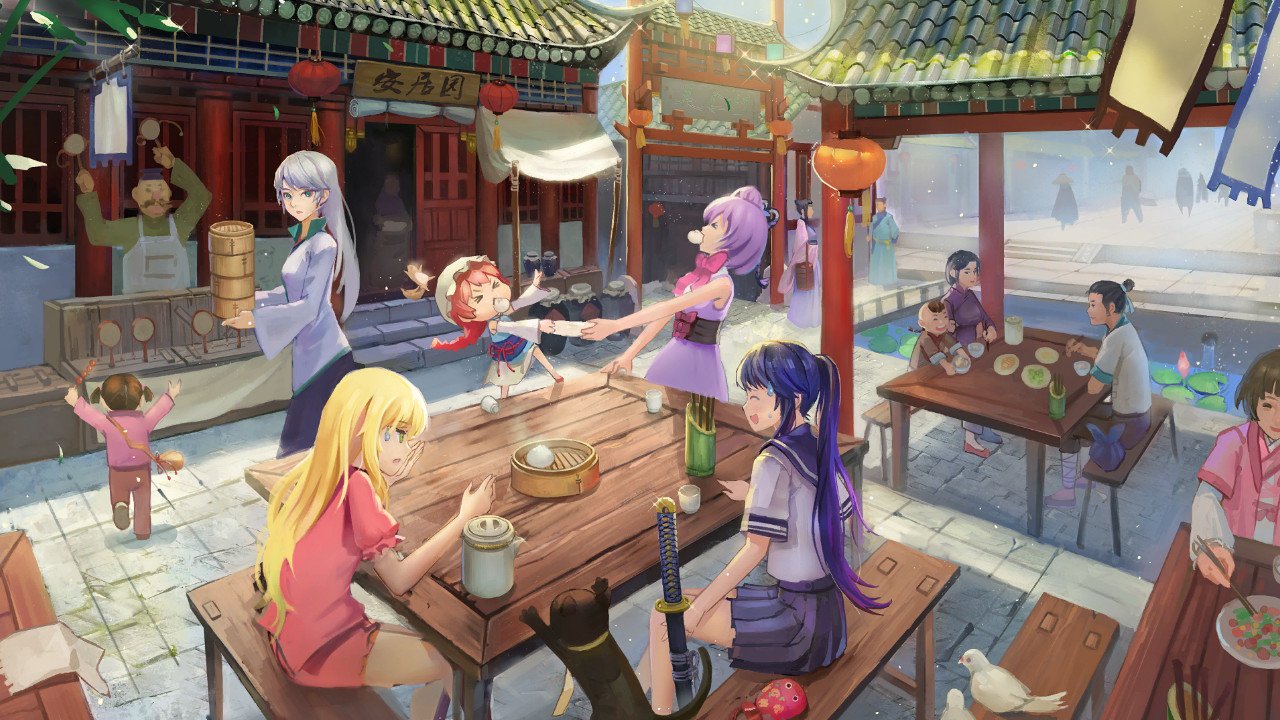 As much as I love Super Mario Odyssey and FMV titles on the Switch, rhythm games still rock my world on the handheld hybrid. Even after eight months, I still fire up Superbeat: Xonic to play a few rounds on my downtime. Of course, this was just to whet my appetite for PM Studios’ next Switch release, Musynx, which aims to be another musical hit on the console. While the game does have a few problems with presentation and overall features, it’s still a lovely upgrade from its original mobile incarnation.

Missed Mermay by about a month…

Musynx drops you into the fray from the get-go: after the game loads up from your Switch menu, it goes straight to the songlist with no tutorial or startup phase. There IS a loading screen that pops up, but it’s easily missed. While this works for a mobile game, I would rather have some sort of title or mode selection that I can navigate. From here, you can access the songlist or a “Welcome!” shop that currently has nothing in it (though PM Studios has promised that we’ll receive free DLC in the future). The presentation looks slick but barebones, with a glut of tracks to choose from but a user interface that feels limited and confusing. While games like Voez had a rather overwhelming UI when navigating songs, at least you could choose favorites and sort them by things like difficulty. Here, they’re grouped by theme (more on this later), with the option to choose from easy or hard mode (complete with different background pictures). For what it’s worth, the initial presentation looks great, but the UI leaves a lot to be desired.

Gameplay itself is as no-frills and simplistic as a music game can get, but in the genre, this is a good thing. You have either four or six keys (that are readily remappable) that you must hit in time with the beats that come your way. You might also need to hold them, which is indicated by notes that have solid fills between them in the lanes. Timing goes from exact to miss, and at the end of each song you’ll receive a grade depending on how well you did. In true music game fashion, you can beat A and go to EX if you’re so inclined. That’s basically the gist of Musynx, but the difficulty will ramp up during your playtime, especially with more difficult tracks in six key mode.

You can use either the touchscreen or buttons in this game, and unlike PM Studios’ last release Superbeat: Xonic, both schemes work perfectly. Due to the placement of the lanes (think more DJ Max or Beatmania where it’s a static line rather than a round playing field), using a touchscreen feels much more comfortable. Pressing the screen on the go feels great, even if it might take a few songs in order to acclimate yourself to the intense rate of notes flying to your screen. When playing handheld mode, there was no lag (which is crucial to music games), and my touch inputs felt like they had weight to them.

I was surprised that I didn’t have to disobey directions this time around.

However, I ended up using buttons for most of my playthrough, as this game feels more suited for controller play. There’s this tactile feeling that buttons provide in a music game that brings me euphoria, and it’s much more satisfying to hear your button presses in time with the music compared to touch inputs. Musynx nails the gameplay square on its head, and its simple mechanics add to the accessibility of the title.

The music, which is quite literally the crux of music games, is an eclectic mix of electronic beats and more lighthearted fare. With almost every Asian music game, the songs here will hardly be recognizable to anyone that isn’t in the music game scene, but there’s enough variety here that you’ll find a track that you’ll grow to love. It also helps that each track is a blast to play, even if it’s not something to which you wouldn’t normally listen. Indie game lovers will also get a kick out of the fact that games like Koi and Icey have tracks within Musynx, and there are a ton of tracks that utilize Vocaloid software (the box art for the limited edition launch version includes Chinese Vocaloid Stardust, for example),

The graphical presentation of the game is also pretty slick. There are different backgrounds and interfaces you can experience, from rainbow-themed lanes to a calligraphy-inspired lane with ink blots, even venturing into a pixel art style filled with mascot characters. The different themes are unique and add to the personality of Musynx, but I just wish there was a way to choose which theme you could play on rather than it being predetermined. Also a small quibble, but some themes have different languages that obscure the combo and timings, which is distracting and I’d rather have localized interfaces for all the languages represented rather than just for a group of songs only.

Some of the backgrounds look GORGEOUS.

There are still quite a few issues that make Musynx a little hard to universally recommend. As aforementioned, the overall UI for music selection is quite limited, and there are currently no modes other than the main one. While a lack of multiplayer modes are usually okay, the fact that there isn’t anything that encourages progression as of now is a bit disheartening. Even games like Hatsune Miku: Project Diva Future Tone, which made all of its songs available to play after buying in-game DLC, had costumes that required player points to unlock and change into. While the in-game shop promises potential on this end (as one of the selling points is “free song updates!” so in-game currency might be implemented), as it stands, there isn’t too much unlockable content here. With nearly 100 songs available at launch, it can be a chore to navigate without a sorting or playlist option. The first time you move around the mix of songs, it’s pretty cool; the fifth time? Not so much.

While simplistic in its mechanics and slightly generous scoring, Musynx might be a little too difficult for newer music game players. I acclimated immediately to harder four key and six key songs, but there isn’t too much complexity for those that pick this up as their first music game. It also doesn’t help matters that the game doesn’t even include a tutorial at startup, which would be a great tool for beginners to get to know the ropes. It’s a shame that there aren’t robust practice options as well, since it would help with trickier portions of songs. There’s no doubt that we’ll see improvements in later updates, but I would rather play something like Super Beat Sports or even easier difficulties of Superbeat: Xonic for a more accessible challenge.

Musynx is a solid addition to music games on the Switch, with some infectious songs and slick presentation. While limited in other aspects and not too beginner-friendly, this is a game that veterans and those wishing to improve their music game library should try.

Elisha Deogracias is an aspiring accountant by day, freelance writer by night. Before writing for Gaming Trend, he had a small gig on the now defunct Examiner. When not being a third wheel with his best friends on dates or yearning for some closure on Pushing Daisies, he's busy catching up on shonen manga and wacky rhythm games. Mains R.O.B. in Smash. Still doesn't know if he's a kid or a squid.
Related Articles: Indies, Musynx
Share
Tweet
Share
Submit