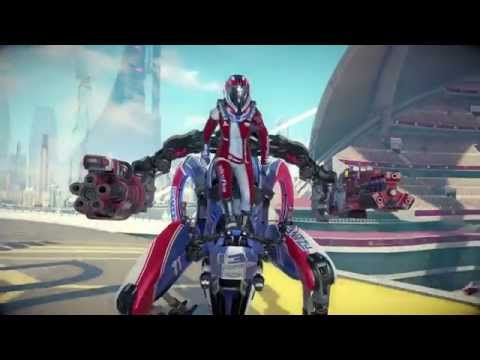 If there’s a better use for virtual reality than giant stompy robots, I’m not sure what it’d be. While I wait for an M-rated full-on mech simulator, games like RIGS would have to fill the void. Reminiscent of Zone of the Enders 2 and Gundam, RIGS: Mechanized Combat League from developer Guerrilla Cambridge offers up high-speed robot action from a first-person perspective. Part sports title, part shooter, is it possible that RIGS is the first mainstream must-have virtual reality multiplayer game?

RIGS is fundamentally a class-based shooter. Offering up Rig archetypes to match player preference, the game features four chassis from which to customize. Hunters are your faster class, not unlike a lightly armored scout with its hit and run tactics. Mirages are a more balanced class and have a double-jump capability, which becomes important when the map is multi-tiered. Sentinels are your heavies, built around solid armor and defensive capabilities. Tempests are able to fly above the fray, pummeling foes from the sky. With your archetype selected, you’ll next pick your class.

In total, there are twenty mechs to choose from, divided across five main types that serve as the ‘classes’ for the game. Engineers can repair friendly Rigs and shut down enemy radar, Vampires repairs armor with the rigs they destroy, Carapaces have an additional armored plate on their rear to act as a shield, Nuke explodes when destroyed, doing damage to friend and foe alike, Thief can snatch the ball from the air at longer range and are invisible to radar in Turbo mode, and Knockout has a melee attack that disables enemy power modes for a short time.

The maps are slick, angular, and gorgeous.

Class in hand, you can now select your weapons. There are a total of four mechs in each class, giving you options to match your playstyle. Most class-based shooters start to feel the same after a while, but with this many combinations, there’s enough to keep any would-be pilot busy for a while.

There are three modes to tackle in RIGS — Team Takedown (read: Team Deathmatch), Power Slam, and Endzone. Power Slam has players collecting orbs for kills, eventually culminating in Overdrive which allows them to zip through a large hoop in the center of the map to score — like some sort of augmented Harry Potter-esque robo-Quidditch where your Rig is the Quaffle. Endzone feels like a combination of American football and keep-away. Each match in Endzone has a 10-minute countdown clock, so there is always forward pressure being applied, but not so much that it feels too frantic.

Completing matches, whether against the AI or against real foes online, yields cash. These monetary rewards can be used to unlock new rig classes, weapons, emotes, and cosmetics. After just one match I had almost enough to purchase another mech, so the grind isn’t bad at all. Fret not, however, the game doesn’t devolve into a pay-to-play model or a grind as there are no microtransactions to be had here. The fans you gain through wins and sponsorships unlock higher competition tiers, creating a career progression system that was deeper than I anticipated.

Kicking off the game is a rather lengthy half-hour tutorial that gives players an overview of how the controls operate, as well as the movement mechanisms needed to play the game. You can use head movements for targeting and the left stick for movement, or you can use the right stick to create independent movement between your chassis and its legs. I found the latter extremely disorienting and had to quit playing just moments after trying it. When your chassis is destroyed, you are ejected. You can choose the fade-to-black respawn, or you can watch the whole ejection cycle — another option for VR comfort. Neither of these bothered me, so I stuck with the full ejection cycle so I could keep an eye on the arena action.

Once in the arena you’ll square off against AI opponents or real-world friends and foes in the three aforementioned modes. As you zip around the map you’ll have three modes to employ in battle that’ll mean the difference between success and failure. All rigs have a speed boost, a damage boost, and a repair mode. You can only employ one at a time, so flipping between the three depending on what you are doing is key. Picking up three kills, however, opens up Overdrive. Overdrive enables all three modes at the same time, granting a great deal of offensive, defensive, repair, and speed capabilities.

Once you’ve taken the ring, you can earn sponsorships for online and offline play, grow your fame and fortune, and climb a professional sports league bracket like you’d find in any of the three-letter sports agency games. Sponsors offer challenges such as earning an MPV in a game, meleeing a foe three times, or taking down the whole team without ejecting as examples. The rewards for completion can be extra cash or extra goodies like a new helmet or uniform. Unlike real sports, changing sponsors frequently is encouraged, offering additional bonuses for switching them out. All things considered, if a full campaign is your jam, RIGS has it nailed.

In both online and offline play, the game is set up as a ‘season’. Completing a match earns you fans and cash, both of which are needed to hire better AI-controlled teammates. The first set is free, but subsequently higher-ranked AI teammates demand a larger slice of the pie. It offers up the feeling like you are building a crew that grows with you.

There are a few things about RIGS that gave me fits — the voice repetition struggle is real as the announcer swings from overly excited to concerned like a pendulum. The stock phrases are exciting the first few times you hear them, but it does wear thin pretty quickly. Similarly, the long load times and slow ascent into each arena also begs for a “press X to start the damned game already” sort of option. Similarly, when the match ends you’ll get to watch the same canned celebration animations with no option to blitz past them.

Stompy bots from first person perspective is a blast.

The biggest concern I had with RIGS was realized fairly quickly after my first full match. I absolutely dominated the AI, secured an MVP spot, and immediately felt sick. The movement in RIGS takes a little getting used to, and I’ve only been able to play at most a match or two in a row before I need to drop out. The good news is that I feel like I’m slowly acclimating to it, but it’s not without discomfort.

RIGS is a fantastic foray into high-speed sports-like mechanized combat, and a great use of virtual reality as it realizes our giant robot fantasies. The long loading screens, canned animations and repetitious voice work aside, RIGS brings a lot to the table. From a fully-baked progression system, to gorgeous graphics and fast-paced and balanced play, it’s an exciting sports title. I just hope the nausea factor subsides quickly.

Ron Burke is the Editor in Chief for Gaming Trend. Currently living in Fort Worth, Texas, Ron is an old-school gamer who enjoys CRPGs, action/adventure, platformers, music games, and has recently gotten into tabletop gaming. Ron is also a fourth degree black belt, with a Master's rank in Matsumura Seito Shōrin-ryū, Moo Duk Kwan Tang Soo Do, Universal Tang Soo Do Alliance, and International Tang Soo Do Federation. He also holds ranks in several other styles in his search to be a well-rounded fighter. Ron has been married to Gaming Trend Editor, Laura Burke, for 21 years. They have three dogs - Pazuzu (Irish Terrier), Atë, and Calliope (both Australian Kelpie/Pit Bull mixes).
Related Articles: RIGS: Mechanized Combat League
Share
Tweet
Share
Submit